We’ve been earning a long time at Miles & More. And there it is always a good time to look at the side of mileage snippets to be inspired for a weekend destination. When we saw that Stockholm was on the list, we slammed and booked for the last weekend of July.

Our flight from Frankfurt to Stockholm

With mile bargains, however, there was only one economy place available on our desired connection, so we had to “fly” business class – there’s definitely worse 🙂 Our Lufthansa flight departed friday afternoon at 4 p.m. Since we were at the airport a little earlier, we tried out the Lufthansa Business Lounge in Terminal A. It is very nicely designed, offers all kinds of seating and a corresponding catering offer is also available. From potato salad & schnitzel, cakes & croissants to gummy bears & salt bars – there’s something for every taste. After we had eaten our way through the buffet, we walked to the gate and waited for the boarding. About 200 other people have done the same with us – the plane was packed. There was even a waiting list. With 30 minutes delay we finally started – Stockholm we are coming!

The approach to Stockholm alone looked magnificent. Between Norrtälje in the north and Nynäshamn in the south are no less than 30,000 islands and islets – the Stockholm archipelago. 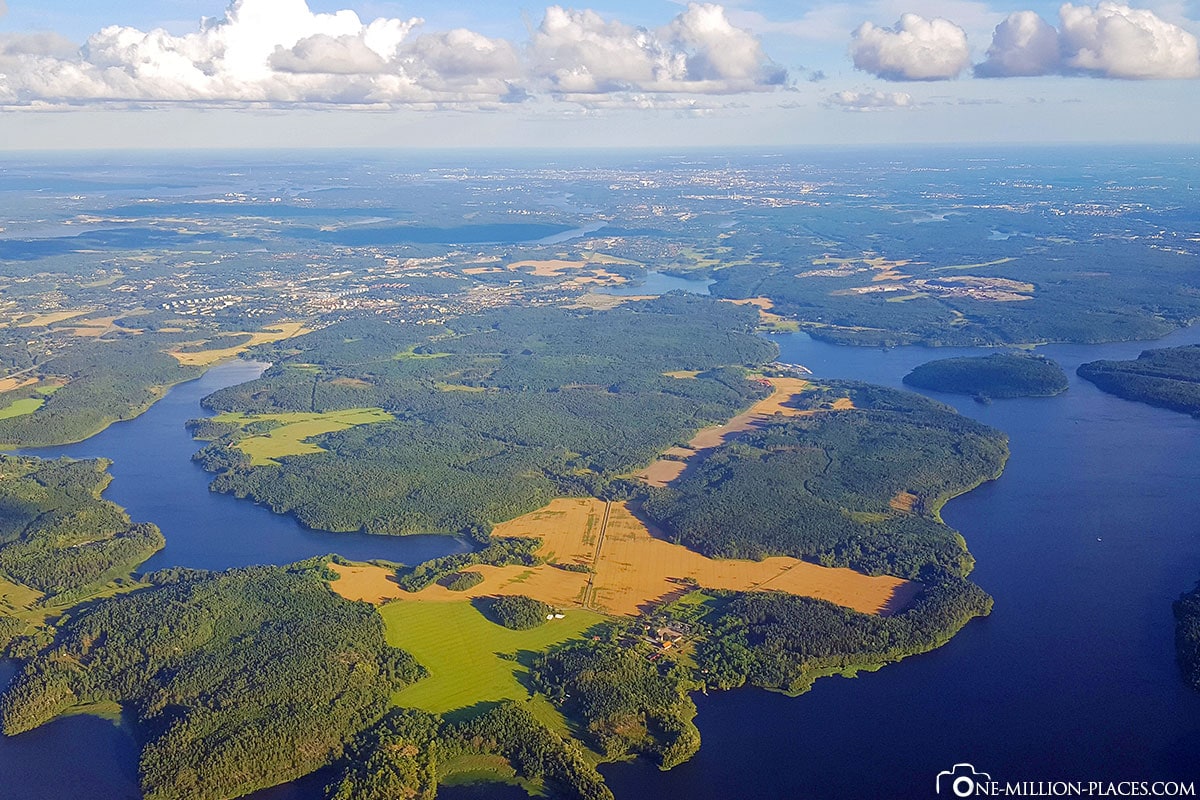 The approach to Stockholm

By bus from The Floghafen to the city centre

After about 2 hours we landed in Stockholm-Arlanda. Since we were sitting at the front and had no luggage checked in, we were super fast outside and could jump straight into the grey-silver coach of Flybussarna, which was right in front of the terminal and was supposed to take us to the city center. We had already bought the tickets for the bus ride on the online site flygbussarna.se for 99 SEK per way/per person. You can also buy the tickets on site at the vending machine, but online they are a bit cheaper.

There are a number of other alternatives to getting to the city centre, but this is probably one of the cheapest and easiest. The bus leaves every 10 minutes from Arlanda Airport to the city centre, so you never have to wait long. Travel time to the city is about 40 to 45 minutes. The final stop is directly at the main railway station. From there we reached our hotel within a 5-minute walk.

Our hotel in Stockholm

We spent two nights at Hotel Central. The location of the hotel is great. It is only a few minutes’ walk from the train station and the inner and old town. The hotel looks a bit old-fashioned from the outside. But as soon as you get to the reception, it looks a little different. There is a small cosy lounge area with a sofa and armchairs, as well as free all-day coffee, water, apples and biscuits. The reception staff were very friendly and accommodating. We had a room on the 5th floor overlooking the courtyard. So you didn’t hear street noise at all. The room is relatively modern. A PVC floor with parquet look makes it homely. A major drawback is that there is no air conditioning. With sunny weather and mild nights it gets a bit unbearable in the room. Unfortunately, there is no refrigerator either. The TV is large and swivelable. The double bed consisted of two single beds, which were very soft. Unfortunately, the room is a bit bright. We heard it, for example, when the mobile phone vibrated in the neighboring room. The bathroom is spacious in terms of area. Shower products such as shower gel, shampoo and body lotion are provided. The corner shower has two swivel glass doors, which unfortunately lacked the sealing rubber, so that half the bath was submerged. Why no one fixes this is a mystery. The wifi is free and worked perfectly. The included breakfast is available daily between 7am and 11am in the French restaurant “Gare”, which is right next to the hotel. The selection was great – there is something for every taste.

After we had checked in and had put our belongings in the room, we left again to get a first impression of the city.

What to see in Stockholm

The next morning the alarm clock rang already at 8 o’clock, so that we can also have something of the day and see a lot. After we had strengthened well at the delicious hotel breakfast, we could start in bright blue skies and sunny weather. We had already picked out the most important points that we all wanted to see.

The first port of call was the Stockholm City Hall (“Stadshuset”), which could almost pass as a church from afar. At the foot of the town hall, many boat trips start, so that some tourists were already on the way here. Many locals also sat on the shore and threw their fishing rods into the water to catch one of the many salmon. Our path led us along a promenade along the shore until we reached the old town island “Gamla Stan” via a bridge.

The old town is littered with cobblestones, narrow streets and countless small shops. There is something to look and discover at every corner. On the larger squares, cafés and restaurants have set up their tables and invite you to linger and sit in the sun. We were a lot of other tourists on the way.

In the old town is also the Parliament House.

The changing of the guard at the Royal Castle

The highlight of every day is the changing of the guard,which takes place at 12.15 p.m. at the Royal Palace. In the summer months, however, the military parade and chapel marches a little earlier at the Military Museum, moves through the city and arrives punctually at the castle, where the changing of the guard – surrounded by hundreds of tourists – takes place. The chapel also played a few songs, including the melody of A-Team 😉 The whole spectacle lasted about 45 minutes. After a few seconds, the castle forecourt was like a slackened and the tourists were swarmed again in all directions. A good opportunity to take some photos of the castle.

Afterwards we walked along the shore – past the Royal Opera House and the many ship-setting locations. Unfortunately, it started to rain here, so we had to insinuate ourselves a little bit. From the small island “Skeppsholmen” one had a quite good view of Stockholm’s old town.

Afterwards we went back through the old town towards the city centre. The largest square “Sergels torg” is the point of contact for many locals and tourists, as it is home to the cultural centre, a large shopping centre and many other shopping opportunities. The shopping street “Sergelgatan“, where a non-violence sculpture can be seen, also starts here.

Many know the knotted weapon,which is seen as a symbol of truce and non-violence, from New York, where it can be found in front of United Nations headquarters. In the meantime, however, there are also copies of this in many major cities – as well as in Stockholm. The shopping street leads to the blue-painted concert hall, in front of which there was just a small weekly market.

After we had eaten something, we slowly walked back to the hotel. We estimate that we have run safely 20km today – at least our feet feel like this 😉

The next day Stockholm welcomed us again in the best weather – blue sky, sun, a few clouds. It couldn’t be better – especially with our current goal: the open-air museum & animal park “Skansen“, which is located in the western part of the Djurgérden peninsula. After breakfast we walked to the tram stop “Kungsträdgérden” and got on line 7. By the way, this is Stockholm’s only tram line. The rest of the public transport means are metros and buses. A single trip costs 36 SEK. Since the ticket machine no longer had any paper, the nice tram employee let us ride with us free of charge. After about 15 minutes we stood in front of the main entrance of Skansen: it was only 10.30 a.m. and until our departure at 7 p.m. we still had enough time.

The park was opened in 1891 and was intended to bring the Swedish people closer to their own folk culture, or to secure and preserve it. For example, about 150 buildings from all over Sweden were brought to the park grounds: from farms, houses and churches, to a school, windmills and huts. This was the only way to ensure that typical “real” buildings with their Scandinavian wooden architecture and matching furnishings can be found in the park. In the village of the park you will also find real historically furnished shops, where the old craftsmanship is shown and also sold afterwards (glassblowers, potters, bakers, etc.). Fittingly, there is also an animal park,which is intended to bring visitors closer to the wildlife of Scandinavia. About 300 animals are at home here – from bears to moose to reindeer. We spent a good three hours in the park, sat down on one of the several parking banks and enjoyed the sun.

Over the original main entrance “Hazeliusporten” we left the park and walked again towards the city center. Since the weather was still great, we wanted to walk along the water instead of using the tram. The scenery here reminded us a bit of Hamburg. We then went back to the hotel at the Kungsträdgérden, so that we could get our bus to the airport in time.

Our plane returned to Frankfurt as scheduled at 7 p.m. It was a nice weekend in Stockholm and even though it was only two days, it was like a bit of a holiday 🙂

Stockholm has several Starbucks stores and also its own cup 🙂

The Starbucks City Cup of Stockholm 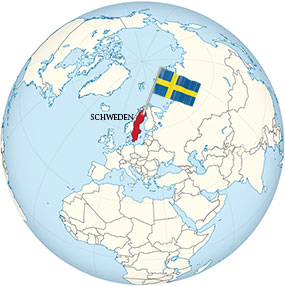