The visit of the Komodo Dragons on Rinca Island in the Komodo National Park we had prepared for the last day of our holiday, because we could not dive today anyway. Ideally, there should be 24 hours between the last dive and the flight and we always try to keep that.

The Komodo National Park was originally built in 1980 to protect the Komodo Dragons and covers the islands of Komodo, Rinca and Padar, as well as some smaller ones. It has been a UNESCO World Heritage Site since 1991 and is also used for the protection and conservation of all flora and fauna.

The boat trip to Rinca Island

Through our resort we had booked a trip to Rinca Island in the Komodo National Park. We had previously considered whether we should go directly to the island of Komodo. But there were two advantages for Rinca:

With us another couple from France had registered for the excursion, so that it started at 7.30 o’clock in already great sunshine for four. The sea is insanely calm in the area between the islands of Komodo, Rinca and Flores, there is hardly a wave. All the better, so we were not afraid to become seasick. The boat trip passed many beautiful islands – some consist only of one mountain, some are surrounded by green mangrove forests or a small fishing village on stilts. There was always something to look at – at the latest when the first dolphins showed up in the water.

The entrance to the National Park

Since there are currently holidays in Indonesia, many locals were on the way, so that we could safely count 20 to 30 boats on arrival at the port of Loh Buaya. Foreign tourists, on the other hand, are not found here. This region of Indonesia seems to have been relatively spared from mass tourism, which may look different in a few years’ time.

From the harbour, a small jetty goes through an entrance gate to the actual entrance to the park, where you will find the national park administration, the cash register, the houses of the rangers and a café. And besides the path we could already see the first two warans here – lazy lying under the trees. After some time they even moved a bit, so that you could see them in their full splendour. Warans are not very pretty animals, but rather look scary. No wonder they are also called dragons. They are a bit reminiscent of primal animals – with the scaly skin, the snake tongue and the massive body.

The circuits through the national park

A short time later we were greeted by a local guide who was to walk with us for an hour through the national park. In total you can make 3 different hiking routes on Rinca. A long circuit (3 hours), a medium (approx. 2 hours) and a short (approx. 1 hour). Other guests of our resort had chosen the middle circuit a few days earlier, and had told us that they had seen nothing but a few monkeys and a chicken. There’s always a bit of luck there, of course. Due to the heat and after consultation with the ranger, we decided on the short circuit. Due to the danger of the animals, it is not allowed to walk alone through the park. All rangers also carry a 2 m long wooden stick forked at the top, with which one can protect oneanother in the event of an attack. 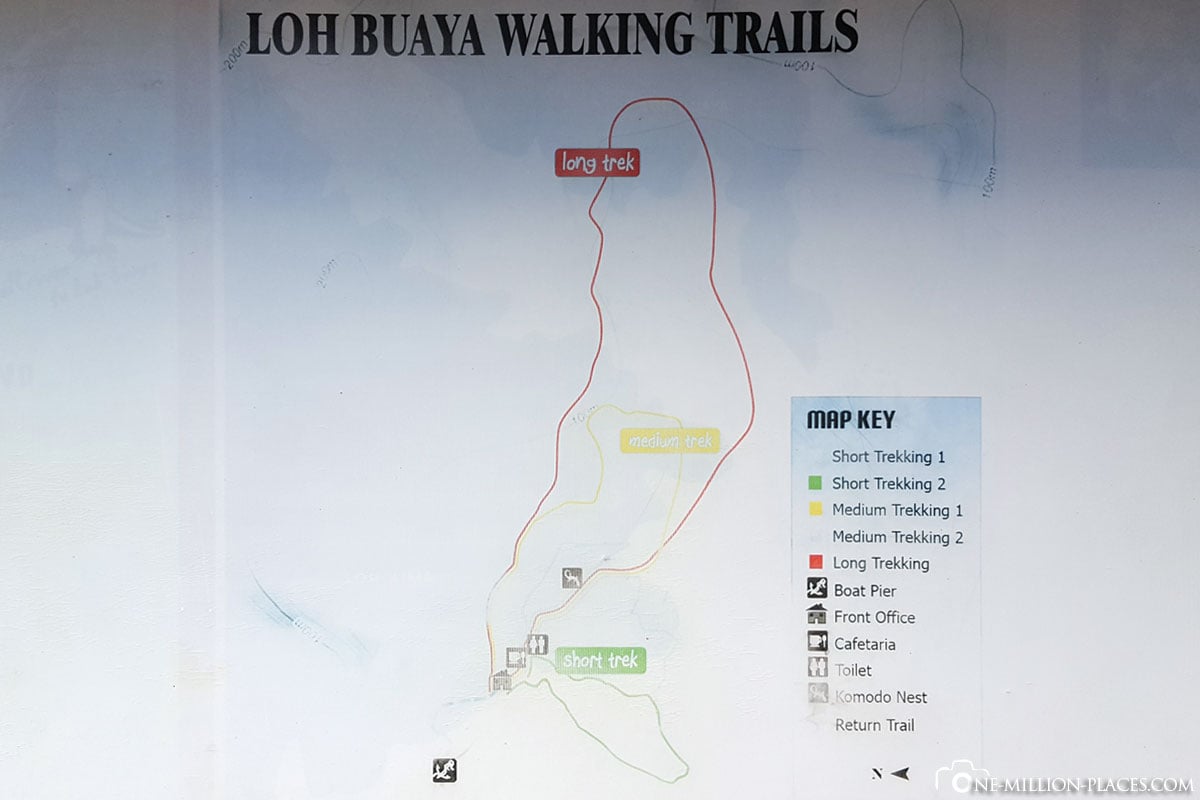 The Komodo Dragons on Rinca Island

After a few meters we saw another seven Komodo Dragons lying under and next to a ranger house. Our guide told us that the warans are more likely to be active in the early hours of the morning and then retreat and rest in the heat. We can’t quite believe it. Presumably they are simply fed and are just waiting for their next meal next to the houses. You don’t want all tourists to go home disappointed because they haven’t seen any wares. Well, you don’t know. Every now and then some have lifted their heads so that you could look them in the eye.

After we continued our way, it went a bit into the forest and it didn’t take long until we saw an active waran female trying to swarm out a bird’s nest. Really fascinating.

The big-footed chickens and the warans share a nest. Our guide told us that the chickens lay their eggs at a depth of 1 meter and the warans at 2 meters depth. The waran female has now tried to swarm the eggs of the chickens to eat them. The two chickens, however, tried to defend their nest and faced the waran to re-energise the nest with their small feet (only in the beginning). It looked really funny 🙂

The following path through the national park is not very exciting. But then we went up a small mountain, from which one had a great view of the bay, where we arrived. The hot-tropical weather is a bit of a worry – you can’t get out of sweating. In the last days on the submersible you didn’t notice this at all, because you always had a pleasant wind and in between jumped into the sea again and again.

After a good hour we passed the Rangerhäuschen again and saw a little baby-waran, who was a maximum of two years old. Our ranger tried to lure a waran out of his hiding place by imitating bird noises… and that really worked quite well. The waran has set in motion and has run in the direction of rustling and noise. When he lay down, it was a great opportunity for us to take some photos up close with the Waran – a great experience, considering that there are probably only 4,000 copies of this kind left.

After the spectacle we 4 went back to the boat and towards the resort. On the way back we made a little snorkeling stop at a beautiful island, picnicated on the beach and then arrived in the afternoon again at our Angel Island Eco Resort.