This morning we slept a little longer, had breakfast late and then strolled a bit along the main street Malioboro in Yogyakarta.

In this neighborhood you can see especially many tuk tuks (often with sleeping drivers), some horse-drawn carriages, scooters,souvenir shops and many small food stalls.

But also a big new shopping mall can be found here (Mall Malioboro) with restaurants and some shops. There is also a modern supermarket here, which actually has almost only Western goods, and is therefore probably priceless for most locals.

Train tickets from Yogyakarta to Surabaya

Around 3.30 p.m. we drove to the nearby Yogyakarta-Tugu station. Our Argo Wilis train was scheduled to depart for Surabaya at 4 p.m. We had already bought the train tickets for this yesterday directly at the ticket office of Kereta Api (Indonesian state railway company) at the station. You first had to draw a number and fill in a form containing the personal data as well as the desired train route. After you were called, you had to show your passport and then we could buy the tickets. For the 308 km long route to Surabaya we pay in the better train class Eksekutif only 14 euros per person.

The journey by train from Yogyakarta to Surabaya

Only people who have a train ticket enter the station building. In front of the tracks there is a waiting area with free Wifi (the Deutsche Bahn can cut off a disc). The gates to the track are opened just before the train enters. The train was quite full and the journey took just over 4 hours. A lot of time to read a book or sort pictures.

Our Hotel in Surabaya

We arrived in Surabaya at 8.20 p.m. In front of the train station there were 100 taxi drivers and everyone offered you the best price. When we found a taxi, we went to our hotel Favehotel Mex and went for a bite to eat.

We spent a night in the hotel. It is well located – next to it is a small supermarket, in 5 minutes you can reach a shopping center. The area is a bit noisy. The room is small, clean and modern. It is a bit of a pity that the curtains could not be completely shut, so that in the morning the sun shone in. The staff at the reception were nice, not everyone could speak English. The wifi is free, but very slow. Breakfast is served in a restaurant on the lower floor. As everywhere in Indonesia, the warm dishes (noodles, rice, chicken, etc. predominate). Otherwise there is toast, butter and jam. 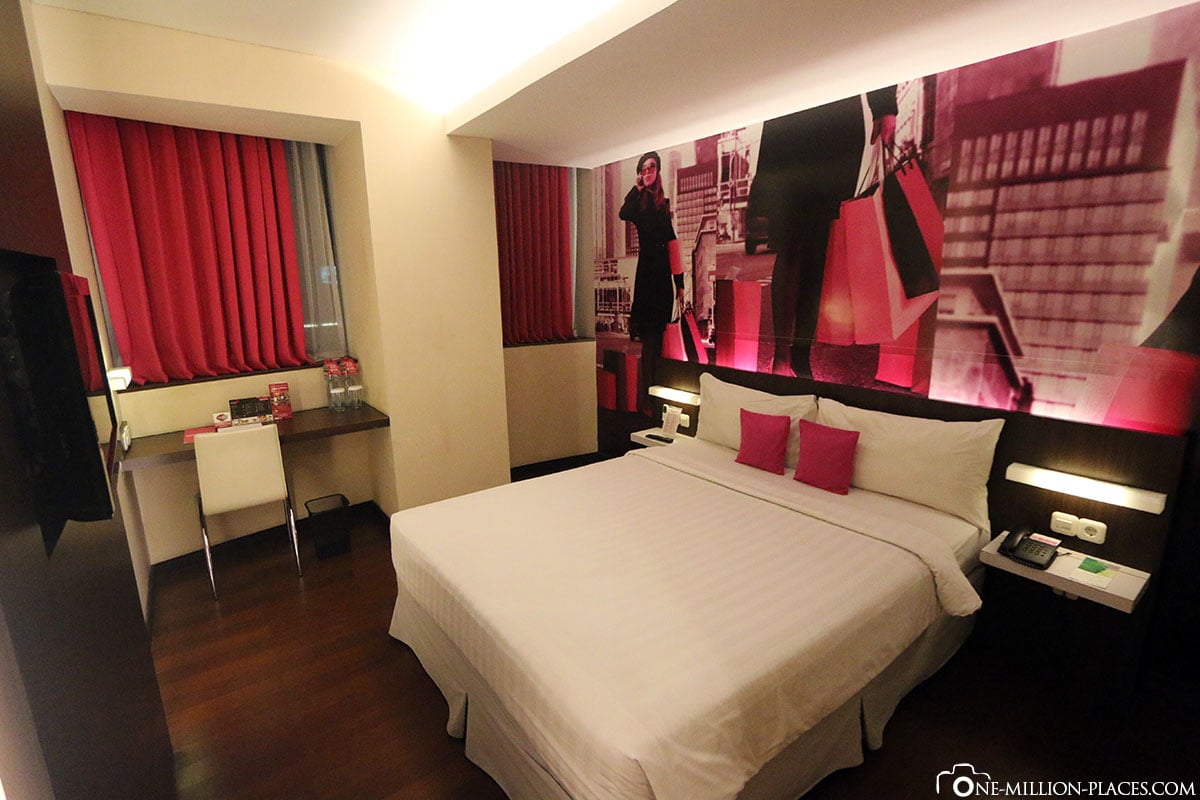 Our room at The Favehotel MEX Surabaya