Today we were able to sleep a little more, because our flight from Guayaquil to the island of San Cristobal in the Galapagos Islands just started at 12 o’clock. The flight with LAN Airlines to San Cristobal took about 2 hours.

At the airport in Guayaquil we had to pay 10 USD each for a Transit Control Card. Every tourist who wants to go to the Galapagos Islands has to pay for it. Our entire luggage was scanned (mainly for fruits and other things that may not be imported to Galapagos) and sealed – and then we were allowed to check in. 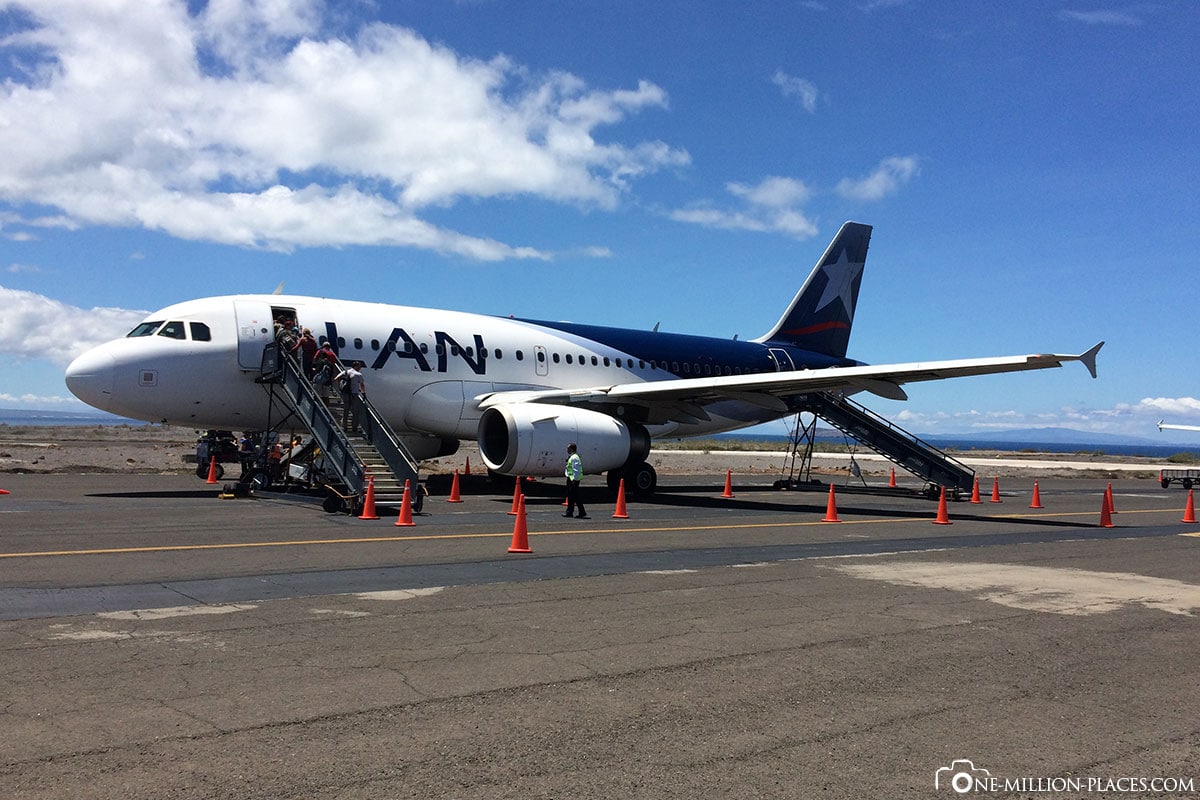 Flight from Guayaquil to San Cristobal with LAN Airlines

The Galapagos Islands are an equator archipelago in the Pacific Ocean, consisting of 13 larger and more than 100 smaller islands. 97 of the country and 99 of the surrounding waters is under strict nature conservation and the extraordinary flora and fauna of the islands are part of the UNESCO World Heritage Site. Entering the Galapagos Islands is strictly regulated, so when we arrived at the airport in San Cristobal we each had to pay a national park fee of 100 USD.

We were on the Galapgos Islands in 2015. In the meantime, the rules for entry may have changed completely. For example, we have found the information that since February 2018, the presentation of a return ticket and a hotel reservation for the planned length of stay must be presented at the time of entry. More detailed information can be found on the website of the Foreign Office. 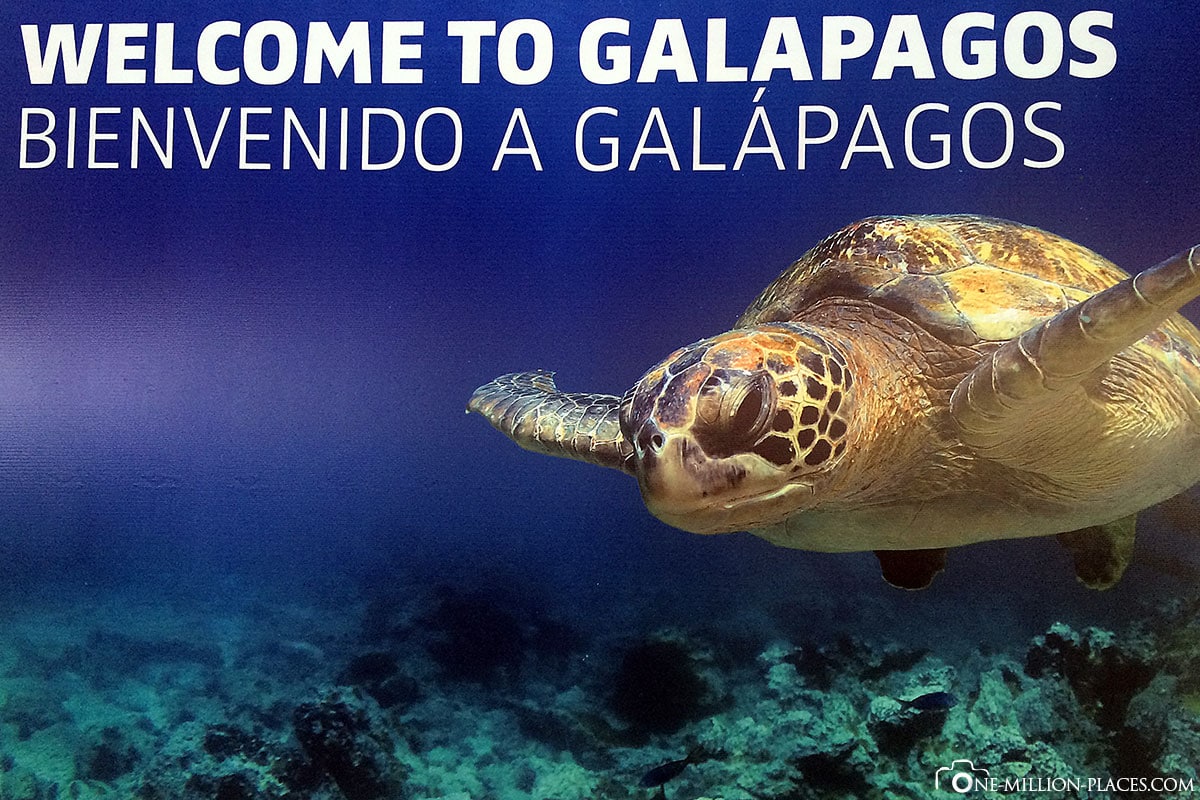 To see as many of the different Galapagos islands as possible, we have booked an 8-day island hopping tour through the Agency Shine Galapagos. According to the tour operator, the tour program for the next few days looked like this:

Day 1 – You take a flight from Guayaquil to the airport of San Cristobal at Galapagos. Our guides will take you over to Puerto Baquerizo Moreno. In the afternoon you are going to visit La Loberia. It is a good place to observe sea lion colonies. You can see dry vegetation and more common the mangroves, salt bush, green stick and muyuyo. Snorkeling. Dinner and accommodation.

Day 2 – After breakfast (7.30 am) you are going to do a bay tour, you have the opportunity to visit: Leon Dormido (It consists of a rock with in the form of an obelisk that emerges from the sea, good place to practice snorkel and dive). Lunch on the boat. Puerto Grande (The bay surrounded by mangrove forests; its waters are quiet and suitable for swimming. From the beach you can see hermit crabs, lava gulls, pelicans and blue-footed boobies feeding). Or Manglesito beach. Dinner, accommodation.

Day 3 – After breakfast (6.30am) you take a speed boat to Santa Cruz. Lunch. Afterwards you will visit the Highlands of Santa Cruz to see giant tortoises in the natural life. Dinner and accommodation.

Day 4 – After breakfast (7.30 am) you take a speed boat in order to travel to Isla Floreana ,we will visit the highlands, the freshwater springs and cultures of the zone. After lunch you visit the beach LOBERIAS where you can snorkel and enjoy the presence of sea lions and iguanas. Or Santa Fe Island, you can make snorkel to see: sea leons, marine turtles, sharks. After de lunch you visit Escondida Beach. 3:30 p.m. Back to Santa Cruz, dinner, accommodation.

Day 5 – Isla North Seymour.- Small island similar of Baltra, It has a vegetation characteristic of the arid zones of the islands. Hosts the largest breeding colony of the magnificent Frigate. So we can observe the blue footed boobies and migratories birds. Or Isla Bartolome.- It has spectacular landscapes. Among its main highlights: a sand dune and the Pinacle Rock, bays and beach with turquoise waters. Dinner and accommodation.

Day 6 – Breakfast (07:30 am). Visit the Charles Darwin Scientific Station. After de Lunch you take a speed boat to Isabela Island. Here we visit the Poza de Flamingos. Dinner and accommodation.

Day 7 – Breakfast (07:30). Hiking to VOLCAN SIERRA NEGRA (the 2nd largest and most active volcano in the world, last eruption on 22nd octobre in 2005)), and VOLCAN CHICO, where you get a snack. After lunch You take a boat to ISLA TINTORERA where you can observe penguins, sharks, sea lions, and colorful fish. So get the chance to snorkel at the beach. Return to the hotel. Dinner and accommodation.

Day 8 – Return to Santa Cruz. Visit Los Gemelos (It is a place on the island where to find the Scalesia forest, endemic plans to this area). Transfer out to Baltra airport. 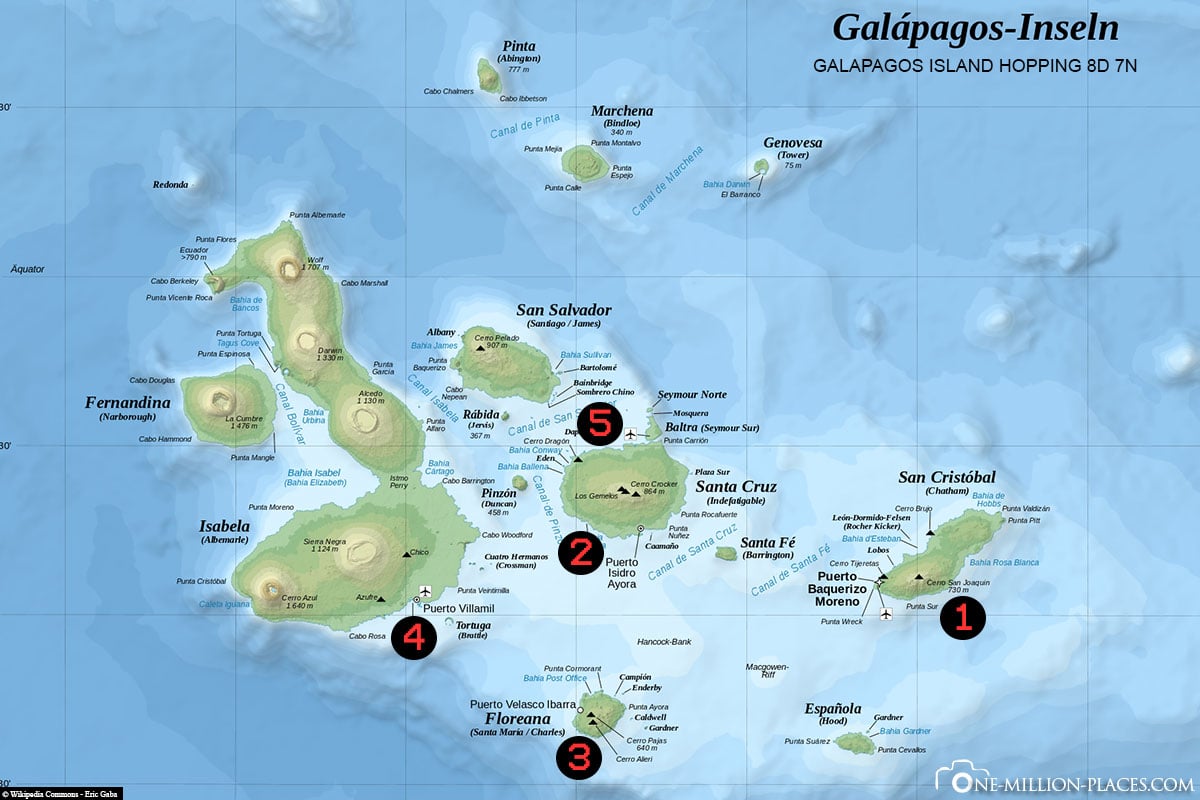 San Cristobal is the easternmost of the Galapagos Islands and has an area of 558 km2. The highest point of San Cristobal is an extinct, heavily eroded volcano, which is 730 meters high.

After we got our luggage at the airport, we were picked up by an agency employee and taken to our first accommodation Royal Bambu Inn in Puerto Baquerizo Moreno.

The location is good. The harbour promenade can be reached in a few minutes on foot and can be observed endlessly. We had a twin room on the upper floor. After dragging the heavy suitcases up, you would actually need a cooling down. Unfortunately, the room does not offer this, because the air conditioning has hardly cooled at all, so sleeping has been difficult. The room was very spartan – for two nights, which we booked here as part of a tour, but ok. But we wouldn’t have stayed longer. 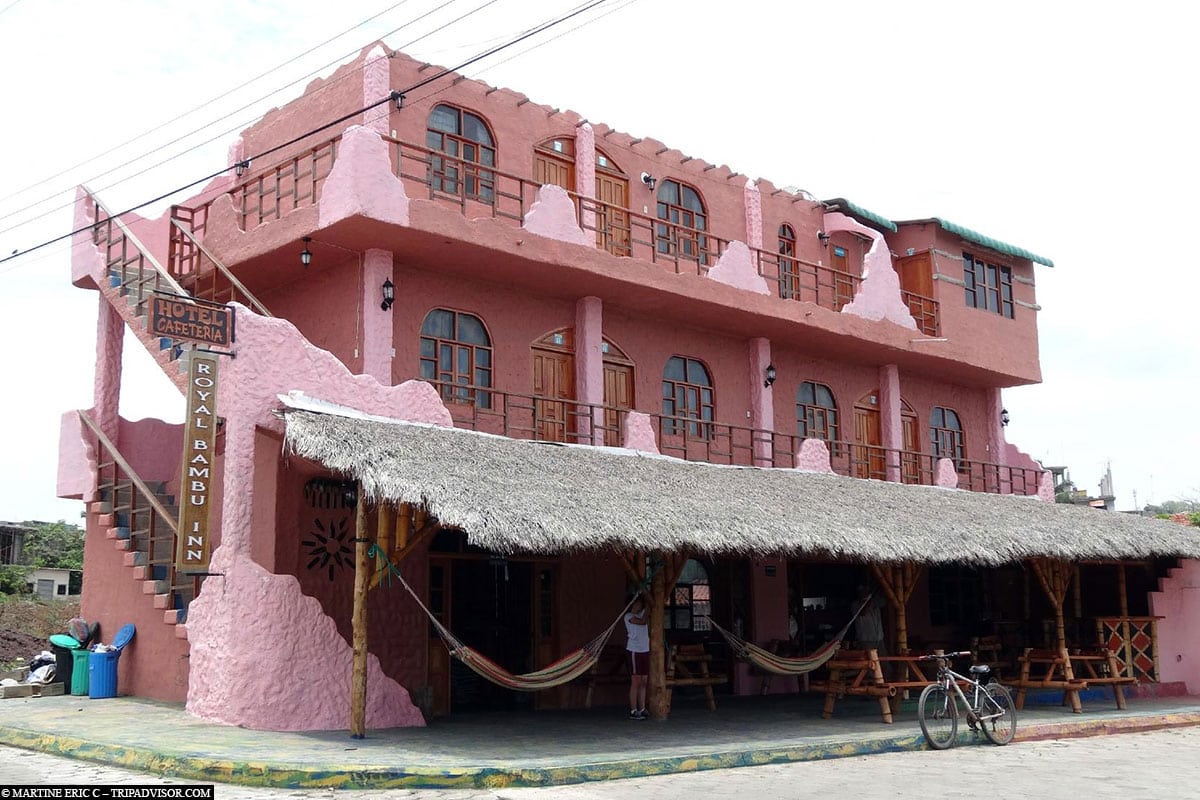 After lunch we visited with our guide the beach “La Loberia” at San Cristobal, where we first walked a bit along the coast.

Here you will find mainly the dark sea lizards (Marine leguanes), which sunbathe everywhere on the rugged volcanic rocks.

On the cliffs we could see for the first time the blue-footed bollels typical of Galapagos. At the end we were snorkeling a little on the beach and watched the sea lions, who also like to take the benches 🙂