One of Hawaii’s most famous sights is certainly the Napali Coast, which is one of the most beautiful coastlines in the world. Already from home we had booked online a Deluxe Air and Sea Tour for Kauai, which we were already looking forward to.

Things to know about the Napali Coast

The Napali Coast is a large Hawaiian state park located along the northwest side of Kauai. The cliffs, which are up to 1,200 metres high, stretch from Kee Beach to Polihale State Park. The rugged cliffs (Pali) with their deep, narrow valleys usually end abruptly by the sea. Waterfalls and fast-flowing streams cut through these narrow valleys as the sea forms cliffs at its mouths.

The Napali Coast is not accessible by car. It is only possible to admire the coastal section from the air by plane or helicopter or to sail along the coast by boat or kayak. Over land, the Napali Coast can only be reached via the 18-kilometre-long “Kalalau Trail”. This trail starts at the end of Hawaii Route 56 (called Kuhio Highway) and provides the only access to land along the coast. Several large and small valleys lead to Kalalau Beach at the foot of the Kalalau Valley. Side paths along the trail lead to waterfalls in the valleys above.

The Napali Coast in Hawaii

The meeting point for the boat tour was 8 o’clock in the shop of “Blue Dolphin Charters” in Port Allen on the south coast kauais. After a small briefing with explanation of the (not so great) weather situation, we went to our catamaran. 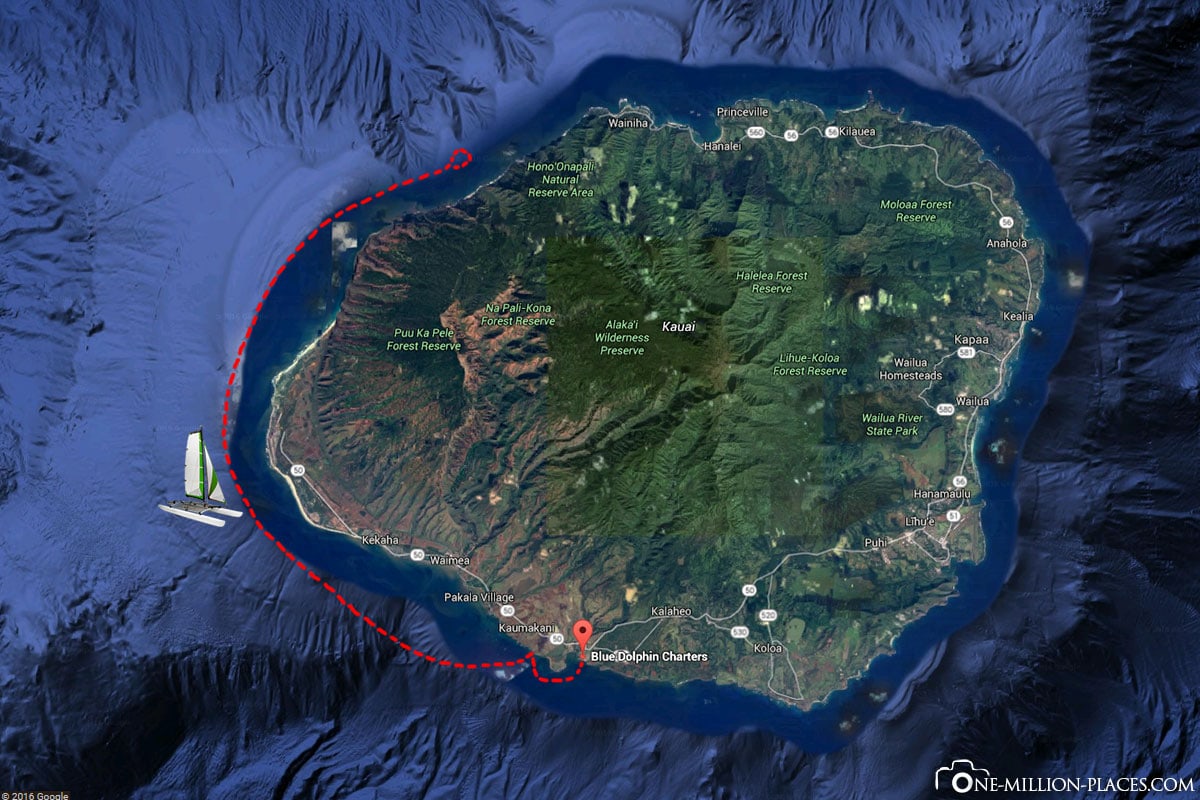 The route of the catamaran tour

We had a total of 40 people on board. After a few minutes of driving we had reached our snorkeling stop off the coast. We were here for three quarters of an hour in the water, but apart from a few fish unfortunately did not really see anything special.

Dolphins in front of our catamaran

The tour operator promises the following on its website:

Begin your day with our most popular morning tour aboard one of our custom-built 65′ catamarans! We guarantee dolphin sightings on all of our morning tours!

We were already a little sceptical, because it is difficult to promise such a thing on the open sea. But they should be right. It didn’t take long for dozens of dolphins to swim very close to our catamaran. They swam beside us, in front of us and often under the boat. That was very impressive.

A ride along the Napali Coast

The journey was then continued north, because the real destination was the dreamlike Napali Coast, which is known from the Jurassic Park movies. Unfortunately, however, what we had all feared came. Our captain told us that it was too dangerous in the weather to continue on the north coast. The waves and the wind were already really strong, the catamaran swayed up and down and the first passengers were already hanging over the railing. So we had to turn around halfway – really a pity.

Our tip: In order not to become seasick, it is advisable to get a few tablets against seasickness beforehand! This is available in every pharmacy or on the Internet e.g. by Ratiopharm or Aliud . After our experience in the Galapagos Islands, we still take these tablets today with every trip on the water, where it can get a little more violent. And since then we have never become seasick again.

Our drive then went back past the harbour and south, hoping to see a few humpback whales. We actually saw some, but unfortunately they were far from the boat.