Today we took advantage of the late check-out time of our accommodation Aarons Cottage slept long and had breakfast late. Around 12 o’clock we made our way to Hawaii Volcanoes National Park to drive the Chain of Craters Road.

The Hawai’i Volcanoes National Park is open 24 hours a year round, so you can go in and out at any time. The parking entrance fee of 10 US dollars per car is really cheap, especially since the ticket is valid for one week. 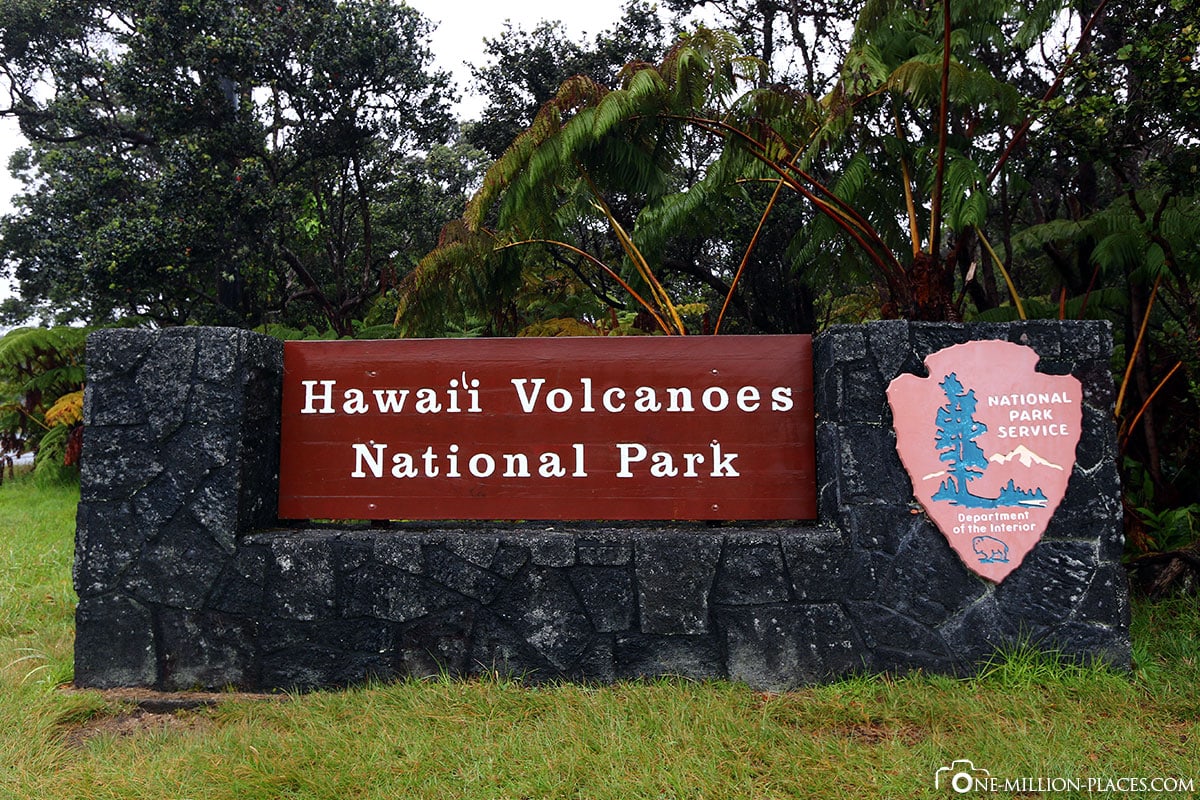 Our first stop was the Jaggar Museum, where we could see, read and learn many interesting things about the Hawaiian volcanoes. From the museum you had a good view of the Halema’uma’u crater, whose glow we observed on our private tour the day before yesterday. During the day, however, only steam rises, from the glow (as we had seen in the evening) one unfortunately sees nothing.

In March 2008, an explosive eruption occurred here, which blew up a hole about 30 m in size into the side wall of the crater. Since then, a cloud of smoke of sulphur dioxide and volcanic rock in the form of ash has emanated from this opening, and subsequent explosions gradually increased the opening. In the opening there is liquid lava, with the mirror constantly changing. In 2015, the lava reached the upper edge of the opening for the first time. As a result of this change, Crater Rim Drive between the Jaggar Museum and the Chain of Craters Road was closed as this part of the road passes directly through the area over which the toxic plume of smoke passes [Source: Wikipedia]

The Chain of Craters Road

After that we drove the Chain of Craters Road south. It passed mighty lava fields from different years, which were again very impressive. On the mountain slopes you could also see very well the differences between the two lava types on Big Island: on the one hand the “Aa-Lava”, which after solidification has a sharp-edged surface with unevenly shaped, jagged chunks. And on the other hand, the “Pahoehoe-Lava”, whose surface is very smooth.

The road is no longer completely passable, as a lava flow crossed the road a few years ago. Until a month ago you could still drive to this place, but unfortunately this is no longer possible. The road is currently being renovated, as an emergency route will have to be built for the inhabitants of the village of Péhoa in case the lava flow should cross Highway 130. Because then the road through the national park is the only “way out”. Down at the ocean we looked at the Holei Sea Arch and then drove back to Hilo.

Flight to Oahu & our hotel in Honolulu

Our flight back to Honolulu was at 6.30pm and 45 minutes later we were there. Since our onward flight to Sydney starts tomorrow at 8.15 am, we have booked a room at the Pacific Marina Inn for one night, as this is very close to the airport and offers a free shuttle 24 hours a day.

We left our rental car at the airport and wanted to use the free Shuttel to the hotel. The pick-up at the airport didn’t work out so well because we thought the shuttle had fixed departure times. However, you have to call the hotel in the arrivals hall of the airport (there is a wall where many hotels with phone numbers are on it) and then they come to pick you up. The way to the airport the next morning, on the other hand, worked very well. Our twin room was on the 1st floor (luggage towing announced), very small but clean. The fridge was a bit noisy at night. We slept quite well. In the morning there is free coffee in the hotel lobby. The hotel is located in an industrial area, so there is not much around it. In the hotel itself there are vending machines where you can buy drinks or sweets. Ok for one night, but nothing more.

Our room at Pacific Marina Inn