The first stop on our round trip through Canada was La Mauricie National Park located halfway between Montréal and Québec City in the Laurentian Mountains in the province of Québec. The night before we spent our first night in a motorhome at a campsite near the national park and drove from there to the national park the next morning.

Our very first campsite: how exciting! Since we wanted to explore the La Mauricie National Park the following day, we had chosen the campsite Bivouak, as it is only about 30 minutes from the western entrance of the national park. We had already booked a full-service campsite (electricity, water, sewage) online in advance and could – after a short registration in the office – already drive to our pitch. For the first pitch it was important to us that this is a “pull-through”, because especially on narrow or heavily occupied campsites, manoeuvring and parking with such a 9 meter motorhome can be a small challenge. That’s why we just wanted to manoeuvre forward with our motorhome both when parking and when parking – so to speak, drive through the parking space.

Camping in Canada for the first time? Our questions, experiences & tips

Our campsite was equipped with a picnic bench and a fire bowl; Firewood would have been obtained at the reception. Which was unfortunately a pity: W-LAN was only available at the reception, unfortunately not at the parking space directly. Only a few minutes walk from our pitch, was a very nice lake, which we looked at the next morning.

The next morning we went directly after breakfast in the direction of La Mauricie National Park. At the entrance “Saint Mathieu” there is a large parking lot and a visitor center to the right of the road. There we first wanted to find out something about the national park and then we were amazed to find out that on the day of our visit it is mostly closed due to a bike race and only a small part is accessible. What a pity! Nevertheless, we did a very nice hike and were still able to get to know the park a bit.

The location of La Mauricie National Park in Google Maps

Things to know about the National Park

La Mauricie National Park is located north of Trois-Rivières, halfway between Montréal and Québec City. It can be reached from both cities in about two hours, making it perfect for a day trip or a camping weekend. It was founded in 1970 and has an area of 536 km². Its name derives from the river Saint-Maurice, which crosses the park to the east. In the park there are about 150 lakes, some waterfalls and several hiking trails. Therefore, La Mauricie National Park is a year-round destination due to its numerous sports opportunities (hiking, stand up paddling, swimming, mountain biking, cross-country skiing, etc.).

On the following map you can see the location of the national park. To get to La Mauricie National Park, you have two different options: either use the Saint-Mathieu entrance or the Saint-Jean-de-Piles entrance. The distance between the two entrances is 64 kilometers inside the park (via the parkway) and 41 kilometers outside the park. It is best to inform yourself in advance online on the official website of the national park about the current conditions on site, because for example the Saint-Mathieu entrance is closed from October to May.

A large map of the national park can be downloaded for free here as a .pdf version. 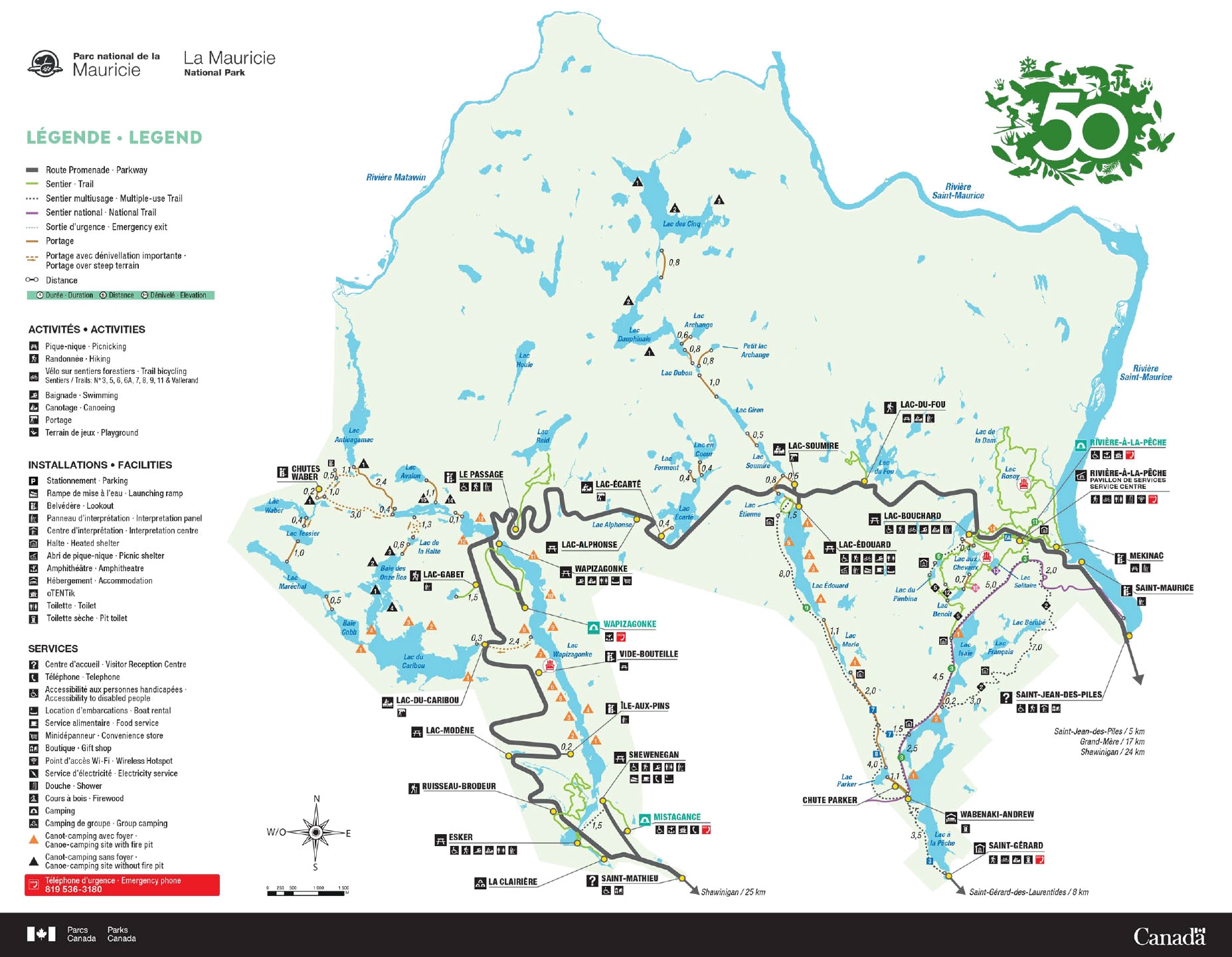 A hike on the “Les Cascades” Trail

How we wanted to drive completely through the La Mauricie National Park, look at the most beautiful viewpoints there and take one or the other hike. However, after we had received the information in the visitor center that due to a bicycle race a large part of the national park is closed and only the part around Shewenegan is accessible, we had to resched plan our program a bit and decided on the hike “Les Cascades”.

Since we visited the national park on a weekend and only this small part of the park was open, the parking lots were very full. We were able to park our motorhome directly on one of the few RV parking spaces (RV = Recreational Vehicle = Motorhome). From here it was a short walk to the picnic area Shewenegan, where there was already a lot of activity. Many have had barbecues, picnics, played with dogs or tried their stand up paddle board on Wapizagonke Lake.

The Picnic Area Shewenegan is the starting point for the approximately 2 kilometer long hike “Les Cascades”,which is classified as a very easy hike in the overview maps. About an hour we were on the way, crossed a great bridge, enjoyed beautiful views of the lakes and pond landscape and saw the (somewhat dry) waterfall cascades.

On our hike we were also able to discover the first red leaves. Is this already a first sign of the Indian Summer on the North American continent? 😉 This dry and warm weather period in late autumn is often characterized by a blue sky, warm weather and a particularly intense leaf discoloration in the deciduous and mixed forests. 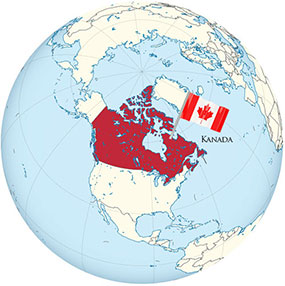