From Sydney our journey in Australia continued to Ayers Rock,an Aboriginal sanctuary and one of the country’s most famous landmarks.

Our flight from Sydney to Ayers Rock

With Jetstar we landed in Ayers Rock on time at noon and picked up our rental car from the rental company Thrifty right at the airport. As always, we have booked this with all insurances via Billiger-Mietwagen.de.

Our accommodation in Ayers Rock

If you’re looking for a hotel near Ayers Rock, you don’t really have many options. There is actually only the Ayers Rock Resort , which is designed like a small place and consists of 5 different hotels in different price ranges. However, you can only sleep at the Outback Pioneer Lodge at a reasonably convenient rate. We decided here for a “4 Share Mixed Dorm” with shared bathroom, as it was affordable at 33 € per person. Prices for a private room usually start from 140 € per night.

The room had 2 double bunk beds and was very small. They had difficulty spreading their suitcase properly. The sanitary facilities were clean and in good condition. The shared kitchen was very well equipped. His food could be placed in the fridge. Within the resort there is at least one supermarket, which is quite cheap and well equipped. We bought bratwurst, bread and salad there. In the lodge communal kitchen you will find everything you need to fry and cook. The pool is ok, but you can also use the pools of the other hotels on the resort grounds. So we just went to the best hotel “Sails in the Desert”, sat there by the pool and at 40 degrees in the shade a little relaxed ☼

Shortly before sunset we went to the Uluru-Kata Tjuta National Park, which is a UNESCO World Heritage Site and World Heritage Site. The land officially belongs to the local Aborigines, the Anangu. However, they signed a contract in 1985 that leased the land back to the Australian Parks & Wildlife Service for 99 years. 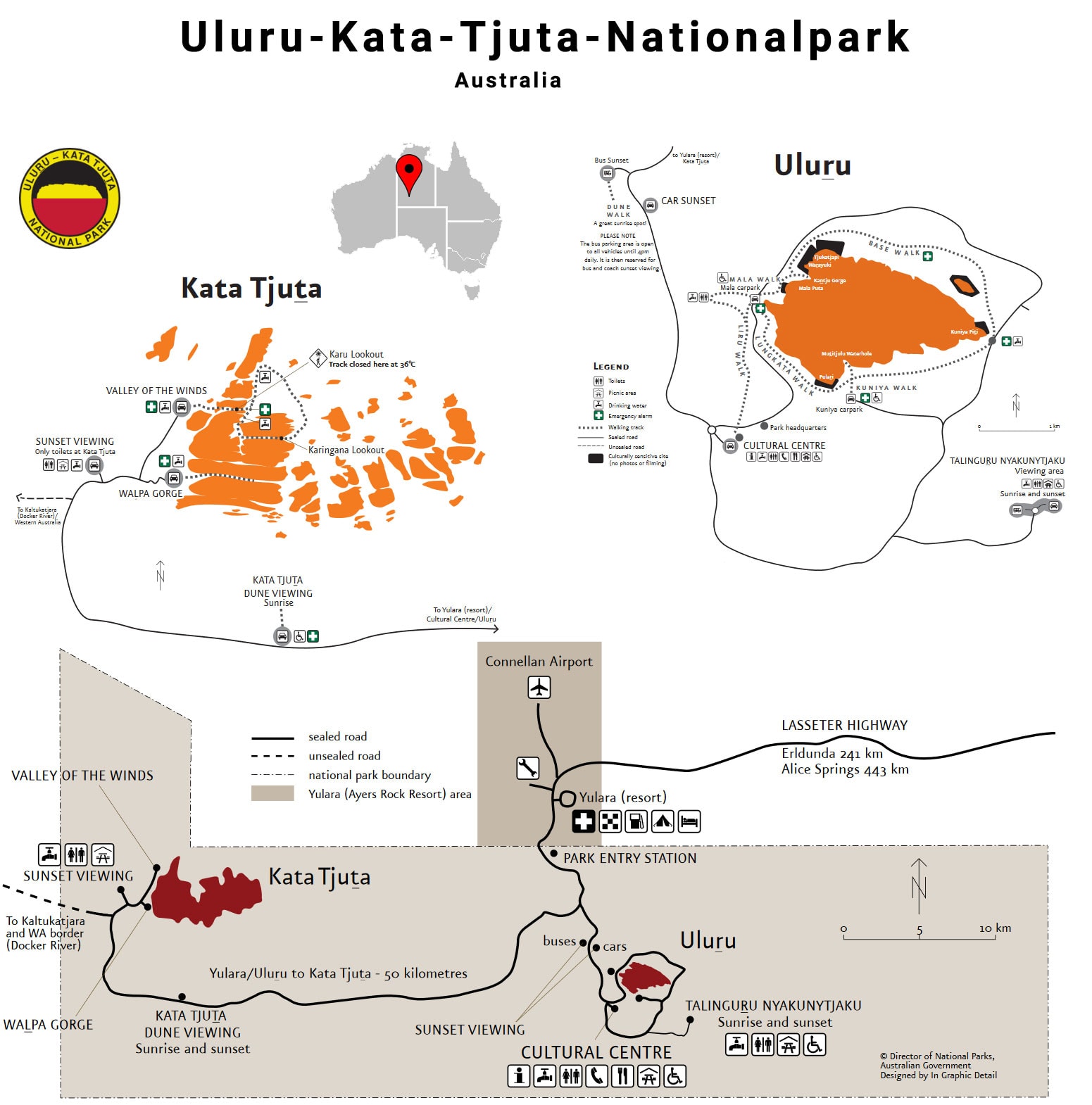 A map of Uluru-Kata-Tjuta National Park

The national park is open 365 days a year from 5 a.m. to 9 a.m. (seasonal). The entrance fee is 25 AUD per person (approx. 18 Euro), the ticket is valid for three days and you can drive in and out as often as you like. The national park includes the famous uluru (Ayers Rock) and Kata Tjuta (Mount Olga), 40 km to the west.

The Ayers Rock at sunset

Uluru is an island mountain that rises about 350 meters above its surroundings. For the Aborigines it is considered a sacred mountain,therefore there are also various rules that visitors have to abide by. We could already see uluru from above on our approach to Ayers Rock and thought at that moment actually “A big sandstone heap… in the middle of absolute nowhere… ok, we’ve seen it… continue’. But the closer you get to the whole thing, the more you are fascinated by it.

Around 6.15 p.m. we arrived at the Sunset viewpoint and waited until the sun slowly sets. The Uluru appears particularly strongly in its typical red colors during this time. 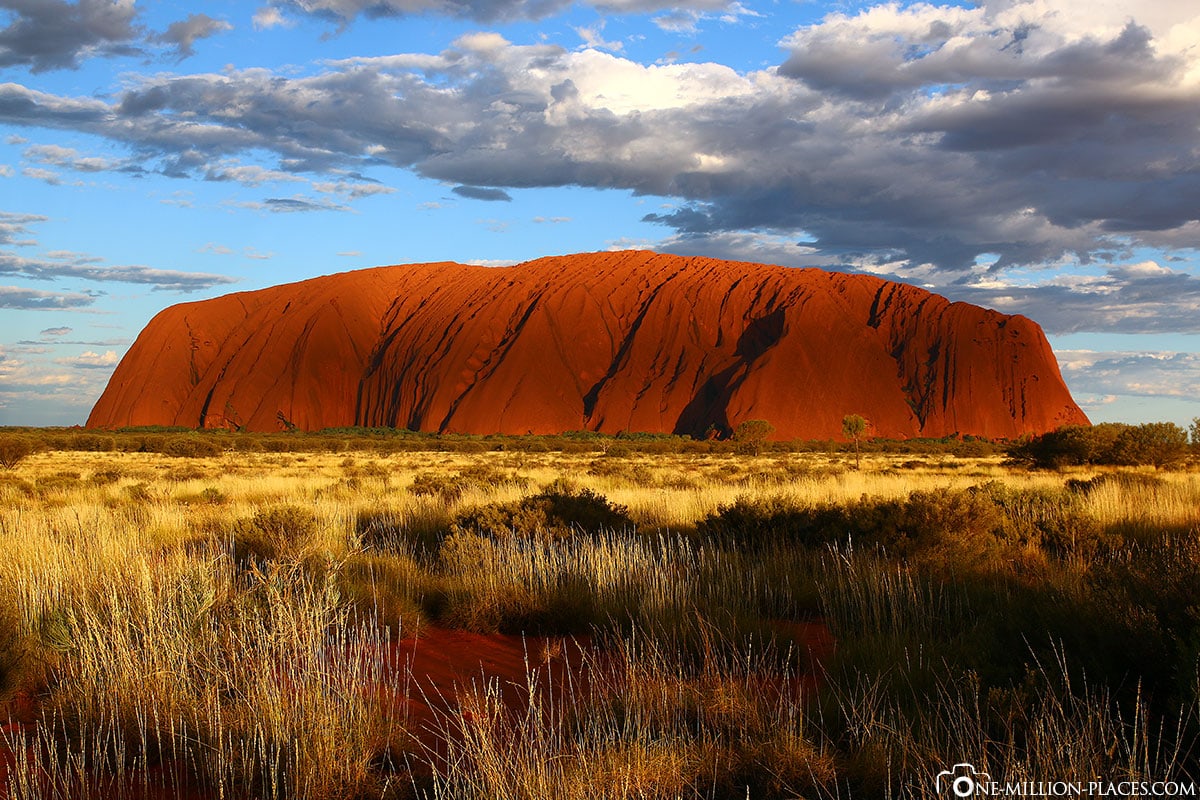 The Ayers Rock at sunset

Actually we were going to do a nice hike around Uluru. However, due to the current fly plague (see paragraph below), we decided against it. A relaxed hiking is simply not possible. So we drove the round — Uluro Road) around the mountain and stopped at various points to take pictures. Afterwards we went briefly to the Uluru-Kata Tjuta Cultural Centre, where you can see an exhibition about the Aborigines and uluru. Around 11 o’clock we were back in the hotel and sat down at the pool – definitely the best alternative at 41 degrees.

Until now, it has been possible to climb the mountain on various hiking trails. Since October 2019, the ascent to the 348-metre-high rock in the Australian desert has been closed. The administration of the national park thus complied with decades of requests from the local Aborigines – the Anangu. For them, the shimmering red mountain is sacred terrain. Those who violate the ban must pay at least 630 Australian dollars (just under 390 euros).

Since we had already seen the sunset at Uluru yesterday, we wanted to watch the sunset at the Kata Tjuta rocks today. The journey there takes about 45 minutes from Ayers Rock Resort. When we arrived at the Sunset viewpoint, we immediately noticed that there are far fewer people here than yesterday at Uluru. Unfortunately, the view from the point was not so good because of some trees, so we just drove back a bit and watched the sunset from another point from the road.

The Ayers Rock at sunrise

Already at 5.45 in the morning the alarm clock rang for us on the 3rd day, because we wanted to watch the sunrise at Ayers Rock. Forty minutes later we were at the Sunrise viewpoint – like dozens of other tourists. At the beginning the Uluru was still in the dark, but there were a few small rain clouds and they gave the picture a great atmosphere. Slowly the morning sun appeared on the horizon behind us and through the clouds the first rays of the sun of the day conjured an incredible light into the sky. When a rainbow appeared over uluru, the picture was perfect – it was really worth getting up early! 🙂

With the first rays of the sun, however, the thousands of annoying flies start their mission “attack on the visitors”. And so, after just over an hour, we set out to go back to the hotel. We had breakfast there, packed our things, drove to Ayers Rock airport and gave up our rental car. At 10.20am our qantas plane went via Alice Springs to Adelaide, where we will spend the next three nights. 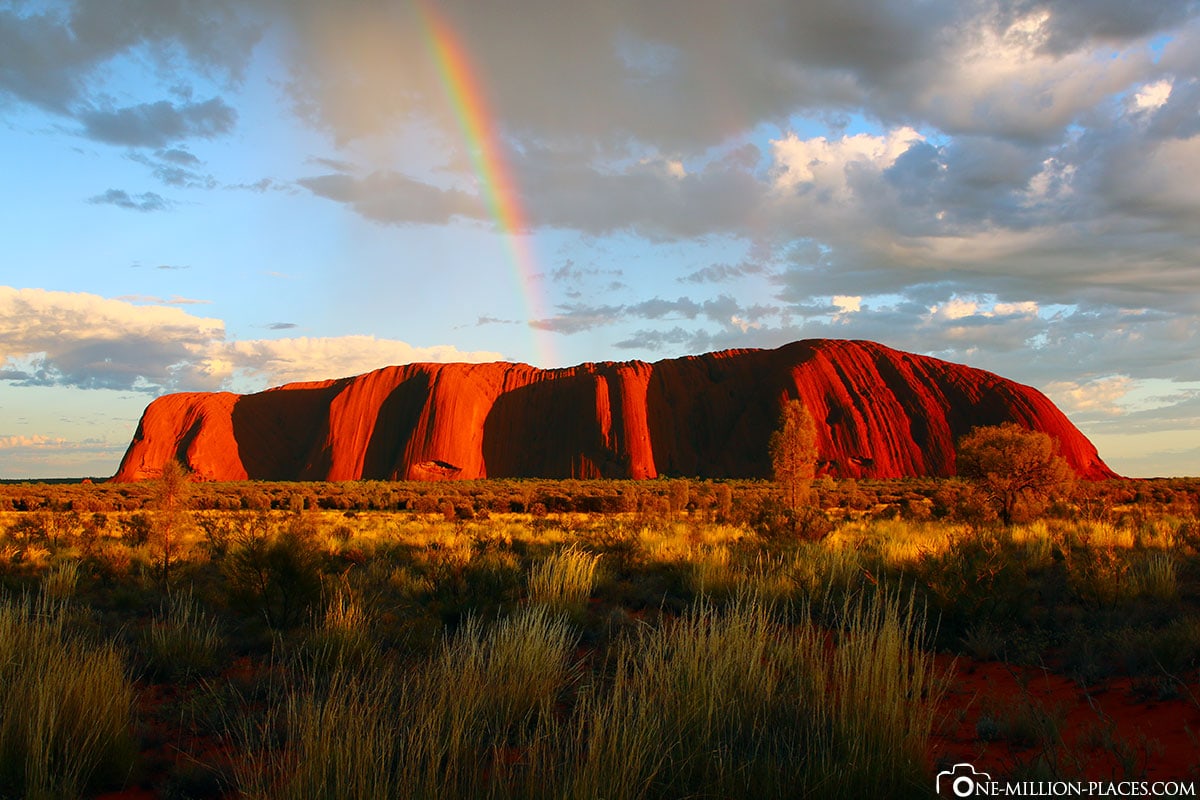 The annoying bush flies in Australia

During our stay at Ayers Rock there was unfortunately an insane fly plague. There are bush flies everywhere, also called Musca vetustissima. This fly page isn’t available at any time of the year and basically flies aren’t really sooo bad – but these ones are really incredibly penetrating! They feed on bodily fluids and therefore always control the head. They are constantly trying to fly into your eyes, nose, mouth or ears. And that’s really hundreds, thousands, probably millions… Anywhere! If you don’t move for a short time, you easily have 50 flies on your clothes and face. Unfortunately, this makes it absolutely impossible to enjoy the surroundings.

Every second person runs around here with a net around their heads, which we hadnot bought separately. But it’s certainly not the worst investment against the bush flies, especially if you want to go on longer hikes. In hindsight, we would have liked to have had that. These can be purchased here at Amazon relatively cheaply in advance.