After an eventful alpaca hike with Sajama Lama in Jettingen-Scheppach in the morning, we went on to Augsburg at noon to see the sights of the UNESCO World Heritage City.

Things to know about Augsburg

Augsburg is a city in the southwest of Bavaria and has about 300,000 inhabitants. This makes it the third largest city in Bavaria after Munich and Nuremberg. The city is characterized by Roman roots and the trading dynasties of the Fuggers and Welser. Some magnificent Renaissance buildings in the city justify their nickname as “the northernmost city in Italy”.

Augsburg is a city with more than 2,000 years of history. The year of its foundation is 15 BC, as this year a legion camp was built on the territory of the present-day Oberhausen district by the Roman emperor Augustus. “Augusta Vindelicum” – as the Roman civil settlement between Lech and Wertach was once called – is the oldest city in Bavaria and the second oldest city in Germany after Trier.

In Augsburg, the centre of the Romantic Street,the now internationally known holiday road was founded in 1950. The road stretches over 29 villages and 460 km – starting on the Main in Würzburg over the west of Franconia to Bayerisch-Schwaben, through a piece of Upper Bavarian territory to the Ostallgäu to Füssen. It is interesting that Augsburg is the city with the highest number of public holidays in Germany, as there is also a public holiday on 8 August (Augsburger Hohes Friedensfest), which is limited only to the city area.

Since July 2019, Augsburg has been awarded the title of UNESCO World Heritage Site. The Augsburgers have earned this award through their historic water management “Augsburger Wassermanagement-System”, which includes 22 monuments – canals, waterworks, hydropower plants and monumental fountains.

The city is the town’s oldest waterworks and water towers in Central Europe. The system showed very early on how to steer, use and protect the important resource water in sewer systems – as early as 1276, the first channels were mentioned by name. What Augsburg did differently from other cities: The city paid attention to water hygiene early on and separated drinking and drifting water. A novelty in the time and a model for other cities.

During our walk through the city we were able to discover some of the monuments, such as the Zeughaus, the Stadtmezg, the Lechkanal in the Ulrichs- and Lechviertel, the Augustusbrunnen at Rathausplatz, the Herkulesbrunnen on Maximilianstraße and the Merkurbrunnen on Moritzplatz. During an hour-long guided tour, we were also able to take a look at the Large and Small Water Tower, which is located at the Red Gate. These were built at that time in order to be able to lift water into the Upper Town of Augsburg, which lies 12 m above the water-rich Lechtal.

What to see in Augsburg

From our Hotel Augusta, which is centrally located in the city centre of Augsburg, we were able to reach the most important sights on foot. The weather played along perfectly with our city exploration, so we could take a nice walk through the city ☼

The Town Hall & the Golden Hall

Our first port of call was the Town Hall Square, where the Town Hall, the AugustusBrunnen and the PerlachTurm are located. Everywhere people sat outside in cafes and enjoyed the great weather.

The eye-catcher on the square is definitely the 57 m high monumental town hall, which was built between 1615 and 1624 and is considered one of the most important Renaissance buildings north of the Alps. Together with the 70 m high Perlach Tower, it is the landmark of the city of Augsburg. We would have liked to have enjoyed the view of the Augsburg city area from the observation deck of the tower, but unfortunately the tower has been closed to the public since 2017 until further notice due to renovation work.

The town hall houses the Golden Hall, whose visit must also be on the sightseeing list when you are in the city. For 2.50 EUR per person you can get tickets in the tourist information office and then visit the hall. When we were there, no other person was there, which was of course great for the photos 😊 The 552 m2 hall is located on the second floor of the town hall. With its impressive ceiling height of 14 m, its wooden portals, the lush murals and the gilded wooden ceiling, one first of all comes to wonder: an incredible 2.5 kg gold leaf was processed here. Originally, the hall was built as a meeting place for the Reichstage. Since its completion, however, it has been mainly used as a reception and meeting room for the city.

Our next sightseeing stop led us to the Fuggerei, which was donated in 1521 by Jakob Fugger as a housing estate for needy citizens of Augsburg. It is the oldest social settlement in the world, a “city in the city” with eight alleys, seven gates, its own church and a city wall. Today, 150 people live in the 140 apartments of the 67 houses. Residents are people in need who have lived in Augsburg for at least 2 years and are Catholic. They all pay a symbolic annual (cold) rent of 88 cents per year per apartment – which corresponds to the nominal value of a Rhenish guilder. In addition, three daily prayers must be made for the founder and the Fugger family.

After we paid the entrance of 6.50 EUR per person at the entrance, we strolled through the streets of the settlement on our own. The “Museum of the Residents” and the “Museum of Everyday Life” are particularly worth seeing, which illustrate the current lives of the inhabitants as well as the changes of the last decades. The World War II bunker is also worth a visit, as it documents the destruction of the Fuggerei during the Second World War and its reconstruction.

Augsburg connects every visitor with the Augsburg Puppet Box, a puppet theatre in which fairy tales and plays have been performed since 1948. It is housed in the historic Heilig-Geist-Spital in augsburg city centre and has gained nationwide fame since 1953 due to the countless television productions (e.g. “Jim Knopf and Lukas der Lokomotivführer”).

With an area of around 217 hectares, Augsburg’s Old Town is the third largest old town in Germany after Cologne and Hamburg. It was not so easy for us to find out exactly where this area in the city is, because we found contradictory information here on the Internet. Some refer to the entire city centre as the old town, others write that this is “only” an area of 30 ha between Maximilianstraße and Stadtgraben or the outer moat.

In any case, the narrow and winding streets of the Lower Town are part of it, which can be reached via the so-called slope edge over the Judenberg, the Eisenberg or the Perlachberg. This separates the Upper Town with its wide shopping streets from the Lower Town. In the old town you will not find large department stores, but small boutiques and galleries, sweet cafés and quaint restaurants. As the streets and alleys are free of through traffic, the district exudes a relaxed and tranquil atmosphere despite its central location. Numerous Lech canals run through the old town; many of Augsburg’s 530 bridges are located here in the old town. Due to its countless streams and canals as well as bridges, Augsburg is therefore often referred to as “Little Venice”.

Back in the Upper Town we strolled further through the streets and were able to discover one or the other attraction.

In the pedestrian street Annastraße there is since June 2020 a great installation of colorful lampionsthat hang over a part of the street. We could see such roads e.g. with umbrellas already in other places in the world, as in Port Louis on Mauritius,in Victoria in the Seychelles or in Athens. And every time we’re excited about it again, as it’s an easy way to create a new attraction in a city… and of course it is also a great photo motif 😊 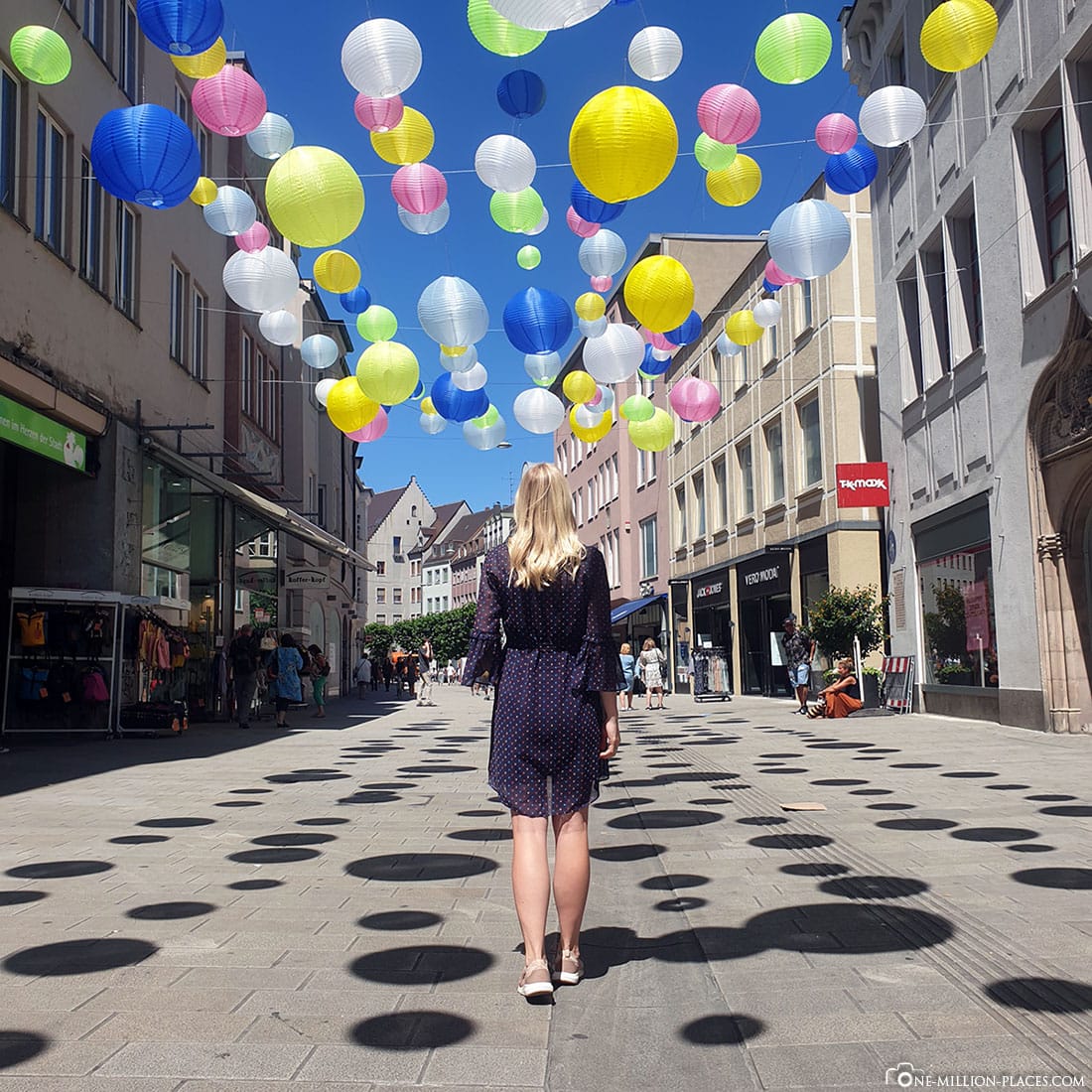 In a side entrance of Annastraße, the path leads to the city market,where all kinds of regional food is offered, but also offers cosy places for a meal on site. The Weberhausis located on Moritzplatz in the city centre. With its colourful frescoes and paintings on the exterior facade, the former guild house of the weavers is a great eye-catcher. It was built in 1913 and replaced a late Gothic predecessor, which was located in about the same place.

Maximilianstraße, which leads from Rathausplatz via Moritzplatz to Ulrichsplatz, is one of the most important streets in southern Germany, as it houses countless Gothic, Renaissance, Rococo, Neoclassical and post-war buildings. In the meantime, many restaurants, pubs, cafés and numerous boutiques have settled in the houses. Directly on the Herkulesbrunnen lies the Schaezlerpalais, Augsburg’s most important and best preserved private residential and commercial building of the 18th century. Today, the Palais has an art collection and a museum. A highlight on Maximilianstraße is the Damenhof, a Mediterranean-looking bar location in the Fuggerpalais. At the southern end of Maximilianstraße – at Ulrichsplatz – we took a look at the majestic Catholic parish church of St. Ulrich and Afra.

Our last sightseeing stop in the city centre was the Augsburg Cathedral, whose origins date back to the 8th century, and the adjacent Fronhof with courtyard garden. The Fronhof is a beautiful green area in front of the former Prince-Bishop’s Residence. Today, the buildings are the seat of the Government of Swabia.