After looking at the most beautiful sights of Augsburg the day before, we drove the 55 km long route to Harburg in the morning to see the castle Harburg, which is one of the largest, oldest and best preserved castlecomplexes in southern Germany. After the tour of the castle we made a sightseeing stop in the fuchsia town of Wemding in the afternoon.

The castle of Harburg on the Romantic Road

The castle Harburg is located on the Romantic Road and towers over the town of Harburg an der Wörnitz. We parked our car in the upper castle car park free of charge and walked from here about 5 minutes to the cash register. Unfortunately, the weather didn’t quite play along – on our arrival it rained slightly. Entrance to the castle courtyard is EUR 3 per person.

The history of Harburg Castle

The history of the former Staufian imperial castle dates back to 1150 – this is proven by a letter from the 13-year-old Staufer Henry, son of King Conrad III, who sent a letter to his aunt to Constantinople, mentioning the castle. In 1299, the castle was pledged to the counts and later princes of Oettingen, who built it into one of the most powerful fortresses in the region in the following decades. It is particularly noteworthy that the Harburg survived numerous sieges, battles and wars over the centuries. It used to serve as a residence and government residence for the rulers and as a reception for imperial and royal celebrities. Since 2000, the castle has been owned by the “Non-Profit Prince of Oettingen-Wallerstein Cultural Foundation”.

A guided tour of the castle

Since we wanted to see and learn a little more about the castle, we decided to take part in a one-hour tour of the castle for a further 4 EUR per person. The tour gave us an insight into the past and beautifully illustrated the history of the very well-preserved facility. So we were able to visit the castle church of St. Michael and the wehrgang, from which one had a great view of the castle courtyard. We also passed countless bay windows and towers, as far as the court hall and the magnificent Prince’s Hall, which is now used for events. A tour of the dining and hunting room rounded off the tour.

We liked the tour very much, because it was very entertaining and we got insights into many rooms that we would not have seen otherwise.

The fuchsia and pilgrimage town of Wemding

After we spent the rainy morning visiting the castle Harburg, we went on at noon to the town of Wemding,20 minutes away. And there we were greeted with the most glorious weather: sun full and blue sky – it is not better 😊

Things to know about Wemding

Wemding is a tranquil town with almost 6,000 inhabitants, which lies on the edge of the Ries crater formed by a meteorite impact (location in Google Maps). Due to its location, the city belongs to the Geopark Ries, the holiday country Donau-Ries as well as the nature park Altmühltal. Wemding is known nationwide as a pilgrimage city and a fuchsia town. The view from the air is also special, because the old town of Wemding is surrounded by a circular city wall from the 14th century. 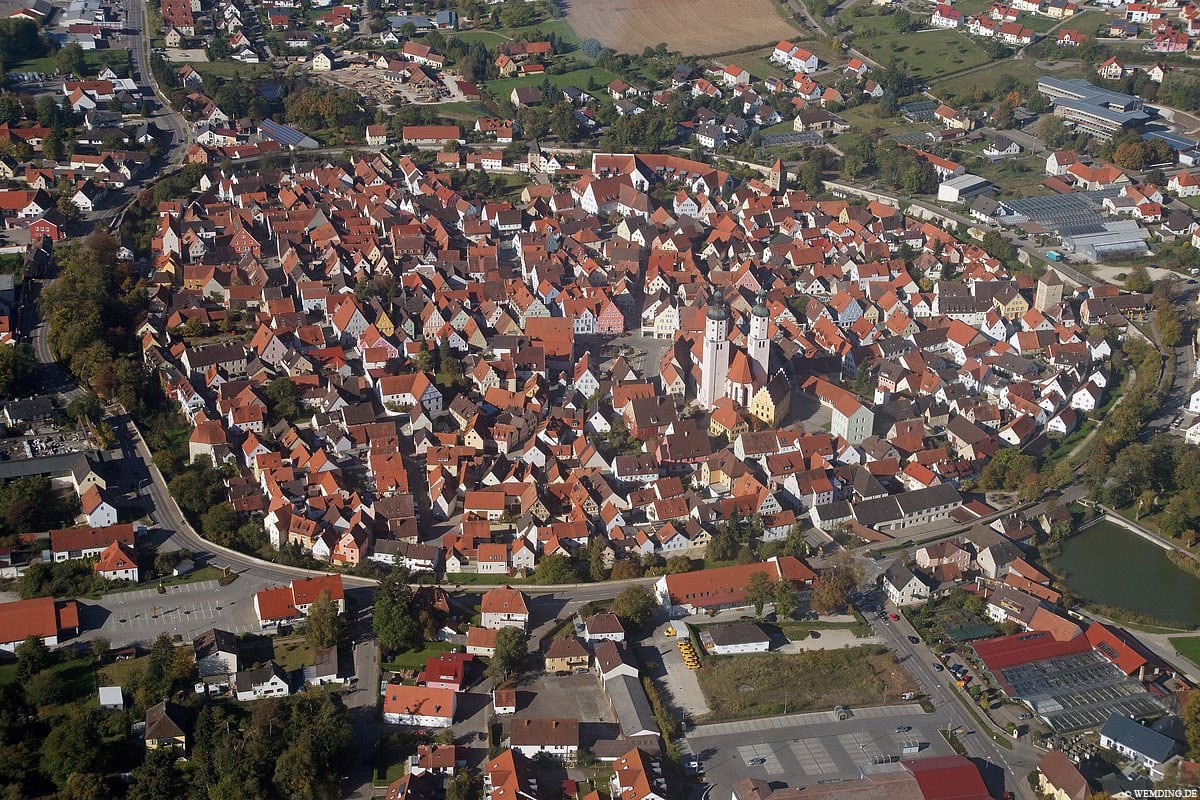 The fuchsia and pilgrimage town of Wemding

What to see in Wemding

The landmark of the city is the parish church of St. Emmeram with its already visible two church towers over 60 meters high. The towers are also referred to as the “unequal brothers of Wemding”, since the southern turret is inclined by cracks in the substructure by about 43 cm to this day; the north tower, on the other hand, is straight. One of the towers is also more bigger than the other.

Wemding is known as Fuchsienstadt, because the famous botanist and doctor Leonhart Fuchs, after whom the fuchsia is named, comes from Wemding. During our tour we were able to discover both his birthplace and Germany’s only fuchsia pyramid with over 700 fuchsia plants. We found it particularly interesting that Leonhart Fuchs never saw a fuchsia: because when the plant was discovered in South America in 1695, he was already dead. And Charles Plumier, the discoverer of the plant, wanted to honor and commemorate the famous botanist Fuchs with the choice of name.

The centre of the city is the historic market square,the “good parlour” of Wemding. The cobbled market square has an almost square area and is surrounded by elaborately renovated old town houses with baroque and Renaissance facades. In the centre of the square is the Marienbrunnen with the statue of Mary. The historic town hall, a stately Renaissance building from 1551/52, was particularly pleasing to us – the highlight here is a busy stork’s nest, which is located on the roof of the town hall. By the way, the town hall is not open to the public. In the building there are meeting and event rooms, a ballroom e.g. for weddings and the meeting room of the city council.

The historic old town is surrounded by a 14th-century medieval circular city wall, which has been preserved to this day. Three wall towers and two gates have been preserved from the former 1.7 km long rampage. We took a short walk along the city wall and had beautiful views of the old town from here. The outer retaining wall is followed by the green city moat, which is accessible by walking paths, resting benches, playgrounds, a Kneipp facility and a rose garden.

From the Wemdinger Platte, a hilltop on the northern outskirts of the city, you have a beautiful panoramic view of the Ries and Wemding. With good visibility, you can even see the city of Nördlingen in the distance. On the hill there is also the time pyramid, which was erected on the occasion of the 1200th anniversary of the city of Wemding in 1993 and is completed in 3193.

Our last sightseeing stop in Wemding was the pilgrimage basilica Maria Brünnlein, which is located just outside Of Wemding and is one of the most important pilgrimage churches in Germany. The heart of the church is a unique altar of grace as a fountain altar, where you can tap your “Brünnlein-Water”. As one of the most visited pilgrimage sites in Bavaria, the church was elevated to “Basilica minor” by Pope John Paul II in 1998. In the immediate vicinity is the inn to the pilgrimage,where we have a delicious lunch to taste. After Wiener Schnitzel and Spätzle we went on to Nördlingen.