Today we have reached the last destination of our 4-day trip through Bayerisch-Schwaben: the city of Nördlingen. From our previous destination Wemding, Nördlingen is only about 20 kilometers away. And we were especially looking forward to exploring the city, because we have often seen the great pictures of northerners from the air, which is surrounded by a completely preserved medieval city wall.

Things to know about Nördlingen

“Nördlingen – The most beautiful corners are round“. With this slogan, the city on the “Romantic Street” advertises itself and its impressive, all-round walkable city wall. Nördlingen is a town in the district of Donau-Ries in the Swabian region of Swabia. Nördlingen is located in the Nördlinger Ries, the impact crater of a meteorite that struck here 15 million years ago. Through the scientific research of the Ries event, Nördlingen became known worldwide. 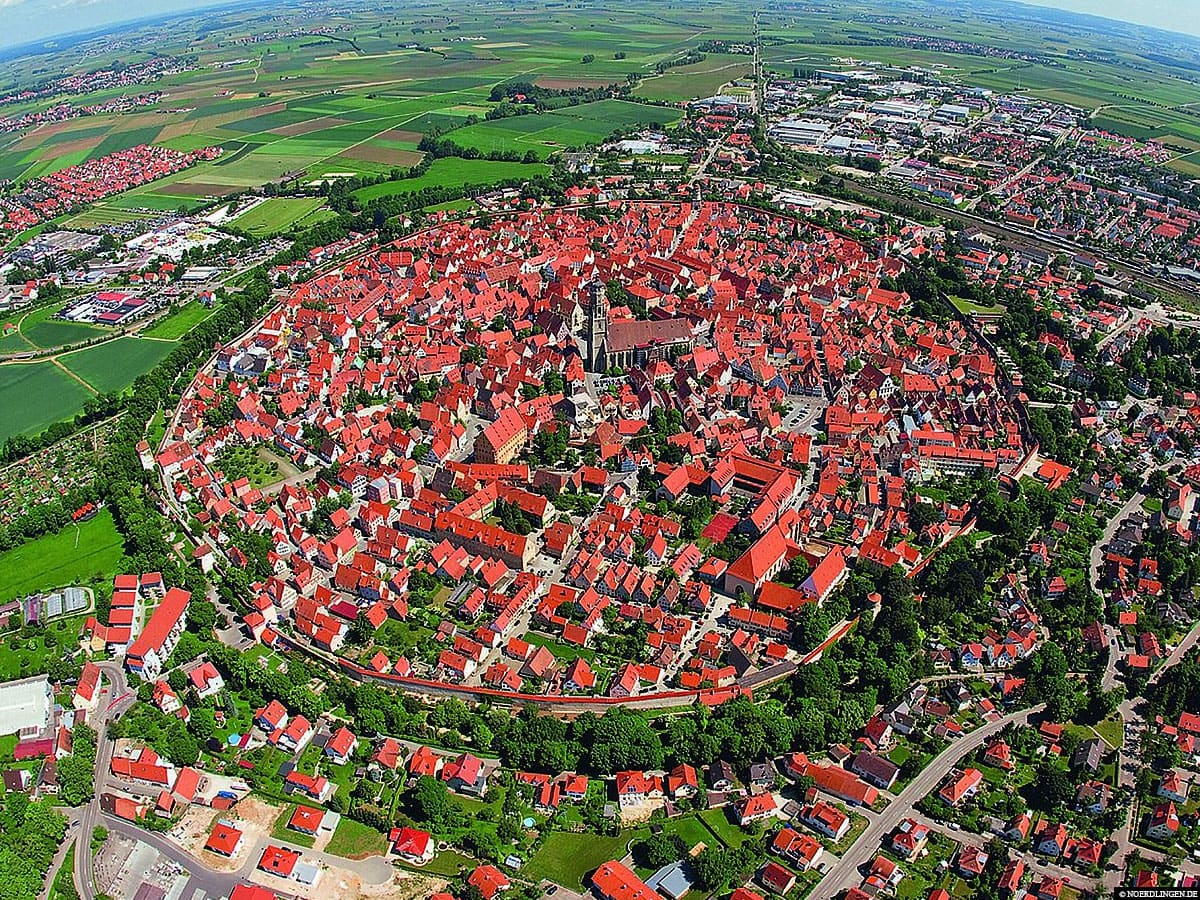 The town of Nördlingen with the medieval city wall

The Earth is literally littered with meteorite craters. The diameter of some craters is only a few meters, while others are hundreds of kilometers in size. The largest verified impact crater on Earth is the Vredefort Crater in South Africa. The impact of a celestial body formed a crater up to 320 km long and 180 km wide about 3 billion years ago, of which only a remnant of up to 50 km is still present.

Is there also a meteorite crater in Germany? Yes, there is 🙂

15 million years ago, a meteorite hit the Alb, leaving behind an impact crater 23 to 25 km in diameter; the crater rim is visible all around as a chain of hills. This natural space, which is still visible today, is called the Nördlinger Ries. Initially, it was assumed that the Giant was of volcanic origin due to the rocks found there (e.g. Suevit). It was not until 1960 that it was possible to prove that the formation of the Ries crater was due to the impact of a meteorite. Today, the Nördlinger Ries is one of the best preserved large impact craters and the most researched impact craters on Earth.

In Nördlingen you can find out about the formation of impact craters in general and the Nördlingen giant in particular in the RiesKraterMuseum. Numerous exhibits, text boards and multimedia offers prepare the topic in an appealing way. 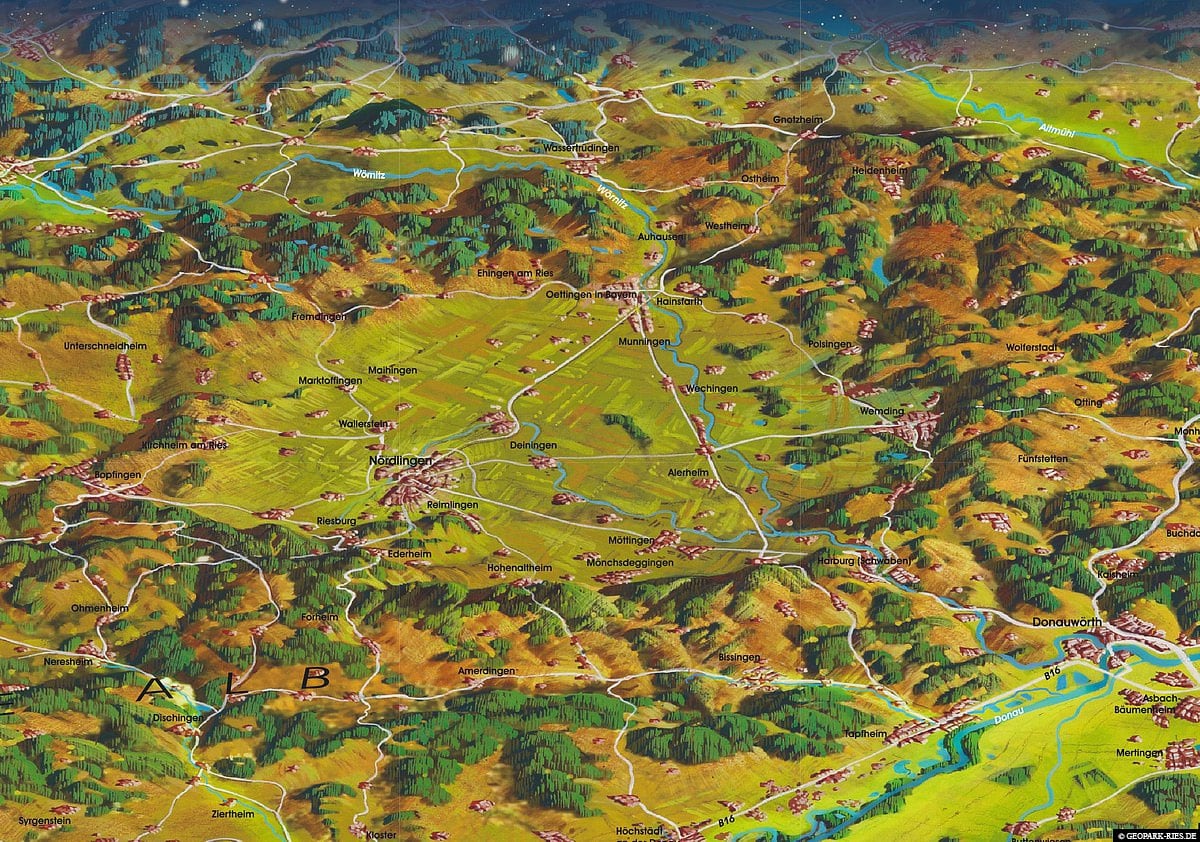 The easily recognizable crater of the Nördlinger Ries

What to see in Nördlingen

From our Hotel Ibis Styles, which is located outside the city walls, we were able to reach the old town within a few minutes on foot via the Reimlinger Tor. But parking is also no problem in the city centre: you can park here for up to 1.5 hours free of charge – we have never experienced this in any historic old town. Definitely a nice service for residents and tourists. Over the 4.8 km long historical tour,which is very well signposted, we were able to explore the city more closely and get to know the most important buildings and sights.

The flagship of Nördlingen is the complete preserved medieval city wall with 12 towers and covered defensive passage, which completely surrounds the old town and is all-round accessible. This is unique in Germany. Access to the city wall is possible at any time and free of charge via the entrances at the five city gates. A walk on the approximately 2.7 km long weir is very worthwhile, because from here we had beautiful views of the medieval old town of Nördlingen with its winding streets.

The construction of the city wall, which is still preserved today, dates back to 1327, when Emperor Ludwig the Bavarian ordered the construction of the present-day ring of walls. After the city fortifications withstood a siege during the Thirty Years’ War, from 1803 the citizens of Northern Austria began to remove parts of the now superfluous city wall. Thanks to King Ludwig I of Bavaria, who in 1826 placed the wall under his protection and forbade its further demolition, worse could be prevented.

We particularly liked the small houses called “Kasarmen” along the inside of the wall, which are built directly on the city wall and in which the city soldiers once lived.

In the centre of the old town is the late Gothic hall church of St. George with its 90 m high bell tower, popularly called “Daniel”. The church was built between 1427 and 1505.

Due to the Corona pandemic, the “Daniel” was closed for a long time. During our visit we were lucky, because a tower ascent was possible again since July 1st – but only at certain times and for a maximum of 25 people at the same time. Just in time with the bell bell at 12 o’clock, the door to the tower automatically opened at the bottom of the entrance and we were able to walk up the 350 steps. A little out of breath we arrived in the tower room, where we paid our entrance fee of 3.50 EUR per person at one of the towers. We were also greeted here by a cat named Wendelstein, who has been living on the “Daniel” for several years voluntarily and without coercion. Sometimes she walks all the 350 steps down into the city, only to come back to her home later. The cat is even so well known that there are own reports and YouTube videos about it 🙂

From the tower room it was then only a few steps to the observation deck, from which a fantastic panoramic view over the roofs of the old town of Nördlingen, the city wall and the surrounding villages awaited us. It is interesting that there are still towers in the “Daniel” who call the former guardian call “So, G’sell, so!” from the tower room every half hour from 10 p.m. to midnight. In the past, the tower guards ensured the safety of the inhabitants from fire and enemies and wanted to use this call to ensure that all guards were on their posts. Today, the reputation has more of a traditional idea.

North of the Church of St. George is the cobbled market square. The bread and dance house, which served as a sales building for cloth merchants during the Pentecost mass, is a striking place here and as a ballroom. Directly opposite is the Gasthaus der Sonne, which was built in 1350 and has been used as a princely hostel since 1405. Famous personalities have already settled here in the past, among others various emperors, Johann Wolfgang von Goethe and the American astronauen of the Apollo-Moon-fahrtprogram, who have prepared for their mission here in the Ries.

The “Steinhaus zu Nördlingen” next to it has been the Town hall of the city and thus one of the oldest town halls in Germany. Like the Church of St. George and other townhouses, it was built from the porous Suevit rock of the Nördlinger Ries. In 1618, a representative staircase made of Suevit stone was added to the town hall.

During our tour of the city we could see many more beautiful buildings, such as the monastery near the harbour market, which was once a Franciscan monastery church and cornshrine and today houses a hotel and the Nördlinger Stadtsaal.

On the river Eger we could discover beautiful craft houses as well as a mill with water wheel in the Gerberviertel. In earlier years, the tanners combined their working and living space, thereby shaping this striking neighbourhood for centuries. From the second half of the 20th century, renovations and conversions were carried out into simple townhouses. The Nördlinger Gerberviertel is also considered one of the largest in Germany with some of the oldest Gerberhäuser. On our tour of the city we also passed the Catholic parish church of St.-Salvator, which is located on the southwestern edge of the old town.

We highly recommend the signposted historical tour through Nördlingen, as you can see the most beautiful highlights of the city in a short time!

You can download a map with all sights here as a .pdf version.