Just an hour away from us is the beautiful university town of Marburg. And yet we have never managed to visit the city. Now it was finally time: We explored Marburg as part of a 3-day short trip and were able to discover one or the other culinary highlight.

Things to know about Marburg an der Lahn

Marburg is a district town with about 76,000 inhabitants and is located in Hesse, about an hour’s drive north of Frankfurt. The Deutsche Märchenstraße, whose route since 1975 leads from the Hessian Brothers Grimm town of Hanau over 600 kilometres to Bremen in northern Germany, runs through Marburg, as the Brothers Grimm studied here. The approximately 25,000 students of Philipps University make up almost a third of the Marburg population – making Marburg a true university and student city.

For two nights we stayed in the luxury and wellness hotel VILA VITA Rosenpark, which is idyllically located directly on the Lahn in a well-kept, blossoming park and not far from the old town of Marburg. The hotel is a nice mix of an old grand hotel combined with modern elements – we really liked that. 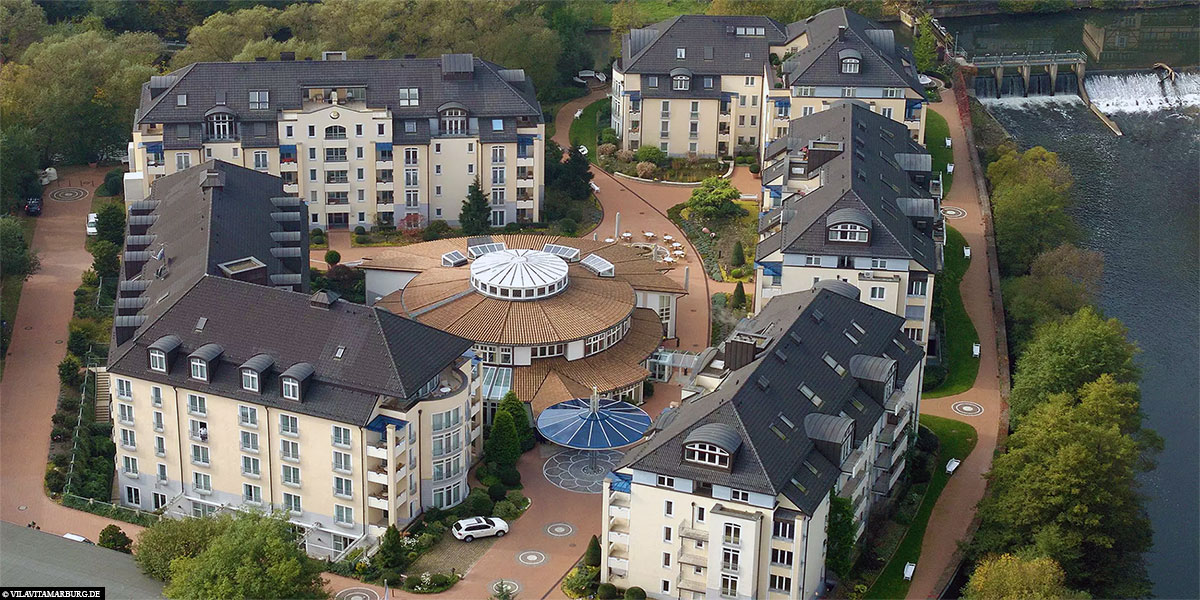 We arrived around noon, parked our car in the hotel’s underground car park and were positively surprised that we were already able to check in and move into our room. The hotel has a total of 196 hotel rooms and suites in three different categories (Comfort, Deluxe and Apartment). Our room was a 50 m2 Comfort Suite with separate living and sleeping room. Even when we entered the room, we felt totally at ease: bright, generously designed and a modern décor – exactly to our taste 😊 More details such as an included minibar, a coffee machine and cuddly bathrobes as well as bath slippers have completed our impression. Our room was located in the main house and so we had very short distances everywhere.

Directly in the hotel there are two restaurants, the Mediterranean Oliva and the traditional Zirbelstube (open seasonally), as well as the 360° Bar & Lounge. At Oliva we have taken our daily breakfast. Due to the Corona-related hygiene regulations, there was no normal self-service buffet, but you could choose the things you would like to have at a buffet and an employee then handed over the stuffed plate. We liked the variety of the breakfast buffet: from bread, rolls, croissants and cakes to cheese and cold cuts to fresh fruit & vegetables as well as various cereal variations, there was everything your heart desires. And best of all, in fine weather you can enjoy your breakfast on the summer terrace outside!

After a busy day of sightseeing, we let our soul dangle for a few hours in the Rosenpark Spa. The spa area is incredibly spacious: there is a pool and water area with Kneipprondell, various saunas and steam baths, a snow chamber, infrared seats as well as a lounge and relaxation area. Relaxation guaranteed!

Our short trip was accompanied by culinary delicacies of VILA VITA Marburg – a world of enjoyment with several restaurants, two cafés, an ice cream factory & bistro and a delicatessen in Marburg as well as a winery in Rhineland-Palatinate and an ice cream factory in Frankfurt. In addition, the Hofgut Dagobertshausen is an idyllicevent location with a large garden and its own congress centre. During our stay we were in different locations of the VILA VITA world of pleasure and were able to convince ourselves of the quality of the cuisine:

Bückingsgarten: After visiting the Landgrave’s Castle, we returned to the traditional economy, which is located directly at the foot of the castle. We got a nice place on the terrace and could enjoy here with a view of Marburg our food – a delicious Viennese schnitzel and a fresh summer salad with King Prawns.

Forest castles: The Waldschlösschen is located on the Hofgut Dagobertshausen, which is located just a few minutes’ drive from Marburg in a quiet location. In the cosy dining room of the half-timbered house we had a taste of handmade pasta and a schnitzel at noon and enjoyed the view of the surrounding idyllic landscape & nature. The restaurant has a large garden where you can sit outside in fine weather and a spacious children’s playground.

AROMA Ice Bar: Cheesecake, lavender blueberry, black vanilla, pumpkin seeds or salted peanut – the ice cream creations are madness here! We have certainly eaten every six scoops of ice cream in 3 days, because the ice cream here is simply fantastic and actually the most delicious and taste-intensive ice cream we have eaten so far in Germany. By the way, the AROMA was awarded by the magazine “Der Feinschmecker” as one of the top 15 ice cream parlours in Germany. Directly in front of the AROMA Eisbar is the corresponding AROMA Lahn Beach – a summer oasis in the middle of the city and Marburg’s only city beach.

What to see in Marburg?

From our hotel we were able to easily explore the main sights of Marburg on foot and on our own. Our walk through the city was very varied: it passed historic buildings, green oases, a picturesque old town and the picturesque Lahnufer.

The Elisabethkirche is the earliest purely Gothic church building in the German cultural area and is considered to be the most famous building in Marburg. The hall church was built between 1235 and 1283; it took another 50 years to complete the two 80 m high towers. In the late Middle Ages, the Elisabeth Church developed into an important pilgrimage site.

Marburg can be wonderfully discovered over the so-called Grimm-Dich-Path, which winds through the city with 16 stations. Here you will find mythical creatures and fairy-tale creatures in many corners, which adorn facades, alleys and stairs. During our tour of the city we were able to discover some figures of Grimm’s fairy tales, such as “The Wolf and the 7 Young Geisslein”, “Frog King”, “The Brave Little Tailor” and “Cinderella”. A great idea 🙂

The old town of Marburg is located on the Schlossberg above the Lahn. The centre of this district is the market square with the market fountain and the historic town hall of the city, built between 1512 and 1527. The Renaissance tower with the clock gable was added to the Gothic town hall in 1582. Above the town hall clock there is a gockel made of copper, which moves its wings up and down every hour.

Other sights in the Old Town include the Stone House and the remains of a medieval synagogue above the market square, the 12th-century Kilian – Marburg’s oldest church, which has not been a church for 500 years, but is now used as a residential building, the Lutheran Parish Church with its distinctive leaning tower, the small late-Gothic ball church and the calf gate – Marburg’s only medieval town gate today.

Very impressive is the building of the Old University, a professed annex of the Philipps University in neo-Gothic style. At the end of the 19th century, the building, now known as the Old University, was built on the foundations of the Dominican monastery, which was founded in 1291. However, the history of the university begins much earlier: in 1527, the Hessian Landgrave Philip the Magnanimous founded the Protestant University. This makes Philipps University the oldest surviving university, which dates back to a Protestant foundation.

Half-timbered houses in the Old Town

Around the historic town hall there are a large number of half-timbered houses which have been preserved by a long-standing, planned restoration concept. The medieval image of the old town is completed by the many stone-filled alleys and traffic-restricted zones.

High above the Marburg Upper Town is the Landgrafen Palace, which is one of the most important sights of the city. We walked from the old town via the Lutheran parish church and the Ludwig Bickell staircase up to the south gate and from there we started our tour of the castle grounds.

The Marburg Castle was built in the 11th century as a castle and is of great interest in art and architectural history due to its historical function as the first residence of the Landgraviate of Hesse. With the death of Landgrave Ludwig IV in 1604, the castle lost its importance as one of the main residences and served many other purposes in the following centuries, including the prison and the Hessian State Archives. Today, the castle is used in parts by the University Museum of Cultural History and for cultural events. A tour of the castle complex is possible as part of guided tours. We also explored the adjacent castle park as part of a walk. We particularly liked the rose garden here, which is lovingly laid out and in which hundreds of different types of roses can be found.

From the castle you have a beautiful view over the Lutheran parish church as well as the entire city. If you want to rest after the tour with a delicious meal or cool drink, in the Bückingsgarten below the castle is just right.

A popular excursion destination near Marburg is the Kaiser Wilhelm Tower, popularly known as the “Spiegelslustturm”. It is the highest point of the city and is located in the Lahnmountains. From here you can see a beautiful view over the urban area and the surrounding area. Particularly interesting here is the light art heart “Siebensiebenzwölfnullsieben”, which is attached to the top of the tower and bears its name by the birthday of St. Elizabeth, which is said to have been on 07.07.1207. If you want, you can make your heart glow with a landline number for a certain amount of money. Definitely a cool idea! 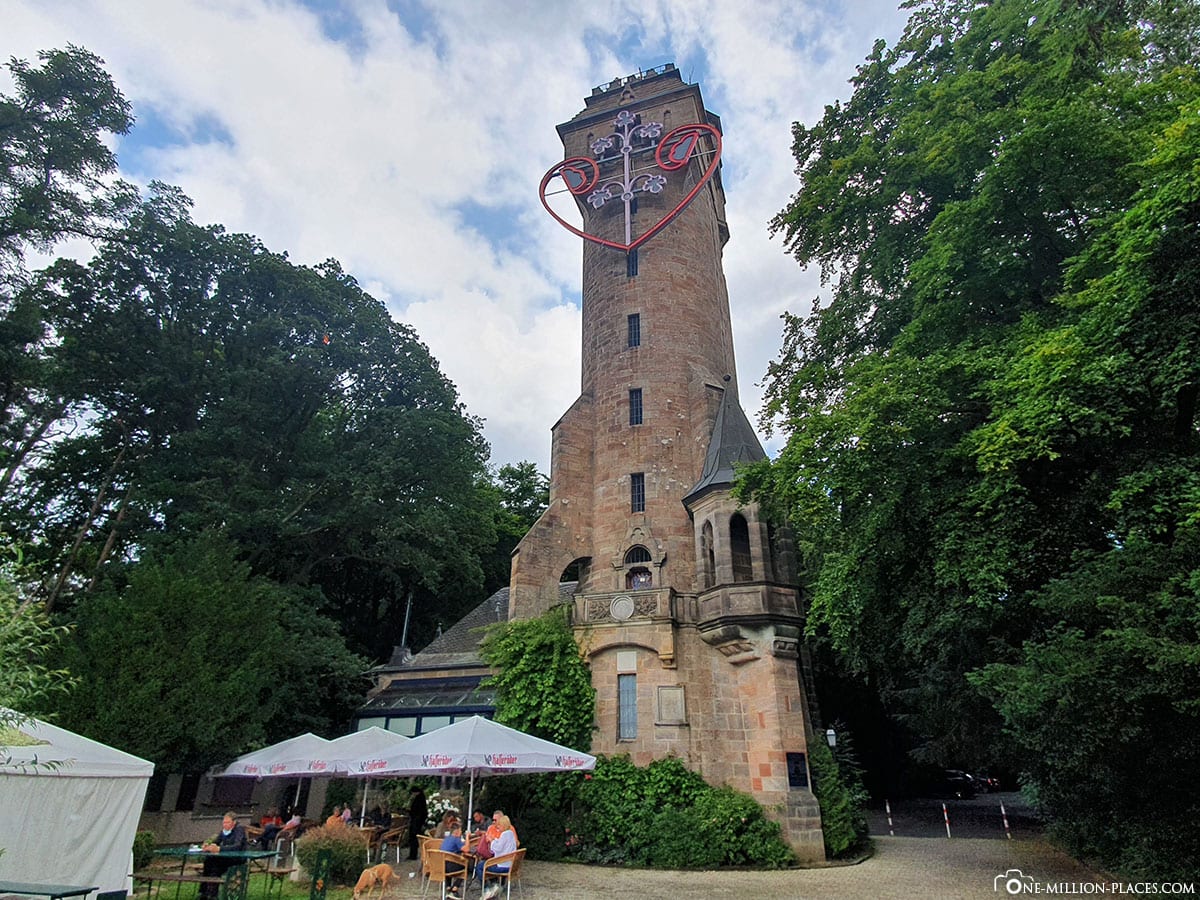 The district of Weidenhausen

The Marburg district of Weidenhausen is located on the left bank of the Lahn, directly opposite the city centre, and is one of the oldest settlement areas in the city due to its first documentary mention in 1235. The Weidenhäuser Straße is particularly impressive with its densely packed half-timbered houses, some decorated with beautiful wood carvings. We also liked the banks of the Lahn with the Trojedamm, which invites you to relax and walk.

About 20 minutes from Marburg is the beautiful Rauischholzhausen Castle, which you should definitely look at when you are travelling in Marburg and the surrounding area. The castle is located in the middle of an English-style 32-hectare park, which was built together with the construction of the castle between 1871 and 1876. From 1949 until today, the castle has functioned as a conference and training centre of the Justus-Liebig-University Giessen. 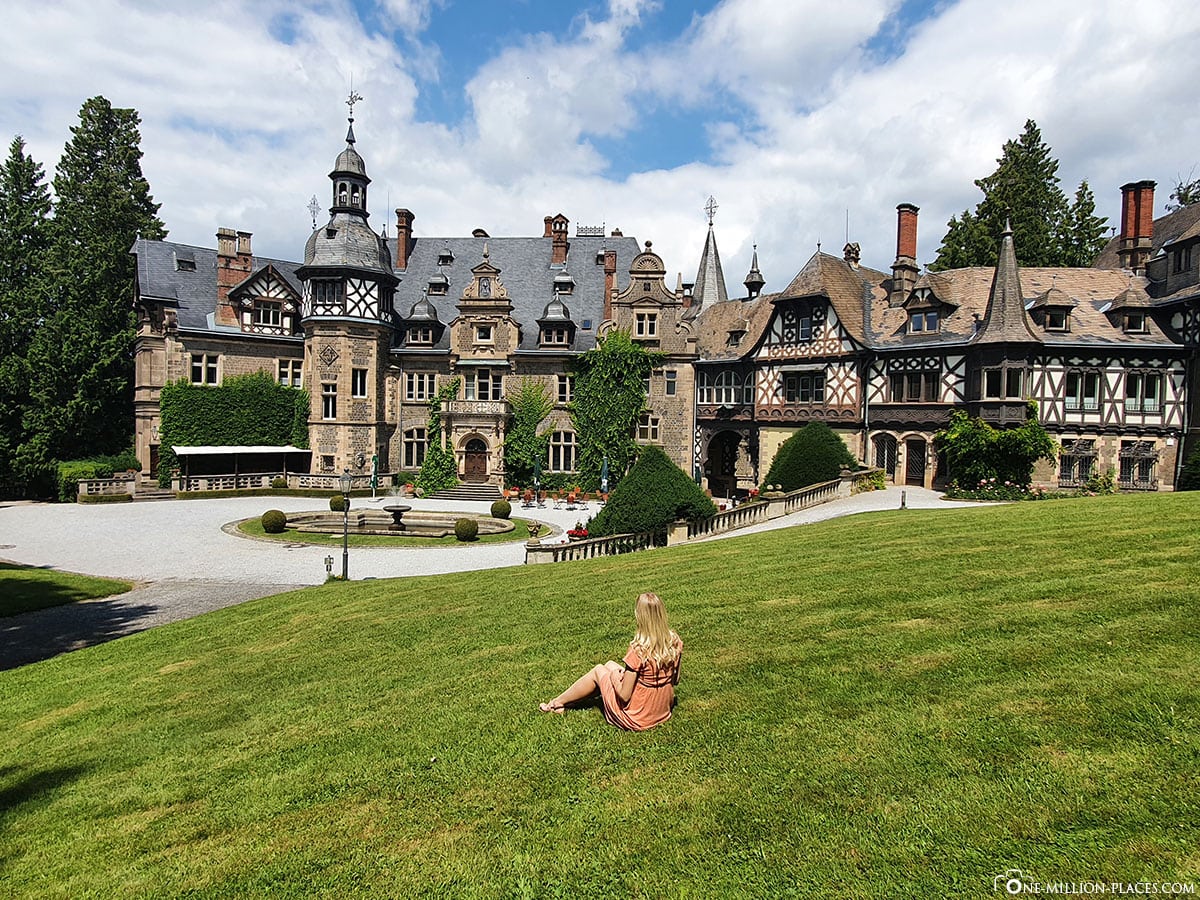 We enjoyed our three-day city trip to Marburg. Marburg is a charming town that can be explored on foot and has great sights to offer. The culinary highlights of VILA VITA Marburg have perfectly rounded off our sightseeing programme ❤

A map with all the sights in Marburg

On the following Google MyMaps map we have drawn our hotel, the most important sights and the most beautiful photo spots in Marburg.