In Germany alone there are more than 25,000 castles & castles. But no one knows that at the moment, because the federal states only keep their own statistics. However, this will soon change with a scientific database from the European Burgen Institute (EBI). But one thing is certain: with its unique architecture, its many towers and gables and its picturesque location, Eltz Castle is the epitome of a German knight’s castle for many visitors and is rightly considered one of the most beautiful castles in Germany.

The medieval castle of Eltz is one of the few fortifications in Germany that could never be conquered by force in its history and thus survived the wars almost unscathed. Only a fire in 1920 destroyed some parts of the castle, which could later be rebuilt.

Things to know about the castle

Elz Castle was built at the beginning of the 12th century in the valley of the Elzbach on a trade route. Since it was built on a steep rock head and was based on the rock formations during the construction, the castle rooms have a partly unusual floor plan.

The castle has been owned by the Eltz family for more than 800 years. In the middle of the 13th century, the castle was divided up and the separation of goods was divided between the three brothers of the Eltz family. A Ganerbenburg was built, in which the three family members lived and the partial buildings of the castle bore the names of the partial lines: Eltz-Kempenich, Eltz-Rübenach and Eltz-Rodendorf. Each of the three families built their own part of the castle over the years. As a result, the castle complex is densely built with a variety of turrets and bay windows. But that is exactly what looks most beautiful today and makes the castle unique.

In 1815, the castle became the sole possession of the main line Eltz-Kempenich, as the other shares could be bought. The current owner is Karl Graf and Edler Herr von und zu Eltz-Kempenich, called Faust von Stromberg, and belongs to the 33rd generation since the castle was built. Due to its considerable age, the castle must of course be regularly repaired. The last major restoration took place between 2009 and 2012, during which renovation work in the amount of 4.4 million euros was carried out. 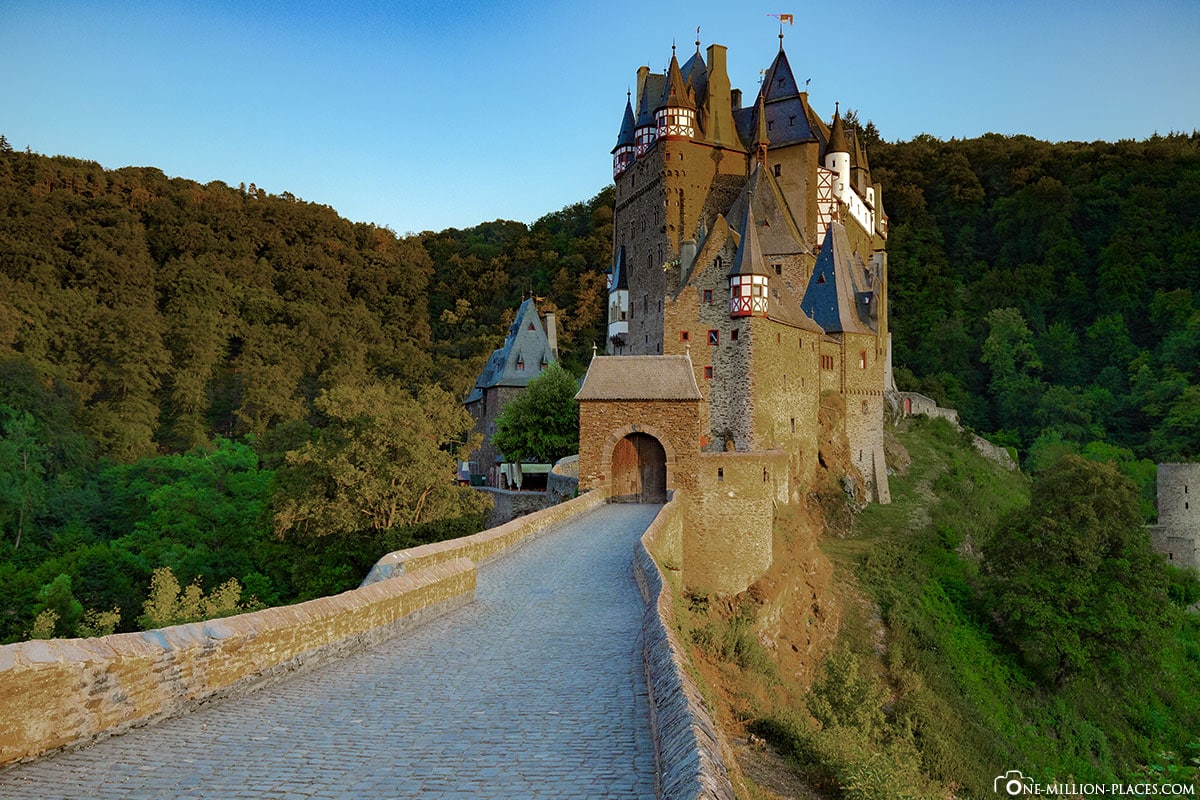 Eltz Castle is located in the municipality of Wierschem (Mayen-Koblenz district) in Rhineland-Palatinate and is completely enclosed by 300 hectares of the Eltzer Forest. The castle is surrounded on three sides by the Elz and rises on a rock up to 70 meters high. By car you drive to the village of Wierschem. From there, the path to the castle is signposted. On weekends and public holidays there is also the “RegioRadler Burgenbus” (public transport-burgenbus line 330). More information can be found on the page RegioRadler.

The parking lot is located at the end of the “Burg Eltz Strasse” and is large enough. Parking costs 2 euros, with a motorhome you pay 4 euros.

There are 2 hiking trailsto get from the car park to Eltz Castle.

An asphalted track
(pink)
, which is also the way for the shuttle bus at the same time. This 800-metre-long path is partly quite steep, but you can get to the castle from the car park in only about 10 minutes. Before that you pass a small viewing platform, from which you have a great view of the castle from above. If you want to walk this way, it is best to drive the parking lot as far as possible to the end.

The other hiking trail
(blue)
leads from the parking lot more through the forest and is with 1.3 kilometers in total a little longer. But the path is not quite so steep and you get out sideways at the castle. However, this path is not suitable for strollers. If you want to try this way, it is best to use the parking lot on the right.

Of course, there are many more hiking trails to Eltz Castle. A quite good overview (also for challenging hikes) can be found here. 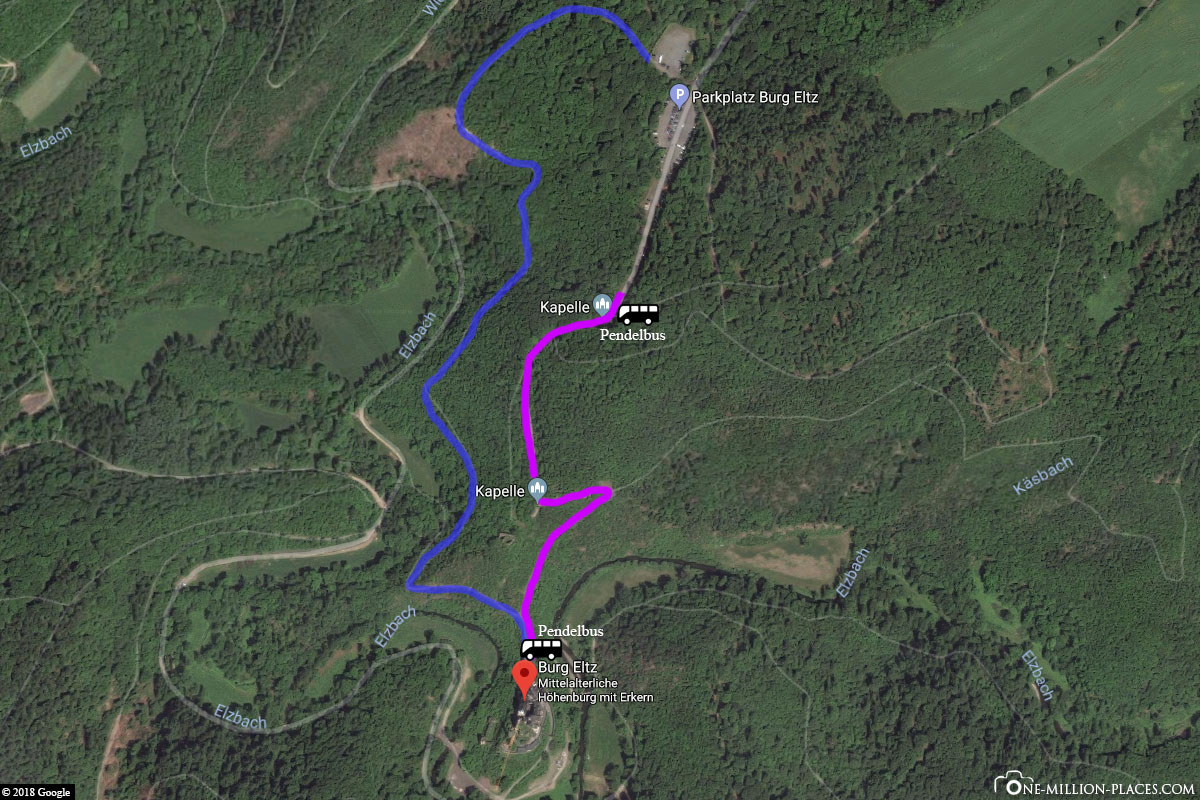 The hiking trails from the car park to Eltz Castle

If you don’t want to walk the way from the parking lot to the castle, you can also take the shuttle bus. This starts at the barrier at the end of the parking lot at the St. Anthony’s Chapel and costs 2 euros per trip.

The entrance fee for the castle tour and the visit to the treasury is 10 euros per person. Pupils and students pay 6.50 euros and the family card (2 adults – from 2 children) costs a total of 28 euros. By the way, you can look at the courtyard of the castle without admission, which is really great.

Photographing is unfortunately not allowedduring the castle tour in the interiors and rooms of the castle Eltz. This requires a special photo permit from the castle administration, which we have obtained in writing in advance. Outside the castle and also in the courtyard, photos can of course be taken. Drone footage of the castle and the entire site is strictly forbidden and there are also signs everywhere.

The castle as a motif on the 500 DM banknote

What some may remember: Eltz Castle was for years the motif on the back of the German 500 DM note, symbolizing “German chivalry”. This series of banknotes was issued from 1961 to the early 1990s. Well, who remembers? 😉

The castle Eltz on the old 500 DM banknote

The castle Eltz at sunset

All in all, we went to Eltz Castle twice this weekend: once on Friday evening at sunset and then the next morning for the castle tour. In the rush hour between 11 a.m. and 3 p.m. it can get very crowded at the castle. Outside these times, with a little patience, the castle has been 🙂

At sunset we were in the parking lot around 8 p.m. and from there we walked the slightly longer hiking trail to the castle.

In recent months we have seen Eltz Castle very often by various influencers as a photo motif on Instagram or Facebook. The long way, the gate, the fairytale castle and the dreamlike location simply give a beautiful motif. And of course we had planned to take such a beautiful picture for our Instagram channel… and hopefully we have succeeded quite well 🙂 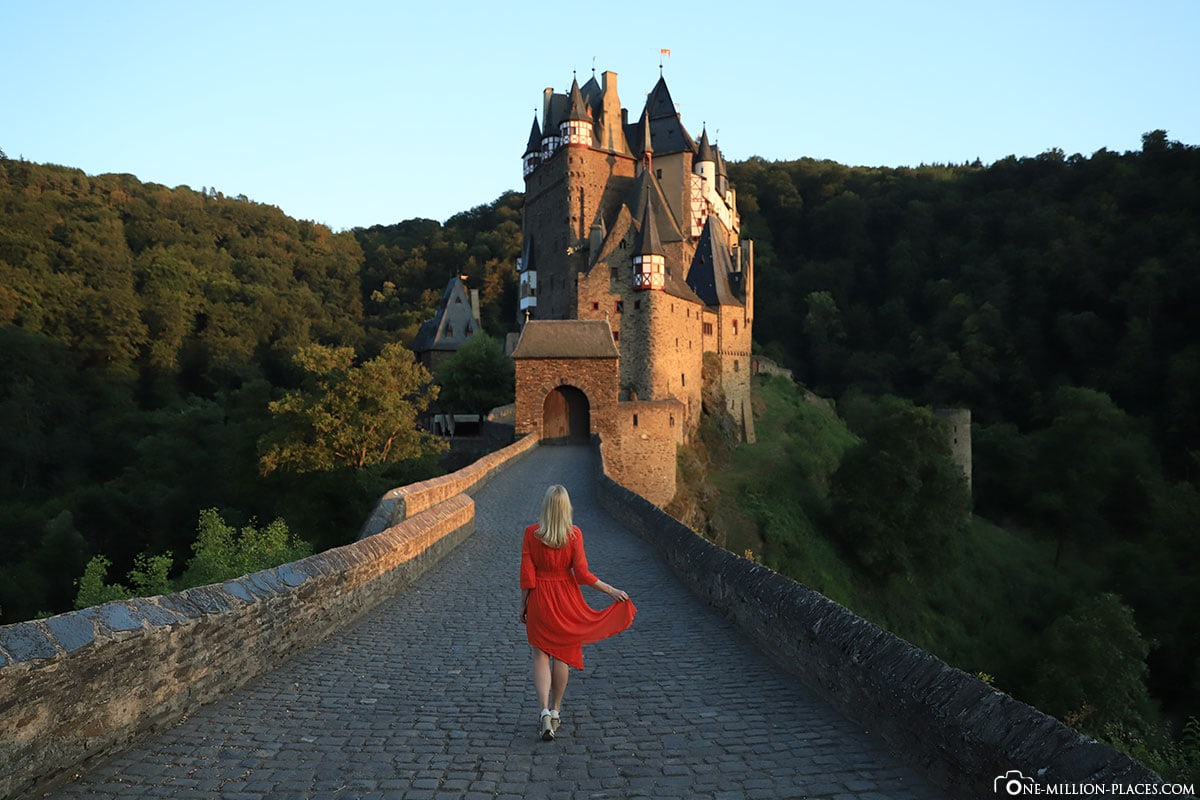 A guided tour of Eltz Castle

For the tour of the castle we were at the parking lot shortly after 9 o’clock and were amazed that for a Saturday in the summer holidays not many people were on the way. This time we walked directly along the asphalted track and were 10 minutes later at the almost empty castle. The only thing that can disturb the photo motif here is the cars for deliveries. But if you are a little patient, you have a good chance to make a beautiful picture around this time 🙂

In total, the castle has 80 rooms, today 12 rooms can be visited as part of the castle tour. The rooms are located exclusively in the Rübenacher and Rodendorfer Burgteil. The Kempenicher Haus is now used by the castle administration as well as privately by the family of Eltz and is therefore not open to the public.

As part of the guided tour, you will get an impression of the chivalrous way of life and home décor and see many furniture and works of art, all from the eltz family’ property – a real journey through eight centuries of history. The following rooms can be seen during the tour of the castle: Armoury, Rübenacher Untersaal, Rübenacher Obersaal, Dressing Room, Writing Room, Elector’s Room, Knight’s Room, Angel Room, Wambolt Room, Comtessenzimmer, Fahnensaal and the Rodendorfer Küche.

The most famous work of art in the castle is the world-famous painting “Madonna with Child and Grape” painted by Lucas Cranach the Elder, which is located in the Rübenach lower room.

By the way, the guided tours take place every 10 to 15 minutes and last about 40 minutes.

The treasury of Eltz Castle

The entrance fee also includes a visit to the Eltzer armoury and treasury, which is located in the Rübenacher Keller. With more than 500 exhibits from eight centuries, it is considered one of the most important private collections in the world. Here you will find gold and silversmithwork, valuable porcelain and glass, jewellery, weapons of war and other memorabilia.

Around 12 o’clock we were finished and then took the shuttle bus back to the parking lot at 35 degrees. In the meantime, it has become much fuller on the castle grounds and in the castle. Overall, we found the visit to The Castle Eltz really great. A trip here is definitely worthwhile 💗 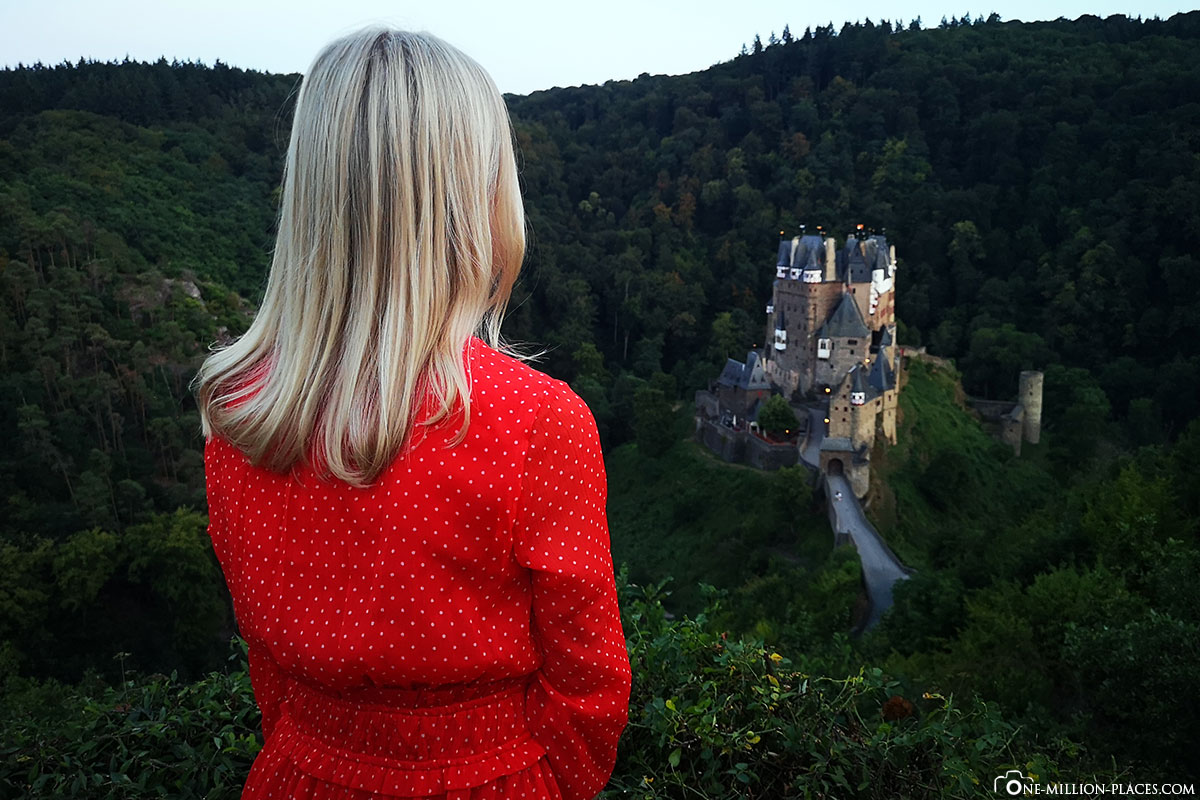 View from the observation deck to Eltz Castle