After we had already made a hike over lava fields and could see flowing lava up close and taking a bike tour to the Kalapana Lava Viewing Area, it was now time to see the Ocean Entry of the current lava flow vis-a-vis with a “Lava Boat Tour”.

Choosing a suitable tour operator for such a Lava Boat Tour was not so easy. After all, most companies offer the same at a similar price. We took a bit of a look at TripAdvisor ratings and then got stuck with Kalapana Cultural Tours. Ultimately, however, the decisive point was that the company had a brand new faster boat that would keep you with the Ocean Entry for longer – at the same price as with a normal boat. So we quickly decided to do it and booked two tickets.

The cost of a Lava Boat Tour is really beyond good and evil. We’ve paid a whopping 225 US dollars for it, but if you really want to see glowing hot lava flowing into the ocean, that’s the only way. You’re ready to put that amount on that.

Our tour started at 4.15 p.m. and all visitors should arrive at the meeting point about 45 minutes in advance. To do this, we had to drive to Isaac Hale Beach Park, which is located at the eastern tip of Big Island. By the time we arrived, most of them had already gathered in front of the ship “Ohana”. The ship was standing on a trailer in the middle of the meadow – it looked kind of funny. But it was going to be even funnier, because after a short briefing and various information we could all get on the boat and it started. So we were all in the boat, the boat was on the trailer and we weren’t in the water yet. A pick-up truck drove us to the shore a little later and drained into the water. 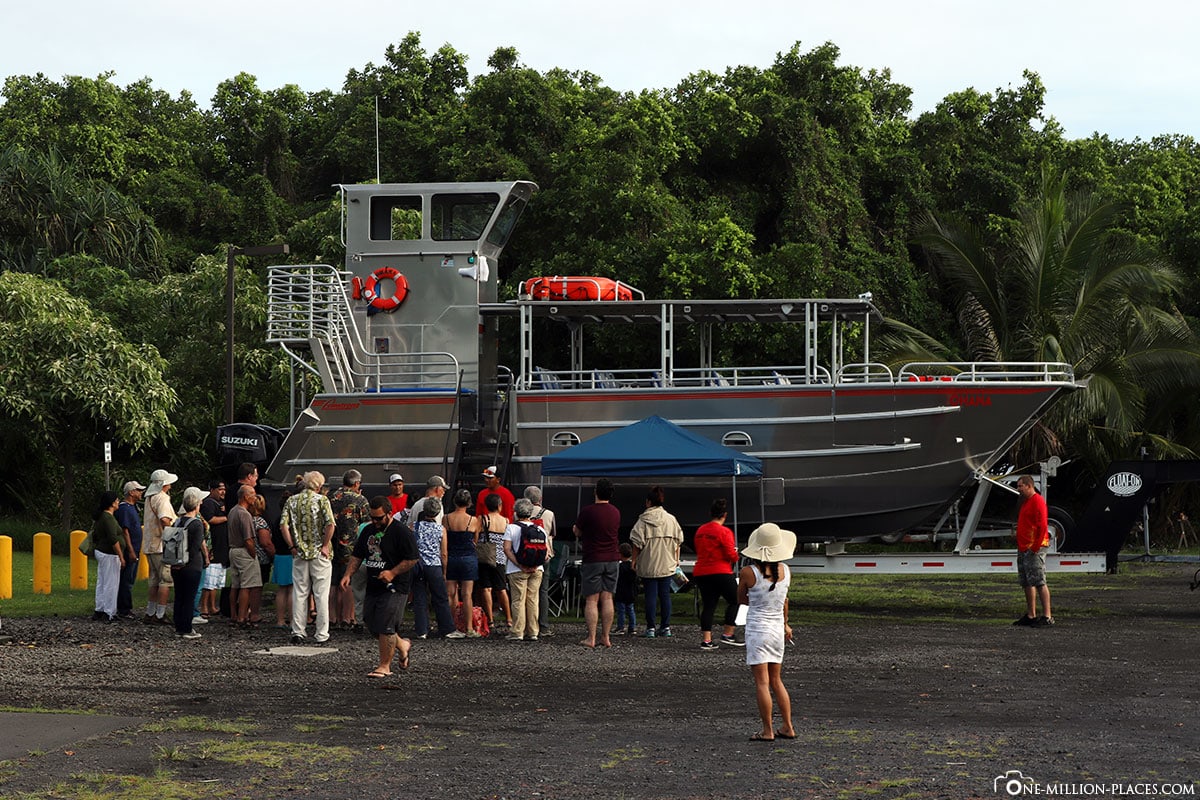 The boat of Kalapana Cultural Tours

There were an estimated 40 people on our boat. That’s quite a lot and we were terrified when we saw the mass of people. Disillusionment first spread, because we thought that we probably wouldn’t see much of the lava.

Our tip: In order not to become seasick, it is advisable to get a few tablets against seasickness beforehand. This is available in every pharmacy of Ratiopharm or Aliud . After we got extremely seasick during a boat trip to the Galapagos Islands, we take these tablets every time we drive on the water, where it can get a little more violent. And since then we have never again become seasick 🙂

Dolphins during our boat tour

A few minutes later the ride started and the captain put a tooth and floated over the water. A short time later, he suddenly drove very slowly and we heard the crew screaming “Dolphins! Dolphins!” All eyes were on the water. And behold, right next to our boat several dolphins gathered and swam with us. How great. We didn’t expect that at all during the tour. The captain certainly stayed at the place for ten minutes and turned the boat again and again so that the people on each side could see the dolphins.

The journey along the coast

But since our goal was actually a different one, we quickly moved on again. It passed high, steep cliffs, beach parks and beautiful houses until we got close to the Ocean Entry. Shortly before, we saw old, empty lava tubes on the cliffs. The lava flows flow underground to the sea. It’s hard to imagine what that might look like when a swell of liquid, hot lava comes out here.

Small tip: You should definitely take a jacket with you on the tour, because the rough wind on the ocean can be violent and cool, especially if you are speeding over the water at full speed.

The Kamokuna Ocean Entry of the 61g Lava Flow

From some distance we saw a very small boat at the site of the Ocean Entry, on which only five guests sat. This is of course great to be able to get very close to the Ocean Entry. But you also have to be seaworthy, because on such a small boat it wobbles much more violently. When the small boat made way for us, we got to the train and were able to get close to the Ocean Entry, which is called the Kamokuna Ocean Entry of the 61g Lava Flow. And it didn’t take a second for the pure disappointment to spread on our faces. Far and wide nothing to see, no lava, no steam, nothing at all. And that’s what we spent so much money on per person?

With the small boat we took turns again and again – once they were allowed close to it, once we. It went about an hour until we could finally see a bit of glowing lava. But it was still felt so far away from the ocean that we could never have imagined that we would still see until it flows into the ocean.

The hot lava flows into the sea

A quarter of an hour later we could also see lava in some other places. So there were several small breakouts. But it dawned so slowly. In the meantime, the small boat had already left for the harbour, another boat from the same tour operator as well. Only our boat waited before the Ocean Entry, hoping that some lava would flow into the ocean.

So it was really a good decision that we had decided on the new boat, because it stays here for longer. And the crew closed all eyes and waited until at some point the lava touched the sea and slowly flowed in. All the people on the boat were screaming and were completely out of the house. A great experience! Sometimes it’s just worth waiting. 🙂

Around 7.30 p.m. we were back at the harbour in the dark. With a smile on his lips, we went back to the hotel in Hilo. We were really happy that we could still see the lava kissing the ocean. What a day! 🙂

It is definitely a great experience to get so close to the lava from the water! However, the price is also quite high at just under 200 €. If you want to see lava even closer, then we definitely recommend a guided lava hike. Here you can really get up to a few centimetres of the lava! Our detailed report with many pictures can be found here.