Sometimes it is not so easy to find hidden spots in touristically high-frequency countries that you have for yourself. And yet this is possible 🙂 With the Rock Pool we discovered such a place and became aware of it by chance on the Internet when we googled for sights for Mahé. But we didn’t actually find many information about it – google pictures only contain a handful of photos of it. This, of course, has awakened our curiosity to find and discover this hidden place.

What is a Rock Pool?

If you ask Wikipedia about the meaning of a rock pool,you get the statement that this is a man-made swimming pool, which is located near the coast on rocky ground. These are particularly common in Australia and the UK. But if you look a little further, you come across the term “tidal pond”, which are also located on rocky coasts – and that is rather what we found here on Mahé. Both have the common alinity, however, that they are not permanently supplied with fresh water from the sea, but only receive water replenishment at high tide.

The location of the Rock Pool on the island of Mahé

The Rock Pool is located in the southern part of Mahé, near The South Coast Road. It is located on the edge of a granite slope that connects the rugged coastline of Takamaka with the Anse Intendance.

With our rental car we first drove to the Chez Batista Villas, which can be reached within a few minutes when you leave the South Coast Road in the Takamaka region to the west. The restaurant and guest house are located at the southern end of Anse Takamaka. After we had parked our car directly in front of the restaurant, we first welcomed the inhabitants of Anse Takamaka: a group of giant tortoises, which are housed here in an enclosure.

When we were at noon at the low tide at Anse Takamaka, the beach was well visited, but not crowded. The beach is about 20 meters wide and about 500 meters long. Since we were here at low tide, you could also see the full splendor of the beach. However, when there is a flood, this can change drastically. At the other end of the Anse Takamaka leads directly along the road and we have seen that the road there already needs to be supported and repaired, because the erosion due to the flood – which partly comes to the road – is very strong.

The trail to the Rock Pool

On the Internet we have found in advance hardly any information about the hiking trail to the Rock Pool. Only the information that the start is at the Chez Batista Villas has helped us. So we asked a staff member at the bar where exactly the trail starts and got a helpful description. The start of the hike starts on the left side of the last house at Anse Takamaka. 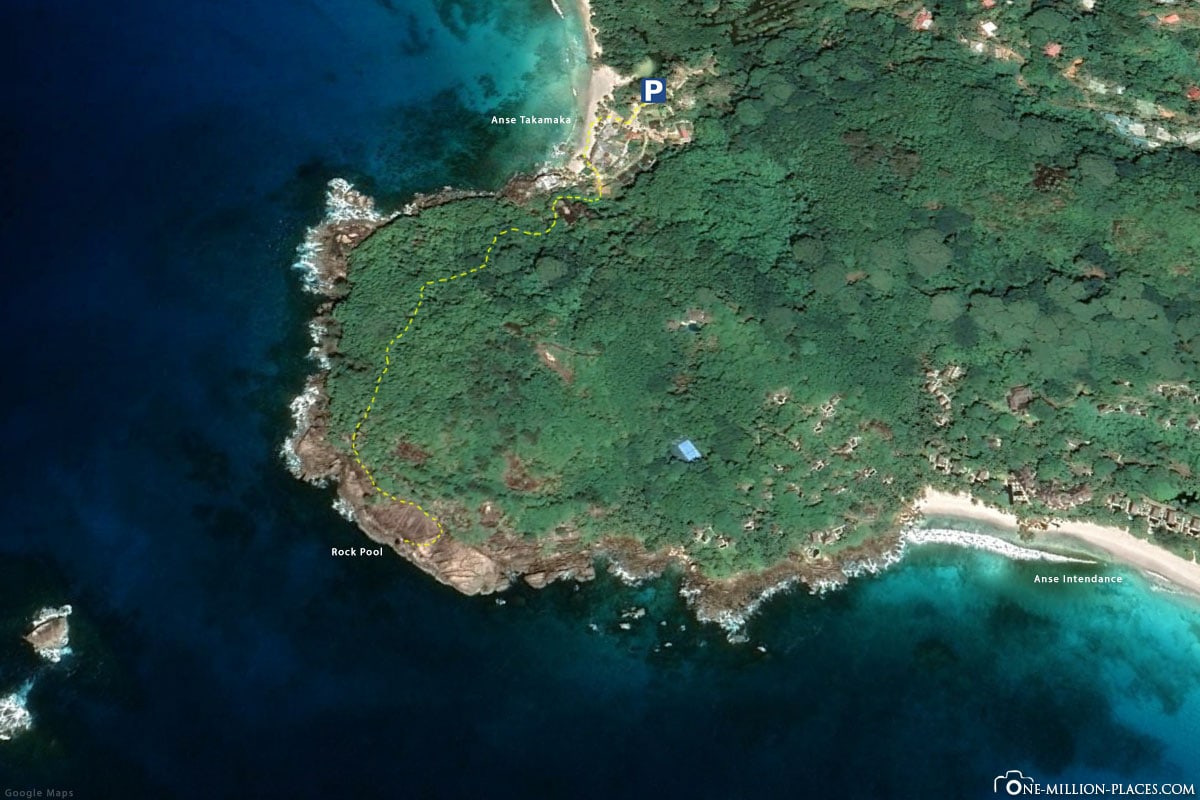 The trail to the Rock Pool on the island of Mahé

The start of the “hiking trail” looks like a small construction site, but you must not be fooled here, because you are then on the right path. By the way, there is no sign here. First we went through meter-high grass until after a few meters we stood in front of large water tanks. And from here begins a small ceded path through the forest. We have really just followed the ceded path, hoping to be right here. In between, we met four people who were also at the Rock Pool and from that moment we were completely alone.

In between, we got a little lost, but then quickly found the right way again. It passed large Grantis rocks, we had to climb partly over rocks, cross fallen palm trees … have come closer to the coast, but sometimes the path has moved away from the water. In some places there are even waymarks – mostly we have seen them on granite rocks marked with arrows or white dots. We knew we were back on track 🙂

When we reached a large rocky plateau, we had almost made it. But we didn’t know that at that time, because the Rock Pool is unfortunately not visible from the plateau! So we went past it and almost got lost a little bit. Until we came up with the idea to let our drone climb on the plateau and hope that this will help us locate the Rock Pool better. And that’s exactly what worked out great, because we were able to see the exact location of the pool.

During the hike you should definitely wear sturdy footwear! From time to time you have to climb over high granite rocks and through crevices. On our hike we met two tourists who had even got a little injured while climbing. That is why extreme caution is really required here!

And then, after about 30 minutes of hiking, we finally had him in mind: the Rock Pool of Mahé. It lies below the large rocky plateau directly above the coastline. We were very lucky, because when we were here at lunchtime, it was just low tide and so the pool was freshly filled by the tide and you could bathe in it relaxed, because you didn’t have to be afraid that strong waves would swell up from the sea towards the pool.

The pool – which we also found on the internet under the name Ros Sodyer – had crystal clear water and was filled with some fish and crabs. We estimate that it was about 6 to 8 meters deep – you could see the bottom with the naked eye due to the good visibility – and had a diameter of about 5 to 6 meters.

We were at the Rock Pool for about 1.5 hours and were completely alone during that time. With such a great place, actually unimaginable. This was the perfect time to unpack and fly our drone DJ Mavic Pro 2. And with her we were able to make some super nice shots.

Swimming in the Rock Pool is a great experience – but only to enjoy with the utmost caution! This was only possible with us, because at that time there was a high tide and so the sea did not spill over the cliffs. Only then is bathing possible. If the water swells over the cliffs into the pool, there is a danger to life, as the waves can pull you back into the sea over the cliffs. That is why extreme caution is really required here!

The – sometimes arduous – hike to the Rock Pool was definitely worth it. We have never seen anything like this on our travels before and were overjoyed that we found the pool. Definitely one of our highlights on Mahé ❤ 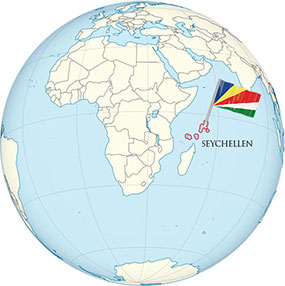