We spent 3 days in the beautiful Siegerland to explore some of the most famous sights of the region in the Rothaargebirge. Starting with the half-timbered town of Freudenberg, the city of Siegen, on to the tranquil Bad Berleburg and out into nature to the Bison Wilderness and the Kühhude Suspension Bridge on the Rothaarsteig hiking trail.

Things to know about the Siegerland

The historic Siegerland includes the altkreis Siegen of today’s Siegen-Wittgenstein district in North Rhine-Westphalia. The district was founded on 1 January 1975 as the legal successor of the previously independent districts of Siegen and Wittgenstein and includes cities such as Bad Berleburg, Hilchenbach, Neunkirchen, Burbach, Erndtebrück, Wilnsdorf, Netphen, Kreuztal and Freudenberg. In the region, which extends over a total of 650 square kilometers, live together about 240,000 inhabitants.

In the north, the district of Siegen-Wittgenstein borders on the Sauerland, in the west on the Bergisches Land and in the south on the Westerwald. Since 2015, the 3826 km² Sauerland-Rothaargebirge Nature Park has been located here, which in addition to the southeast of the Sauerland, the majority of the Wittgensteiner Land also includes the extreme east of the Siegerland and the extreme northwest of the Hessian hinterland. 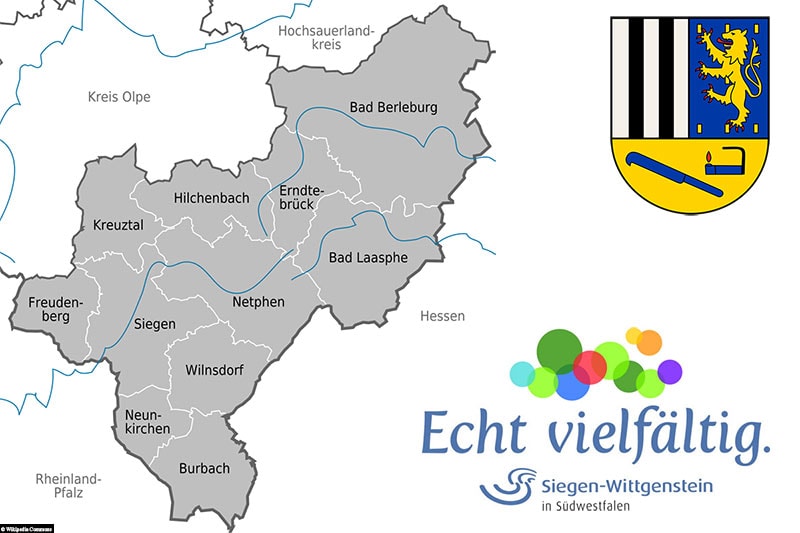 The half-timbered town of Freudenberg

One of the most photographed sights in the Siegen-Wittgenstein district is the half-timbered town of Freudenberg. The city is known above all for its unique, almost closed half-timbered ensemble. In the old town centre, which is also called “Alter Flecken”, more than 80 black-and-white half-timbered houses are still lined up close together and thus form an impressive backdrop. After the city burned down for the second time in the 17th century and the citizens rebuilt their houses, they were all built gable to the streets. The resulting characteristic appearance is now a perfect postcard motif.

Our detailed travel report about Freudenberg with many more pictures can be found here.

The city of Siegen

The city in the Siegerland impresses with a historic city center, 2 castles and a church with an attached crown of gold. The city is located in the middle of a green hilly landscape in an extensive valley basin. Directly through the city center flows the eponymous river Sieg, whose name “Sikkere” is of Celtic origin and means as much as “fast river”. Already in the Middle Ages, the city had a mighty city wall with 16 towers and three large city gates. Unfortunately, there is not much left of it today. During the Second World War, around 80 percent of the city was destroyed and only a few historic buildings such as the two castles and several church buildings have been preserved. The 53-metre-high church tower of the Nikolaikirche bears the “Krönchen”, the landmark of the city of Siegen, a crown made of iron and gilded with a diameter of over two metres from the 17th century.

We started our city tour in the old town of Siegen, then visited the Upper Castle with the castle park and walked from there back over the market square with the Nikolaikirche to the Lower Castle. You can read our complete travel report about the city of Siegen here.

The town of Bad Berleburg

In the middle of the Sauerland-Rothaargebirge Nature Park, surrounded by the largest contiguous forest area in Germany, lies the 750-year-old residential town of Bad Berleburg. The town, which today has 19,000 inhabitants, used to be the ancestral seat of the former county and principality of Sayn-Wittgenstein. In the course of time, the place developed into a recognized Kneipp spa with a variety of modern rehabilitation clinics. Since the beginning of the 20th century, the charming climate of Bad Berleburg has been used therapeutically. The city has been allowed to use the additional designation “Bad” since 1971, 3 years later it was recognized as a “spa”.

We started our small tour through Bad Berleburg in the core town, which lies on the right and left on the slopes of the valley of the river Odeborn. Here you will find, among other things, the train station, the market square and the Ludwigsburg. From the market square we walked on to the upper town, which is largely characterized by well-preserved slate-roofed half-timbered houses, the listed Protestant city church and Goetheplatz.

Also in the upper town is Berleburg Castle, built in 1258. Unfortunately, this had closed, so that we could only briefly visit the outdoor areas such as the courtyard of honour, the gatehouse and the orangery in the castle park. If you want to watch a small image film about the city of Bad Berleburg, you can watch this video on YouTube.

The suspension bridge Kühhude on the Rothaarsteig

We parked our car in the free parking lot “Wanderportal Kühhude” at the end of the Homrighäuser Weg in Bad Berleburg (location in Google Maps). From there you walk along the Rothaarsteig through a beautiful forest section. The 154-kilometre-long Rothaarsteig is considered one of the most beautiful high-altitude trails in Europe. The so-called “Path of the Senses” begins in Brilon and ends in Dillenburg, Hesse.

From the parking lot, after 600 meters, you can reach the sculpture “Stein-Zeit–Mensch”, which belongs to the WaldSkulpturenWeg where internationally renowned artists have created an art trail with their works of art along the way, which is unique, at least in Germany.

From the sculpture it is only 300 meters to the suspension bridge Kühhude. The 40-metre-long wooden bridge leads over a small valley incision of densely overgrown trees. We walked back and forth over the bridge and took some nice pictures. Afterwards we walked back to the car in about 20 minutes.

The bison wilderness on the Rothaarsteig

A unique nature project has been running in the Wittgensteiner Land since 2013: here you can experience bisons, the largest land mammals in Europe, up close. The bison – also called European bison – is a European cattle species and roamed through European forests a very long time ago. But since the Middle Ages, their habitat has been threatened by humans. In Poland, the last wild bison in the world was exterminated in 1919, only a few animals survived in captivity.

Shortly thereafter, the International Society for the Preservation of the Bison was founded. This society tracked down all living bisons in wildlife parks and zoological gardens and began conservation breeding. Thanks to this breeding program, there are now again 40 herds with over 3,200 wild bisons in eight countries. The largest, free-living population is found in the jungle of Bialowieza in Poland. Other herds live in Ukraine and Russia – and since 2013, free-living bisons can be found again on the Rothaarsteig in Germany.

The project area “Wisent-Welt” is located in the forest of the North Rhine-Westphalian Rothaargebirge in the district of Siegen-Wittgenstein. There are two herds of bison: a herd of about 25 animals lives freely in parts of the forests of the Rothaargebirge. So that visitors do not have to go on hours of hikes to catch a glimpse of a bison, the largely natural show enclosure “Wisent-Wildnis” near Bad Berleburg has also been set up. The park is open in summer (April to October) Tuesday to Sunday from 10 am to 5 pm, in the winter months (November to March) from 10 am to 3 pm. On Mondays, the wilderness is closed to visitors. The entrance fee is 5.50 EUR for adults and 3.50 EUR for children. Up to a height of 100 cm, admission is free. Parking is available free of charge.

In the entrance area there is the Wisenthütte, as well as seating and the ticket booth. From here, an approximately three-kilometre-long signposted adventure trail leads through the 20-hectare site. You walk mainly on natural paths through beautiful nature and past fences, from which you can observe the bisons. However, where you see the animals and how close or far away they are is of course a matter of luck. We were able to discover the majority of the herd in a large open space 🙂

The further hiking trail winds up and down along the large outdoor enclosure and you always have great views of the Rothaargebirge. By the way, the circular route is not suitable for strollers, you should put on sturdy shoes and plan a good 1 to 1.5 hours for the hike. By the way, we found the “Bison Quiz” great for the little ones: along the way you will find nine small boards with different questions about the bison. If you find out the solution word, you can win prizes (ask in advance at the checkout). A clear map of the “bison wilderness” and the hiking trail can be downloaded here free of charge as a .pdf version.