Every year, 11.9 million visitors from all over the world flock to Heidelbergto see the historic old town and its world-famous sights. Heidelberg Castle is one of the most famous ruins in Germany and at the same time the symbol of the city. Since we live only about 60 km from Heidelberg, we have often been to Heidelberg and now finally want to write a report on the beautiful city on the Neckar, whose most important sights are all very centrally located, so that the city is good in one day and can explore on your own.

Things to know about Heidelberg

Heidelberg has about 160,000 inhabitants and is considered one of the most famous German student cities. After all, about 30,000 prospective academics study here. Heidelberg University was founded in 1386, making it the oldest university in Germany and one of the oldest in Europe. The university occupies a leading position in many fields of study, including medicine, life sciences, physics, chemistry and mathematics.

Heidelberg is the fifth largest city in Baden-Württemberg and lies in a valley floor mainly on the left bank of the Neckar. The highest elevations are the Königstuhl (568 m), the Heiligenberg (445 m) and the Gaisberg (375 m).

The city of Heidelberg in Baden-Württemberg

The most famous sight is Heidelberg Castle which is located above the old town on the northern slope of the Königstuhl. The ruins of red Neckar valley sandstone rise 80 meters above the valley floor of the Neckar and dominate from there the image of the old town. The castle ruins are an important German cultural monument and served from the 13th to the 18th century as the residence of the Electors of the Palatinate.

In 1225, the castle was mentioned for the first time and almost every elector has since added a building in a different style. In the 16th century, the medieval castle was expanded into a representative Renaissance castle. These buildings are among the best that Renaissance German architecture had to offer. In 1689, the impressive castle was destroyed by the soldiers of Louis XIV and blown up 4 years later by French pioneers. Due to two lightning strikes in 1764, the remains burned out for good and became a ruin. 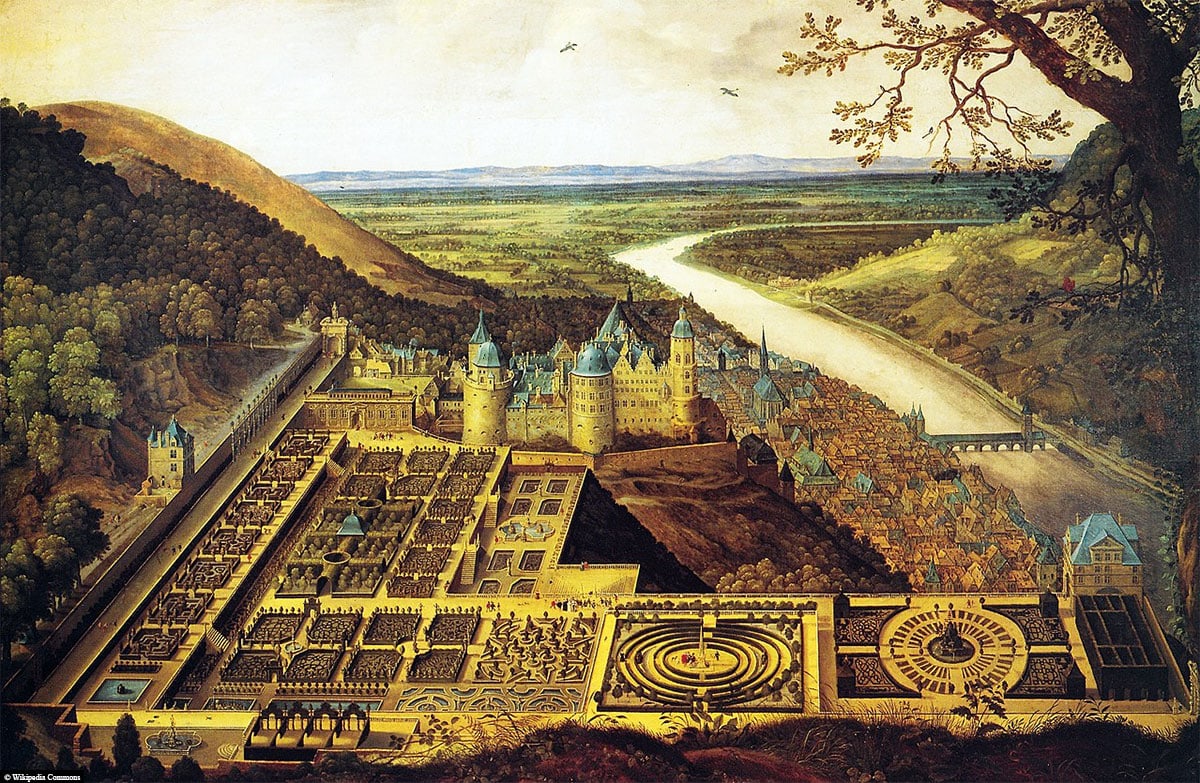 How to get to the castle?

From the old town in Heidelberg there are several ways to get to the castle:

2. Walk and take the Burgweg, which starts to the left of the valley station of the mountain railway at kornmarkt on Zwingerstraße. The footpath over uneven cobblestones is quite steep with a slope of up to 26%, but not so long (about 400 meters). Here you reach the lower entrance of the castle.

3. You can also walk the almost 400 steps of the “Kurzer Buckel”, which also go off to the left of the mountain railway building and come out directly at the top of the visitor center of the castle.

4. By car you can park directly above the castle garden. There are over 100 public, paid parking spaces here.

In general, it should be noted that many parts of the castle and the outdoor facilities are not suitable for wheelchair users or for a stroller. We have found a good overview map of accessibility here as a .pdf version. 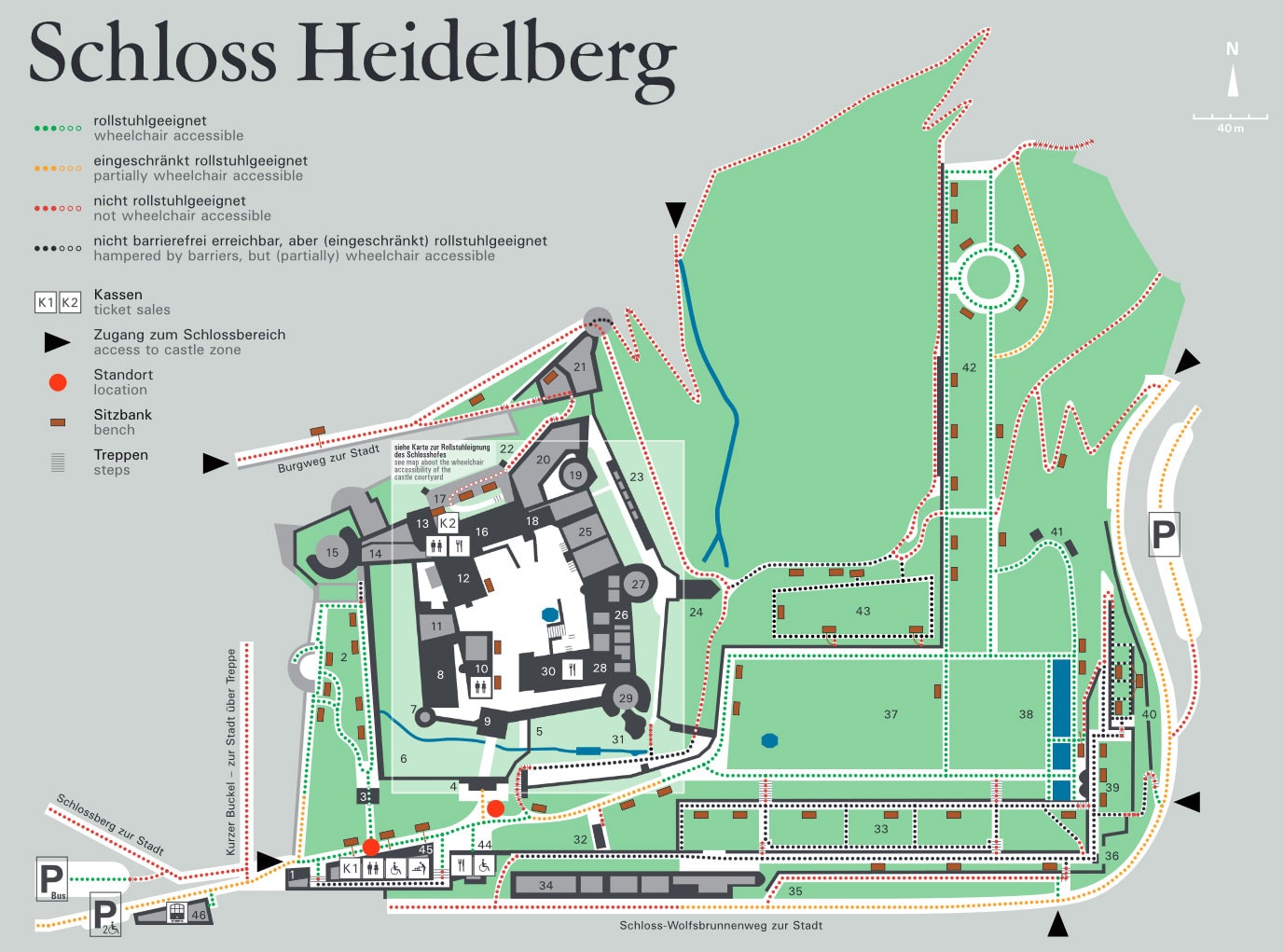 A map of the paths in Heidelberg Castle

From the foundation of the castle in the 13th century to the beginning of the 17th century, there was hardly any space for a beautiful castle garden due to the mighty fortifications with ramparts, towers and casemates. Only Elector Frederick V had a representative castle garden built between 1616 and 1619 with the “Hortus Palatinus”. Overall, the garden is relatively unspectacular from our point of view, but it offers a magnificent view of the east façade of the castle and from the Scheffel terrace to the entire old town, the Old Bridge and the Neckar.

If you only want to look at the outdoor facilities and the castle park, you do not have to pay an entrance fee.

The exterior view of the castle

Even if Heidelberg Castle is only a ruin today, the remains of the castle are still very impressive. And the nice thing is that you don’t have to pay an entrance fee to visit the castle from the outside. The access to the outdoor facilities and the castle garden is free and you have the opportunity to take pictures of the mighty ruin from 3 sides. From the outside you can also see the various towers of the castle, such as the Thick Tower, the Prison Tower, the Gate Tower, the Bell Tower, the Herb Tower or the Apothecary Tower.

One of the most beautiful views is from the Stückgarten on the west side of the castle. Around 1525, Louis V had a mighty rampart artificially built and walled here in order to place cannons to defend the residence. These were also called “pieces”. This wall is now prepared as a terrace and offers a magnificent view far into the Rhine valley.

A popular photo motif is the Elisabethentor,a princely birthday present from the 17th century. In the stone foliage hide numerous animals such as frogs, lizards and squirrels. Directly opposite the Elisabethentor is the visitor center.

The castle from the inside

It is also worth taking a look inside the castle ruins. The opening hours are daily from 9 am to 5 pm, the entrance fee for adults is 9 EUR. If you want to learn more about the history, you can also take part in special guided tours such as the “Highlights of the Castle History” or “Life at Court”.

The path to the former forecourt of the castle leads over a stone bridge over a partly filled ditch. From there you reach the spacious courtyard of the castle with the Frauenzimmerbau, Friedrichsbau, Gläsernen Saalbau and Ottheinrichsbau.

A popular photo motif in the castle is the large barrel. For the Heidelberg Castle, a total of four large barrels have survived, of which, however, only the fourth and largest remains today. The barrel was completed in 1751 under Elector Karl Theodor and had a capacity of 221,726 liters. 90 oaks were needed for the construction. Today, however, only 219,000 liters go into the barrel, because the wood has dried up and the volume has decreased accordingly. The last “Great Heidelberg Barrel” was also filled only three times, because it has a crucial flaw: it was constantly leaking 😉

Another attraction at Heidelberg Castle is the German Pharmacy Museum which shows the history of pharmacy. It has extensive collections, the exhibits of which cover the entire German-speaking world from antiquity to the 21st century, such as pharmacy facilities, herb chambers, a collection of medicines, a laboratory and milestones in drug development.

The historic old town of Heidelberg

The historic old town of Heidelberg stretches for almost 2 kilometers on the left, southern bank of the Neckar. The old town is characterized by a medieval city plan with narrow streets and baroque old buildings and by the castle enthroned above the old town.

In the old town is the founding seat of the university “Ruperto Carola”, founded in 1386, the oldest university in Germany. From the central shopping street (main street), you can easily explore the individual sights of the old town such as the Heiliggeistkirche, the Jesuitenkirche, the Kornmarkt, the Universitätsplatz, the Marstall & Heuscheuer and the Karlstor. Since everything is quite compact, you should plan 1 to 2 hours of time for a tour.

One of the most beautiful buildings in Heidelberg is certainly the “Hotel zum Ritter”. The oldest town house in the old town with its Renaissance façade decorated with ornaments was built in 1592, the last 350 years it served as an inn.

The Karl Theodor Bridge, better known as the Old Bridge, was built by elector Karl Theodor in the 18th century and connects the old town with the opposite bank of the Neckar in the district of Neuenheim. The bridge with its nine barrel vaults consists of Neckar valley sandstone, has a length of 200 meters and an average width of 7 meters. On the old town side, the medieval bridge gate with its 28-meter-high twin towers (Stadttor Heidelberg) is preserved as part of the former city wall.

Here you will also find the statue of the bridge monkey, a popular photo motif of Heidelberg. As early as the 15th century, a bridge monkey is mentioned at the Old Bridge. Today’s bronze sculpture was erected in 1979. Legend has it that if the visitor swipes over the mirror, it brings prosperity. If you stroke the outstretched fingers of your right hand, you will come back to Heidelberg.

The most beautiful city views of Heidelberg can also be found on the Philosopher’s Path which leads along the northern bank of the Neckar on the southern slope of the Heiligenberg. From the philosopher’s garden you have a fantastic view of the Neckar, the old town, the Heidelberg Castle and the Königsstuhl. The philosopher’s path is best reached via the Snake Trail, which begins at the northern end of the Old Bridge. But this is quite steep and has several stairs, so this is not suitable for strollers. Another access, which is also suitable for strollers, is located at the western end of the Philosophenweg on Bergstraße in the district of Neuenheim.

The southern slope of the Heiligenberg is one of the sunniest and warmest places in Germany. Therefore, exotic plants from the Mediterranean and from all over the world thrive here (e.B Spanish broom, Portuguese church, almonds, figs, lemon trees and pomegranate)

A classic 4-kilometer tour through Heidelberg (see the route in Google Maps) connects the Old Bridge with the Schlangenweg, the Philosophenweg, further over the Theodor-Heuss-Brücke back to the old town. This offers many beautiful views and photo spots on the romantic city panorama of Heidelberg.

Handschuhsheim Castle, also known as Tiefburg, is a ruined medieval ruin in the Heidelberg district of Handschuhsheim. From the core of the medieval moated castle, foundation walls, the moat, the vaults of the residential tower and the defensive walls are still preserved. 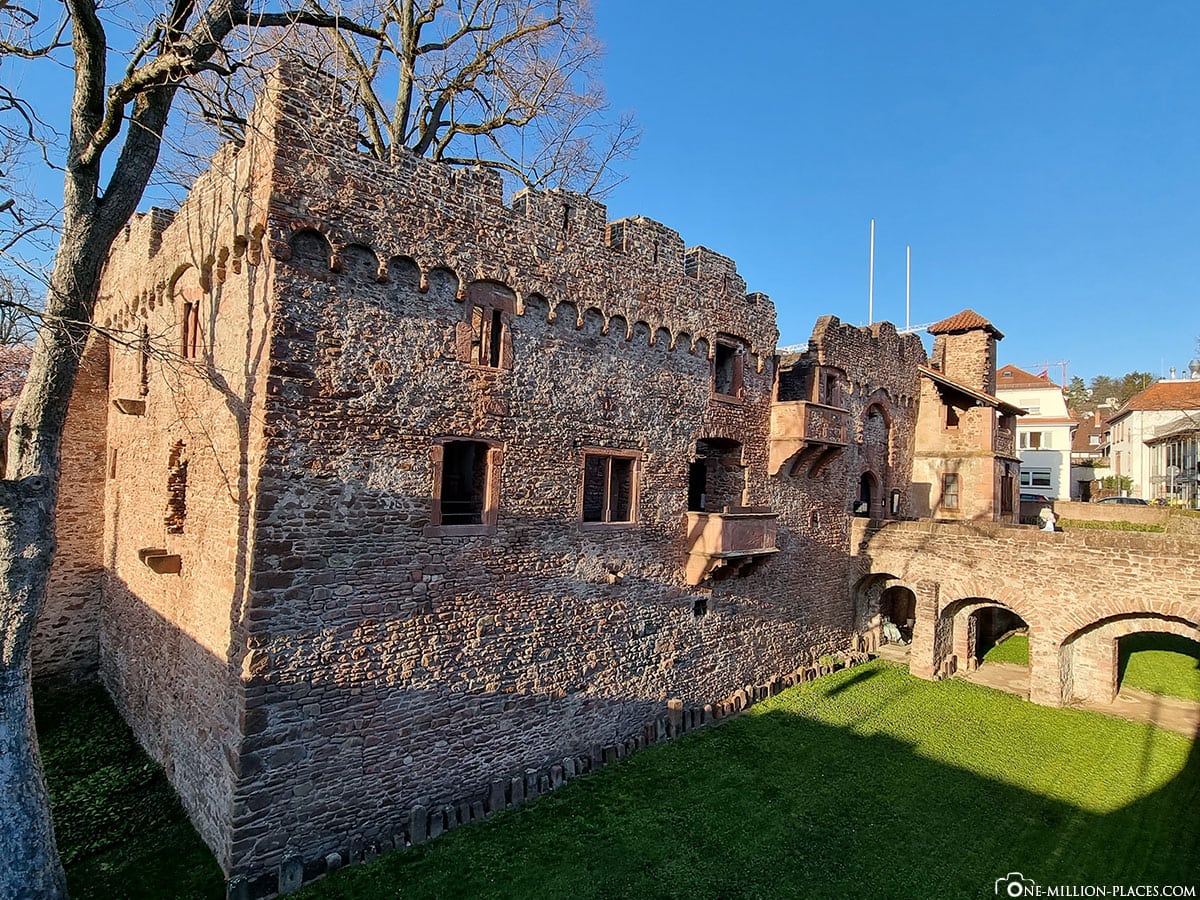 On the north bank of the Neckar is the 440-meter-high Heiligenberg next to the Königstuhl one of the two local mountains of Heidelberg. From here you have a great panoramic view of Heidelberg and at the same time you can explore some historic buildings such as the monastery ruins of St. Stephan and St. Michael as well as the Thingstätte.

Other attractions in Heidelberg

There are many more sights, photo spots and attractions in Heidelberg:

– the University of Heidelberg and the Botanical Garden
– the Königstuhl (Viewpoint, Fairytale Paradise, Klingenteich Waterfall)
– Sky ladder up to the Königstuhl
– the Karlstor
– the Kurpfälzische Museum
– the Benedictine Abbey of Neuburg Abbey
– the Carl Bosch Museum Heidelberg
– Heidelberg Zoo

A map with all sights in Heidelberg

On the following Google MyMaps map we have drawn all important sights of Heidelberg. If an important point is missing, please let us know in the comments below, then we will be happy to add the map 🙂

A map with all sights in Heidelberg