After our visit to Rothenburg ob der Tauber we paid a visit to the small town of Schwäbisch Hall which is only about 65 kilometres away in Baden-Württemberg. Until now, we only knew the city from pictures on Instagram and from the well-known advertisement of the building society of the same name (“You can build on these stones…”) and were very curious to see which attractions were waiting for us here.

Things to know about Schwäbisch Hall

Schwäbisch Hall is a town in Baden-Württemberg with about 40,000 inhabitants, which lies 60 km northeast of Stuttgart and about 37 km east of Heilbronn. It is an old salt boiling town and lies on an old salt spring in the ruggedvalley valley of the Kocher. Over the years, Schwäbisch Hall developed into a Royal City of Stauf, and in 1280 it achieved the status of an imperial city in the Holy Roman Empire.

Model & Map of the City of Swabian Hall

We parked our car in a paid parking lot at the kocher (P7 Im Hall) and explored the city from here. By the way, this was our first city trip for three 🙂 Our constant companion on our excursions is our pram MIXX next from the brand Nuna, with which we are super happy ❤ 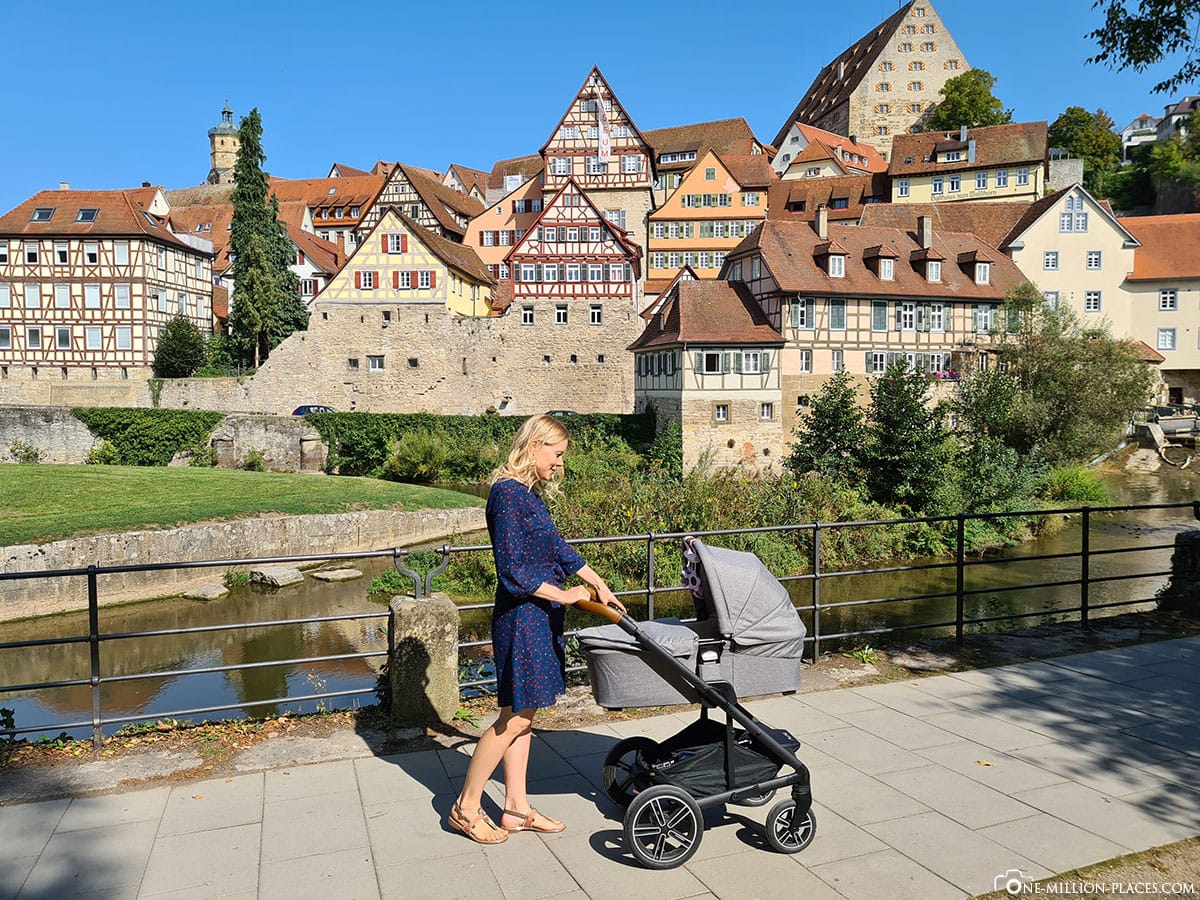 City trip to Schwäbisch Hall with stroller from NUNA

The cityscene of Schwäbisch Hall

The most beautiful view of the impressive city scenery of Schwäbisch Hall is from the two Kocher Islands Grasbödele and Unterwöhrd. We had really nice weather and couldn’t stop taking photos – we liked so much this sight of the old half-timbered houses, which were reflected in the water of the cookers. 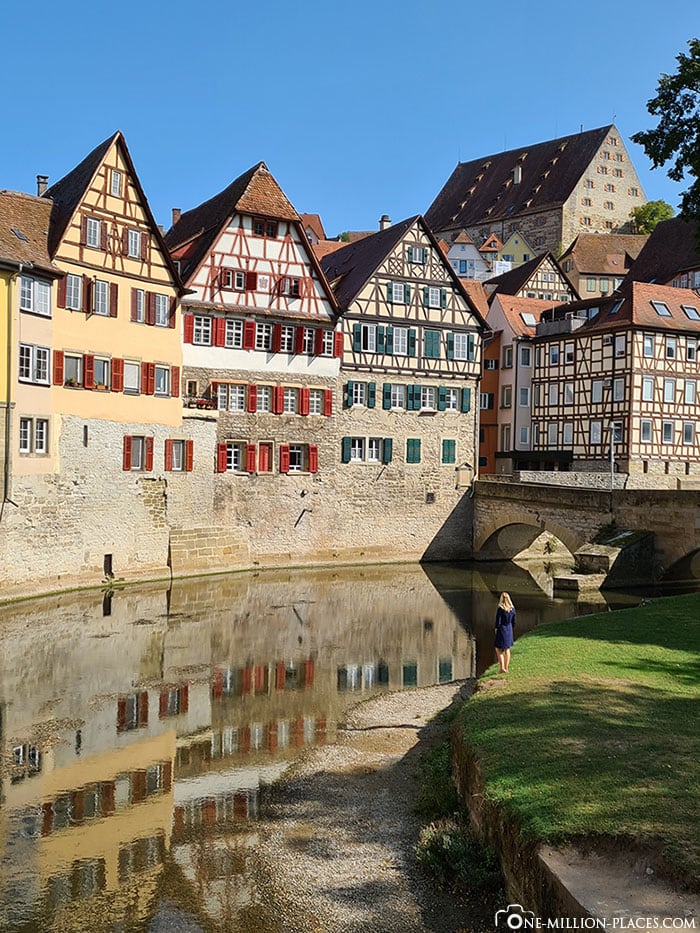 From the Kocher Islands you can reach the market square of Schwäbisch Hall via the Steinerne Steg and Haalstraße, which is framed by very beautiful half-timbered, Renaissance and Baroque buildings. The baroque town hall was built in 1735 after a fire on the former site of the church of St. Jacob. Towards the end of the Second World War, the town hall burned to the ground, but was reconstructed as faithfully as possible. Directly opposite is the Romanesque-Gothic parish church of St. Michael, consecrated in 1156, with its 70-metre-wide, 53-stage staircase. For almost 100 years, it has been transformed into an open-air stage in the summer months.

The Old Town & the Pedestrian Street

After looking at the historic market square, we strolled through the streets and alleys of the old town, which are mostly a pedestrian zone. In addition to beautiful half-timbered houses, there are also countless shops, restaurants and cafés.

A walk along the river Kocher

We finished our city tour with a relaxed walk at the river Kocher. From the Executioner’s Bridge you have a beautiful view of the river and the (half-timbered) houses in Mauerstraße.

On the way home we made a short photo stop at the monastery Großcomburg, which can be reached within 30 minutes on foot from the old town of Schwäbisch Hall. Großcomburg is a former church and monastery complex of the Benedictines from the 11th century. Unfortunately, we did not have time to visit the monastery area. However, we were able to take some beautiful photos from a distance of the impressive castle-like complex, which is perched high above the Kochertal on a ridge. The outdoor facilities of the monastery area and the 420-metre-long covered defensive passage with its towers and roundels are open daily and can be walked free of charge. 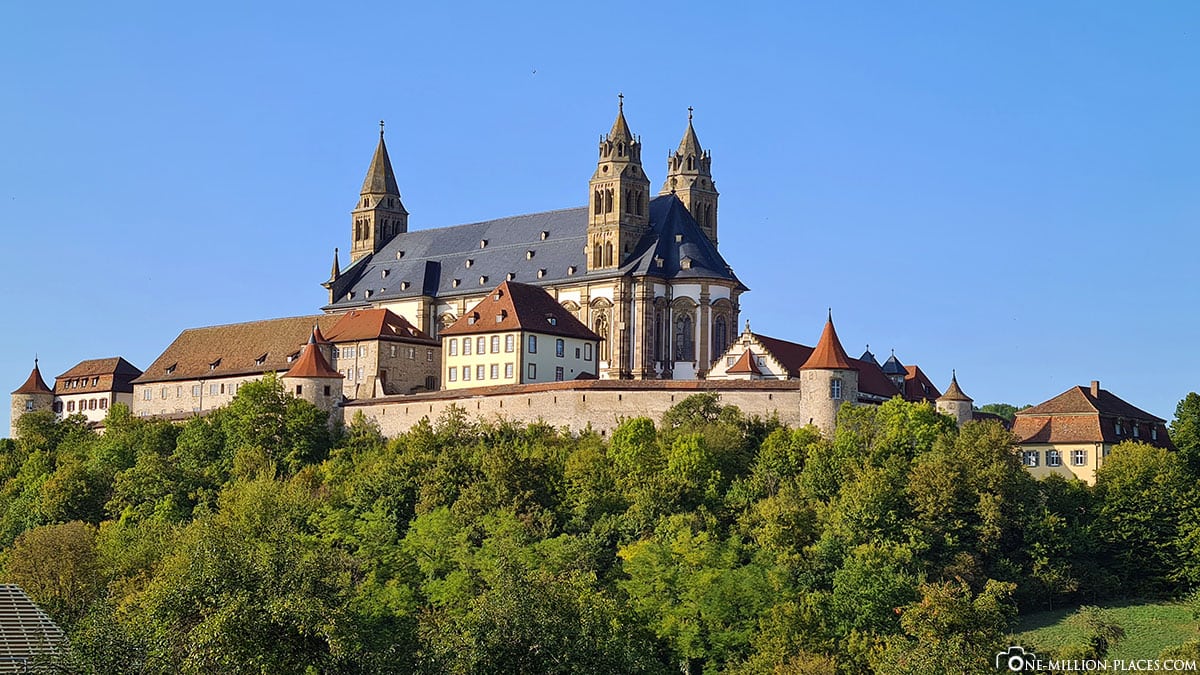 We took about three hours for our city tour. If you want to sit down and have a bite to eat, you should plan a little more time for visiting the city.