After the Corona pandemic meant that it was not possible to travel in Germany for two months, we took the opportunity to visit the beautiful cultural city of Weimar after the first relaxations. What you can discover in the Thuringian city, we show you in our blog post.

The City of Weimar – a UNESCO World Heritage Site

Weimar is a quiet small town on the Ilm with about 65,000 inhabitants. She gained worldwide fame through its former prominent inhabitants such as Goethe, Schiller, Bach, Liszt and Gropius – all of them remained for several years or decades in the small provincial town, which thus developed into the center of German and European cultural history. In addition, the city attracts visitors with winding alleys, inviting squares, spacious parkland sheep as well as museums and castles.

Weimar has an important place in the register of UNESCO World Heritage Sites, because in the course of the last few years several sites or documents have been declared world heritage:

In 1996, the Bauhaus and its sites in Weimar (and Dessau) were added to the list
In 1998, the ensemble “Classical Weimar” became a UNESCO World Heritage Site due to the “great art-historical significance of public and private buildings and park landscapes from the heyday of classical Weimar” and the “outstanding role of Weimar as a spiritual centre in the late 18th and early 19th Century” declared (Source: UNESCO)
In 2001, Goethe’s estate, which was kept in the Goethe and Schiller Archives in Weimar, was accepted by UNESCO as a world documentary heritage
Since 2015, earlier writings of the Reformation, some of which are kept in the Duchess Anna Amalia Library in Weimar, have been part of the World Documentary Heritage

Travel Guide & Things to Do

Most of the sights in Weimar can be reached very easily on foot, as they are compact in the centre of the city. Only for a visit to Belvedere Castle and Buchenwald concentration camp you have to use public transport or a car.

Our first port of call of the day was the Duchess Anna Amalia Library at Democracy Square, which was founded in 1691 as the “Ducal Library”. On the occasion of the 300th anniversary in 1991, she received the name of the Duchess Anna Amalia of Saxe-Weimar-Eisenach to pay tribute to her services to the library and her love of books.

Since this was also the first day on which the library reopened after a corona-related closure for several weeks, there was therefore very little going on. Access was only possible with mouth-nose protection and adequate disinfection. After we paid our entrance fee of 8 EUR per person, we walked directly into the Rococo Hall – the highlight of the library. On the basis of the counted felt shoes, which stood at the entrance, one could deduce that a maximum of 10 people are allowed to enter the hall at the same time. Perfect to let the room take hold in peace and to be able to take beautiful photos.

The Rococo Hall is a rectangular hall in the middle of which an oval interior has been installed; twelve pillars with busts alternate here with bookshelves and passageways through which the light shines into the interior of the hall. The hall, which extends over two floors, is made of simple pine wood with ornaments and stucco elements on the ceiling. In the room, besides portraits of the princes, there are also the heads of poets, artists, researchers and philosophers. Anyone who thinks that the books in the hall are only for decoration is mistaken. The more than 40,000 books on display here in the Rococo Hall are genuine and can be ordered to the reading room for reading. By the way, around 800,000 books of the library are stored in a modern underground magazine under the square of democracy.

In 2004, the library suffered major losses due to a fire in the roof truss of the main building. About 28,000 books were saved from the building, but 50,000 volumes and 35 paintings were completely lost and about 62,000 volumes were severely damaged by fire and fire water. After intensive restoration work, the library was reopened in autumn 2007. A film about the elaborate restoration of the ash books can be watched here.

Within walking distance of the Anna Amalia Library is the Weimar City Palace, which had unfortunately closed at the time of our visit due to extensive renovation work. The city castle is the former residence of the dukes of Saxe-Weimar and Eisenach and is part of the UNESCO World Heritage Site “Classic Weimar”. The complex at the northern end of the Ilmpark emerged from a medieval water castle and was first mentioned in a document at the end of the 10th century. In a construction period of more than five hundred years, the current shape of the castle has developed. Today it houses the castle museum with a comprehensive art-historical exhibition on the theme of painting.

In the footsteps of Goethe and Schiller

The most prominent representatives of Weimar are certainly Johann Wolfgang von Goethe and Friedrich von Schiller. During our walk through the city, we came across these two names on almost every street corner – not surprisingly, because the city of Weimar is proud of its two former inhabitants. Today in Weimar you can visit the residence of Schiller and Goethe. Both buildings were added to the UNESCO World Heritage List in 1998 as part of the ensemble “Classical Weimar”.

The Schillerhaus is located at today’s Schillerstraße 12, the former “Esplanade”, where Schiller lived from 1802 until his death in 1805. His wife remained there with their four children. Today there is a museum in the house, which was originally dedicated to the life and work of Schiller. Today, special and temporary exhibitions of the Klassik Stiftung Weimar are presented in the three large exhibition rooms.

The Baroque-style residence of Goethe is located on the Frauenplan (front house). For almost 50 years Goethe lived in this building, which was rebuilt and designed according to his art ideals and diverse interests. Today there is a museum in the house, where you can see numerous original pieces as well as furniture from Goethe’s estate. Both poets are commemorated with a bronze double stand – the Goethe Schiller Monument – which was inaugurated in 1857 in front of the German National Theatre on Theaterplatz.

The Old Town of Weimar offers a very special flair with its cobbled, partly winding streets, historic buildings and the central market square. We took the time to stroll through the streets, which are mostly traffic-calmed, and let everything affect us. In the old town are most of Weimar’s sights, such as the market square with the town hall and the colourful Cranach House, the houses of Goethe and Schiller, the Wittumspalais and the Zeughof, the German National Theatre, the House of the Weimar Republic and Herderplatz with Herderkirche.

The town church of St. Peter and Paul (Herderkirche)

The late Gothic town church of St. Peter and Paul, also referred to by locals as Herderkirche, was built as a three-nave hall church between 1498 and 1500 and is considered to be the most important church building in the city. In 1807 the Duchess Anna Amalia, Duchess of Saxe-Weimar-Eisenach, was buried in front of the altar as the last regent at her own request. This was the last funeral in the town church. Since 1998, the church has been a UNESCO World Heritage Site as part of the ensemble “Classical Weimar”.

The Park on the Ilm

The 48-hectare park on the Ilm – Weimar’s green oasis – is a landscaped garden on the edge of Weimar’s Old Town. It was built between 1778 and 1828 with the participation of Johann Wolfgang von Goethe and is thus one of the best preserved parks of Classicism and Romanticism. The park belongs to the ensemble “Classical Weimar”, which was added to the UNESCO World Heritage List in 1998. Characteristic of the park are the numerous visual axes, the bridges over the Ilm arches, the versatile park architectures and the trees. The buildings worth seeing in the park on the Ilm are Goethe’s garden house, the Roman House and the Temple Lords House.

The Historical Cemetery with the Prince’s Tomb

The Historical Cemetery in Weimar, opened in 1818, contains the tombs of numerous well-known personalities. The extensive complex is located on a hill in the southwest of the city. Together with the Prince’s Tomb, the Historical Cemetery was declared a World Heritage Site by UNESCO in 1998 as part of the ensemble “Classical Weimar”.

Worth seeing is the Weimar Prince’s Tomb, which served exclusively as the tomb of the Grand Ducal House of Saxe-Weimar-Eisenach. The exception was the two coffins of Johann Wolfgang von Goethe and Friedrich Schiller, which can also be seen here. Interestingly, Schiller’s coffin is empty after a genetic test in 2008 revealed that Schiller’s bones were not in the coffin. On the back wall of the Prince’s Tomb, a Russian Orthodox chapel was later built as a burial chapel, which are connected underground.

Entrance to the cemetery is free, only for the Prince’s Tomb an entrance fee of 4.50 EUR per person is due.

South of Weimar , about 4 km from the old town – lies on a wooded hill and in the middle of a large park the Belvedere Palace, the baroque summer residence of the family of Saxe-Weimar and Eisenach. Originally used as a hunting lodge, Belvedere Castle was built between 1724 and 1748 in the type of a pleasure castle with pavilions, clock and cavalier houses including an orangery as well as a pleasure and maze. Since 1923, the castle has housed a museum of 18th-century handicrafts. Today, most of the cavaliers’ houses are used by the “Franz Liszt” School of Music as practice and learning rooms.

The castle complex with the 43 ha castle park was declared a World Heritage Site by UNESCO in 1998 as part of the ensemble “Classical Weimar”.

In 1919, Walter Gropius founded the (State) Bauhaus in Weimar, an experimental art school for design that represented a combination of art and craftsmanship. Today, the Bauhaus is regarded worldwide as the home of the avant-garde of classical modernism in all fields of free and applied art and architecture. On the occasion of the 100th anniversary of the Bauhaus, the new Bauhaus Museum Weimar opened in 2019 and since then has presented the world’s oldest Bauhaus collection. 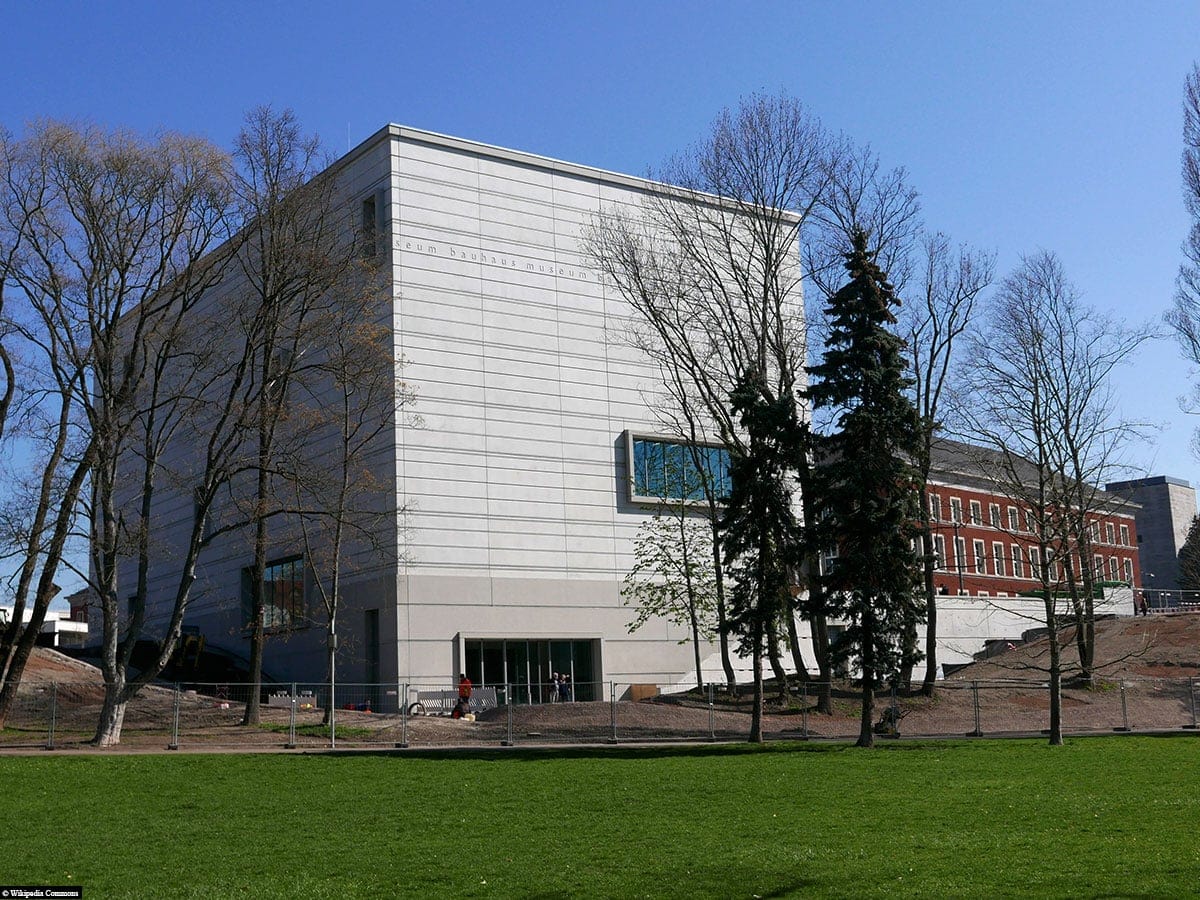 The memorial of the Buchenwald concentration camp

About 9 km from the old town of Weimar is the former concentration camp Buchenwaldon the Ettersberg, which the SS operated here from July 1937 to April 1945. During this period, more than 260,000 people from more than 50 nations were imprisoned in the Buchenwald concentration camp. 56,000 of them were murdered by the SS or died through exhaustion, hunger, torture and medical experiments. In the years that followed, the Soviet occupying forces used the site as an internment camp until 1950, detaining 28,000 people; a quarter of them died.

Today you can visit historic buildings, relics from the camp period, memorabilia and a permanent exhibition on the history of the concentration camp.

A map with all Tourist Attractions in Weimar

On the following Google MyMaps map we have drawn the most famous Tourist Attractions and memorials of Weimar.