In the morning we visited the Charles Darwin Research Center on the island of Santa Cruz with our guide Sandro, which is located on the outskirts of the city of Puerto Ayora. In the afternoon our journey to the Galapagos Islands then continued to the island of Isabella.

Day
54
of our trip around the world

The Charles Darwin Center was opened in 1964 and provides information about the breeding program of the Galapagos giant tortoises. In Charles Darwin Center you can see a lot of small turtles (from 1 month) as well as many older ones. The turtle named “Lonesome George” had also been home here since 1972, which was probably the only survivor of its kind, but unfortunately died in 2012 in the research station.

For decades Charles Darwin Center has worked on conservation, restoration and sustainable development projects to ensure that the archipelago is well-managed. More than a hundred scientists, educators, research assistants, support staff and volunteers from all over the world have participated in this effort. Currently, the organization’s staff from Charles Darwin Center is composed by more than 75% Ecuadorians and is committed with the professional training of the permanent residents of Galapagos.

Charles Darwin Center is a nonprofit organization and the work we carry out depends entirely upon our donors. Additionally, the Charles Darwin Foundation has just renewed its agreement with the Government of Ecuador in July 2016 for 25 more years of science in the archipelago.

If, like us, you’ve seen the many Galapagos turtles in the Highlands of Santa Cruz or Floreana, it’s not really worth visiting the Charles Darwin Center. Especially since the animals here are locked in their very dry-looking enclosures and partly walls or fences obscure the view. The little turtles are still very cute. And there are also a few land iguanas to see.

By ferry from Santa Cruz to Isabella

After lunch, at 2 p.m., our ferry boat went to the neighbouring island of Isabela, where we will spend the next two nights. Luckily, thanks to our anautin seasickness miracle pills, we survived the trip safely without any incidents 🙂

The journey with ferries, small boats or even cruise ships can get quite rough from time to time. If you are not used to the movements, high swell can easily lead to seasickness. Until now, we as divers rarely had problems with it, but on the crossings between the Galapagos Islands it also caught us quite.

Our tip: In order not to become seasick, it is advisable to get a few tablets against seasickness beforehand! This can be found in every pharmacy on Galapagos (10 pieces = $1) or in advance already here at home e.g. from Ratiopharm or Aliud. After our horror trip we got “anautin” tablets with the active substance “dimenhydrinate” from our guide in Santa Cruz… and the little things help really amazingly well! We still take these tablets today with every trip on the water, where it can get a little more violent. And since then we have never again become seasick 🙂 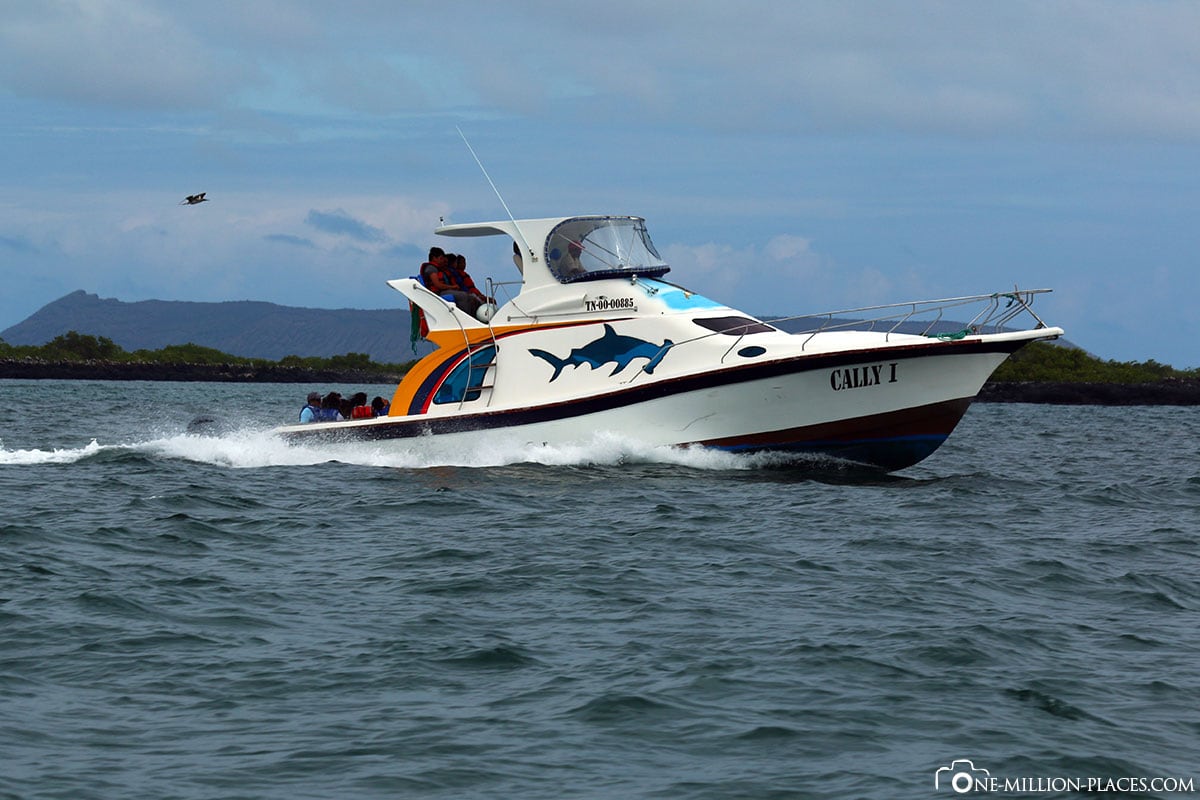 The ferry from Santa Cruz to Isabella

Arriving in Isabela, each passenger had to pay USD 5 island tax.

The island of Isabella

Isabela is the largest island in the Galapagos archipelago and occupies well over half of the land area of the entire archipelago. The island grew from up to 6 originally separate volcanic islands due to outflowing lava. 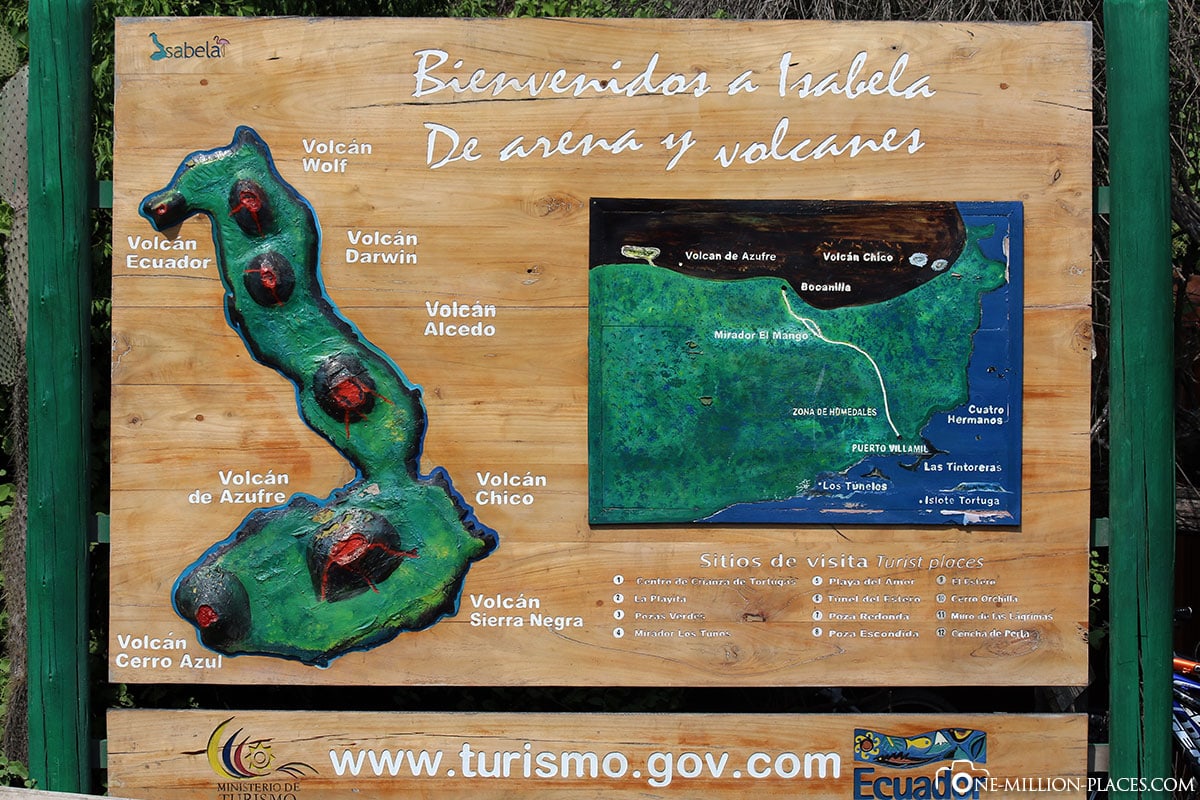 A map of Isabella Island

Our accommodation in Puerto Villamil

We were picked up by a guide at the port of Puerto Villamil and taken to our Hotel Volcano.

The property is located directly on the main road that leads through the village of Puerto Villamil. The nearby restaurants are just a few metres’ walk away. When we arrived at the hotel, we had to wait a little before a member of staff came. We got a room with two separate beds (and sea view). It smelled very musty in the room. Airing didn’t help much either. Directly diagonally opposite there is a trendy beach bar, so that it was sometimes very noisy in the evening/night. The bathroom was expedient, but unfortunately not the cleanest. Breakfast was not offered at the time. At the reception there was free water from a dispenser 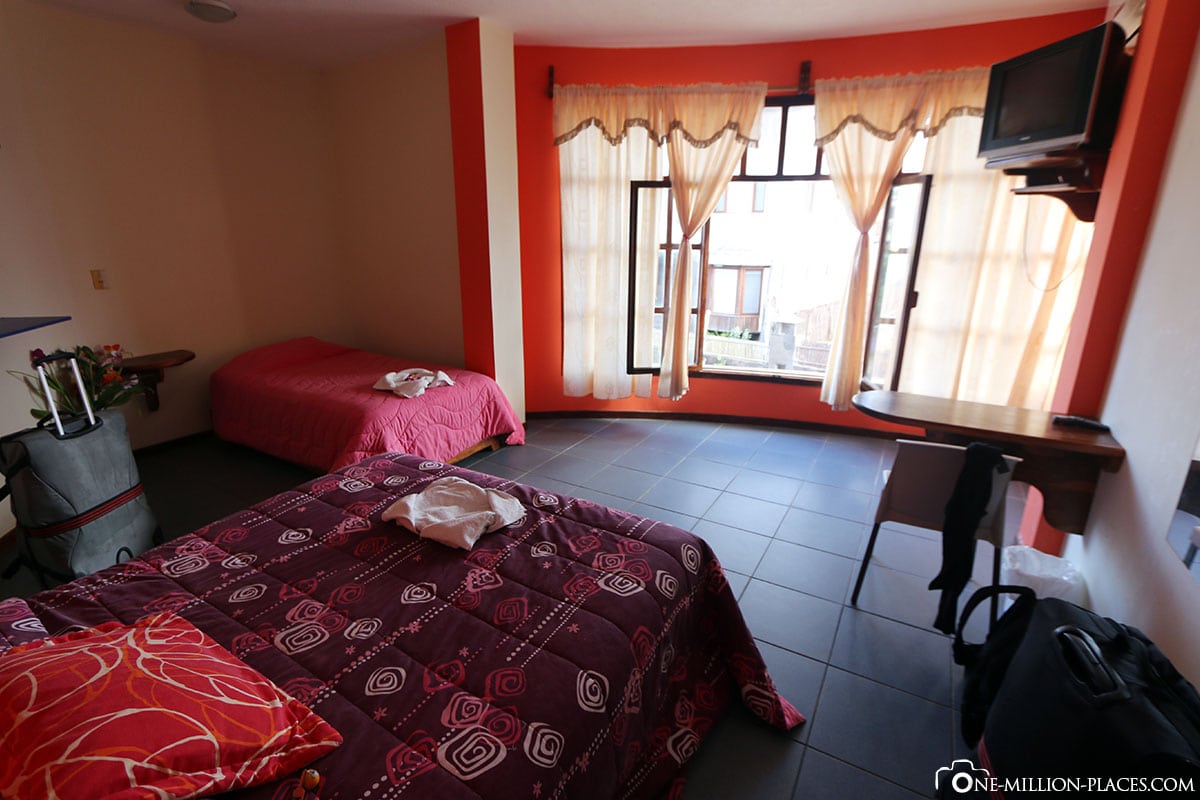 Our room at Hotel Vulcano

The Flamingo Lagoon in Puerto Villamil

After a short break of 15 minutes we were picked up again. The program today included a short visit to the Galapagos Turtle Breeding Station and a small flamingo lagoon.

Around 7 p.m. we had a bite to eat in a restaurant and went to bed early, because tomorrow we have to visit the Sierra Negra volcano and the alarm clock rings early.