After a good 10 hours of flying from Dubai with an Airbus A380 from Emirates, we arrived in Perth in Western Australia in the early evening. Greater Perth is home to about 2 million people and the nearest major city, Adelaide, is more than 2000 kilometres away.

Our travel plans for Western Australia

We explored large parts of Australia last year during our world tour (Sydney, Brisbane, Melbourne, Cairns, Great Ocean Road, Ayers Rock, Airlie Beach, Whitsunday Island & a diving cruise on the Great Barrier Reef). We liked Australia so much that we would now like to get to know the western part of this huge continent. For better planning of the individual stations and what to see there, we have made the following overview of the sights of Western Australia: 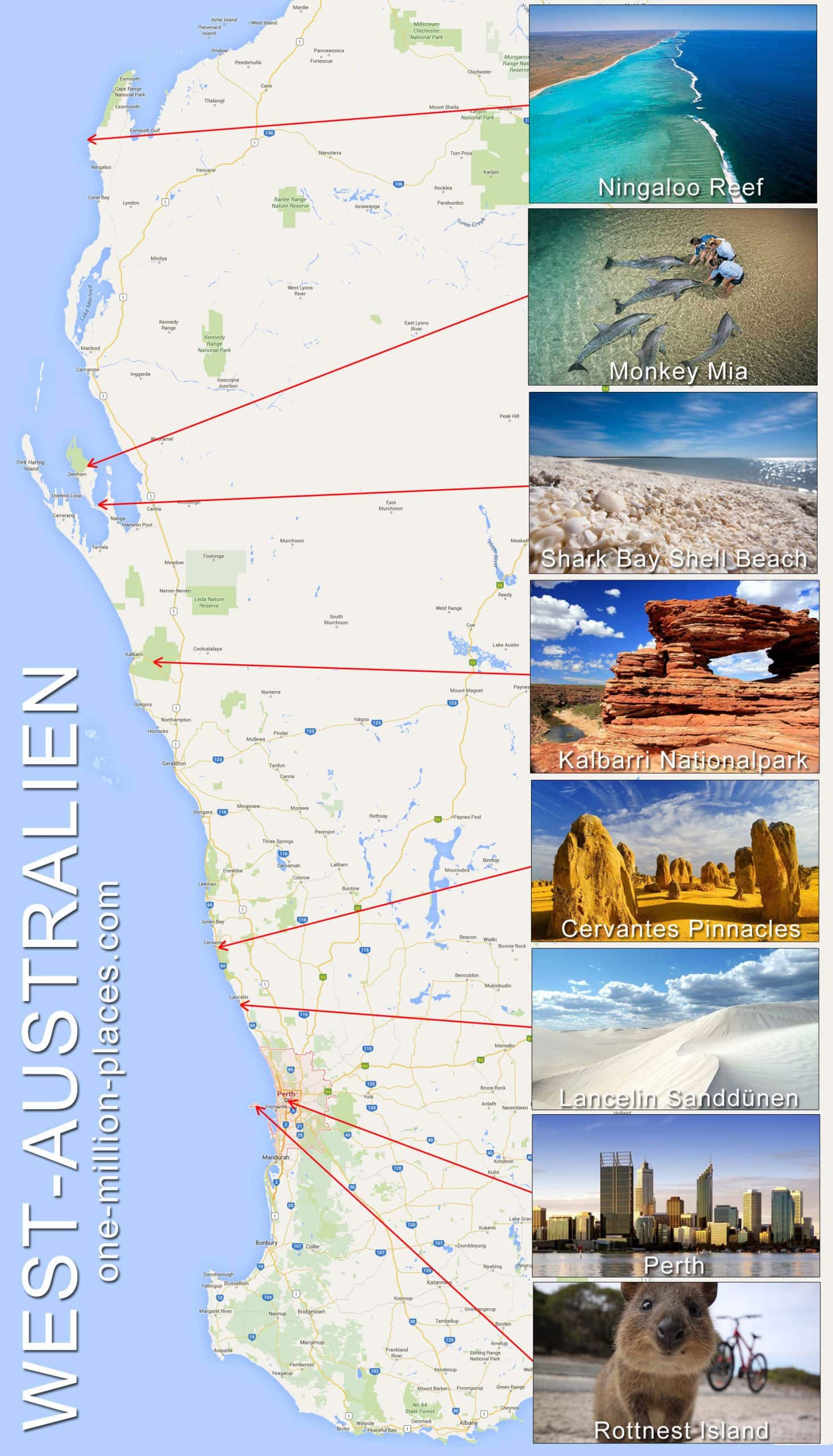 What to see in Western Australia

From Perth Airport by bus to the city centre

The airport in Perth itself is relatively clear, not too large and consists of an international terminal (T1 & T2) and a national terminal (T3 & T4). These terminals are not located next to each other, but are connected by a free shuttle bus. From the international terminal you can easily get to the centre of Perth within 30 minutes by bus 380 (see map) – and with 4.50 AUD (just under 3 euros) this is also a really fair price to other metropolises.

For the next three nights we have chosen the Comfort Hotel Perth City, because on the one hand the location is very good (walking distance to the center), there are free hotel parking and the reviews on the internet were quite good.

Since we were relatively tired of the long flight and the time difference today, we only went shopping for a short time and then went to sleep. But the following day was all about the city exploration of Perth.

What to see in Perth

The following map of the most important sights of Perth we have worked together in advance: 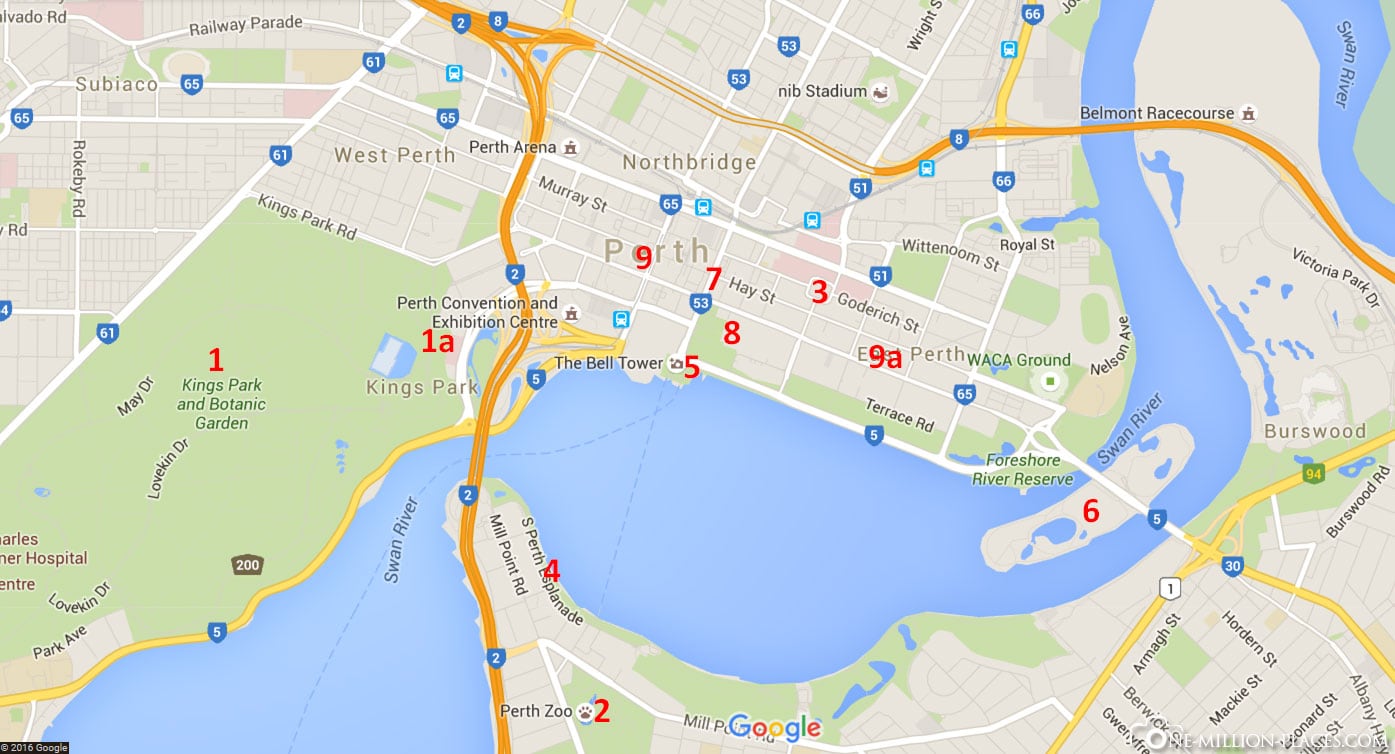 A map of perth’s attractions

The Kangaroos on Heirisson Island

The first port of ours today was Heirisson Island – an island located in the middle of the Swan River, the southern part of which can also be called Kangaroo Island. Because here live – in the middle of Perth – 6 or 7 kangaroos. From the rest of the island, the area is separated by a fence so that the kangaroos can not run onto the street. For quite a while we walked through the enclosure and couldn’t find a kangaroo. Since it was already really warm, we feared that the kangaroos hid under the bushes to protect themselves from the sun. But then we discovered one in the grass. We moved very carefully towards the kangaroo. But we didn’t have to be so careful. The kangaroos in Heirisson Island Park are completely used to contact with humans, so that at some point it came to us. At some point, a second kangaroo came to us. We certainly spent an hour on the site. It was a great start to the day and completely free of charge.

From Heirisson Island we walked along the Swan River and Langley Park towards the city. ‘The trail ends at Barrack Square with Bell Tower,which is said to be one of the city’s most important landmarks. In the tower hang 18 historical bells,which are rung every day at noon by real bells. Around the middle of the 82-metre-high tower is a small observation deck, which is expected to offer a “spectacular” view of Perth and the surrounding area at 40 metres. The entrance fee of 14 AUD seemed a bit hefty for us, so we continued towards the city centre. Here we passed the Supreme Court, Government House, St. George’s Cathedral and Town Hall. Since it was just noon, in the sunny weather many people sat in the parks and had a picnic. This fit quite well into the picture that we have of the city: everything is relaxed and quiet, hustle and bustle seems to be a foreign word here and all people are insanely friendly and open.

Directly in the city center there are two parallel pedestrian areas, which are here called “malls“. Small boutiques line up next to larger department stores and are often worth a look into the side streets, such as the London Court. The London Court is a small open shopping arcade with historic facades, archways and small statues. The small cafés and shops create a great, cosy atmosphere. Our last sightseeing stop today was St. Mary’s Cathedral.

Even though a lot of things are expensive in Australia (e.g. food), there is also something positive to report: In the inner city of Perth there is a free bus system. With the so-called CAT’s (Central Area Transit) you can travel free of charge on four different lines. We already know this from Melbourne and find it great 🙂