With the flight from Hawaii to Australia begins for us the 2nd half of our 6 month world trip. The Australian continent is the 4th continent of our trip to Europe, North America and South America and we are looking forward and now very much to the country “Down Under”, to New Zealand and to explore the dreamlike South Seas.

Our flight from Hawaii to Australia

With a Boeing 787 Dreamliner from Jetstar we took off in Honolulu on time at 8.15 am (Thursday). After a 10-hour flight we landed in Sydney at 3.35pm (Friday). Strange to cross the date line and suddenly have “lost” a whole day 🙂 Entry into Australia was very quick. We had already taken care of our visa online in advance, which was super easy and cost nothing.

In front of the terminal at Sydney Airport we were approached by a bus company offering shuttles to the city. Since the price was cheaper than the airport city train (which we actually wanted to take), we chose the bus. 45 minutes later we were dropped off in front of our Hotel Y Hotel Hyde Park (now Song Hotel Sydney), which we booked for four nights.

We had decided on a private room with private bathroom. The room was small, but everything was available: fridge, TV, hair dryer etc. Bathroom and rooms were clean. Shampoo, soap and conditioner are provided. WIFI is not free. We bought a 3-day package, which cost AUD 12, but access is for one device only. There is a supermarket (“Coles”) within walking distance in a shopping centre. Buses to the port and Bondi Beach leave almost at the door. Breakfast was a bit sparse: toast (with jam, butter, vegemite) and cereals. But you can upgrade it for 7 AUD – then you also get hot things (sausages etc.). We were satisfied with our stay and can recommend the hotel. 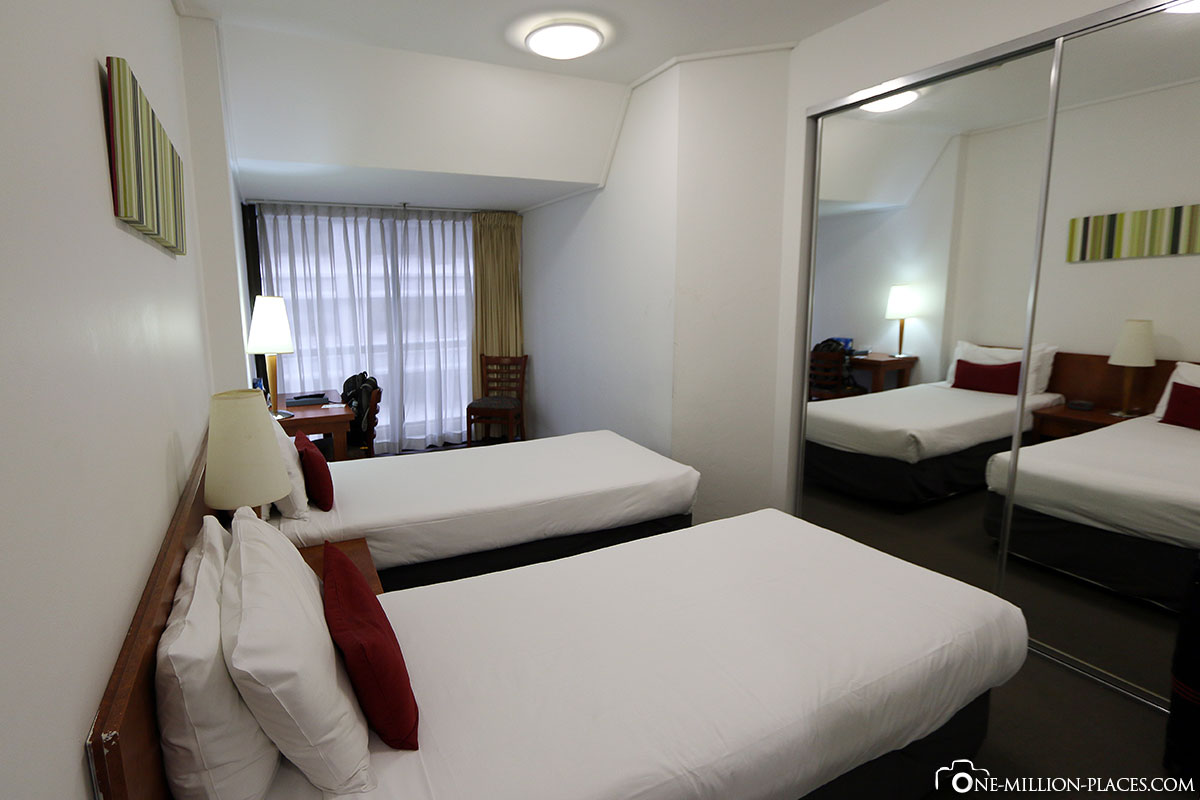 Sydney is located on the coast of the Pacific Ocean in the southeast of the Australian continent and is the largest city in Australiawith 5 million inhabitants. At the end of the 18th century, the navigator James Cook discovered a bay, which he named after Lord Sydney, an important politician in Britain at the time. Sydney was founded on January 26, 1788 and is now the industrial, commercial and financial centre of Australia. The city’s main attractions include the Opera House, the Harbour Bridge, St Mary’s Cathedral, Fort Denison, Taronga Zoo, Cadman’s Cottage, Sydney Tower, Bondie Beach, Botanical Garden and the districts of The Rocks, Kings Cross, Circular Quay and Darling Harbour. The city is considered one of the most expensive cities in the world – but also a city with the highest quality of life in the world.

The sights of Sydney

In bright sunshine and blue skies, we set out on foot to explore Sydney. Our hotel is quite centrally located, so that we could quickly reach the main sights from here.

Hyde Park is the oldest public park in Australia. With an area of 16 hectares, it is significantly smaller than its namesake, London’s Hyde Park. The park has a rectangular shape and is located in a central business district of Sydney. Hyde Park contains some gardens with plant species, such as the Chinese fig or palm plants. The heart of Hyde Park, however, is the Archibald Fountain.

The Royal Botanic Gardens in Sydney is the largest of three botanical gardens in the city, with an area of 30 hectares. The garden is open daily and admission is free.
The botanical garden was founded here in 1816, it was part of the governor’s garden. With the first botanist to successfully grow nearly 3,000 plants from Great Britain, a long history of collecting and studying the plants began in 1817. This makes Sydney’s botanical garden the oldest scientific institution in Australia and has played an important role in the settlement of plants from other regions. From the northern tip of the Royal Botanic Gardens we had a great view of the skyline, the famous Opera House and the Harbour Bridge, the two main attractions of Sydney.

The Sydney Opera House is one of the most striking and famous buildings of the 20th century and THE landmark of Sydney. It was opened in 1973, 14 years after construction began. Since 2007, the Sydney Opera House has been a UNESCO World Heritage Site and is one of the world’s largest cultural centres with 2,500 performances and around 4 million visitors a year. The dimensions of the Opera House are gigantic: the 184-metre-long and 118-metre-wide building houses five theatres with a total of 5,541 seats. There are also five rehearsal studios, a cinema, 60 changing rooms, four restaurants, six bars and numerous souvenir shops.

We walked over Circular Quay with its many ferry docks into the “The Rocks” area. The Rocks is an old neighbourhood with historic alleys, in the shadow of the Harbour Bridge, dating back to the founding of Sydney in 1788. The winding alleys, old warehouses, the proximity to the harbour, the market drive and the old sandstone houses make the district worth seeing and a magnet for locals and tourists. In a prime location you will also find a small piece of Germany – a Löwenbräuhaus. And after almost 3 months on a world tour, a German bratwurst tastes really delicious 🙂

From the district “The Rocks” we walked over a pedestrian access to the Harbour Bridge. The Sydney Harbour Bridge was inaugurated in March 1932 and is the main link between Sydney’s north and south coasts via the Port of Sydney (Port Jackson). The bridge is often called “coat hanger” (german: hanger) by locals, in reference to its external appearance. The sydney Harbour Bridge span is 503 metres. With its width of 50 meters, it is the “widest bridge in the world with a long span” and contains a total of eight lanes, two railway tracks, a bicycle path and a footpath.

If you need an adrenaline rush, you can climb the bridge arches as part of the so-called “Bridge Climb” since 1998. However, the pleasure is not quite cheap and costs from 170 EUR – for this you get a spectacular view of Sydney and the harbour. Since 1993, the Harbour Bridge has been the centre of New Year’s Eve celebrations in Sydney Harbour. Every year, a gigantic fireworks display is fired from the bridge and the bridge is beautifully illuminated. From the bridge we had a great view of the harbour, the Sydney skyline and of course the opera.

On the same side to the left of the Harbour Bridge there is Luna Park , a small amusement park, which opened in 1935and we paid a short visit to. At the park entrance, one is greeted by a laughing face about nine metres high, which is framed by two 36-metre-high towers. The main attraction in the park is the “Wild Mouse” roller coaster. There are also numerous carousels, a Ferris wheel overlooking Sydney and the Coney Island Funhouse with giant slides.

Darling Harbour is a large recreation and entertainment district in Sydney on both sides of Cockle Bay with hotels, restaurants, shopping centres, theatres and museums, which is largely designated as a pedestrian area. Here you will find the Sea Life Aquarium, the Wild Life Zoo, the waxwork cabinet Madame Tussauds, an IMAX cinema with the largest screen in the world, the Australian Naval Museum and also a large shopping center.

As it started to rain a short time later, we visited the Wild Life Sydney Zoo, which is also located in the Darling Harbour district. In addition to a butterfly house and a giant crocodile, we have seen some Australian animals: the Tasmanian devil, wallabies and kangaroos, a quokka and koalas.
The koala was very fond of us and we are already looking forward to it when we can hold one on our arm. This is prohibited in the state of New South Wales, where Sydney is located. Therefore, you can take a photo with a koala here at the Wildlife Zoo, but you can’t take it on your arm. In other states, however , it is probably allowed (e.g. Queensland).

Update: Our dream has come true and we were able to hold a koala on our arms at George Wildlife Park in Adelaide 🙂

Since we are total underwater fans, we visited the Sea Life Aquarium in Darling Harbour, which houses around 13,000 marine animals. These included sharks, rays, penguins, freshwater fish and many reef fish. In addition, the Aquarium houses 2 dugongs, which are similar to the Manatees in Forida, with which we were able to swim in Crystal River at the beginning of our world tour. The little Australian platypus was especially funny, as we had never seen it before – even in aquariums. We had seen a documentary about these strange animals on Youtube.

We were already very happy about the fish market, which was founded in 1945, because we have read quite often in brochures that it should be the “largest active fish market in the southern hemisphere” and the “third largest fish market in the world”. Unfortunately, the fish auction halls are not open to the public, which is why the “fish market” is limited to fish restaurants and a few counters selling fresh fish. Unfortunately, you do not have access to the wholesale auctions for fresh seafood as a tourist.

Update: In November 2016, the government announced that the fish market would move to a new 35,000 square meter complex on an adjacent site. The new complex will cover 15,500 square metres of seafood sales space, compared to 6,582 sqm for the existing site.

In the afternoon we went to one of the most famous beaches of Australia: Bondi Beach. It is located about 7 km from the city centre and is easily accessible by bus from the city centre. The beach itself is not really that big with a length of 1.5 km, but is one of the most famous surf spots in the world. From Bondi Beach there is a beautiful beach walk along the coast, which leads over Tamarama Beach and Bronte Beach to Waverley Cemetery and we then walked along in bright sunshine. The views were fantastic. After the end of the trail we walked a bit further to the Waverley cemetery, which is by the sea and where some famous Australians have been buried.

The Sydney Sykline at night

In the late afternoon we visited the Harbour Bridge again to photograph the city, the harbour and the opera house at sunset and dusk. It got a bit cool, but the view of the city was breathtakingly beautiful. At the end we took a picture of the illuminated Harbour Bridge and then walked back to our hotel.

Sydney has several Starbucks stores and also its own beautiful cup 🙂

The Starbucks City Cup of Sydney