Our last destination on the east coast of Australia was the city of Cairns in the north of the state of Queensland, from where we had booked a sightseeing flight over the Great Barrier Reef and a three-day diving cruise.

From Airlie Beach we started in the morning with our rental car and took a good 8 hours for the 630 km long route along the east coast of Australia with a small stop. The ride on the Bruce Highway (A1) is not very spectacular. The largest place on the route is Townsville (190,000 inhabitants) and in general you can pass many sugar cane plantations. Other smaller towns on the line include Bowen, Ayr, Tully, Innisfall and Gordonvale. Since the Bruce Highway is not a direct coastal road, unlike the Great Ocean Road, the sea is rarely seen.

In the late afternoon we arrived at our hotel in Cairns. We had booked a room at the ibis Styles Cairns, which is close to the centre. The location is great, you are in a few minutes at the Esplanade, in the nearest supermarket or in the shopping center. On the first night we had a room right next to the elevator, which was terribly noisy. In the two nights after that we got another room, which was located at the end of the hallway. That was great and we could sleep in peace. The rooms are simply furnished, some of them have gotten a bit old. But it is enough. The free Wi-Fi worked more badly than right. The bathroom is equipped with shower gel, shampoo, conditioner, body lotion and shaving cream. Free parking is available behind the house in a very limited number.

The city of Cairns has a population of about 150,000 and is located in the north of the state of Queensland in Australia. Cairns is the fifth largest city in Queensland and ranks 14th in Australia. Cairns was founded in 1876 and named after Sir William Wellington Cairns, Governor of Queensland. It served as an export port for gold and other mineral resources mined in the mines west of the city on the Hodgkinson River. Later it developed into a railway head and an important port for the export of sugar cane, gold and other metals, minerals and agricultural products from the surrounding coastal areas. Cairns is a popular tourist destination as it has a tropical climate and access to the nearby tropical rainforest and the Great Barrier Reef, one of the seven natural wonders of the world. The Great Barrier Reef can be reached in an hour and a half by speedboat. Popular attractions include Tjapukai Aboriginal Cultural Park, Skyrail (a 7.5 km long cable car to Kuranda) or AJ Hackett Bungee Center in the rainforest. Although Cairns is located directly on the sea, the city has no natural beaches. There is an artificial lagoon filled with salt water and a 3 km long esplanade with playgrounds, green areas, seating and barbecue facilities.

Our round trip with GSL Aviation

In Airlie Beach we flew a few days ago over the Barrier Reef. Since Cairns is about 700 km further north, we wanted to see another part of the over 2,300 km long Great Barrier Reef from above in comparison. With GSL Aviation, we had chosen the same agency with which we had already made the sightseeing flight in Airlie Beach. At noon we were picked up by a shuttle at the hotel and driven to the airport. And a short time later, after a short safety briefing, we went to the runway.

The route of our round flight “Reef Hopper Scenic Flight”

Our “Reef Hopper Scenic Flight” lasted a total of 45 minutes and went over the following parts of the Great Barrier Reef. 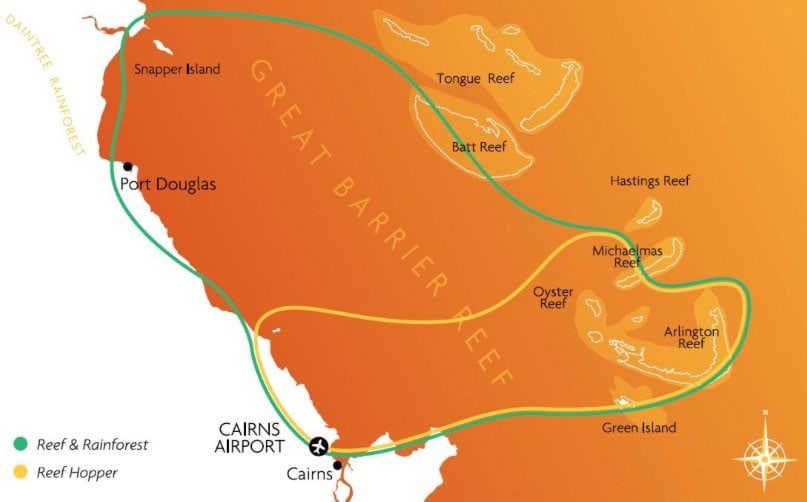 Our flight route (yellow) over the Great Barrier Reef

Our flight over the Great Barrier Reef

First we made a swivel over Cairns. Then we passed Green Island, a small coral island with rainforest – so unique in its kind within the Great Barrier Reef. The island is a national park, houses 46 luxury suites and is a popular day trip destination for tourists. Afterwards we continued over the various small reefs, such as Arlington Reef, Upolu Reef, Double Island and Palm Cove.

The view of the reef was really beautiful. In comparison, however, we liked the reef in Airlie Beach a tick better. Back we went along the coast back towards Cairns Airport, where we landed well after three quarters of an hour.

The Esplanade & lagoon pool in Cairns

From the shuttle bus we dropped off immediately after the flight at the Esplanade of Cairns. The highlight and tourist magnet here is the lagoon pool directly on the beach promenade, which is really beautifully laid out and invites you to swim, sunbathe & relax. Around it there are large sunbathing lawns with picnic and barbecue areas as well as a music stage. And best of all, it’s all free, you don’t pay for admission here. So we just let our feet dangle in the cool wet and enjoyed the rest of the day.