Today we had two other Mayan ruins on our agenda: Edzna and Uxmal.

The route of our current tour

Our route today first took us from Campeche via the highway to Edzna. By the way, the roads here on the Yucatan Peninsula are very good. Wouldn’t we have expected that now. There are hardly any potholes and you can drive fast. Only the many bumps (“speed breakers”) in the small Mexican villages are annoying – that can be 10 to 20 pieces in a 500-metre-long village. From Edzna we went on to Uxmal and in the late afternoon to Merida.

The Mayan site of Edzna

After about 65 km of driving we first reached the Mayan site of Edzna, which was probably settled around 400 BC. Among researchers, the site is particularly interesting because of the water drainage technology developed here and the extraordinary facade of the so-called palace pyramid. The center of the complex is the Gran Acropolis, an elevated building complex with a five-storey palace pyramid. Unfortunately, entering the pyramid has been prohibited since 2010. We spent about 1.5 hours in the facility and looked at the most diverse building complexes.

Here is a panoramic picture of the Gran Acropolis in Edzna:

Afterwards, our journey continued to the Mayan site Uxmal, which, in contrast to the two sites visited so far, was much more touristic. The parking cost fee, the entrance fee was three times as high and there were many souvenir shops.

Uxmal was a large and culturally important city of the Maya, whose ruins are now a UNESCO World Heritage Site. The central buildings of the old town of Uxmal have been very well restored, so that you can get a good impression of what it might have looked like here in the past. Immediately after entering the complex, we were already standing in front of the 45-metre-high Adivino Pyramid, which is the largest and most striking building in Uxmal is. The pyramid has a rectangular floor plan, but wide rounded corners. One or the other iguana can also be seen here on the site.

Here, too, we spent about 1.5 hours in the facility and looked at the different buildings. Here you even had the opportunity to climb the main pyramid,from which one had a wonderful view of the entire site. This pyramid is one of the few that can still be committed. On the way back to the exit we walked a little around the pyramid of the fortune teller.

Our hotel in Merida

In the late afternoon we went another 80 km to Merida, where we had booked a room at the ibis Hotel. Free parking is available on the hotel grounds. The room was not very large, but functionally furnished (desk, small corner cabinet, TV). The bathroom was also ok – clean and tidy. WIFI worked very well. The breakfast was great and very tasty.

Our room at the ibis Hotel Merida 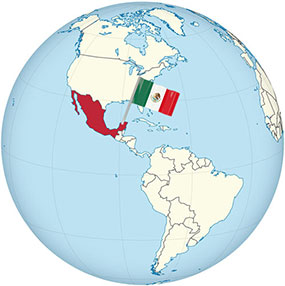