This year we want to explore Germany in particular. After we had already visited the beautiful Eltz Castle, the suspension rope bridge Geierlay and the city of Trier in 2018, we have now spent 4 days short holiday on the Middle Moselle. Our first stop here was the small town of Traben-Trarbach, from where we could explore the surrounding area very well.

Things to know about Traben-Trarbach

Traben-Trarbach is located in Rhineland-Palatinate directly on the Moselle and has about 5,500 inhabitants. The city is located about 40 km northeast of Trier and about 60 km southwest of Koblenz (Google Maps). With a total area of 3,135 ha, Traben-Trarbach is the largest city on the Middle Moselle in terms of area, a large part of which is forest. The Moselle divides the city into two parts: the district traben lies on the left of the Moselle in the Eifel and Trarbach to the right of the river on the Hunsrück side.

Panoramic view of the Moselle and Traben-Trarbach

The Hotel Goldene Traube – by Neugart

For two nights we stayed in the modern Hotel Goldene Traube – by Neugart, which is located on the Trarbach side (on the right of the Moselle) in the centre of the city.

We arrived in the early evening and were warmly welcomed by Daniel Neugart, who runs the hotel with his wife Dorothe. After a nice conversation and the first tips we moved into our room. The hotel has 30 newly renovated comfort rooms, which are modern and fresh in the interior design and thus have contemporary living comfort. The rooms are spread over two buildings: some of the rooms are located in the main building, which also houses the reception, restaurant and roof terrace, and the remaining rooms are located directly opposite the annex. We had a superior double room on the top floor in the annex building and were therefore more than happy. The room is very spacious with a bedroom, separate living area with TV and a great roof terrace, which we had exclusively for us.

In the morning, a rich breakfast buffet awaited us in the restaurant of the main building. Due to the current Corona situation, one had to choose one of three breakfast times the night before, because otherwise it would have become too crowded in the restaurant. Apart from the obligatory mouth-nose mask, which has to be worn in the restaurant and during the walk to the buffet, everything was normal and the hygiene standards were implemented super. The breakfast buffet offers everything your heart desires: juices, rolls, croissants, freshly cooked eggs, a small selection of hot dishes, various cold cuts, vegetables, salmon, yoghurt, fruit salad, Bircher muesli, nuts, cornflakes and much more – there are no wishes left to 😊

A highlight of the hotel is the spacious roof terrace in the main building, which is freely accessible to every hotel guest. It is equipped with cosy lounge furniture, so that you can relax here after an eventful day and enjoy the view over the roofs.

By the way, the hotel does not have its own parking spaces, but there is plenty of parking around the hotel, where you can park free of charge from 6 pm until 8 am in the morning. And during the day you are usually on the road anyway 😉

The sights in Traben-Trarbach

Even if the city is not so big, there are some nice sights that you should not miss either a walk through the city or a short hike/car ride.

Other buildings worth seeing in the city are the town hall of 1833, the city tower, from which one has a beautiful view over the roofs of Trarbach and the old station building in Traben. Somewhat unusual, but certainly quite interesting, is the Buddha Museum which opened in 2009, which contains about 2,000 Buddha figures. If you are a fan of mini golf, you should not miss the oldest mini golf course in Germany, which was built in 1955 in Traben-Trarbach.

The ruins of the Grevenburg

Above the town on the Trarbach side is the ruins of the Grevenburg, which was built around 1350 and was destroyed after several sieges in 1734. Today there are still many foundations of the Burganalage and the western facade of the former commander’s house. From the bridge gate you can reach the castle via a hiking trail in about 20 to 30 minutes.

The Spitzhaus in the town of Wolf

In the Traben-Trarbach district of Wolf, the Spitzhaus, which you will automatically encounter during a local crossing, is a great photo motif. In addition, just outside the village you can admire the ruins of the Wolf monastery, which is located on the Göckelsberg at an altitude of 230 m. The Church of Our Lady, which had already been mentioned in 1255, is one of the oldest parish and Marian churches on the Moselle. 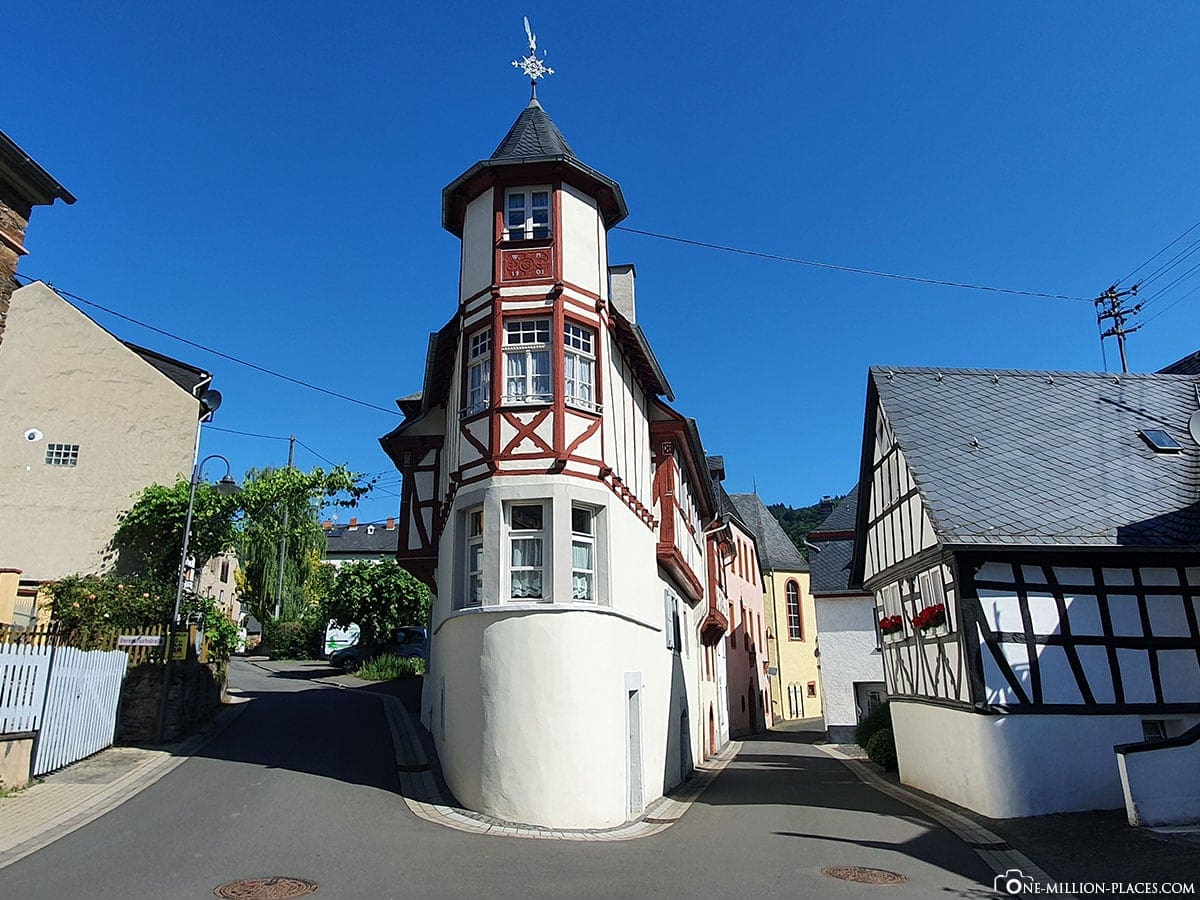 The Spitzhaus in the district of Wolf

The view of the Moselle from Starkenburg

About 9 km from Traben-Trarbach lies the ruins of the Starkenburg, which towers 250 m above the Moselle in the municipality of the same name. Even if there is almost nothing left to watch from the castle, you have a fantastic view into the Moselle valley from up here.