On our second day on our river cruise with VIVA Cruises on the Rhine, we headed for the small town of Enkhuizen, a charming harbor town directly on the IJsselmeer with many old warehouses and historic merchants’ houses.

Things to know about Enkhuizen

On the site of today’s Enkhuizen there was already a small settlement in the year 1000. The town charter was not granted until many decades later in 1355. Over the centuries, Enkhuizen developed into an important place for herring fishing. Numerous new ports were built, so that around the year 1600 over 3/5 of Holland’s herring fishing ships were active from Enkhuizen. But over the years, the city “fell into disrepair” due to increasing trade competition from home and abroad. Only with tourism did it go up again from 1900. Today, Enkhuizen with its 18,000 inhabitants is known as a Dutch water sports center and attracts many enthusiastic water sports enthusiasts, especially in the summer months.

The location of the city of Enkhuizen in the Netherlands

The Cruise port of VIVA TIARA in Enkhuizen

With our ship VIVA TIARA we moored at the pier Gependamsteiger, so it was only a short walk to the city center of Enkhuizen. For the exploration of the city we had after breakfast just under three hours, because our layover time in Enkhuizen was from 0.00 to 12.30 o’clock.

The sights of Enkhuizen

Actually, Enkhuizen can be described as a large open-air museum, because if you walk through the city, you will come across one monument after the next. After all, there are over 350 national monuments in the town. Of course, we didn’t see all of them, but a few beautiful buildings, merchants’ houses and churches were on our way through the city.

The Churches in the Old Town

In Enkhuizen there are some churches in the old town. The Zuiderkerk is a two-aisled, late Gothic hall church from the 15th century with vault paintings. The Westerkerk was built around the year 1470 as a three-aisled church. Interesting we found the wooden, beige church tower from 1519, which is located right next to the church entrance. Today, the church serves as a cultural center and is one of the top 100 Dutch cultural monuments.

The most famous sight in Enkhuizen is probably the Drommedaris, a mighty round tower from 1540 and the last remnant of the former city wall. It served as a defensive gate for many decades and protected the entrance to the port. After several restorations, the tower can now be seen again in its full beauty.

We liked the area around the Drommedaris the most in the city. The various brick houses on one side of the canal, on the other a small island with beautiful flowers and a jetty, from which you have a fantastic view of the old fortified gate – somehow totally idyllic 🙂 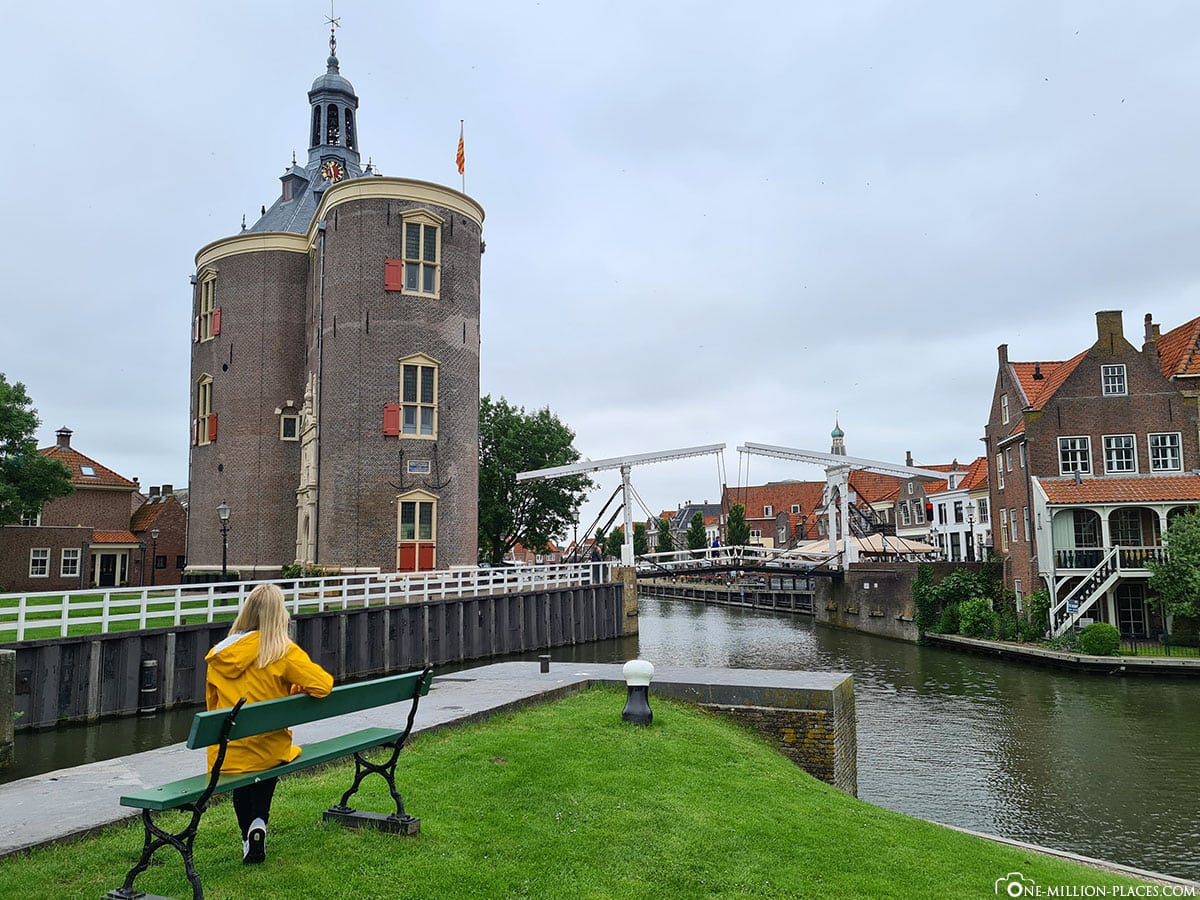 View of the fortress tower Drommedaris

The most visited museum in the city is the Zuiderzee Museum, which consists of two parts: an open-air museum and an interior museum housed in a 17th-century warehouse. Both parts of the museum are about 1 km apart and can be reached on foot.

From the outside, we were able to take a look at the open-air area opened in 1983, which is located at Compagnieshaven. Here you can see a reconstructed, typical Zuiderzee town and a fishing village from the period between 1700 and 1900. By the way, the buildings on the site do not all come from the surroundings of Enkhuizen, but were brought to the museum from various places around the IJsselmeer.

During our city tour we could see many other buildings and monuments worth seeing, such as the old city scales. With its original Dutch Renaissance façade from the 17th century, it has us totally impressive. Just like the former orphanage on Westerstraat, which has a beautifully decorated façade.

When we stumbled across the so-called “Jazz Walk of Fame” in the city, we first asked ourselves why it exists here in Enkhuizen. Quite simply: Since 1974, the four-day “Jazz Festival Enkhuizen” has been celebrated every year in the historic old town.

On our way back to our pier we made a stop at the Snouck van Loosenpark. The park was opened in 1897 and is considered one of the first social housing projects in the Netherlands. It consisted of 1 guard’s house and 50 workers’ houses, which were rented out at low prices to families “characterized by persistent work and good behavior”. Over time, however, the expensive renovation costs and the high maintenance costs of the park increased to the head of the municipality, so that it was forced to sell the houses in the park to a housing company, which are now owners and landlords of the houses. However, the park plot still belongs to the municipality, which remains responsible for the care of the flower beds and the paths in the Snouck van Loosenpark.

A map with all sights in Enkhuizen

On the following map at Google MyMaps we have marked all important sights & photo spots in Enkhuizen.

A map of the sights in Enkhuizen