On the third day of our river cruise with VIVA Cruises on the Rhine, we visited the Dutch capital Amsterdam, which has the highest density of historical monuments (8,500 listed buildings) in the country. Particularly impressive is the semi-circular canal ring ennobled by UNESCO.

Things to know about Amsterdam

Amsterdam, the capital of the Netherlands, has around 870,000 inhabitants, making it the most populous city in the country. The port city is located at the mouth of two rivers into the Ijsselmeer and is often referred to as the “Venice of the North”. The name Amsterdam derives from a dam built in the 13th century with a lock of the river Amstel (Amstelredam). The city is known mainly because of its many canals that run through the entire city. The many small bridges, old merchant and storage houses and the beautiful patrician houses with their very narrow fronts also characterize the cityscape to this day. The most famous sights are besides the canals of the Flower Market, the Rembrandtplein, the Van Gogh Museum, the Vondelpark, the Rijksmuseum, the Anne Frank House and the Red Light District De Wallen.

The city of Amsterdam in the Netherlands

The landing stage of VIVA TIARA in Amsterdam

With our ship VIVA TIARA we docked near the central station at the pier Ruijterkade Oost, so that we reached the city center of Amsterdam in a few minutes. We had exactly 24 hours to explore the city, because our layover time in Amsterdam was from 3.00 to 3.00 the following day.

What to see in Amsterdam

For one day we had time to discover the city with all its sights and historic buildings on our own and on foot. Here it was an advantage that we already knew a little about the city, because we already had the opportunity to explore Amsterdam in 2017 on our way to Hawaii during a longer stopover.

The canals of Amsterdam – a UNESCO World Heritage Site

There is a reason why Amsterdam is often referred to as the “Venice of the North”: 1,400 bridges connect 90 islands with each other; in addition, a crescent-shaped canal belt runs through the city center in the shape of a crescent. Canals are canals or moats that can be found throughout the country. The most famous Amsterdam canals Prinsen-, Keizers- and Herengracht and the medieval moat Singel run south of the historic Old Town. Together they have a length of about ten kilometers, an average depth of 2.40 meters and a width of 27 meters.

The creation of the well-known canal belt began as early as 1612. At that time, there was already a small canal system, which was expanded and expanded. In the 17th century, Amsterdam had a thriving economy and more and more goods were transported by water to and from the city. The canals were therefore used for the transport of goods to the warehouses and merchants’ houses built directly on them as well as for drainage and defense.

Due to its outstanding universal value, amsterdam’s canal belt has been a UNESCO World Heritage Site since 2010.

Along the 38 canals you will find many pretty narrow houses, numerous houseboats and historical monuments. A backdrop that totally impressed us on almost every corner! Especially cool photo motifs are the colorful bicycles of the Flower Bike Man. If you keep your eyes open, you can actually see some of them in Amsterdam.

The colorful dancing houses on Damrak

For us the best photo spot in Amsterdam are the colorful houses on Damrak, a canal in the center of Amsterdam that runs between Amsterdam Centraal in the north and Dam Square in the south. 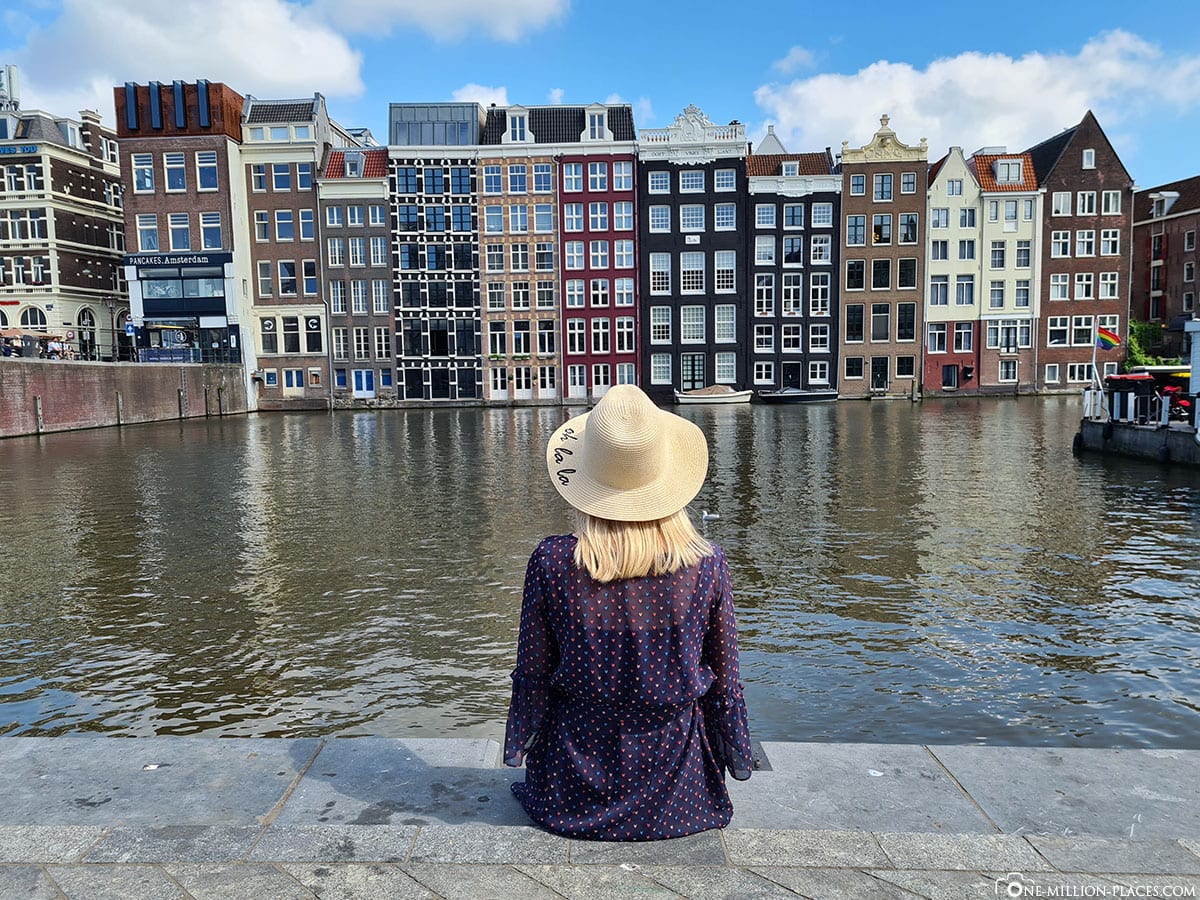 The colorful houses in Amsterdam

Dam Square is located in the medieval city centre and houses numerous buildings, such as the Royal Palace (Koninklijk Paleis). On the right side of the palace is the church of Nieuwe Kerk, a late Gothic basilica and coronation church of the Dutch monarchs, where various exhibitions are shown today.

Passing the beautiful canals for a walk, we have come to the well-known floating flower market, beyond the borders of Holland. Since 1862, fresh flowers, plants, flower bulbs and typical souvenirs have been offered here from Monday to Saturday. And the flowers are of course also a super nice photo motif 🙂

A few minutes walk from the flower market is the quietly located Begijnhof – somewhat hidden in a courtyard. A Beguinage used to be the residence of the Beguines, the female members of a Christian community. The last Beguine died in 2013, ending the 800-year-old tradition of the Beguines. The Beguinage in Amsterdam consists of 47 18th-century residential buildings, grouped around a green courtyard. The current rows of houses are not the original buildings, but a reconstruction, since only one house had survived a fire in 1470.

The Dutch National Museum Rijksmuseum on Museumplein houses a collection of 8,000 exhibits of painting feats as well as Asian art objects and artifacts. The exhibition was less interesting for us, but the architecturally impressive building. We particularly liked the small museum garden behind the building – a really nice green oasis with many park benches.

The story of Anne Frank and her diary is certainly familiar to many: Anne Frank was a german-Dutch child who fled with her family to the Netherlands in 1934 to escape persecution by the National Socialists. From 1942 she lived with her parents and sister in a hidden secret annex in Amsterdam (Prinsengracht 263). She addressed her experiences, feelings and thoughts during this time in a diary to her imaginary diary friend Kitty. In August 1944, Anne Frank and her family were discovered by the Nazis, arrested and taken to a concentration camp, where she eventually died in 1945. Anne Frank’s father Otto was the only one of the family to survive and published his daughter’s diary after the war. In May 1960, the Anne Frank Museum opened, with the aim of preserving the hiding place and telling the story of Anne Frank.

Not far from the Anne Frank House is the Tulip Museum, which we took a closer look at, because after all, the tulip is considered one of the country’s landmarks. In the entrance area there is a normal shop where you can buy flower bulbs and souvenirs. At the back of the cash desk, you will then go to the exhibition rooms, where the history of tulips and the fascination associated with them will be explained and illustrated in more detail.

The next stop was the Het Grachtenhuis Museum in Herengracht, one of the best preserved canal houses in the city. In the museum you can inform yourself within a 45-minute tour very interactively and multimedia about the origin and development of the city and the canal belt.

The churches in the Old Town

In addition to the late Gothic basilica and coronation church Nieuwe Kerk on the main square Dam, there are many other churches worth seeing in the center of Amsterdam. Above all, the Westerkerk is known with its impressive 85-meter-high tower, which is located in the immediate vicinity of the Anne Frank House. It was built in 1631 and is the largest Protestant church in the Netherlands. The oldest church in Amsterdam is the Oude Kerk, which was built around 1300 and is located in the Red Light District. Since 2016, the building has officially been a museum of contemporary art, but fairs are still held regularly. Other churches are the Basilica of St. Nicholas near the main train station and the Zuiderkerk, which has not been a church at all since 1988, but an information center of the municipal housing and planning office.

A boat trip through the canals

With the provider Blue Boat we took a 75-minute canal cruise through Amsterdam. There are a large number of tour operators, but as far as the route of the tours is concerned, the providers hardly differ. We liked at Blue Boat that the tour goes a little longer than the others and there is a small outdoor area in addition to the seating area in the interior, which was wonderful to take photos in peace. Not all boats of the other providers had this outdoor area. Our boat trip went past beautiful canal villas, numerous houseboats (there are said to be over 2,000 here!) and through beautiful, old bridges. If you are in Amsterdam, you should not miss such a canal cruise.

To conclude our sightseeing day in Amsterdam, we have planned something special: a train ride to the nearby city of Zaandam. This can be reached from Amsterdam Central Station within 15 minutes for 6.80 EUR per person. Just a few steps from Zaandamer Train Station, the exceptional Inntel Hotels Amsterdam Zaandam is located. The 4-star hotel boasts an impressive façade consisting of green and blue stacked traditional houses typical of the Zaan area. The architects have really come up with something. In fact, we have never seen such a special exterior façade before. A great photo opportunity!

During our walk through Amsterdam we discovered many more interesting sights and beautiful photo spots, such as the Munttoren at the flower market, which is part of a former city gate. We also liked the Nieuwmarkt with numerous pubs and cafés, which are located around the old city scale.

If you like street art and are looking for an extraordinary Instagram spot, you will be happy about the “Wake me up when I’m famous” saying in Frans Halsstraat 64. Usually, under this saying, there is a bench on which you can lie down. Unfortunately, this was just restored when we were there.

A map with all the sights in Amsterdam

On the following map at Google MyMaps we have marked the most famous sights & photo spots in Amsterdam. We were able to orient ourselves well at these points during our tour through the city. Of course, Amsterdam has many other attractions worth seeing! If we have forgotten an important sight or a special photo spot, please write it to us below in the comments 🙂

A map of the main attractions in Amsterdam

Amsterdam has several Starbucks stores and also its own cup 🙂

The Starbucks City Cup of Amsterdam