Today our 10 days ended in the Galapagos Islands. Just in time at 9.30 am today we were picked up by a taxi in our Hotel Fiesta and taken to the airport of Santa Cruz, which is located about 45 km north of Puerto Ayora on the island of Baltra. From here our flight from the Galapagos Islands took off back to the mainland to Quito.

Our flight from Santa Cruz to Quito

Our plane took off half-one towards Quito with a short stopover in Guayaquil. 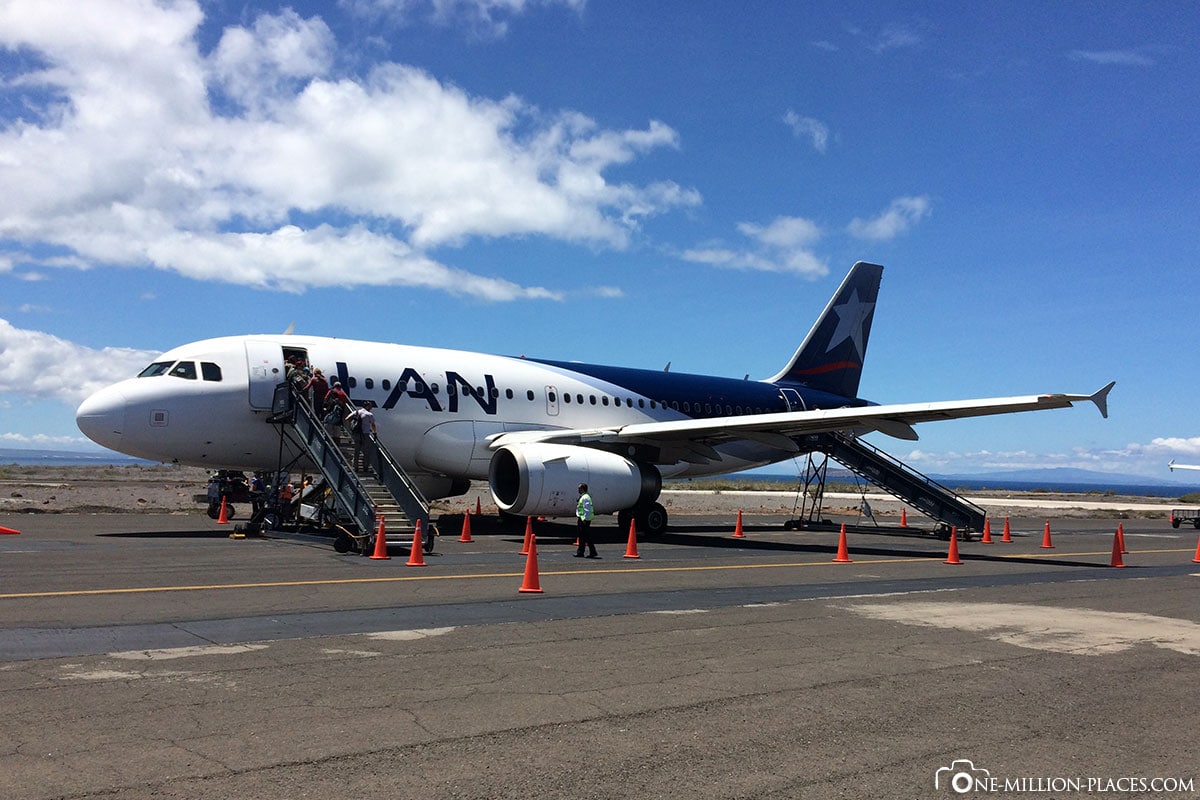 Our flight from Santa Cruz Island to Quito

Our hotel near the airport

Arriving in Quito, we were already expected by a driver who took us to our airport hotel Quito Airport Suites.

We slept at the property for two nights. The (chargeable) pick-up via the hotel worked wonderfully. Quito Airport Suites is just a few minutes’ drive from the airport. This was also the decisive point why we chose this hotel, as we had to go to the airport very early the next day. Here we took a normal taxi, which was a bit cheaper than the transfer via the hotel. The property is surrounded by a garden/meadow with a high wall. When you leave the premises, you have to ring the bell to get back in. Our room was on the 1st floor in the main house. We had a total of 2 rooms with 1 bed each and a separate bathroom. The area was quiet, except for a few barking dogs. The WIFI has worked better, sometimes worse. Everything was clean. A small breakfast was included in the price. You can also pack a breakfast-to-go, if you have to go to the airport very early, for example. The staff are all very friendly and helpful. The contact in the run-up was also great. From the hotel you can reach a bus stop in a few minutes, from which the (quite cheap) bus to Quito stops at regular intervals. The Quito bus terminal is a good 45 to 60 minutes by bus. From there you can take a taxi to the city centre. 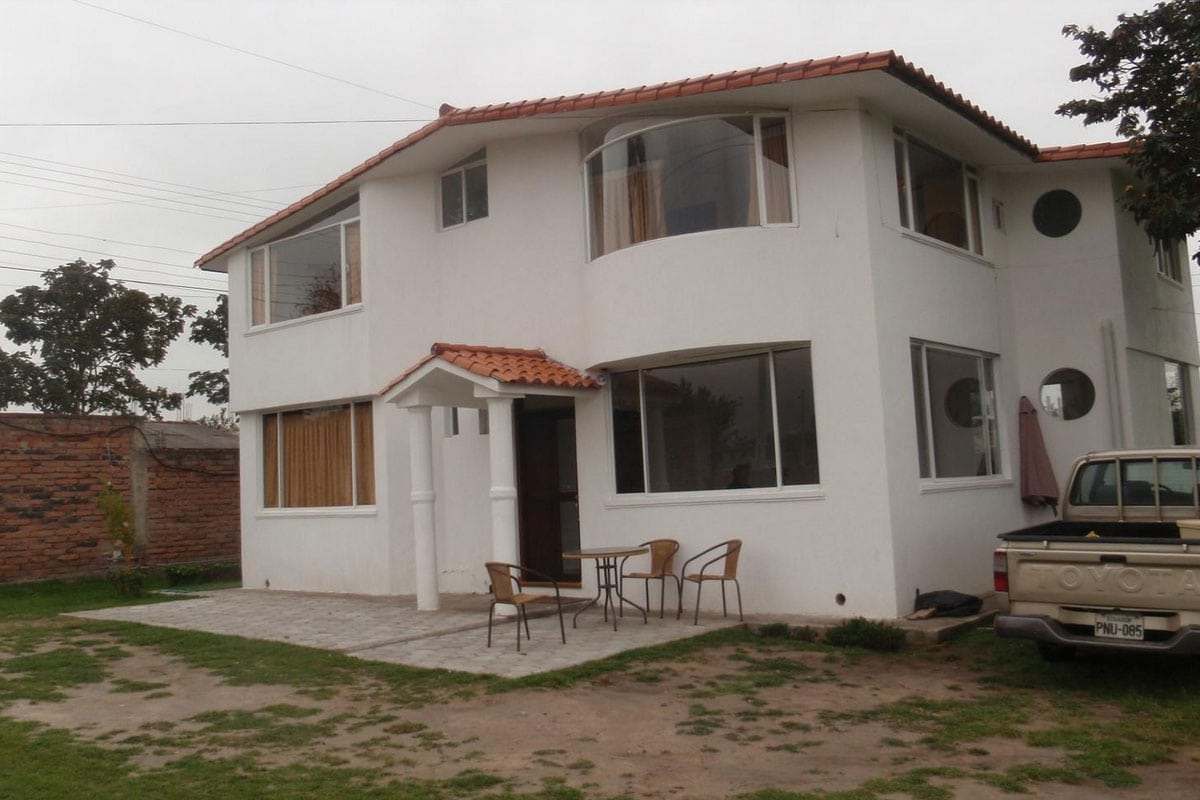 We have chosen this hotel as we have a very early flight to Belize the day after tomorrow, the hotel can be reached quickly from the airport and you can easily get to the city centre of Quito by bus. From the hotels in the city centre, buses or taxis to the airport can take 1-2 hours depending on the traffic, which was a little too unsafe for us. In the evening we had a bite to eat in a local restaurant not far from the hotel and wrote blog posts. For the next day we hadn’t set an alarm clock, because we just wanted to sleep out again.

Quito is the capital of Ecuador and is located – 20 kilometers south of the equator and nestled in the Ecuadorian Andes – at an altitude of 2,850 meters. This makes it the highest capital in the world. Quito was founded on December 6, 1534 by the Spanish officer Sebastien Benalciazar on the ruins of an ancient Inca town and today has about 2.7 million inhabitants. There are still around 80 buildings from the colonial Spanish era. The old town of Quito (Centro Histérico) with its numerous buildings and monuments (including 40 churches and 16 monasteries) was declared a World Heritage Site by UNESCO in 1978 as a “relic shrine of South American art”. Quito is surrounded by 14 volcanoes, including the Guagua Pichincha with 4,794 meters, the Rucu Pichincha with 4,690 meters, the Padre Encantado, Cundur Huachanca and the Cruz Loma.

What to see in Quito

After a late breakfast we drove to Quito with one of the green overland buses at about 11 o’clock, which cost just 1.35 USD (together) for 40 km of the route. Since the bus station Rio Coca, where we arrived, is located outside the center, we took a taxi from there to the old town to Plaza Grande. Plaza Grande is the centre of the historic centre of Quito, which is also a UNESCO World Heritage Site.

In the tourist info we got a map and “rattled” the most important buildings of the very church-rich old town: La Catedral, Palacio Municipal, Iglesia Santo Domingo, Iglesia San Francisco, Iglesia La Merced, Palacio Presidencial, Iglesia San Augustin and the Teatro Sucre. It can be said that the historic old town in Quito consists mainly of churches, small sweet alleys, churches, small shops and again (did we mention it?) Churches 🙂

In the end we visited the really impressive Basilica del Voto Nacional.

From the basilica we took a metro bus back to the Rio Coca bus terminal and from there by intercity bus to our hotel. Since our plane goes to San Salvador and then on to Belize tomorrow morning already at 5.30 o’clock, we went to bed early today. This was also the last day of our journey through South America 🙂

Our conclusion on 7 weeks across South America

That was 7 exciting weeks in South America! We travelled across Brazil, Argentina, Chile, Bolivia, Peru and Ecuador and experienced insanely beautiful things and got great impressions.

… New Year’s Eve spent at Copacabana
… the christ statue seen
… made a helicopter flight over Rio, because from above the city is simply beautiful
… experienced the vastness of the Amazon
… stood in the spray of the Iguazu waterfalls
… have explored millions of cities such as Sao Paulo, Rio de Janeiro, Buenos Aires, Santiango de Chile, Lima or Quito on foot
… our mirror images in the Salar de Uyuni are viewed
… were 11 days on the Galapagos Islands
… were over 5,000 meters high in the Andes
… have boarded a plane a total of 15 times
… have wandered through nature
… have explored wildlife above and under water
… they have been on Lake Titicaca
… have climbed volcanoes
… and Machu Picchu.

And best of all, everything worked as we planned in advance. We didn’t regret a day of planning – it was just as perfect 🙂

We were always warned in advance about South America ” be careful.” Fortunately, we can say that we have had absolutely no bad experiences in the 7 weeks. All the people have always met us very friendly, even if you often can’t get any further with English. Even an easy order at MC Donalds can be a big challenge! We really wondered how Brazil has just won the World Cup or how it wants to manage the Olympics next year???

It should also be noted that:

– South America has beautiful, unique landscapes
– somehow here is felt every downtown UNESCO World Heritage Site
– we have seen with the Christo Redentor and Machu Picchu 2 of the 7 new wonders of the world
– the hygienic conditions sometimes require a lot of getting used to
– because it is partly developing countries, prices are sometimes really fierce
– despite the rainy season, we almost always had perfect weather
– Spanish is not even so difficult to understand after 7 weeks
– you meet Germans everywhere 🙂

In South America, we particularly liked the Galapagos Islands. We found the underwater and overwater world with all its animals, the different islands and volcanoes really very exciting and impressive.