The last day of our Alaska cruisewith Princess Cruises took us from Glacier Bay National Park along the west coast of Alaska to the Prince William Sound. From here, our Scenic Cruise starts through the College Fjord and the final drive to Whittier.

A cruise through the Prince William Sound

To get to College Fjord, you first have to drive through Prince William Sound. The Prince William Sound is a 26,000 km2 bay in the Gulf of Alaska and covers a coastline of more than 5,000 kilometers, bounded to the east and north by the Chugach Mountains and to the west by the Kenai Peninsula. The sound contains 150 glaciers, including 17 tidal glaciers, which are known to dramatically calve huge chunks of ice into the sea.

More than 220 bird species, 30 species of land mammals and at least a dozen marine mammal species can be found in the region. The Alaska Marine Highway System provides year-round ferry services between Whittier, Valdez and Cordova.

The region was the epicenter of the 1964 Good Friday earthquake (also known as the Great Alaska Quake), which, with a magnitude of 9.2 on the Richter scale, was the heaviest quake ever recorded in U.S. history. Today, however, the lake was fortunately mirror-smooth 🙂

The College Fjord in Alaska

The impressive College Fjord is located in the northern part of Prince William Sound. The sound is known for its variety of glaciers, all named after well-known universities such as Harvard or Yale. This extraordinary naming is due to its explorers: in 1899, during an expedition of scientists and scholars, the glaciers were discovered, naming them after renowned East Coast universities – the northwestern glaciers were named after women’s colleges and the southeastern glaciers after men’s colleges. 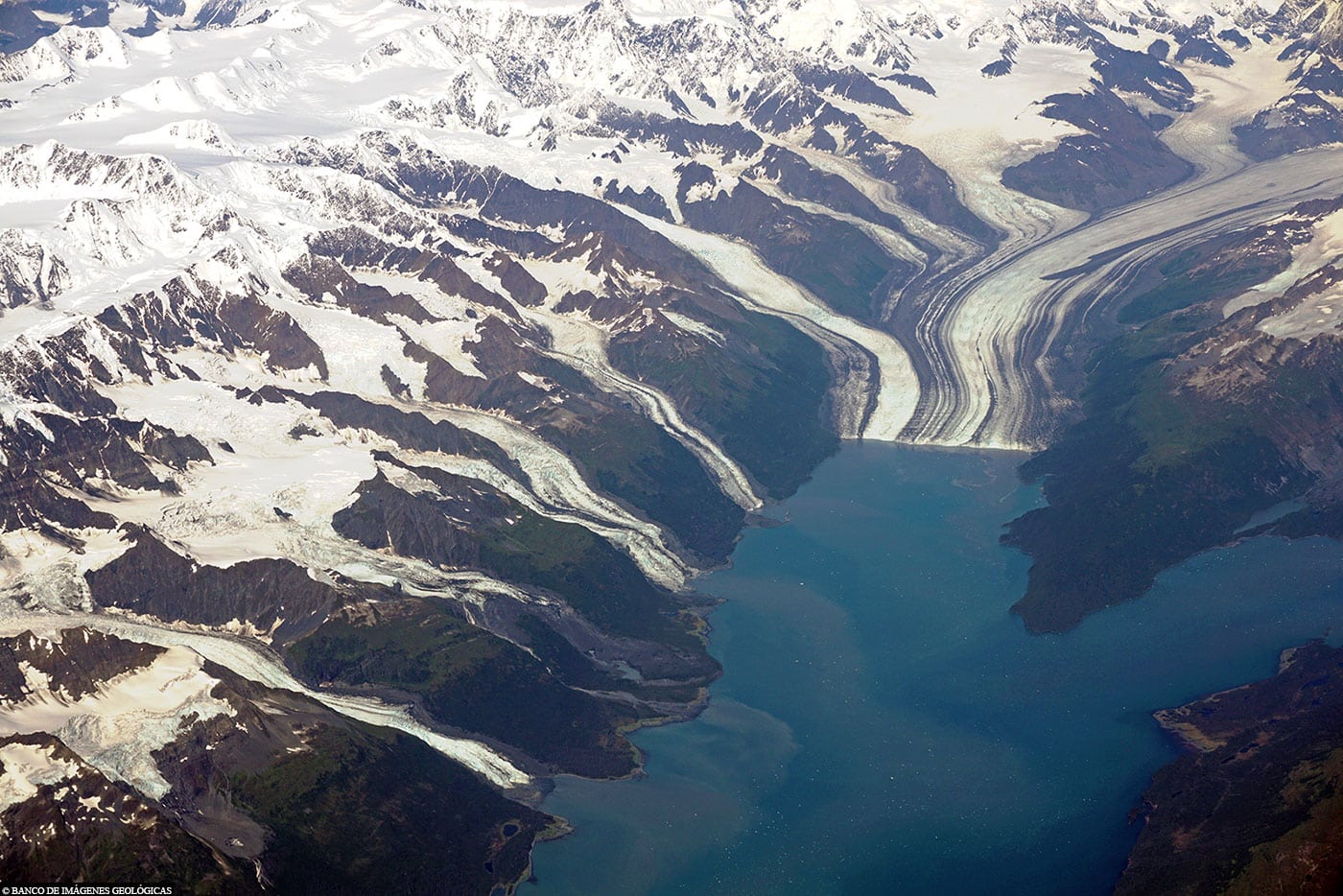 Aerial view of the College Fjord in Alaska

We drove very slowly with our cruise ship – the Royal Princess – through the fjord, to the “Harvard Arm” and the great Harvard glacier. Here we spent some time before the ship turned very slowly to make the journey to Whittier. Again we had perfect weather and were thrilled by the magnificent and beautiful mountain scenery 🙂

Arrival and disembarkation in Whittier

We docked in the middle of the night at 0.30 o’clock in Whittier, the terminus of our Alaska cruise. We had already packed our suitcases the night before and put them in front of the door. Depending on the time of departure in Anchorage, you will be assigned an earlier or later bus transfer if you booked it through Princess. The suitcases are picked up at night and you can get them back at the airport. The rooms must be vacated by 8 a.m., but you can of course stay on the ship for even longer. But since we wanted to use the full day, we decided to transfer at 7.45 a.m. So we were at the airport in Anchorage at 9.30 a.m. and had enough time to explore the area with a rental car on our own until our departure at 8.30 p.m. 🙂 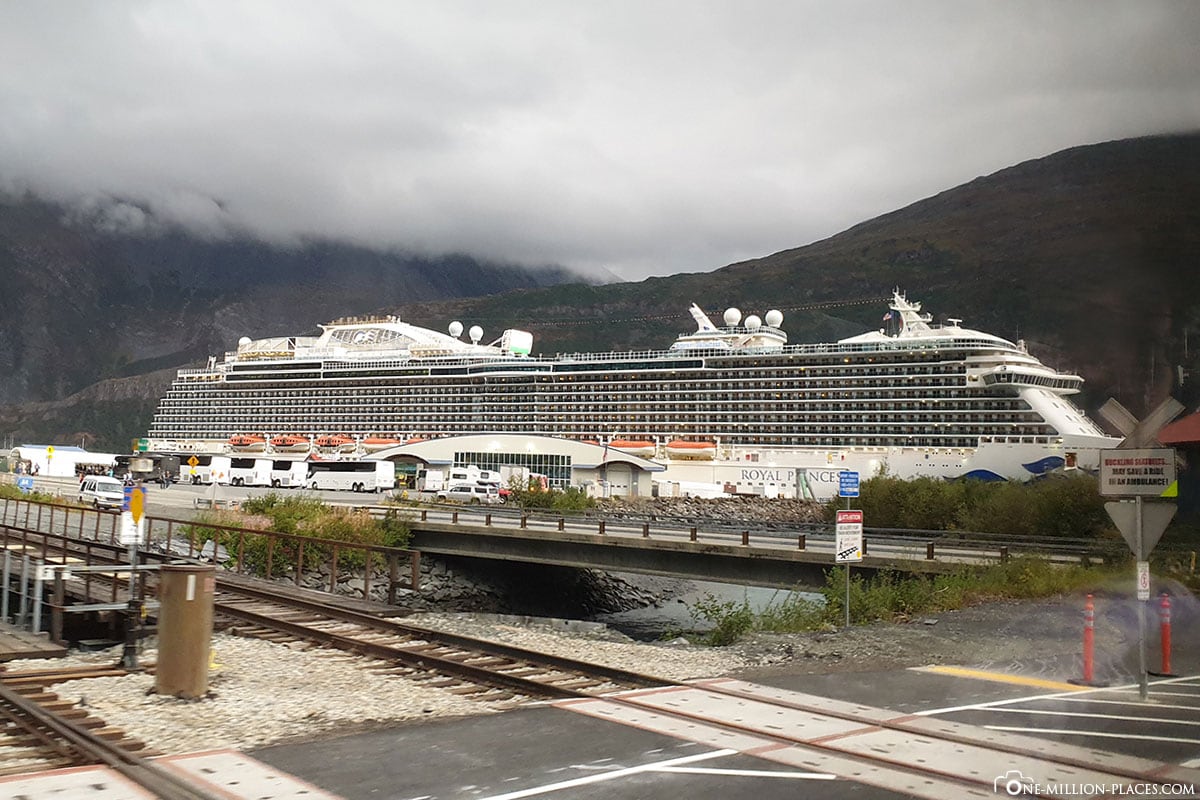 The Royal Princess in Whittier

Things to know about Whittier

After disembarking we got on the transfer bus from Princess and were then driven around in Whittier by the bus driver.

Whittier is a super small town with just 200 inhabitants. During World War II, the U.S. Army began searching for a place where it could build a secret military facility. The proposed base should be an ice-free port and as inaccessible as possible. Whittier fits these requirements perfectly, thanks to the over 1,000-metre-high peaks that surround the city and keep them hidden in the cloud cover for much of the year. But the valley and the village were only accessible by sea. To provide access to the Seward Highway in the north, the army blew up a supply tunnel into the mountain, creating the Anton Anderson Memorial Tunnel. The construction of the tunnel under Maynard Mountain led to the construction of the largest building in Alaska (Buckner Building) with more than 1,000 jobs. The army maintained Whittier until 1960, leaving behind the 14-storey Begich Towers, where most of Whittier’s residents now live.

In 2000, the Anton Anderson Memorial Tunnel was expanded for car traffic and the Alaska Railroad. However, the tunnel is only accessible in one direction, which is why there are fixed times for car traffic to Whittier and back. Trains that also share the road in the tunnel also have fixed times. These can be seen here. For the passage you have to pay 13 USD per car. Today, Whittier is a popular destination for cruise ships because of its rail and road connections to Anchorage and inland. The Denali Express, a connection to Denali National Park offered by Princess Cruises, also has its starting point here.

Whose cruise departs in Whittier or ends here, should keep in mind that the place really has nothing to offer. There are two small accommodations, the 25-room The Inn at Whittier and the Anchor Inn, a car rental company with AVIS, a school, the Prince William Sound Museum, an airfield with an unpaved runway, and a seaplane dock. You can see the place here on Google Maps 😉 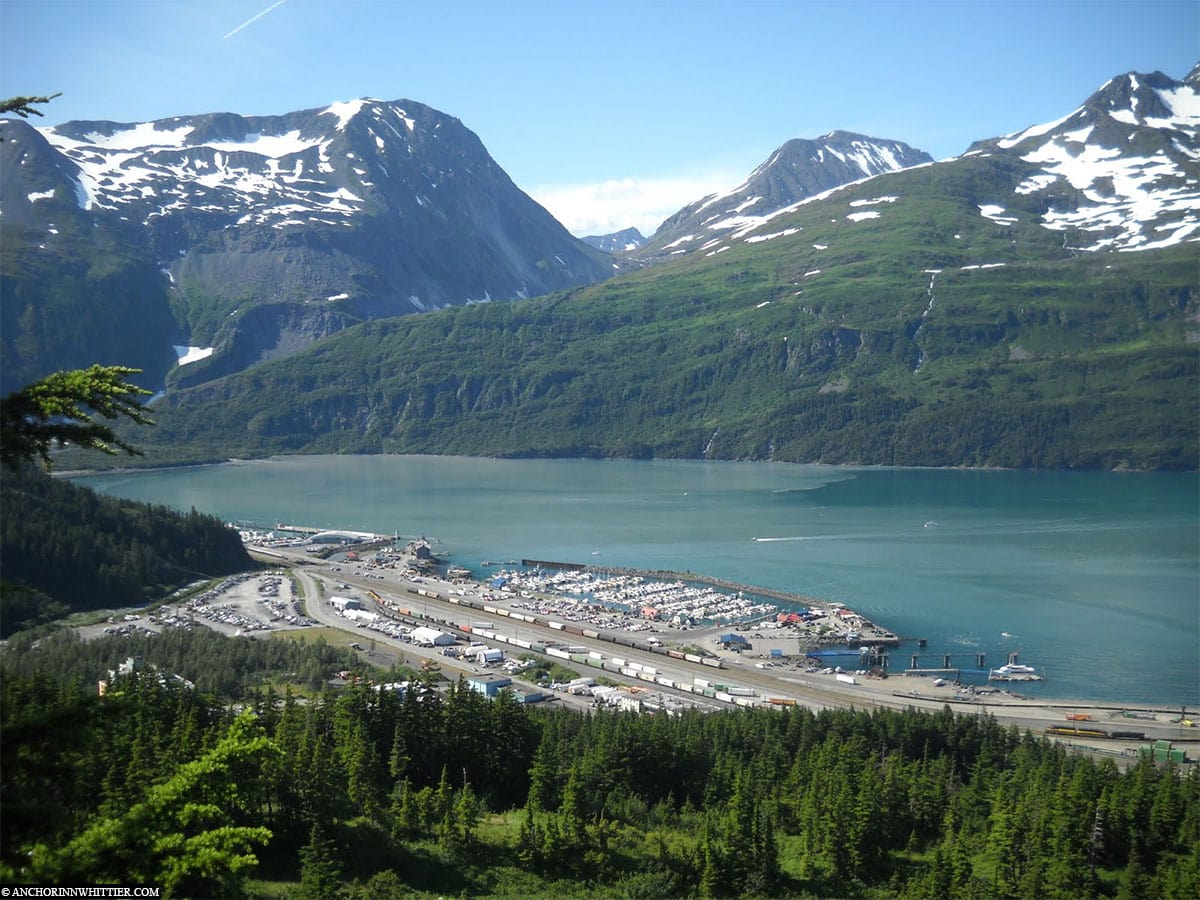 The small town of Whittier in Alaska

The transfer from Whittier to Anchorage

Since our flight departed from Anchorage, we were looking for a good way to transfer. There are no public buses or taxis in Whittier, so you need the following alternatives:

By car: Of course, we would have liked to have taken a rental car to visit the sights on the Seaward Highway on the way to Anchorage. In general, this is also possible, because there is a rental car in Whittier with AVIS. The prices for rent were also quite ok, but since we wanted to leave the car at the airport in Anchorage, we would have had to pay a one-way fee of over 200 USD. Of course, this does not pay off at all.

By train: The Alaska Railroad’s Glacier Discovery Route provides daily service from Anchorage to Whittier in the morning with an evening return trip at 6:45 p.m. The train journey usually takes just under 2 1/2 hours in each direction, so you’re in Anchorage around 9:15 p.m. The price is 89 USD per adult.

By bus: We decided on the arranged bus transfer via Princess. You will be picked up directly at the cruise terminal and is in Anchorage 1.5 hours later. The airport is the first stop, but there is also the possibility to drive to the city center. The price here is about 55 USD per person. However, there are also other providers that offer the bus transfer significantly cheaper (from 35 USD).

With a tour: If you still have some time on the day of departure, you can also book a guided tour via Princess. So you can explore some highlights of the region and then be taken comfortably to the airport or to the city. Tours are available as half-day tours (e.g. with a visit to the Wildlife Conservation Center) or as full-day tours. 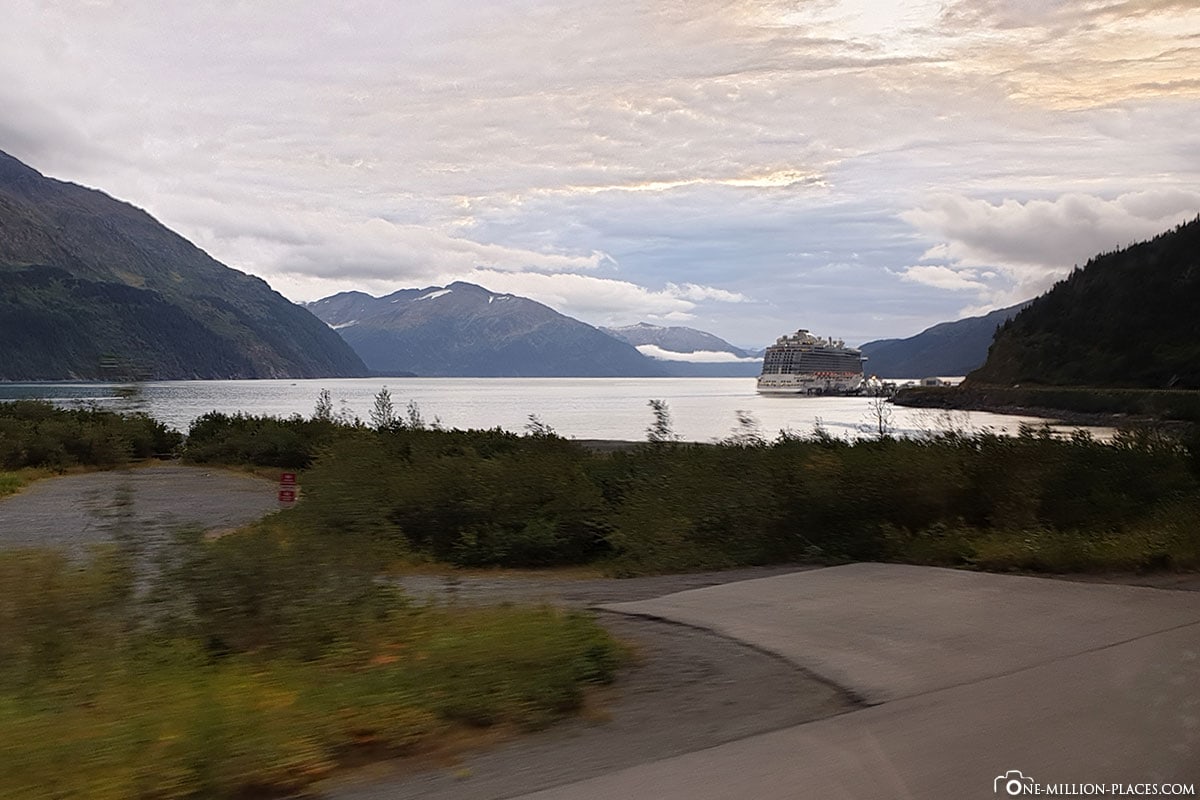