One of the main reasons why we always wanted to go to Alaska is the fascinating landscape and of course the wildlife! Once seeing bears in the wild, it’s been on our wish list for a long time ♥ And where’s better than in Alaska? Unfortunately, we were not lucky in Ketchikan and Juneau. Therefore, for our stop in Skagway we had chosen a very special trip to Haines, where the chances of seeing bears in their natural habitat were very high 🙂

By ferry from Skagway to Haines

Since we had already planned with the Royal Princess at 6.30 am in Skagway, our excursion starts already at 8 o’clock in the morning. The fast ferries to Haines depart from the port several times a day. The boat trip takes about 45 minutes and leads through the Lynn Canal, the longest and deepest fjord in North America. It was still a bit foggy in the early morning, but nevertheless the view of the Coast Mountains and the snow-capped peaks was really nice.

Things to know about Haines

Haines is a small town with 1,700 inhabitants at the northern end of The Inside Passage in Alaska, founded around 1870 by the merchant George Dickinson. Unlike Ketchikan and the capital Juneau, the city – like Skagway – is connected to the mainland and the Alaska Highway via the Haines Highway.

The Klondike Gold Rush (1898-1899) changed this region greatly. During this time, more than a hundred thousand gold prospectors flocked to the coast of Alaska aboard steamships to enter the Klondike River area near Dawson, Canada. Like Skagway, Haines became a starting point for the nearly 400 km long trail (Chilkat Pass) to the Klondike River. Haines is known for a fairly high population of bald eagles and brown bears. In addition, relatively few large cruise ships dock here, which is why the place is not quite as crowded as the Skagway, 30 kilometres away.

In Haines, by the way, there is the first museum in the world dedicated to the preservation and history of the hammer: The Hammer Museum. The museum was founded in 2002 and shows more than 1,400 hammers from antiquity through the colonial period to the present day. 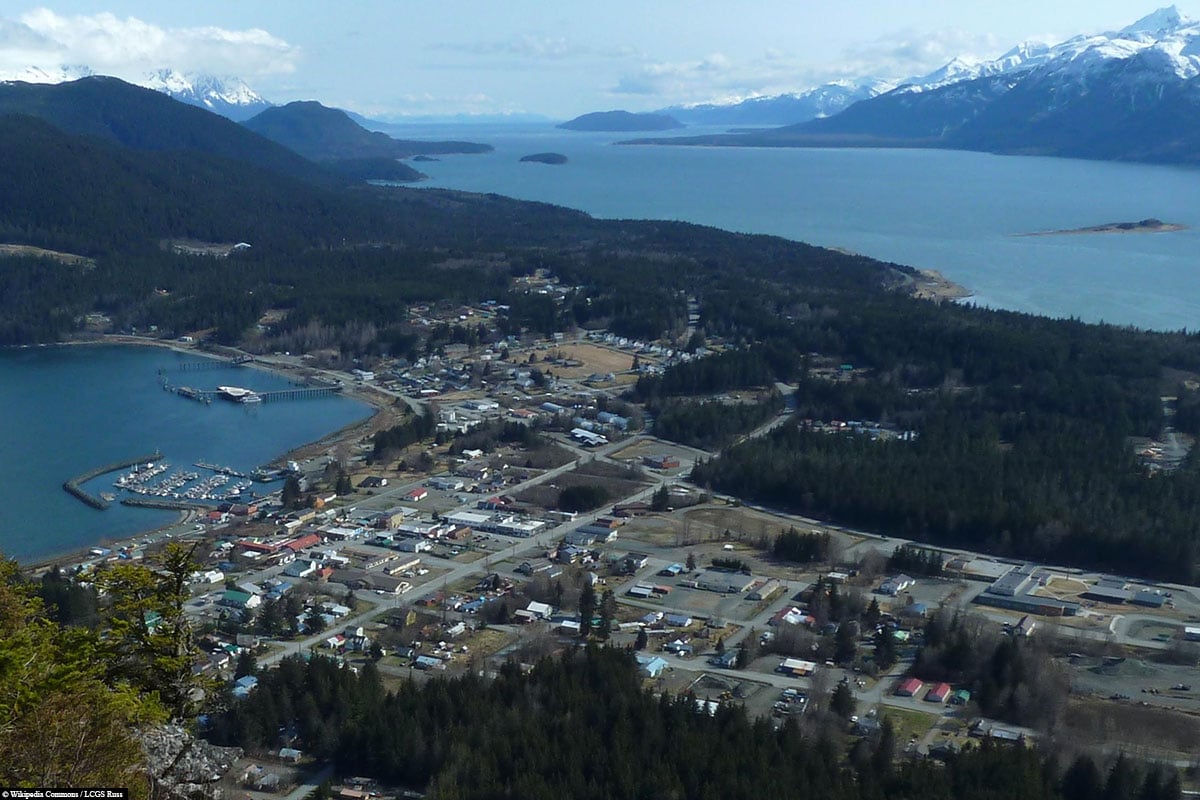 The small town of Haines in Alaska

Directly at the harbour we were welcomed by our tour guides and were able to take a seat on the bus. After a short briefing, our tour started right away. Our guide told us that the fertile Chilkoot Valley is home to brown bears, bald eagles, mountain goats, marine mammals, numerous birds and spawning salmon. So we were very excited about what to expect on the 3-hour drive.

Our first bear right on the road!

And it didn’t take long and there he was – our first bear in the wild! After only 10 minutes on the bus we arrived at the Chilkoot River and suddenly it echoed through the bus “Bear, Bear”. Right on the banks of the river, a brown bear was looking for food. What a sight!

Very excited, we all got off the bus quickly and – with plenty of safety distance – positioned ourselves on the side of the road to take pictures. It didn’t take long for the bear to find a salmon between the stones on the shore, with which it then disappeared relatively quickly across the road into the forest. Seeing this was really indescribably beautiful and we had wanted to see it for so long 🙂 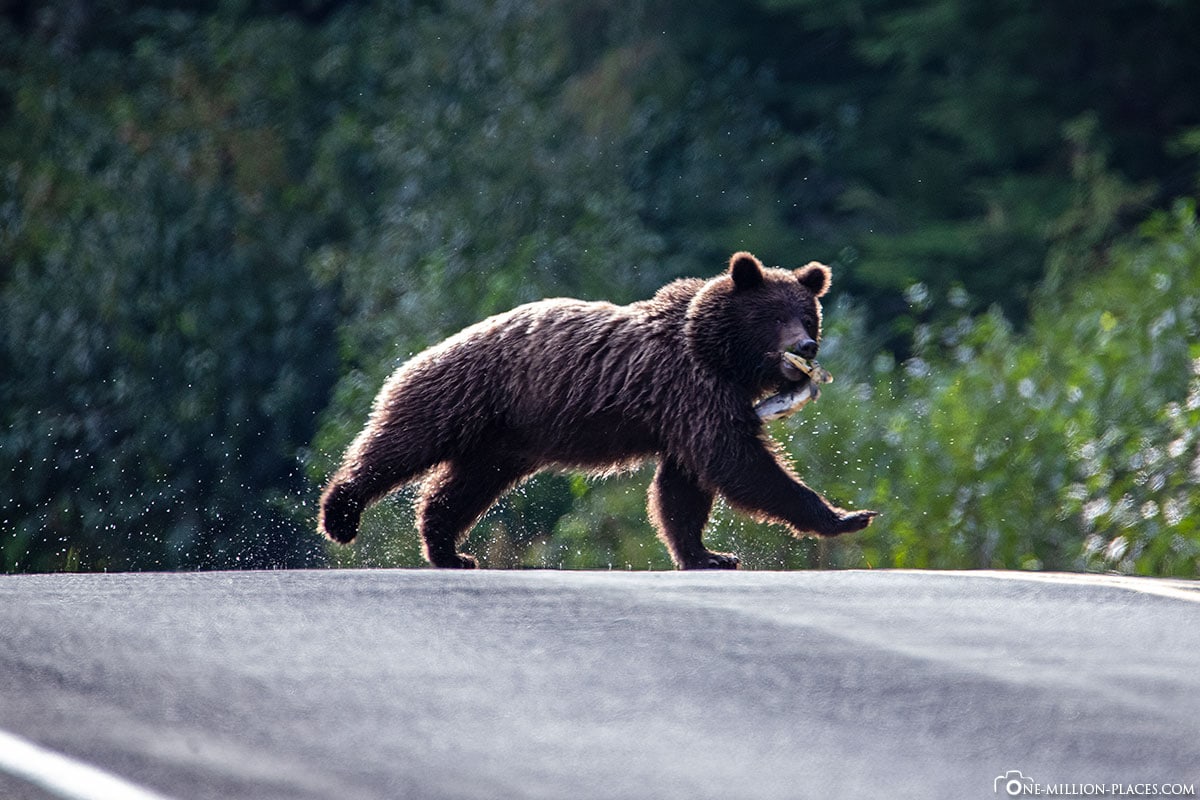 The bear runs across the road with his salmon

Bears and white-cop eagles on the Chilkoot River

Our journey continued along the Chilkoot River. The 32-kilometre-long river rises at an altitude of about 1,000 metres and flows from Chilkoot Lake into Lutak Inlet. In the months from June to October, it is one of the most easily accessible bear viewpoints in southeast Alaska. The reason for this is the so-called “Salmon Runs”, in which thousands of salmon swim upstream to their spawning grounds. This high population of fish attracts the bears, who then hunt for the salmon along the river and at Chilkoot Lake.

In Alaska, by the way, there are five different salmon species:king salmon, silver salmon (coho salmon), humpback salmon (pink salmon), keta salmon (chum salmon) and red salmon (sockeye salmon). Salmon have a rather unusual life cycle and are anadrome. This means that they spawn in the fresh water of the many thousands of rivers and lakes in Alaska and then the juvenilefish migrate into the open sea. Here they grow up and roam the Gulf of Alaska and the Bering Sea. The mature salmon then return to the river of their birth to spawn and then die. And so the cycle begins anew.

In the Chilkoot River there is a large weir for capturing the salmon population. Through a small opening at the weir, the salmon that swim up the river are counted manually from time to time. This weir is an ideal place for the bears, as they can easily get the salmon out of the river. And behold, we could also immediately discover a large bear on the bars, which fished out the salmon there quite comfortably. A few hundred meters upstream we could see another bear in the distance, but it disappeared very quickly in the forest.

So we could see 3 bears!

At the end of Lutak Road is the Chilkoot Lake State Recreation Site, a small rest area on Lake Chilkoot. Here we took a break for about 30 minutes, used the toilets and let the scenery work a little bit on us. Again we could see a young bald eagle.

In the end we were overjoyed that we made this trip. This has cost more than Usd 179 per person. This is certainly a proud prize, but it was definitely worth it to us! Of course, you can also book the excursion and the ferry yourself and perhaps save a little more.