After exploring the small town of Ketchikan yesterday, we went on our Alaska cruise with Princess Cruises to Juneau – the capital of Alaska.

Things to know about Juneau – the capital of Alaska

It is often thought that Anchorage, as alaska’s best-known and largest city, is also the capital – but since Alaska became the 49th state to the United States in 1959, the small town of Juneau has been the capital of Alaska. It is home to the Alaska State Capitol, the Alaska State Museum, and the main campus of the University of Alaska Southeast.

Juneau has a population of about 33,000 and is located on a narrow strip of land bounded to the west by the Gastineau Channel and to the east by the Boundary Ranges, a mountain range of the Coast Mountains. In 1880, gold was found in a creek near the present-day town. Until the 1940s, Juneau was a mining town and the Treadwell mine on Douglas Island was once the largest gold mine in the world. During the Second World War, the mines were closed. Today, the capital is one of the most visited places in Alaska.

Just like Ketchikan, Juneau has no road connection to the mainland! It is the only capital of a U.S. state that can only be reached by plane or ship. The city is connected to the ferry system of the Alaska Marine Highway.

The port info of Princess Cruises from Juneau

Every evening you will find on his cabin the harbour information for the coming destination. The flyer gives a very nice overview of the place and inspires with tips for exploring the region. Here you can download the detailed port info of Princess Cruises as a .pdf version.

The port info of Juneau of Princess Cruises

Our ship, the Royal Princess,has moored at Franklin Dock. With us on the day there were 3 other ships in the harbour, so that there was a lot of activity at the port. For those who have another trip on site, e.g. to the Mendenhall Glacier, you can do so here directly at the harbour. There are several stalls of agencies that want to bring their excursions to the cruise visitors.

The highlight at the harbour is certainly the Mount Roberts Tramway, which takes guests up to the mountain of the same name, from which you have a panoramic view over the city and the region at an altitude of 1164 meters. Since the fog hung very deep in the treetops on our arrival, the gondolas disappeared after only a few meters in the fog. Unfortunately, the view from above may not have been really good.

A walk through the city

The city centre of Juneau is easy to explore on foot and consists of many narrow streets with a mix of new buildings, old shop fronts and picturesque cottages. Within walking distance of the port are the State Capitol Building, Saint Nicholas Russian Orthdox Church, Alaska State Museum, Juneau-Douglas Museum and historic South Franklin Street, which now houses 19th-century historic cottages.

There are also several statues scattered across the city, such as the Fisherman Windfall (a lying bear), Patsy the Dog or the Hardrock Miners. Another monument – The Empty Chair – is dedicated to the 53 Juneau residents of Japanese origin, who were forcibly resettled during World War II and held in internment camps.

When we looked at the most important sights in the city, we made a little detour to the shore of the Gastineau Channel. Here is the Juneau Seawalk, a beautiful waterfront path, at the end of which there is an impressive whale sculpture near the Juneau-Douglas Bridge. Tahku is a life-size bronze sculpture of a transcendent humpback whale rising from an infinity pool. The statue was designed by former Juneau resident R.T. Wallen for the people of Alaska and is visited by more than 1 million visitors each year.

At regular intervals, the fountain becomes active with a water fountain and it actually looks as if the whale is jumping out of the sea. Very impressive! Incidentally, no entrance fee is charged for the Seawalk or the whale sculpture. 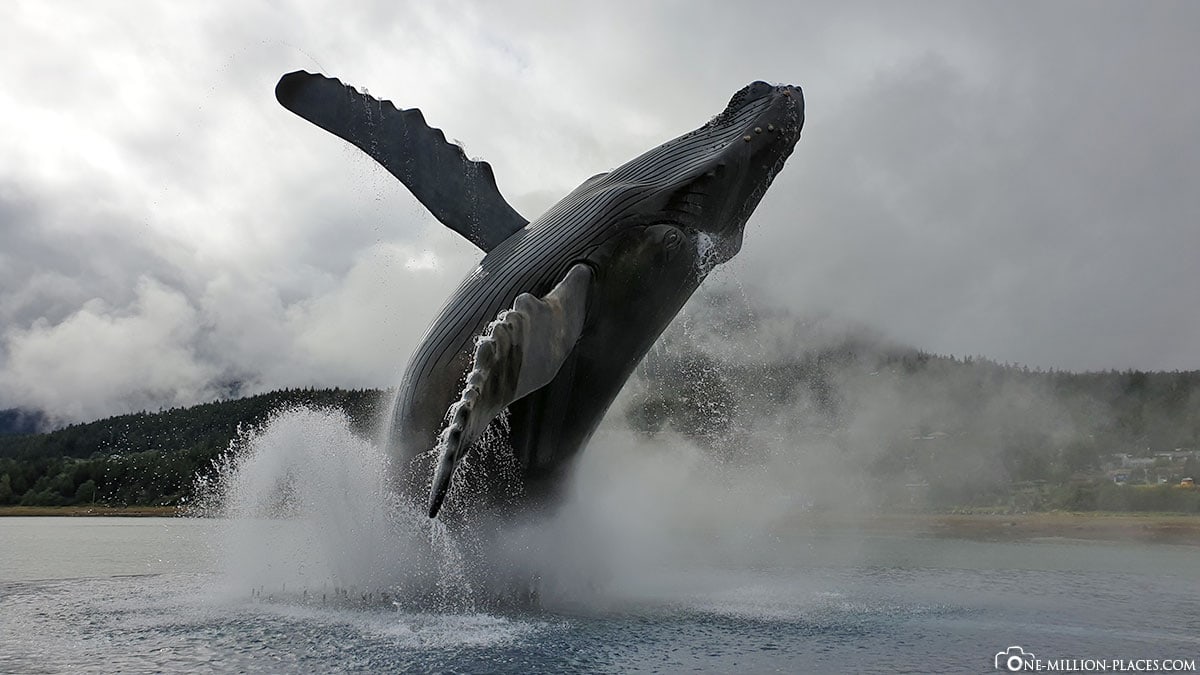 A map of all the sights of the city

On the following Google Maps map we have mapped all the major sights to explore the city on your own: