The “Inter-Island Gold Diving Pass” of the diving school Topdive

During our research for good diving schools in French Polynesia, we came across the diving center Topdive, which offers a so-called Inter-Island Gold Pass. For example, you can buy a 10-way diving card at a discounted price and redeem it in the 13 Topdive centers on 6 different islands. Since Topdive is represented with diving schools on Tahiti, Moorea and Bora Bora, this was perfect for us. For the island of Moorea we had booked for four dives, which were spread over two days.

The diving school Topdive in Moorea

In the morning 7.30 am we were picked up at our Hotel Manava Beach Resort & Spa Moorea and taken to the diving center, which is located in the Hotel Intercontinental Moorea. After we had collected our equipment, we went to the submersible.

The dive sites on Moorea

On the following map you will find the various dive sites of Moorea, almost all of which are located in the northwest of the island. 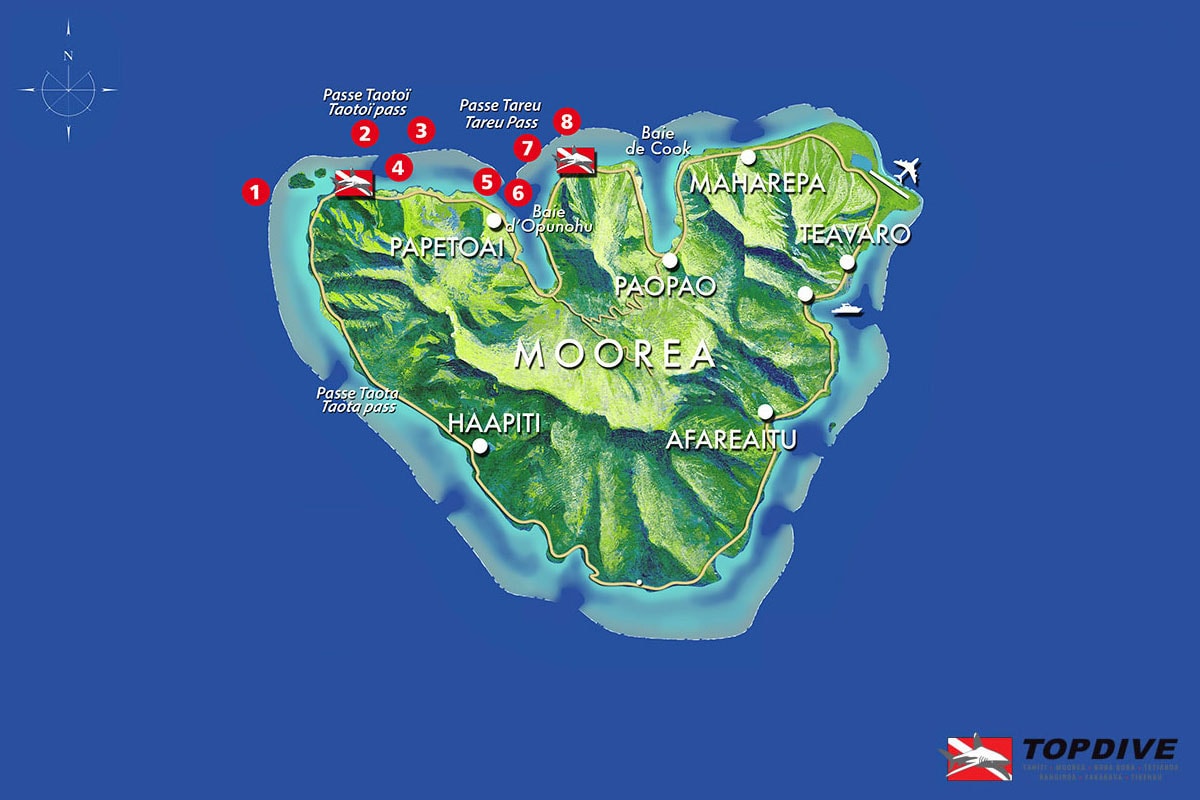 The diving spots on Moorea

On the first day we were on the boat with two diving instructors, so the group was then divided. Our first diving spot was “Les Anémones”, where we saw lemon sharks, blacktip reef sharks, moraines and all sorts of other fish.

After 45 minutes we went back to the boat and went to the second diving spot “Taotoi”. Here we have seen blacktip reef sharks again, as well as turtles, moraines, pusher fish and much more.

One of our favorite spots. Many fishes move from one side of the island to the other, passing through this area. As one of the highlights – you will enjoy the huge moray eels quite impressive.Ocean dive /4mn boat ride — Mooring depth : 35 feet — Maxi depth : 60 feet

Around 12.30 p.m. we were back in the hotel and made ourselves comfortable on our terrace.

The next day it was time to get up early again, because for today our two other dives were on the program. In total we were eight divers and two diving instructors, so we were again divided into two small groups. For the first dive, our instructor had attached a food box to his equipment – we were very excited about what we would encounter in the “Shark Dining Room”. As soon as we went down, the first blacktip reef sharks swam around us, which did not leave us during the entire dive. In total, it was certainly six or seven. A lemon shark has also shown itself once as well as a turtle and many reef fish. We haven’t met sharks so close in any dive, a mad experience! On the second dive in the “Ray Corridor”, to which we went for a few minutes by boat, there was – as the name suggests – a large group of eagle rays to be seen above us.

The Rays Corridor dive is a lagoon dive ideal for beginners, and refresher courses. A site of beautiful coral with a multitude of reef fish. For most divers, there are frequent meetings with white tips sharks and a group of eagle rays (sometimes more than 40 of them). A great experience, even for experienced divers!Ocean dive /4mn boat ride — Mooring depth : 35 feet — Maxi depth : 60 feet

Our video of diving with sharks in Moorea

You can get an impression of all 4 dives and our encounter with the sharks in the following video.