After a few great days on Moorea we were looking forward to our next destination today: the dream island of Bora-Bora in the South Seas ♥

To get from Moorea to Bora Bora we decided to take the ferry to Papeete first and from there fly by plane via Raiatea to Bora-Bora. There are also flights directly from Moorea to Bora-Bora, but they were much more expensive. In order to save something, we have therefore decided on this somewhat longer way. In the early morning we took a taxi from our Hotel Manava Beach Resort & Spa Moorea to the port in Moorea to take the ferry to Tahiti and drive to Papeete airport.

Due to the ferry schedule, we were at the airport far too early and should have waited another 2.5 hours for our flight to Bora Bora. But surprisingly, we were offered an immediate flight with departure in 20 minutes at check-in. Since the airport is not very big, we stood five minutes later at the gate and it was possible to start. In the magazine of the plane you got a little taste of the island.

Approach to the dream island of Bora-Bora

Our flight from Tahiti to Raiatea and then on to Bora Bora was really great and the views from the window show the beauty of the South Seas.

Things to know about Bora-Bora

Bora-Bora is an atoll in the South Pacific and has about 10,000 inhabitants. It belongs to the group of Society Islands in French Polynesia and is located about 260 kilometers northwest of Tahiti. The distance (flight route) to the Australian continent is 5,983 kilometers, to Hawaii it is 4,230 kilometers. Bora Bora is considered one of the most exclusive, luxurious and expensive destinations in the world – so it’s not surprising that 75 of the tourists here are honeymooners. The island has a classic atoll shape with a central mountain with dense vegetation, surrounded by a crystal clear lagoon and a coral hem with numerous reclining motus, which are the remains of the former crater rim. The long main island is 9 kilometers long and at its widest point 5 kilometers wide. The highest elevations are Mont Otemanu (727 meters), Mont Pahia (661 meters) and Mataihua (314 meters). The largest place on the island is Vaitape.

A good hour later we landed on Bora Bora. Aéroport de Bora Bora Airport is located on an otherwise uninhabited coral island (Motu) in the north of the atoll. The runway starts and ends directly on the water.

Prices of hotels on Bora-Bora

In the run-up to our trip around the world we had looked at the different hotels on Bora Bora. Really many alternatives (about 20 hotels) you don’t have and the prices are really beyond good and nasty. Most luxury hotels with mainly overwater bungalows are located on the Motus des Saumriffes. 1st and 2nd place on Tripadvisor are the “Four Seasons Resort” and the “InterContinental Bora Bora Resort & Spa”, where a night costs as much as €3,000 or more – in the cheapest room category, of course, but with breakfast 😉 Here’s an example of the Four Seasons room rates for 1 night in October 2016: 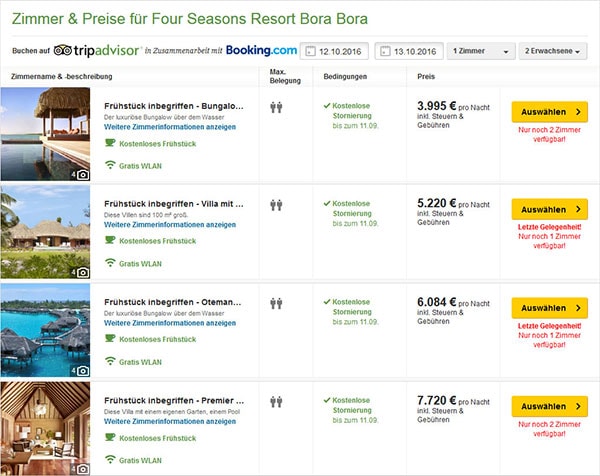 We chose the Sofitel Bora Bora Private Island. For us at 435 € per night still insanely expensive,but compared to the prices of the other hotels a real “bargain”. In our budget mix calculation, the cheap hotels in Asia will hopefully compensate for this later 😉

The boat transfer from the airport to the hotel

At the airport in Bora Bora all the major resorts have their own stand and we were immediately greeted by a Sofitel employee with a flower chain and then taken to the in-house shuttle boat. The shuttle boat rideed through the lagoon, past the mountains of the main island. And then we saw for the first time our resort, which is beautifully located on a small private island in the lagoon.