After arriving on Tahiti from New Zealand yesterday, we will our trip to the island of Moorea.

The ferry from Tahiti to Moorea

In the morning we made our way to the port of Papeete on foot with our suitcases. There are two ferry operators (Terevau & Aremiti) for the route from Papeete to Moorea, which run at different times. We chose the provider Terevau, with whom the crossing took only about 30 minutes. You can even fly the route, which means an incredible 10 minutes of flight time 😉

Things to know about Moorea

The island of Moorea is the little sister of Tahiti in French Polynesia and with 17 km distance also within its sight. The island has an area of 133 km2 and a population of about 17,000. Moorea is geographically one of the Society Islands (islands above the wind) and originated about 2 million years ago from a hot spot of the Pacific Plate. A V-shaped mountain range, an average of 800 meters high – the southern edge of a former volcanic crater – divides the island into a north and south half. The highest elevation is Mont Tohiea with a height of 1,207 meters and Mont Tautuapae with 769 meters. At the northwestern tip of Moorea are the two uninhabited Motu Tiahura and Fareone. 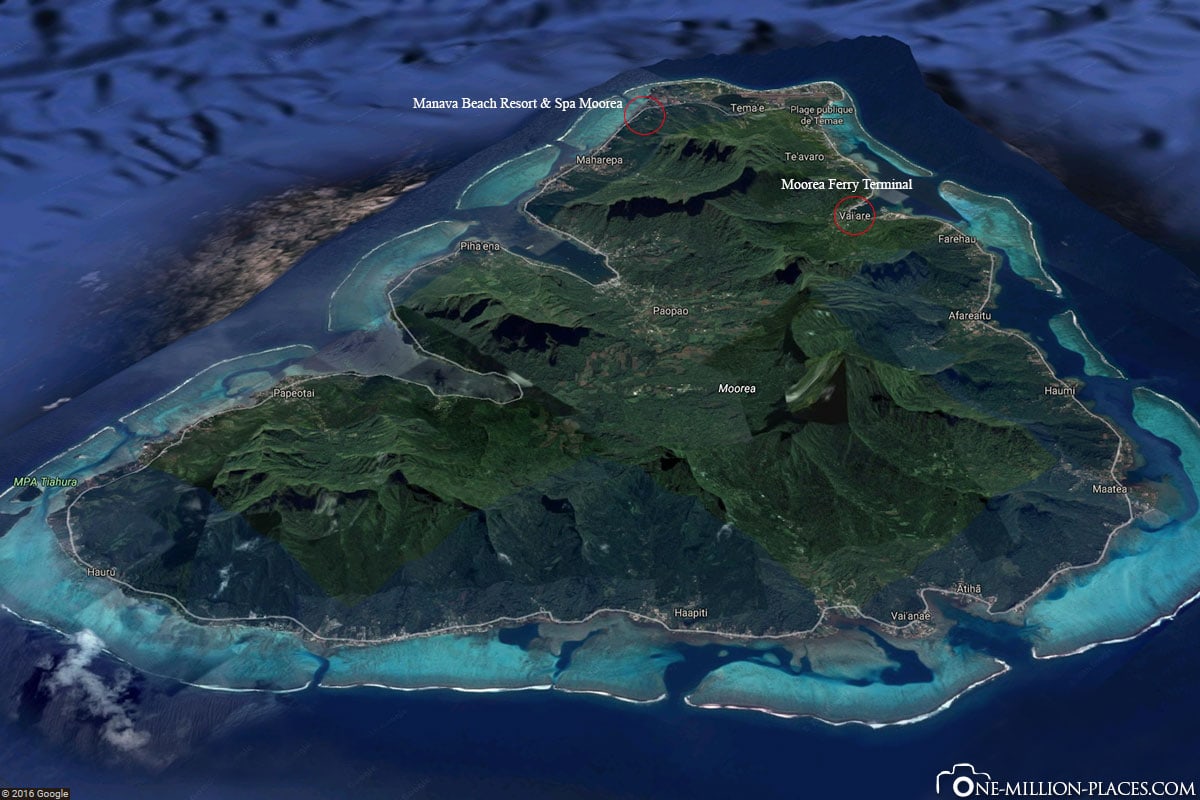 The island of Moorea in Google Maps

At the harbour we took a taxi that took us to our Hotel Pearl Resort & Spa (now Manava Beach Resort & Spa).

The resort is located on the north coast of the island and is just a 10-minute drive from the airport. The resort was built in Polynesian style and has 94 hotel rooms. Although it was only noon, we were able to move into our bungalow. For four nights we enjoyed a great overwater bungalow with sea views. This is 330,- € per night incl. Breakfast it’s far from cheap, but if we’re on such a dream island, you’ll have to treat yourself to something 🙂

We really enjoyed our stay at Manava Beach Resort & Spa Moorea. We had a Premium Overwater Bungalow with great sea views. The bungalow is nicely furnished, there was nothing missing. The breakfast buffet is plentiful and very tasty. In the lagoon just behind the Overwater Bungalows we have seen dolphins, eagle rays, moray eels and many reef fish – really great. Snorkelling equipment and kayaks can be rented free of charge. A supermarket is 5 minutes away, also a few small snack shops. Wi-Fi is free in the reception area. For the bungalows you have to buy it additionally. All in all a great hotel, which we would like to recommend.

Snorkeling in the lagoon

The next few days we spent mainly relaxing, snorkeling and diving. The resort is located directly on a narrow lagoon where you could snorkel beautifully. We have seen many tropical fish, a moraine, puffer fish, a turtle and some eagle rays. On the first day there was even a group of dolphins in the lagoon,just a few meters from our water bungalow. They swam up and down the lagoon a few times and even jumped out of the water a few times. That was a great sight!

Overall, we enjoyed our stay on Moorea ♥