For today we had planned a car tour over the island of Babeldaob to rattle off the main sights of the largest island of Palau.

Our car rental for a day in Palau

Through our Hotel Palau Royal Resort we were able to choose a cheap car rental for 24 hours directly from several suppliers. In the end, all the suppliers are quite similar in terms of prices and choices and we ultimately chose a Nissan Primera from Omilar Car Sales & Retal. The 50 US dollar rental fees even included that the car was taken directly to the hotel and also picked up again. Perfect service, then.

Our route across the island of Babeldaob

In the car there was a cast and clear map, in which also the most important sights of the island were drawn and described. Now the discovery tour could start. We have received as a hint to take enough drink and food with us before the start of the tour. On the route itself you will not find supermarkets or petrol stations! A good developed ring road with some junctions leads over the whole island, so that you can’t really get along. In the meantime, we managed somehow, because the signage is not always completely clear 😉 The following route we have planned:

The National Capitol in Melekeok

Our first stop was the National Capitol in Palau’s capital Melekeok, which is located in the very east of the island. When Melekeok replaced Koror as the capital of Palau in October 2006, a whole complex of government buildings was built here on a green hill, including the parliament, the executive (government, public administration) and the judiciary (judicial). The building complex has been very visible from a distance. Strangely, there were hardly any tourists here when we arrived, so that we could move around the grounds undisturbed and also take a small look into the parliament building.

The stone monoliths in Badrulchau

The journey continued to the far north of the island to the Badrulchau Stein-Monoliths, which are Palau’s largest and perhaps oldest megalithic site. When we arrived, we were a bit surprised, because here too we were the only visitors. The parking lot in the front row was therefore secured. Right next to the parking lot was a small cash register where a local woman sat and waited for visitors. Admission costs 5 US dollars for tourists – not exactly cheap for a few stones on a meadow.

The terrain is terraced and in order to get to the actual site, you first have to walk down several stairs. From above you have a beautiful view of the surroundings and can look up to the sea. Once at the bottom you will find a larger meadow surrounded by trees and bushes. And here is also the highlight of the complex: two rows with stone monoliths and a little further down a place with stones that also show faces – some lack the nose, in others it looks as if they are smiling at you. A US researcher has dated the stones to a time of origin around 150 AD. They are said to be the remains of the largest community house in Palaus ever built here.

The sun was insanely oppressive that day, so we quickly took some photos and then ran back to the car.

Another stop on our tour around the island was the Ngardmau waterfall, which is located in the middle of the jungle. To get here, you have three different options from the parking lot:

– You pay 10 US Dollars entrance fee and runs. Sounds simple, but is very sweaty in the heat.
– From the entrance gate, you drive directly to the waterfall with a so-called Mono Rail. This is super relaxed, but also costs 30 US dollars back and forth; One-way, after all, 20 US dollars.
– One “zips” through the surroundings by zip slide (“Zip Line“). There are three different routes, with the most expensive variant you can also get directly from the entrance almost to the waterfall. But the prices here are also fierce: for the cheapest and shortest version you pay 30 US dollars, for the most expensive and longest route 80 US dollars.

We have (as probably almost all) opted for classic running. The Monorail or Zip Line also somehow looked as if they had not been used for a while 😉

First we went through the jungle, then on a dusty path in the blazing sun and then in the middle of a river. The last meters were in the cooler forest again, before we arrived at the waterfall after a total of about 30 minutes. On the way out, some people escaped, but at the waterfall itself there was no one – really great. So first shoes off and off into the cool water. That did really well. The way uphill back to the parking lot was all the more arduous – but if you take a little drinking and breather from time to time, it’s actually possible. So take enough drinks with you! 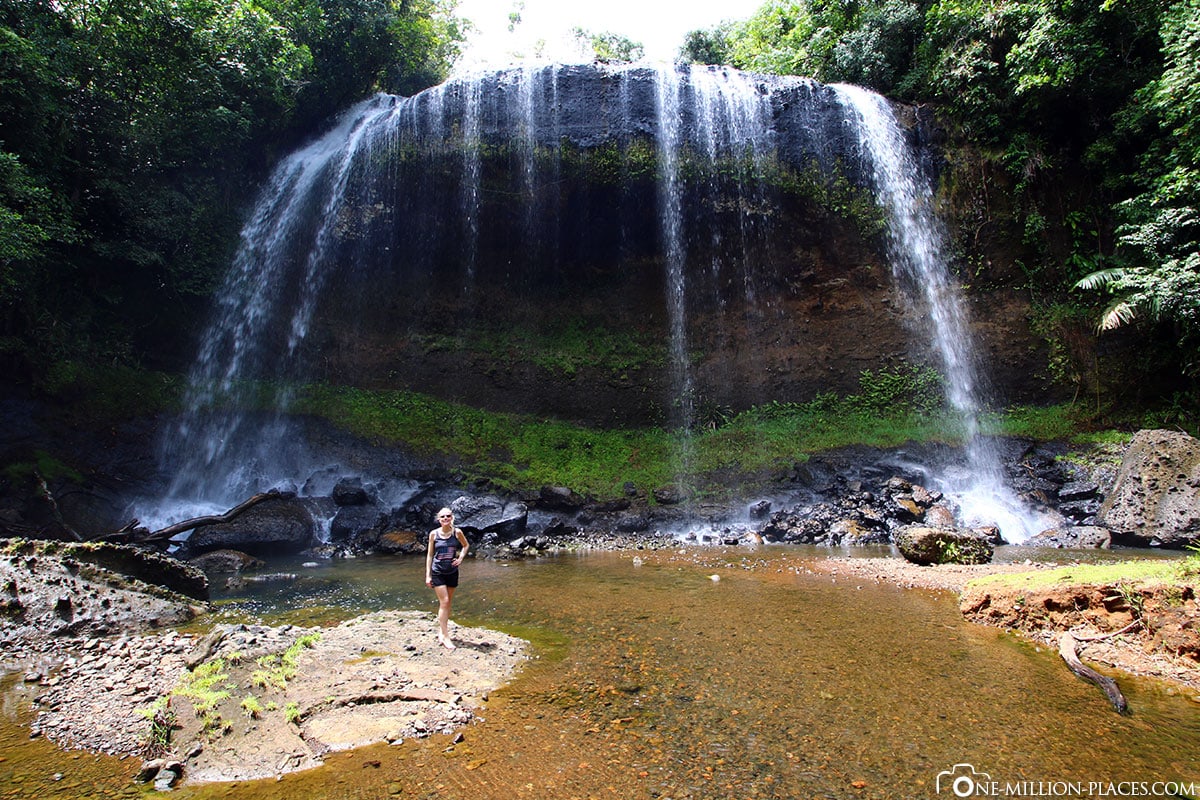 On the way back to the hotel we had to stop in Koror – the largest city of Palau – to fill the car. In total, we’ve spent a total of $15 on gasoline for the round trip. Since there are also two larger supermarkets in Koror (WCTC Shopping Center and directly opposite the Surangel’s Supercenter), we have once again equipped ourselves with drinks & snacks. Strangely enough, here on Palau all sorts of (brand) soft drinks like Coca Cola or Pepsi are actually only available in cans. The price per can is usually ‘0.75, which is really ok. Otherwise, the two supermarkets were really well equipped – depending on what you need. It was always enough for biscuits, chips and drinks 🙂 We didn’t have a cooking opportunity in the hotel anyway, so the standard foods were rather uninteresting for us. But what can be said: The price level for food is of course higher here than in Germany due to the remoteness of the island, although there are also things that cost even less here than here!

In Koror we were also a few times dinners, for example in a local burger restaurant or at a Thai restaurant. But we really enjoyed Kramer’s Bar & Restaurant, which is just a few minutes’ walk from our Hotel Palau Royal Resort. You can sit on the veranda, just look at the harbour and enjoy the really delicious food at reasonable prices. Everything is freshly prepared and a cheeseburger with fries costs e.g. $10, which is a really fair price. Whenever we were there, the restaurant was well attended, so we just got a seat on the balcony.