From our last stop in the medieval town of Miltenberg we continued along the Main on our river cruise. We passed the big cities of Frankfurt, Mainz and Wiesbaden and drove from the Main to the Rhine. Here was a beautiful panoramic ride through the Upper Middle Rhine Valley where we could observe beautiful villages, imposing castles and the impressive autumn colouring.

Our boat trip past Frankfurt, Mainz and Wiesbaden

Our journey took us from Miltenberg overnight past Aschaffenburg until we reached Frankfurt at 8 o’clock in the morning. Originally a stop would have been planned here, but since the city is a corona risk area, we have approached an alternative stop in the evening as part of the A-ROSA “Safety First” strategy. To see the Frankfurt skyline from the water early in the morning is absolutely beautiful. Until now, we knew the view either from the opposite bank, one of the many inner-city Main bridges or from a distance from the A5.

After passing the last lock on the Main in Mainz-Kostheim, we went with full force at the Mainspitze to the Rhine. Here we passed Mainz and Wiesbaden until we entered the world heritage “Oberes Mittelrheintal” in Bingen.

The World Heritage Site Upper Middle Rhine Valley, which is located on the border of the two federal states of Rhineland-Palatinate and Hesse, extends up the Rhine in the southeast between Bingen and Rüdesheim and down the Rhine in the northwest to the Lahn estuary in Lahnstein, above Koblenz – on a length of 65 km along the breakthrough valley of the Rhine through the Rheinische Schiefergebirge.

On 27 June 2002, the cultural landscape of the Upper Middle Rhine Valley was added to the UNESCO World Heritage List. In doing so, UNESCO recognized this region as a landscape of great diversity and beauty with a wealth of cultural testimonies and artistic associations. Here you will find beautiful monuments, extensive vineyards, about 60 small towns and the approximately 40 high-altitude castles lined up on rocky outcrops, which were built during the last 1000 years. The epitome of Rhine romanticism ❤ 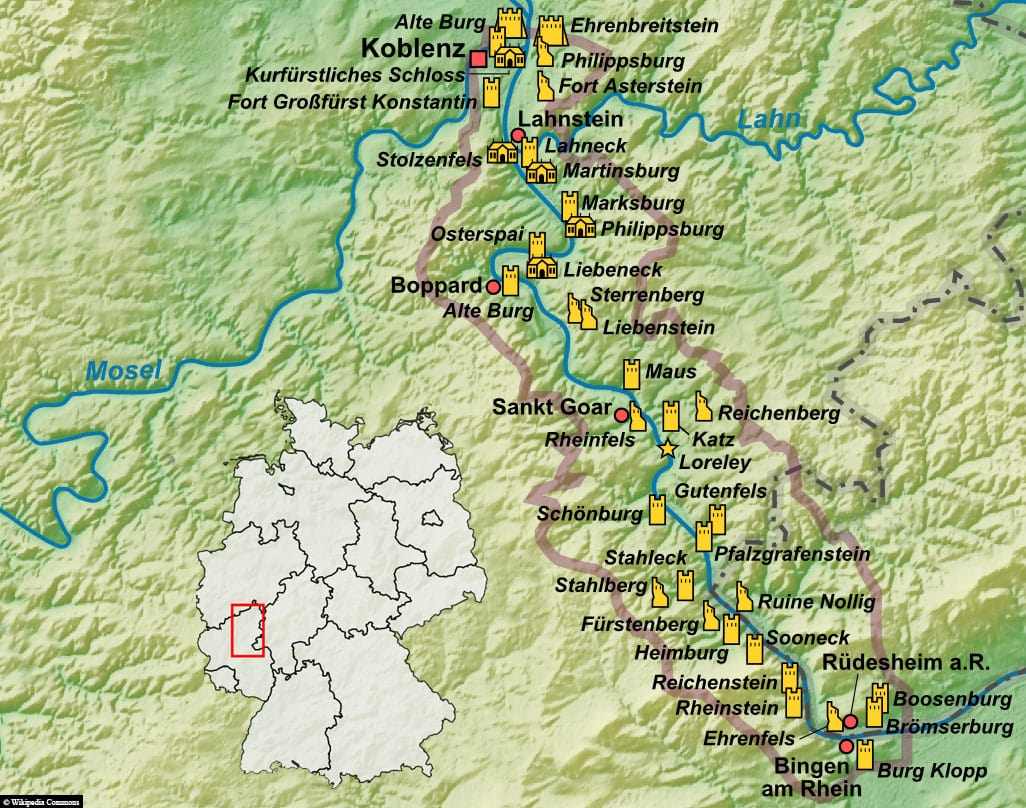 A cruise through the World Heritage Upper Middle Rhine Valley

The Binger Gate covers the area from Bingen and Rüdesheim to Trechtingshausen. With a hot tea in hand, we were able to admire the Binger Mausturm, the impressive Niederwalddenkmal as well as the castles Rheinstein, Ehrenfels and Reichenstein from the top deck of the ship. We have already visited this region in early summer as part of a day trip and have looked at the various sights here.

The Bacharacher Valley stretches from Niederheimbach via Lorch, Bacharach and Kaub to above Oberwesel. On this section we were able to discover many castles, such as the castles Of Nollig, Heimburg or Fürstenberg. We particularly liked the castle Pfalzgrafenstein near Kaub, because it was built on a rocky island in the middle of the Rhine and can only be reached and accessible by means of a passenger ferry. The autumnal foliage, which has been particularly beautifully lit on the many steep (wine) slopes, has perfectly complemented the dreamlike scenery.

St. Goarer Valley with the Loreley

The St. Goarer valley covers the Rhine valley from Oberwesel via St. Goar and St. Goarshausen to above Bad Salzig. The heart of this area is the Loreley, a slate rock near St. Goarshausen, which is located on the right bank of the Rhine 132 meters high on the inside of a Rhine curve. With our ship we passed directly below the rock and were able to take a look at it from the frog’s perspective.

The Loreley is surrounded by many legends and myths: the story of the beguiling, dangerous virgin is world-famous. According to legend, she sits singing on the shore and, through her singing and beauty, captivates the boatmen, whereupon they persevere through the dangerous current and the rocky reefs. The matching Loreley statue has been located at the top of the Hafendamm-Mole near St. Goarshausen since 1983.

On the further way we could discover some beautiful castles on the towering steep slopes, such as the castles Katz, Maus and Rheinfels.

The Boppard loops extend from Bad Salzig via Boppard to the valley narrowing above Lahnstein. We were particularly impressed by the Marksburg, a 12th-century high-altitude castle. It is located at an altitude of 160 metres above the Rhine and is considered to be the only medieval high-altitude castle on the Middle Rhine that has never been destroyed.

The Lahnstein Gate covers only the valley of the Rhine Valley in the area of the Lahn estuary in Lahnstein.

In the late afternoon we laid out in Lahnstein. To our surprise, the A-ROSA Aqua, which was also on the Rhine, was already on the pier at Lahnstein. A beautiful meeting of sisters in Lahnstein 😊 From our berth on the Rhine promenade we could easily and quickly explore the town on foot and on our own.

Lahnstein lies at the confluence of the Lahn and Rhine rivers, on the borders with Westerwald and Taunus. The history of the city goes back to the beginnings of the settlement of the Rhine Valley.

In 1324, Lahnstein was granted town rights and construction of the city fortifications began. Some parts of the old city fortification can still be seen today, such as the 26-metre-high witch tower on Salhofplatz,which stands in the middle of a 97-metre-long preserved piece of the old city wall. In addition, in the Hintermauergasse there is a city wall housebuilt around 1700 , which once served as a hostel for night watchmen and is now part of the city museum.

Worth seeing is the Castle Martinsburg, which was built at the end of the 13th century as a base for the exercise of Mainz customs rights on the Rhine. The castle, which is now privately owned, has apartments, offices, a museum of fasting and a mint.

Since we unfortunately only laid out in Lahnstein in the late afternoon and we did not have much time until nightfall, we could not visit the castle Lahneck. Built in 1226, the castle is situated on a steeply protruding 164-metre-high spur of rock above the city. At sunset we reached the last point of our small sightseeing tour through Lahnstein: the historic inn on the Lahn. The beautiful three-storey half-timbered building is idyllically located on the Lahn and offers local food, which Goethe has already tried here.