The World Heritage city of Bamberg was the second stop of our week-long river cruise with A-ROSA Silva, which took us from Nuremberg to Bamberg, on to Volkach and Miltenberg through the Upper Middle Rhine Valley to Lahnstein, Koblenz and Cologne. We were already looking forward to this stop, because we wanted to see the famous Bamberg town hall live for a long time. In total, we had a day to explore the city’s most famous sights and photo spots on our own.

Bamberg is the largest city in Upper Franconia in the state of Bavaria and has about 78,000 inhabitants. The city is located on the rivers Regnitz and Main and was built as “the Frankish Rome” on seven hills. Bamberg was first mentioned in 902; In 1007, the diocese was founded by King Henry II.

The venerable imperial and episcopal city is also known beyond the borders for one of the largest largely intact historical city centres in Germany. For this reason, the old town of Bamberg has been listed as a World Heritage Site by UNESCO since 1993. It represents in a unique way the Central European city developed on an early medieval basic structure. In addition, three early medieval manuscripts were included in the UNESCO World Documentary Heritage in 2003 and 2013: the Bamberg Apocalypse, a commentary on the High Song and the Book of Daniel, and the Lorsch Pharmacopoeia from the former cathedral library, written at the beginning of the 9th century.

The pier for the river cruises in Bamberg is unfortunately a bit away from the city centre. On foot you walk about 30 minutes (directions in Google Maps) to the Old Town Hall. The A-ROSA harbour guide of Bamberg can be downloaded here as a .pdf version.

The sights in the old town of Bamberg

The most important monuments and sights in the city can be easily explored on foot and on your own, as everything is relatively close to each other. The old town of Bamberg consists of the three historical districts: Gärtnerstadt (e.g. winegrowers’ and gardeners’ houses, gardeners’ and bakers’ houses), island town (e.g. town hall, Little Venice) and the mountain town (Bamberg Cathedral, Hofhaltung and Neue Residenz).

One of the most important sights of Bamberg is the historic town hall. Legend has it that the Bishop of Bamberg did not want to give his inhabitants a place for the construction of a town hall. As a result, wooden piles were cut into the Regnitz and an artificial island was created on which the town hall was built. In documents, the town hall was first mentioned in 1387 and rebuilt between 1461 and 1467 under Gothic influence. In the 18th century, the town hall was redesigned by a Baroque and Rococo architect. The building is decorated with illusion paintings, allegorical scenes and architectural details, as well as frescoes and small figure elements. For example, the leg of one of the putts protrudes out of the wall frescoes as a sculpture. Today, the Old Town Hall houses the representative Rococo Hall and the largest private porcelain collection in Europe (“Collection Ludwig”). 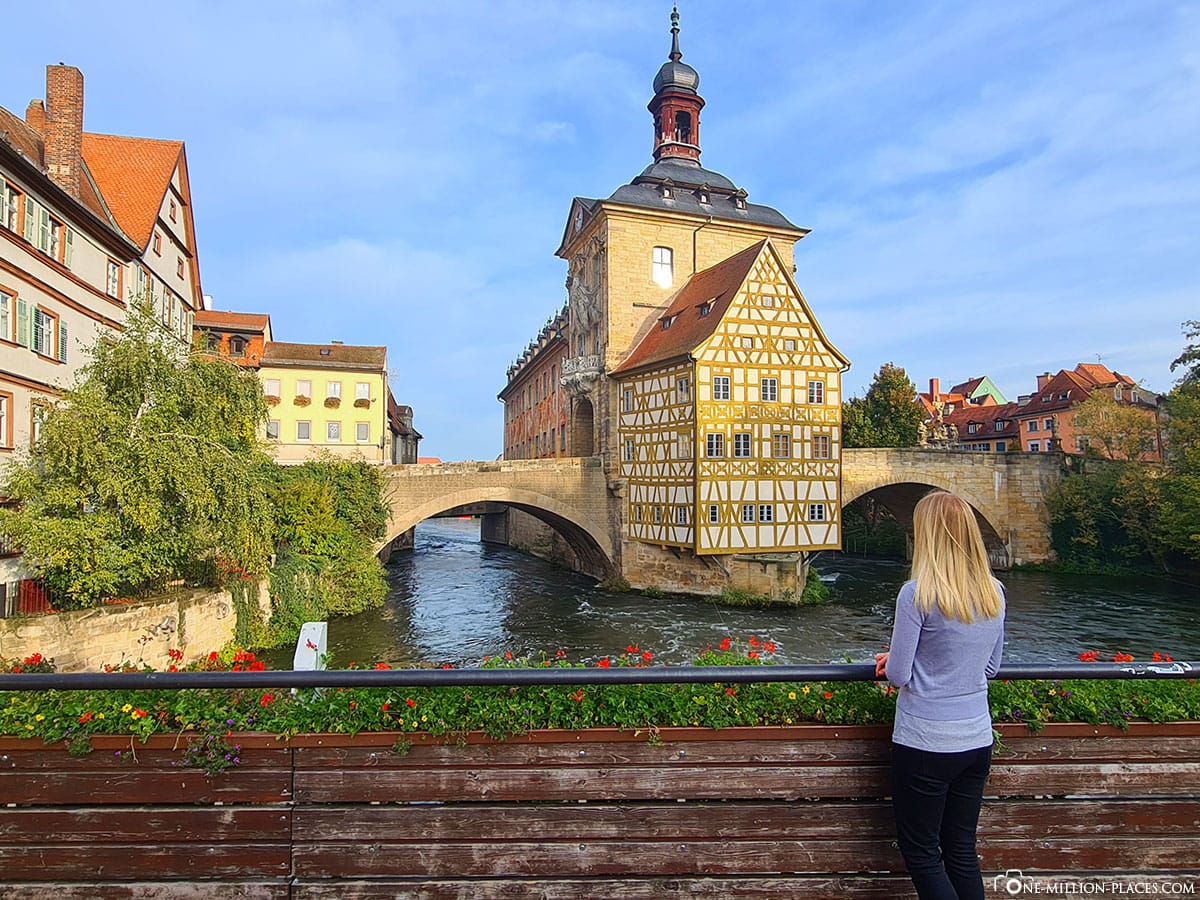 The Old Town Hall in Bamberg

At the crane & the district “Little Venice”

On the left side of the river, the former fishing village “Little Venice” in the Bamberg island town extends. From the opposite bank of the river you can take very nice photos of the densely packed, medieval half-timbered houses with their small gardens and boat moorings.

In the immediate vicinity of the Regnitzufer are two iron cranes,which date back to the time when the port of Bamberg was located here at the beginning of the 20th century. The issuing of the stacking law in 1156 required perenning merchants to unload their goods here and offer them for sale to local citizens for three days. The crane was the interface between water and land: here the goods were unloaded and transported by the citizens by land.

On a stroll along the banks of the left Regnitzarm we passed the beautiful baroque Villa Concordia, which was built at the beginning of the 18th century. Today, the villa is home to the International Artists’ House, which was founded in 1997 and is operated on behalf of the Free State of Bavaria. The buildings house artists and scholarship holders of visual arts, literature and music, who have the opportunity to work on their own projects without any obligation and to present them to an audience in events if desired.

Only a few meters away is the lock 100, which is the last lock of the old Ludwig-Main-Danube Canal, built under King Ludwig I from 1836 to 1845. The lock is still in operation for pleasure boats and canoes and must be operated by hand. It also supports the regulation of the water level in the left Regnitz arm.

The cathedral with the Bamberg rider

The present cathedral dates back to 1237 and is already the third cathedral building, because the two previous houses of worship burned down. Worth seeing inside are the stone equestrian statue “Bamberger Reiter”, which is considered one of the most famous landmarks of the city of Bamberg, as well as with the tomb of Pope Clement II the only pope’s tomb in Germany.

Right next to the cathedral is the Old Court,which once served as the residence of the bishops. Through the “Beautiful Gate” you enter the romantic courtyard, lined with half-timbered buildings, which is accessible free of charge. An entrance fee is charged for the Historical Museum, which is located in the Old Court.

The New Residence with the Kaisersaal

Opposite the cathedral and the Old Court, on the other side of the Cathedral Square is the New Residence with more than 40 stately rooms, which include precious stucco ceilings, furniture and carpets of the 17. and 18th century. It served as the residence of the Bamberg prince-bishops from 1602 and now houses the State Library and the State Gallery of Bamberg. We were particularly impressed by the magnificent Kaisersaal, which contains 16 larger-than-life portraits of German emperors.

In the inner courtyard of the New Residence is the Rose Garden, from which you have a beautiful view over the old town of Bamberg.

During a stroll through the old town of Bamberg we were able to discover many other beautiful buildings, such as the historic brewery restaurant Schlenkerla, which was first mentioned in 1405 and is the most famous smoked beer brewery in Germany. What impressed us very much: In the largest intact old town ensemble in Europe there are about 2,400 listed houses with many ornaments, decorations and impressive facade details.

From a distance we could see the monastery of Michaelsberg, a former Benedictine abbey from the 11th century, which is located on a hill opposite the Domberg. Unfortunately, the monastery was fully equipped, so we decided not to visit it.

A map with all the sights in Bamberg

On the following Google MyMaps map we have drawn all important sights and photo spots in Bamberg.