The town of Miltenberg was the fourth stop of our week-long river cruise with A-ROSA Silva, which took us from Nuremberg to Bamberg, on to Volkach and Miltenberg through the Upper Middle Rhine Valley to Lahnstein, Koblenz and Cologne. Originally we should have docked in Wertheim. However, since the city was declared an inner German risk area on the same day – just before we wanted to invest – because of Corona, we started an alternative stop as part of the A-ROSA “Safety First” strategy.

A cruise on the Main in Lower Franconia

On our way from Volkach to Miltenberg we could see many beautiful villages that are located directly on the Main, such as Kitzingen or Marktbreit. Since the weather played along well, we sat comfortably with a cup of tea on the upper deck and let the passing landscape work on us. Autumn showed its most beautiful side during our river cruise and the autumn foliage was uniquely beautiful. On the way we also passed one or the other lock. After all, a total of 41 locks will pass through the 630 km long route from Nuremberg to Cologne.

By the way, many locks on the Main are only 12 meters wide (see Wikipedia). Our river cruise ship, the A-ROSA Silva, has a width of 11.40 meters. So there is not much space left here and the captain must already have a certain sensitivity when manoeuvring 🙂 We once made a time-lapse video of a lock trip. You can watch this here. 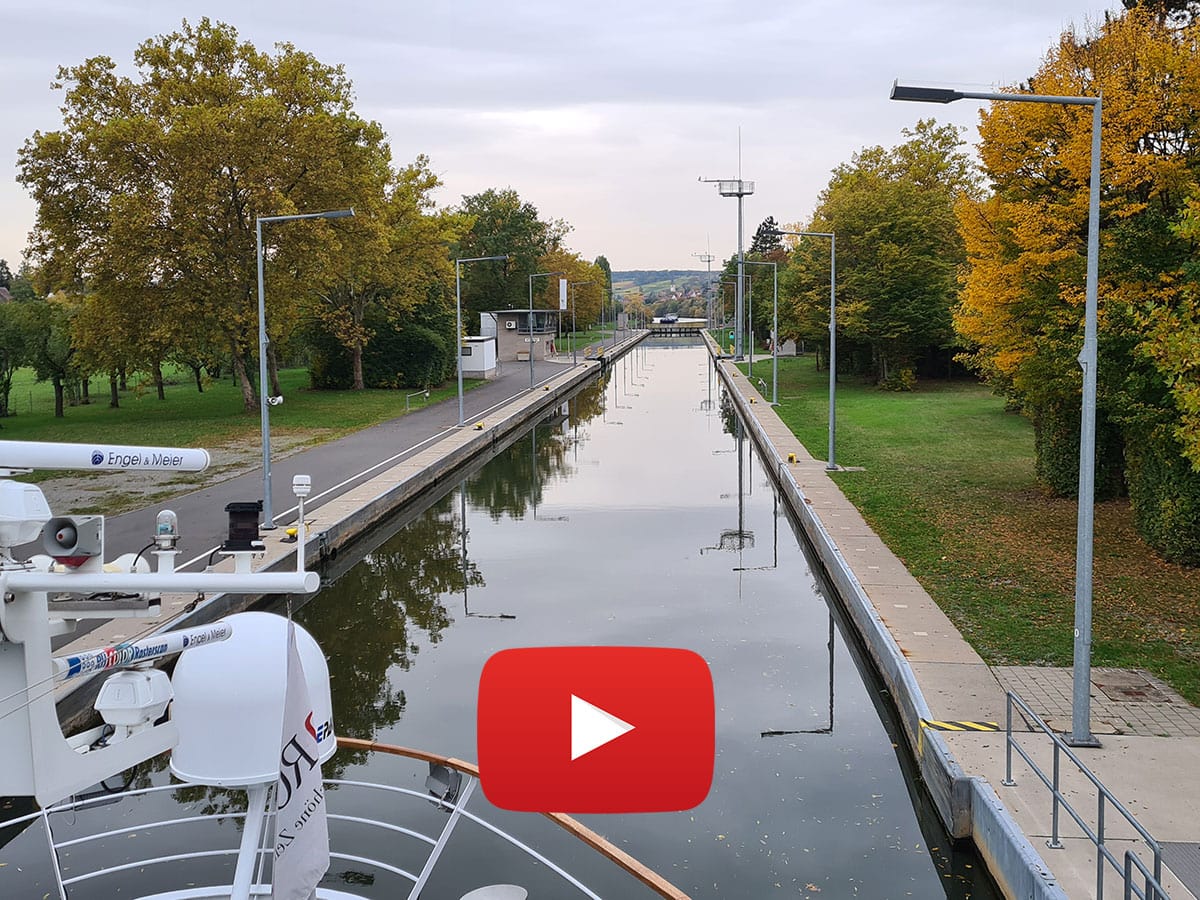 Time lapse of a lock on the Main

Things to know about Miltenberg

The historical Miltenberg, first mentioned in 1237, is picturesquely embedded on the left knee of the Main quadrangle between the hills of Spessart and Odenwald. Due to its proximity to Frankfurt (75 km), Aschaffenburg (38 km), Würzburg (75 km) and Darmstadt (63 km), numerous visitors flock to Miltenberg, especially on weekends and public holidays. Visitors are attracted by the medieval half-timbered houses, the well-known Schnatterloch and the Mildenburg, which towers over the city.

Miltenberg is located on the Deutsche Fachwerkstraße, which combines unique landscapes, historic locations and lovingly restored monuments over a length of around 3,500 km.

With our A-ROSA Silva we have laid out directly on the city side of Miltenberg between the Main and Martins bridges. From here it was a stone’s throw to the Würzburg Gate and the Old Town.

The sights in Miltenberg

From the pier we were able to explore the city on foot and on our own. Equipped with a city map, which we had previously received on the ship, we started our city tour.

The first town fortification of Miltenberg dates back to the 13th century and at that time consisted of two city rings. The later, second city wall originally had 50 towers and gates, of which almost a third of which are still preserved today. The present outer city boundary of Miltenberg is on the one hand the Würzburg Gate in the east of the city and on the other hand the Mainz Gate in the west. Both gates were first mentioned in 1379 and until the 18th century there were still gatekeepers here, who were responsible for the entrance to the city as well as the paving customs. Above the old town, along the castle path, there are still many preserved parts of the old city wall with defensive passages, arches and towers.

The Schnatterloch – Around the Old Market Square

In the centre of the city is the historic marketplace, also known as the “Schnatterloch” and surrounded by many beautiful half-timbered houses. In the original sense, the “Schnatterloch” is a gorge-like drainage ditch that led to the Main. The term “Schnatter” derives from the medieval word “snade” (snow or border), because the rainwater moat was originally the city boundary. In the middle of the market is the red sandstone market fountain, built in 1583 by a sculptor. At the end of the square is the Schnatterlochturm in a southerly direction.

Right next to the market square is the church of St. James, the Catholic parish church of Miltenberg. The church has existed since the 13th century, but over the centuries it has often been rebuilt and expanded. Particularly striking are the classicist towers from 1830, which still play a decisive role in shaping the cityscape to this day. In addition to the Church of St. James, there are other churches in Miltenberg, such as the Franciscan Church on Engelplatz, the Evangelical St. John’s Church and the St. Lawrence’s Chapel with the adjacent St. Lawrence Cemetery.

The Black Quarter – the oldest part of Miltenberg

To the west of the market square, the main street runs through the Schwarzviertel, the oldest part of Miltenberg, where there are many beautiful half-timbered houses, quaint restaurants and small shops. The name of the district originated from the fact that the adjacent Greinberg casts its shadow over the district and so in the winter months hardly the sun shines into the alley. In fact, we had the impression ourselves that it is rather humid and cold in this area.

High above the city is the Mildenburg, which can be reached very easily on foot from the historic market square. The castle, built by the Archbishops of Mainz at the end of the 12th century, was used to secure the position of power and to establish a customs office. The Mildenburg has a varied history of expansion, conquest, destruction, reconstruction and multiple changes of ownership. Today, the Castle Museum presents both ancient art (16th to 19th centuries) and contemporary art (20th and 21st century).

We found the view from the castle, which offers a fantastic view over the Main Valley and Miltenberg, particularly beautiful.

A walk on the banks of the Main

From the Main Bridge you have a very nice view of the main bank, the old town of Miltenberg behind it and the Mildenburg, which towers high above the city. During a walk on the banks of the Main we could find a nice place, where we took a short sightseeing break and let our view over the Main wander.

More sights & photo spots in the old town of Miltenberg

From the market square we walked along the beautiful, cobbled streets of the old town and passed the old town hall. In addition to its function as a city scale, it used in previous years as a dance and council hall as well as a department store and warehouse, where the merchants passing through had to offer their goods for sale. Today, the Civic Hall is available for events of all kinds.

Another very interesting building is the Alte Domkellerei in the main street. The building with the picturesque stair gable was built in 1488/89 and used to serve as the administrative centre of the Mainz Cathedral Chapter. Today, the building houses the municipal music school.

On the fork main road/giant alley is the picturesque inn and hotel “Zum Riesen” from the 12th century. An inscription on the beautifully decorated facade has revealed to us that this inn is the oldest inn in Germany. After researching a little in the aftermath, we found out that the title “Oldest Inn of Germany” actually claimed two other inns in Germany: the “Herberge zum Löwen” in the Black Forest and the inn “Zum Roten Bären” in Freiburg im Breisgau.

A map with all sights in Miltenberg

On the following Google MyMaps map we have drawn all important sights and photo spots in Miltenberg.