Today we literally went to THE Hot Spot on Big Island: The Hawaii Volcanoes National Park, which was founded in 1916. The park has been declared an International Biosphere Reserve and has been a UNESCO World Heritage Sitesince 1987. The 1,348 km2 area of the park includes extensive lava fields from various episodes and is home to the active volcanoes Kilauea and Mauna Loa.

We were already on our last visit to Big Island (2015) here in the national park, but of course we wanted to look at everything again.

The Hawai’i Volcanoes National Park is open 24 hours a year round, so you can go in and out at any time. At the entrance gate you have to buy a ticket for access to the national park. For example, for a car including all passengers, you pay 25 US dollars for a week. Knowing that we were going to Go to Haleacala National Park on Maui, we decided to buy a Hawai’i TriPark Annual Pass. It costs USD 30 per car and is valid for one year for both national parks, as well as the Pu’uhonua o Honaunau National Historical Park, which is also located on Big Island. So if you want to visit at least 2 of the 3 national parks, the pass is always worth it. 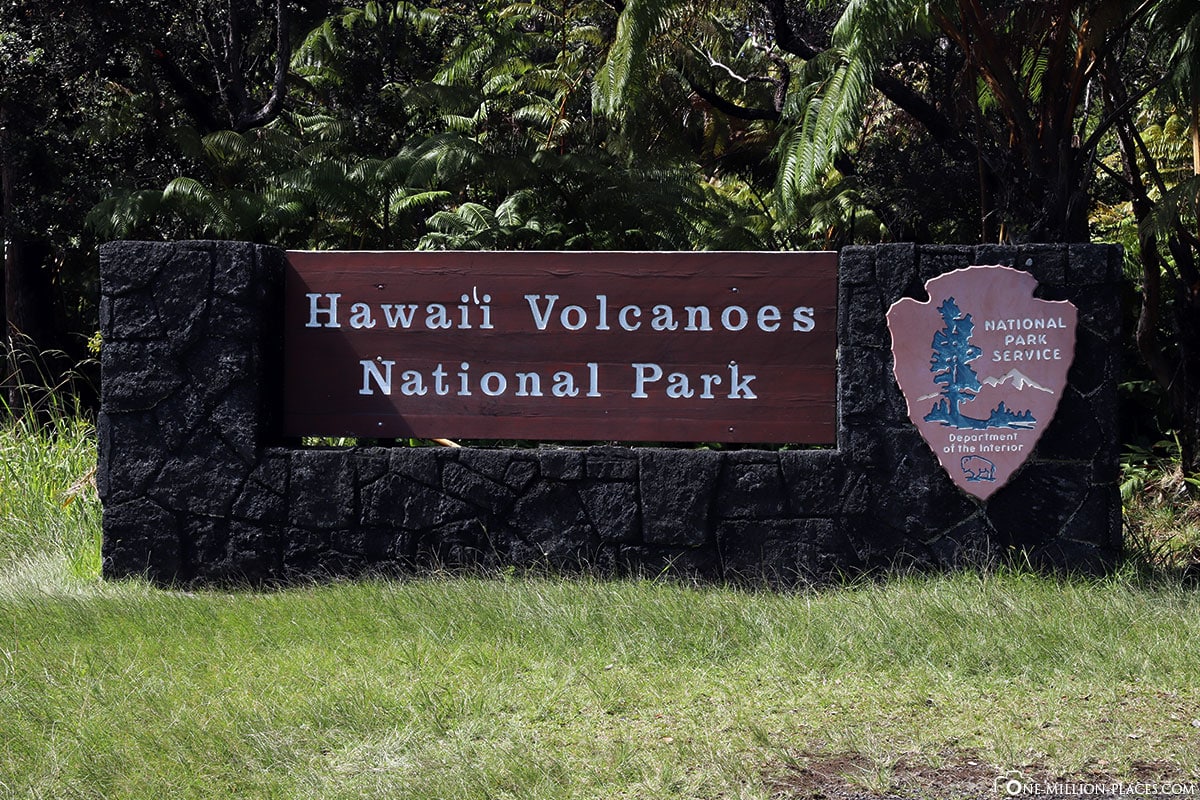 A very good large map of hawaii Volcanoes National Park is available for download here as a .pdf file.

The first point of contact for the many park visitors is usually the Kilauea Visitor Center, which is located near the park entrance. The visitor centre provides a good overview of the ecological, historical and cultural features of the park. The park rangers also provide valuable information about current eruptions, tips for hiking trails and other activities in the park. There is also an auditorium where a film about the various eruptions is shown at regular intervals. We have also looked at it and find it highly recommended. This gives you a first impression of how active the ground is here under your own feet.

Just to the left of the Kilauea Visitor Center, the Sulphur Banks Trailbegins, a 1.5-kilometer-long, easy hiking trail. This volcanic thermal area is the leading promenade path, from which you can see the steaming soils and coloured mineral deposits. The volcanic gases are rich in carbon dioxide, sulphur dioxide and hydrogen sulphide, so it can smell like rotten eggs. Only helps: nose to and through 😉

The Thomas A. Jaggar Museum

Another visitor centre in the park is the Thomas A. Jaggar Museum. If you drive from the Kilauea Visitor Center there it is about 2.5 miles. On the way you can make a nice stop at the Steam Vents. The groundwater seeps into this area up to the hot volcanic rocks and returns to the surface as steam.

A few minutes further you will come to the Jaggar Museum, which at the same time forms the end of the road in this direction. The museum is a museum of volcanology, where there are various geological and cultural exhibits: from pictures to displays, real-time monitors to seismographs, you will find plenty here to find detailed information about the history of this area.

Halema’uma’u Crater in the Kolauea Volcano

From the outdoor terrace you have a breathtaking panoramic view of kilauea caldera, one of the most active volcanoes in the world. From here you can see the ongoing gas eruption of the Halema’uma’u crater.

What can only be seen as steam during the day…

The huge caldera of the Kolauea volcano

… is particularly spectacular on a starry night. Then you can see the red glow of the hot lava in the lava lake. In order to be able to photograph the lava glow optimally at night, it is definitely recommended to bring a tripod. And warm stuff 😉 Otherwise you don’t last long outside … 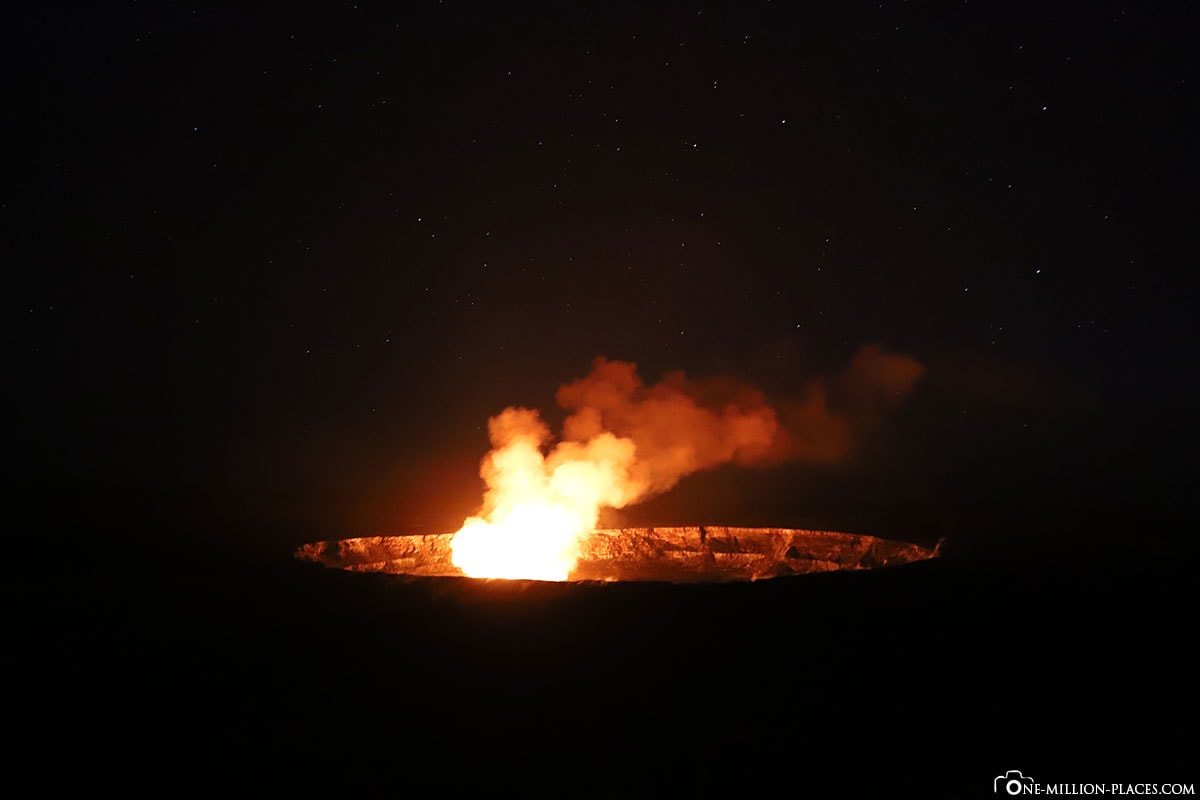 Our next stop in the national park was the Thurston Lava Tube, a 550-year-old lava tunnel. Yes, here really hot lava has flowed through. Hard to imagine. The tunnel was discovered by Lorrin Thurston in 1913 and still bears the name of its explorer. From the parking lot above, it is a short walk through a lush rainforest to the entrance of the tube. The lava tunnel is illuminated and walkable. It took us no more than 20 minutes to complete the circuit.

On our boat trip to Ocean Entry, we saw what a lava tube looks like when it arrives at the sea.

Not far from the Thurston Lava Tube is the Kilauea Iki Crater Overlook. It is best to leave the car in the parking lot at the Thurston Lava Tube and hike on the edge of Kilauea Iki Crater to the actual viewpoint. On the hike you already have a beautiful view down into the crater. On our world tour we have been here before and have also gone down the 120 meters of altitude into the crater. It is quite impressive when you stand in the huge crater below and realize that here you are wandering over the still steaming surface of a cooling lava lake.

The Chain of Craters Road

The 30-kilometre Chain of Craters Road leads 1,130 metres down to the coast. The road was completed in 1928 and impresses with its views of the various lava fields. Since 1986, the lava has flowed repeatedly over the road or Highway 130 and has buried about 16 kilometers of the road under it to this day.

If you drive to the end of Chain of Craters Road, you can park your car and then walk down to the cliffs. From here you have a beautiful view of the Holei Sea Arch, an 18 meter high surf gate. It was once formed by wave erosion and will unfortunately collapse at some point.

But what you can see down here at the end of the road are the Hawaiian geese or also called N’n’. The geese are considered very endangered here and are therefore strongly protected. You can’t get past the many signs that stand at the side of the road anyway 😉