Things to know about Stralsund

The Hanseatic city of Stralsund was founded in 1234 and today has about 60,000 inhabitants. As a founding member of the Hanseatic League, the city was prospered through international trade. In particular, the old town offers a historical variety of buildings with numerous former merchant houses, churches, alleys and squares. Of more than 800 listed houses in Stralsund, more than 500 stand as a single monument in the old town. The old town counts as a valuable testimony of the brick Gothic since 2002 with the title “Old Towns of Stralsund and Wismar” as a UNESCO World Heritage Site.

The Hanseatic city of Stralsund on the Baltic Sea

During our walk through the historic old town of Stralsund we could see numerous historic buildings and listed buildings. Many of the buildings were threatened with decay in GDR times, because the historical building substance was not appreciated. It was only since 1990 that large parts of the historic old town have been renovated with private and public funds. Therefore, in the streets of the old town you will find numerous elaborately renovated townhouses with their characteristic gables from the Gothic period.

Around the Old Market

The Old Market is the centre of the historic old town. The most prominent building on the square is THE landmark of Stralsund: the town hall, which was first mentioned in 1271 and is considered one of the most important profane buildings of the North German brick Gothic. Right next to the town hall is the church of St. Nikolai from 1276, which is one of the most beautiful sacral buildings in northern Germany.

Opposite the town hall we discovered the Wulflamhaus, which was built before 1358 and visually has some elements of the town hall. With its four equally high pillars and other architectural details, it is one of the most remarkable medieval gabled houses in the city. Other buildings worth seeing at the Alte Markt are the Artushof, the Swedish-Pomeranian Command House and the Trade Union House. 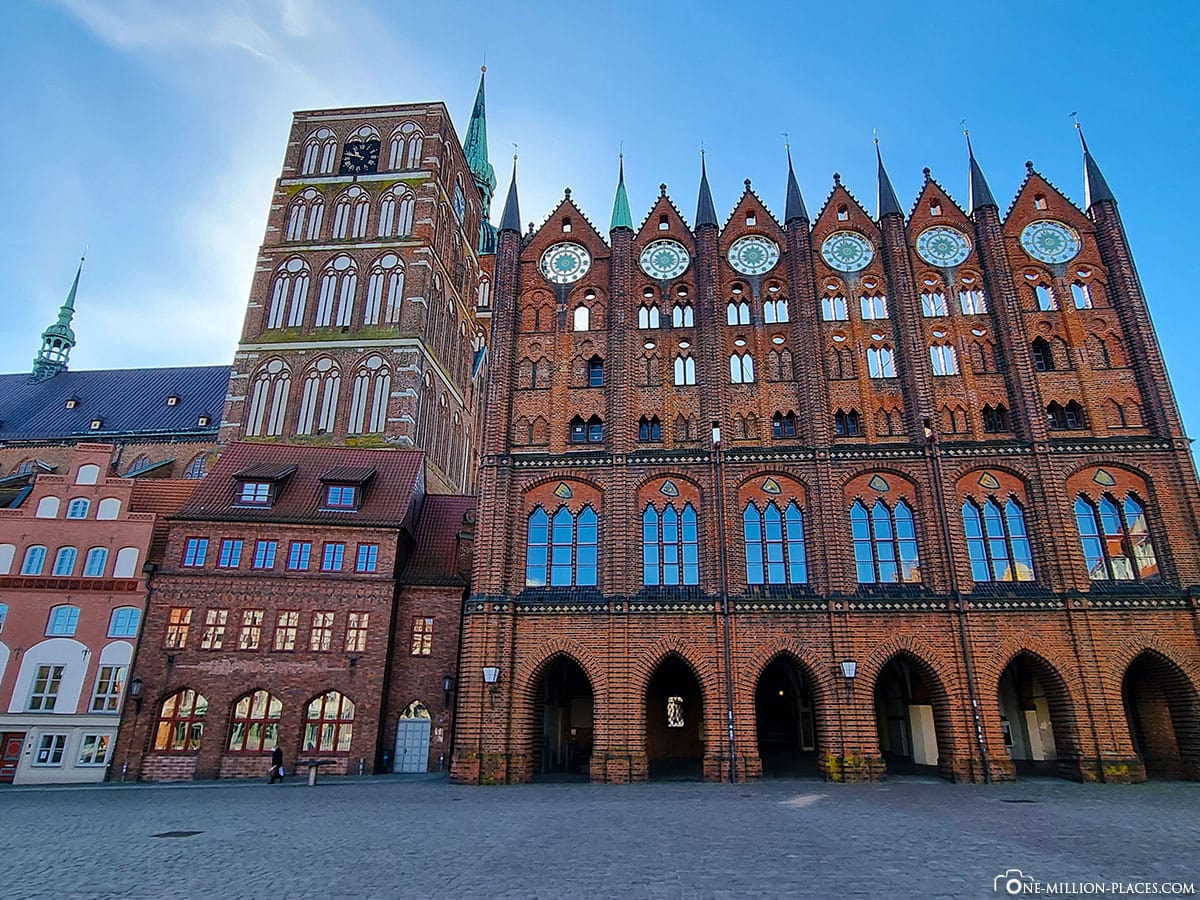 The town hall of the Hanseatic city of Stralsund

The harbour island is located directly on the Strelasund, the body of water that separates the Hanseatic city of Stralsund from the island of Rügen. In addition to some listed buildings, such as the turret store or the pilot’s house, there is above all the Oceaneum, a natural history museum with a focus on the sea. On more than 8,700 m2 of exhibition space, the various aquariums can be used to create different water and life worlds from the Baltic Sea, the North Sea and the North Atlantic.

The former sailing school ship Gorch Fock can also be found on the harbour island. In 2003 it returned to its old home port and can be visited ever since.

On our foray through the old town we were able to discover the other two large brick churches of St. Mary and St. Jakobi, both of which are already visible from afar and together with the church of St. Nikolai characterize the silhouette of the city.

In many streets we walked past numerous colourful gabled houses, which are characteristic of Stralsund. The medieval brick buildings with the pretty gabled facades were once built by wealthy merchants, with whom they demonstrated their wealth and power. Here we lived, represented and traded – all under one roof.

The Monastery of the Holy Spirit is a listed building ensemble and was in fact not a monastery at all, but the oldest hospital in the city, which was first mentioned in 1256. The monastery was subjected to multiple destructions in the following centuries and fell into disrepair. It was not until the 1990s that it was completely restored with the help of the German Foundation for the Protection of Monuments. Today there are apartments in the complex.

A map of Stralsund’s attractions

On the following Google MyMaps map we have mapped the most important sights of the Hanseatic city of Stralsund on the Baltic Sea.

A map of the sights in Stralsund