After a quiet ride along the Seine, our first port on our river cruise with A-ROSA was the small town of Les Andelys, which is 85 kilometers northwest of Paris and 35 kilometers southeast of Rouen.

The cruise on the Seine from Paris to Les Andelys

After we left saint Denis with our ship A-ROSA VIVA, we drove through the greater Paris area for quite some time until we reached more rural areas. When we got up the next morning, we pushed the curtains aside in our cabin to enjoy the view: mirror-smooth water, pure peace, the sun shining and the sky shining deep blue. A better one can not start a morning 🙂

The Seine is one of the longest rivers in France, with a length of 777 kilometres. At the lower reaches of the river in the Normandy area, exceptionally large valley loops, so-called meanders, have formed. Therefore, the ship takes a very long time for the routes from pier to pier, although the places are not so far apart. The example of Saint Denis – Les Andelys shows this quite clearly: it takes about 1-1.5 hours by car, and we sailed for 13 hours by boat. This is due on the one hand to the river loops but of course also to the locks and the very leisurely speed of travel.

After an extensive breakfast we enjoyed the last kilometers of driving from the upper deck before we laid out in Les Andelys. To the right and left of the Seine we have seen wide, hardly built-up landscapes. On the right hand side of the Seine, the Chateau Gaillard, built by Richard the Lionheart, towered above the Seine above Le Petit Andely. We first drove past the village to turn just behind it and moor at the pier next to another ship. During the turning manoeuvre we could see the imposing white chalk cliffs of Le Petit Andely, which are located on the banks of the Seine and stand out very nicely between the lush green of the slopes.

With a small delay, the ship was released at noon so that we could disembark.

You can download the port guide of Les Andelys here as a .pdf version. 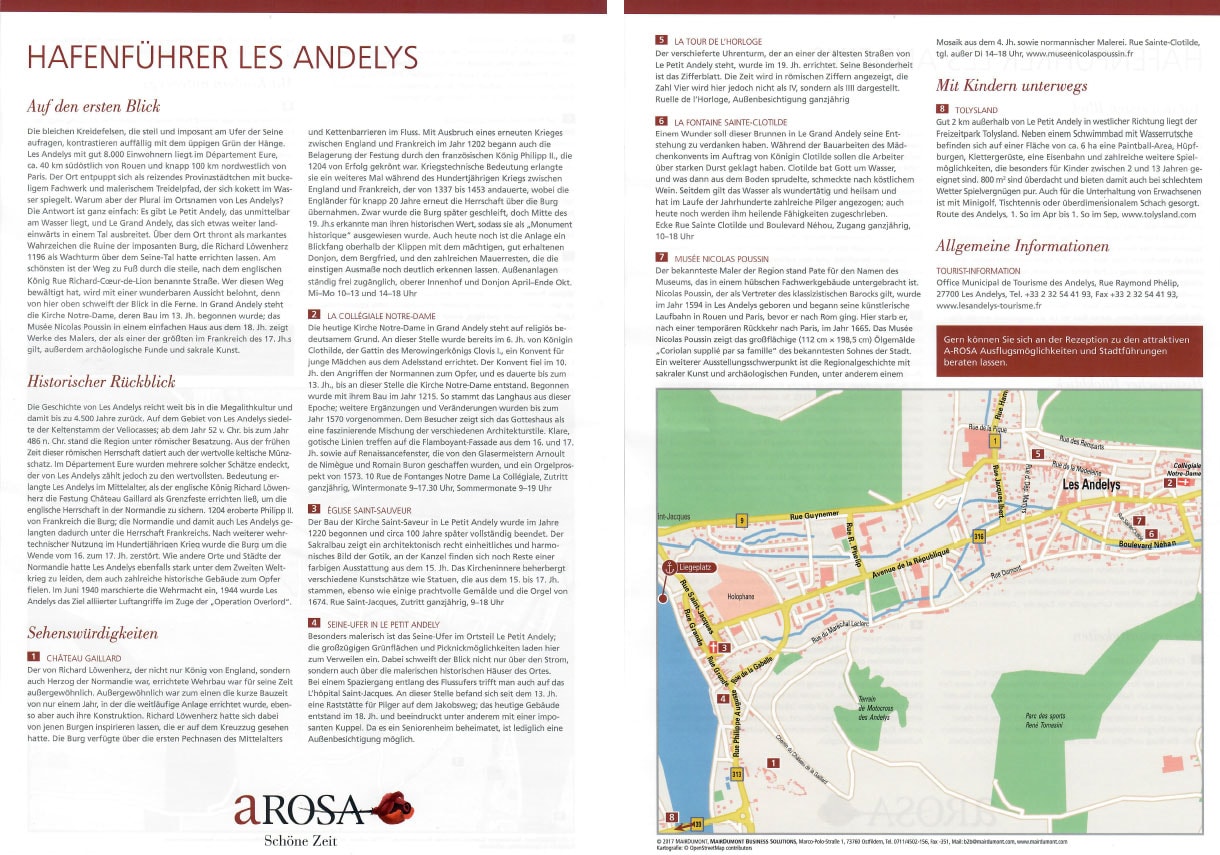 A walk through the municipality of Le Petit Andely

Directly in front of our ship, a small artists’ market was set up on a meadow, where various artists exhibited their works and even painted them live. After looking around here, we walked through the small, dreamy streets of Le Petit Andely. And “Petit” is the place actually – it didn’t take us 20 minutes to look at the church of Saint-Saveur and some half-timbered houses. But that was also a good thing, because we had to get back to the ship quickly, because our excursion with A-ROSA was waiting for us.

A trip to the Chateau de Vascoeuil

A-ROSA offers numerous excursions for your guests: whether you want to do sightseeing, be active in sport or put enjoyment in the foreground.

Through the excursion program of A-ROSA we took part in the 4-hour excursion “Chéteau Vascoeuil” in the afternoon, which is offered in the program for 47 EUR per person. With a coach we went first through Le Grand Andely, where we could see the imposing church of Notre-Dame passing by. Afterwards, the journey led us through the typical Normandy landscape with orange groves and small castles along countless avenues to the Chateau de Vascoeuil. The castle is from the 15th/16th. It now houses a centre for art and history with an exhibition of contemporary works of art and a museum dedicated to Jules Michelet, a French historian from the 19th century, which occasionally stayed in Vascoeuil. In the 5 hectare castle park there is a permanent collection of about 50 sculptures of well-known artists from the 20th century.

The facility was not overcrowded during our visit, so we unpacked our drone in a quiet place at the end of the garden to take some aerial photos of the castle and the complex. At the end of our visit to the castle and park, we ate a delicious ice cream in a café, which is located directly on an artificial water cascade.

When all the guests were back on the bus, we started the return trip to Le Petit Andely. However, we did not go straight back to the ship, but there was still a little highlight waiting for us.

The Chateau Gaillard – The Castle of Richard the Lionheart

By bus we went directly to the Chateau Gaillard, which is a striking landmark above the village of Le Petit Andely directly above the Seine. We were able to get off the bus here, walk ourselves to the castle and from there down to the village. Alternatively, you could have been taken back by bus.

The Chateau Gaillard was built in 1196 by Richard The Lionheart, king of England and Duke of Normandy, as a defensive structure to secure English rule in Normandy. On the one hand, it is worth mentioning the short construction time of the castle of only one year, but also its construction. The Lionheart was inspired by castles he had seen on the crusade. In 1204, The French King Philip II conquered the castle, bringing Normandy under the rule of France. Due to later wars, the castle was destroyed in many places. Today, the former dimensions of the castle can still be clearly seen by means of the remains of the wall and the residential/wehrturm.

We really enjoyed the view from the Chateau Gaillard. From up here you will be rewarded with a great view of the Seine (including our ship), Le Petit Andely and the Norman landscape. What a beautiful end to an eventful day!