With A-ROSA we were already on the road in 2017, at that time we went along the Danube with ROSA BELLA: Vienna, Esztergom, Bratislava, Budapest and the World Heritage Site Wachau were on the agenda. We were incredibly excited to do a river cruise because it’s a slow, very slow trip. We were all the more pleased that we had the opportunity to go on a river cruise again this year. This time we went on the A-ROSA VIVA along the Seine in France 🙂

Our itinerary “Experience Normandy with Paris”

Our river cruise with A-ROSA VIVA took us for 7 days from the metropolis of Paris along the Seine to the highlights of Normandy. The start of the journey is the city of love Paris, further to charming provincial towns such as Les Andelys, an imposing cathedral in Caudebec-en-Caux, the port city of Rouen with countless half-timbered houses and an impressive show of lights in the evening, following in the footsteps of Claude Monet in Vernon until it goes back to the multicultural metropolis of Paris. In between, the Seine winds between wide meadows and forests, apple orchards and castles.

The itinerary of the Seine river cruise with A-ROSA

Getting to the A-ROSA Cruise Ship

We flew from Frankfurt with Lufthansa to Paris Charles-de-Gaulle. After 50 minutes of flight, Paris welcomed us in the most beautiful sunshine – what a great start to the holiday ☼

Since our a-ROSA package already included the transfer from the airport to the ship, we were able to walk directly to the agreed meeting point in Terminal 2D at the airport. But since we landed at another terminal, we had to pick up our luggage and then walk to the right terminal. This took an unbelievable length, because the distances at Paris airport are very long, but we also had to wait 45 minutes for our luggage. Unfortunately, this meant that we missed the first shuttle bus to the ship and had to wait for the next one. On our departure day, the A-ROSA shuttle buses departed at 11am, 1pm and 3.30pm. After the entertainment manager Olaf had welcomed us, we had to wait about 1.5 hours and then – with other guests – we could take the bus at 1 p.m., so we arrived at the ship about 1.30 p.m. Check-in was scheduled for 2 p.m. So we had some time to enjoy our first drink already relaxed on deck until we could move into our cabin.

Unfortunately our ship A-ROSA VIVA was located outside Paris in the neighboring city of Saint Denis. The reason for this is that the ship is too big to pass all the bridges in the city centre of Paris. This is of course a great pity, because such a berth near the Eiffel Tower would of course have been magnificent. 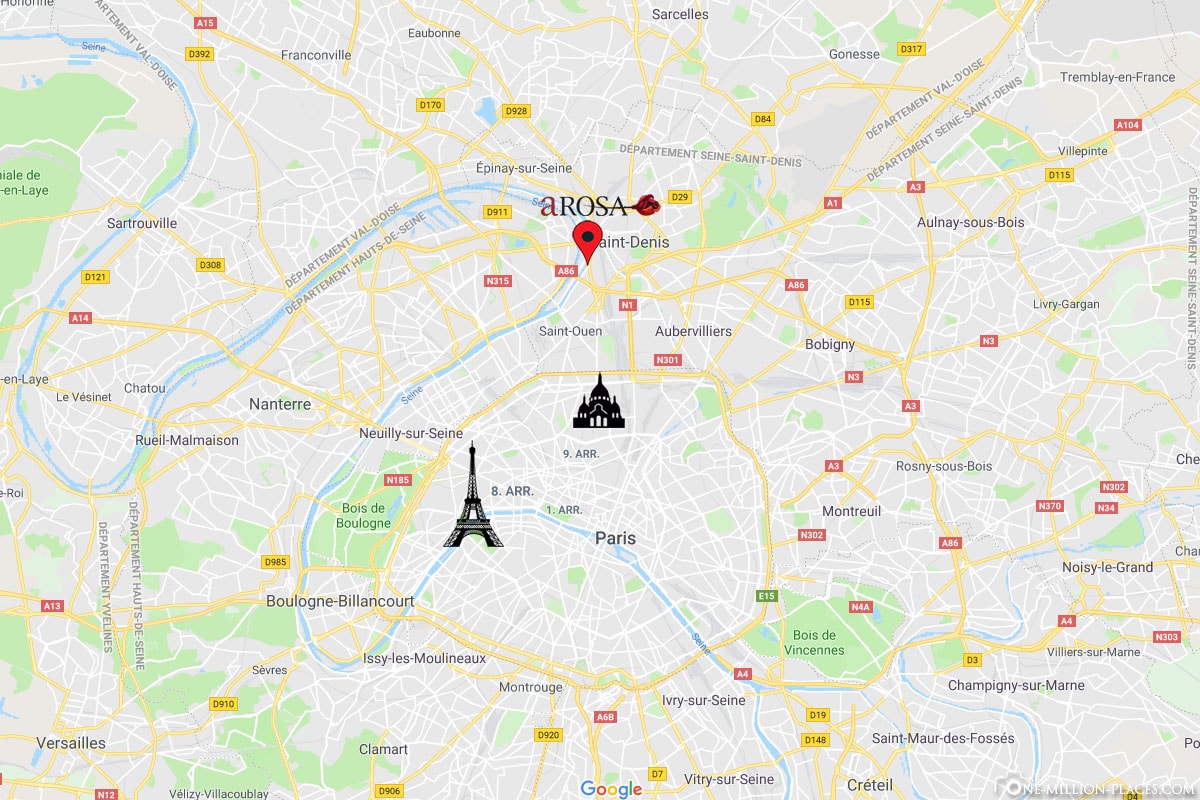 The pier of A-ROSA in Paris

From the berth there is a public transport connection to Paris, but you have to walk about 15 minutes to get to the metro station Carrefour Pleyel (light blue line 13)(directions in Google Maps). We have read many comments in advance which said that Saint Denis is very uncertain. We cannot confirm this, as we have never felt insecure. A-ROSA also recommends using this metro station, so you can use it without hesitation. Of course, one should avoid showing his valuables obviously (e.g. camera around the neck), as in other places in the world also 😉

Things to know about A-ROSA VIVA

The ship A-ROSA VIVA was taken over by the shipping company in 2010 and put into service. A maximum of 202 passengers can be accommodated here, in addition up to 55 crew members are on duty on the ship. The VIVA is 135 meters long and 11.4 meters wide. Initially, the ship was used for river cruises on the Rhine, Moselle and Main – currently the A-ROSA VIVA operates as the only ship of the fleet on the Seine. In addition to the VIVA, there are two identical ships, the AQUA from 2009 and the BRAVA from 2011.

Even if the A-ROSA itself and the cruises with their river cruise ships are German-speaking, on some routes and on selected dates international guests can also be on board. So it was with us – a larger tour group from Spain with its own guide was there as well as a group from Ukraine. In such a case, English-language documents are also available on board, there are also English announcements and international hosts are available for questions.

The deck and cabin plan

The ship has four decks:on the lower 3 decks there are 99 double cabins and on the upper deck there is a spacious sun deck with seating and reclining facilities. 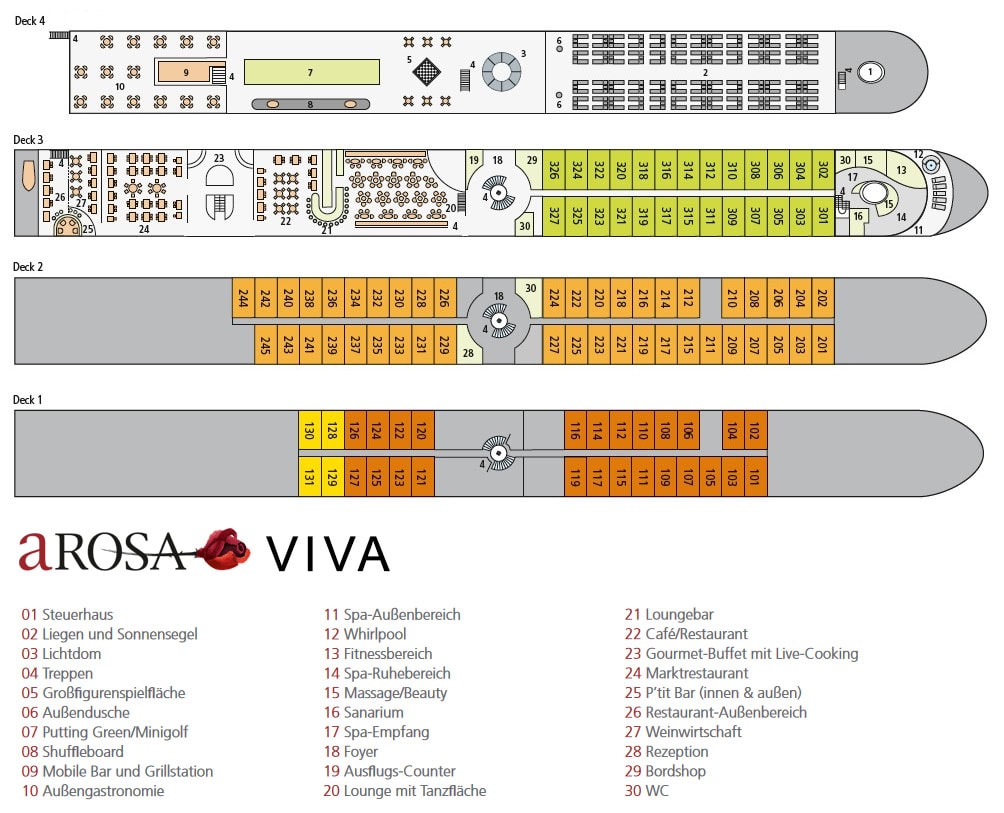 The deck and cabin plan of the A-ROSA VIVA

Our outdoor cabin with French balcony

From home we have already looked at photos of the cabins on the A-ROSA homepage, so that we get an approximate impression of how we will “live” in the one week. We had a 2-bed outdoor cabin with a French category C balcony. Our cabin was 14.5 m2 in size and was on deck 2. On the A-ROSA ships there are by the way only outdoor cabins, i.e. enough daylight is always provided. Compared to the interior cabins of the large ocean cruise ships, this is really a huge advantage 🙂

The furnishing of the cabin was very practical: if you enter the cabin, there is the bathroom on the right or left at the entrance and a spacious wardrobe and a shelf on the other side, on which the flat screen TV has also found its place. By the way, you don’t have to do without the German channels in the case of television. In total, we had two desks in our cabin, which acted as a pure storage area for us. We have stored our suitcase under the bed for the one week without any problems, so that they do not stand in the way.

Every evening, the A-ROSA Journal is located at the cabin door, which provides information about the following day: be it the buffet times, excursion tips or the evening program – nothing escapes here.

The facilities on board

As we sped along the Seine, there were all sorts of ways on board to pass the time. Since the weather was at its best during our trip, we often spent the time during the trip in the fresh air. The sun deck offers the best opportunities to let your gaze wander and take a refreshing drink to see the passing landscape. If you like it more active, you can also play shuffleboard, chess or a game of mini golf on the top deck. Alternatively, the ship’s own gym offers the best conditions to get off to a good start. In the adjacent SPA-ROSA you can relax in the sauna or the outdoor whirlpool. You never get bored on board and before you know it, you’ve already moored at a pier and are ready to explore the surroundings.

On the ship there is a market restaurant (buffet), a wine industry (for exclusive dinners or if there is no more space in the market restaurant) and a bar. In the lounge there was an evening program on some days, through which the entertainment manager led, e.g. music bingo, music quiz, chill out music, performance of a singer duo or a tombola. On some evenings, however, due to the great weather, one could still sit on the upper deck for a long time and watch the Seine being kissed by the setting sun at some point.

The food on board the A-ROSA VIVA

A lot is done on board A-ROSA for the excellent catering of the guests. Our premium all-inclusive fare included all meals and almost all drinks, so we were well catered for. The restaurant on board A-ROSA VIVA offers enough seats for all guests. You have a free choice of seats and also no fixed meal times.

Already in the morning there was already a wide range of cold and hot dishes – from bread, rolls and croissants to scrambled eggs, semolina porridge and bacon to cereals. So nothing stood in the way of a good start to the day 🙂

As a rule, there was dinner from 7 p.m. to 9 p.m. Even though it was only 2 hours to eat 200 guests, we always found a seat and there were never long queues at the buffet. Everything has always been very well distributed. There was an extensive selection of cold and warm appetizers, main courses and desserts. We also found it remarkable that the foods were always labelled, depending on whether lactose, gluten or the like were included. For guests with food intolerances definitely a huge advantage. Water is already available free of charge on the tables; more drinks must be ordered from the waiter. Unfortunately, this sometimes took a little longer (up to 10 minutes). So it’s better to order a drink first and wait until it comes and then get something to eat at the buffet. There are unfortunately no tap stations with drinks in the evening, in the morning already (for example juices and tea).

On our trip there was a special evening with an exclusive dinner “A-ROSA Wine & Dine”, which you could book in addition – at an extra cost of 42 EUR. The exquisite 5-course menu was served in the winery, along with corresponding wines. We already had such a dinner on our trip with the BELLA and can only recommend this to anyone who wants to experience the icing on the cake – apart from the buffet.

It was a pity that compared to the A-ROSA BELLA there was no nice outdoor area directly at the restaurant. This is very small on the VIVA and actually only the smokers met. So if you wanted to sit outside while eating, you had to go up to the sun deck with your plate.

A boat tour with a look behind the scenes

When we were on our way to Rouen, we took part in a boat tour with the hotel manager Balazs Benacs – funnily enough, this was the same hotel manager we had at BELLA two years ago. What a beautiful coincidence! 🙂

The tour offered us a nice opportunity to take a look behind the scenes of A-ROSA VIVA. With a group of about 10 other guests, we went with the hotel manager through the most diverse areas of the ship: be it the ship’s own laundry, the kitchen, the crew area, the machine area or the wheelhouse. We were able to experience very interesting things here that you werenot so aware of before. Did you know, for example, that the wheelhouse can also be retracted during bridge crossings and that the captain then sits in a cavity with the wheelhouse?

A really very exciting one-hour tour, which is recommended to anyone who has always wondered what is going on in the background of a ship.