After we had moved into our cabin on the A-ROSA VIVA at 2 p.m., we didn’t have much time until we dropped off at 9 p.m. But since today was really a beautiful Saturday afternoon with bright sunshine in Paris, we didn’t want to miss the opportunity to at least go back to the city for a short time to take some nice photos of the Eiffel Tower and the Louve ☼

How to get from the A-ROSA pier to downtown Paris?

Unfortunately our ship A-ROSA VIVA was located outside Paris in the neighboring city of Saint Denis. The reason for this is that the ship is too big to pass all the bridges in the city centre of Paris. This is of course a great pity, because such a berth near the Eiffel Tower would of course have been magnificent.

The fastest but also the most expensive way from the pier in Saint Denis to the Eiffel Tower is certainly by taxi. For the 11 kilometers it takes about 30 minutes and according to the taxi calculator Paris has to reckon with costs of about 25 EUR.

From the berth, however, there is also a connection by public transport to the city centre. However, you have to walk about 15 minutes to get to the metro station Carrefour Pleyel (light blue line 13)(directions in Google Maps). We have read many comments in advance which said that Saint Denis is very uncertain. We cannot confirm this, as we have never felt insecure. A-ROSA also recommends using this metro station, so you can use it without hesitation. Of course, one should avoid showing his valuables obviously (e.g. camera around the neck), as in other places in the world also 😉

With the light blue line we went to the metro station “Invalides”, which is practically between the Eiffel Tower and the Louvre. From here it is a walk to the EiffelTum less than 2 kilometers (25 minutes) or 1.8 kilometers to the Louvre (23 minutes). If you don’t want to walk the route, you can of course also change at the station Invalides and continue with the metro for 2 more stops. But we found it quite nice to walk through the small streets of the 7th arrondissement of Paris, the arrondissement du Palais Bourbon. 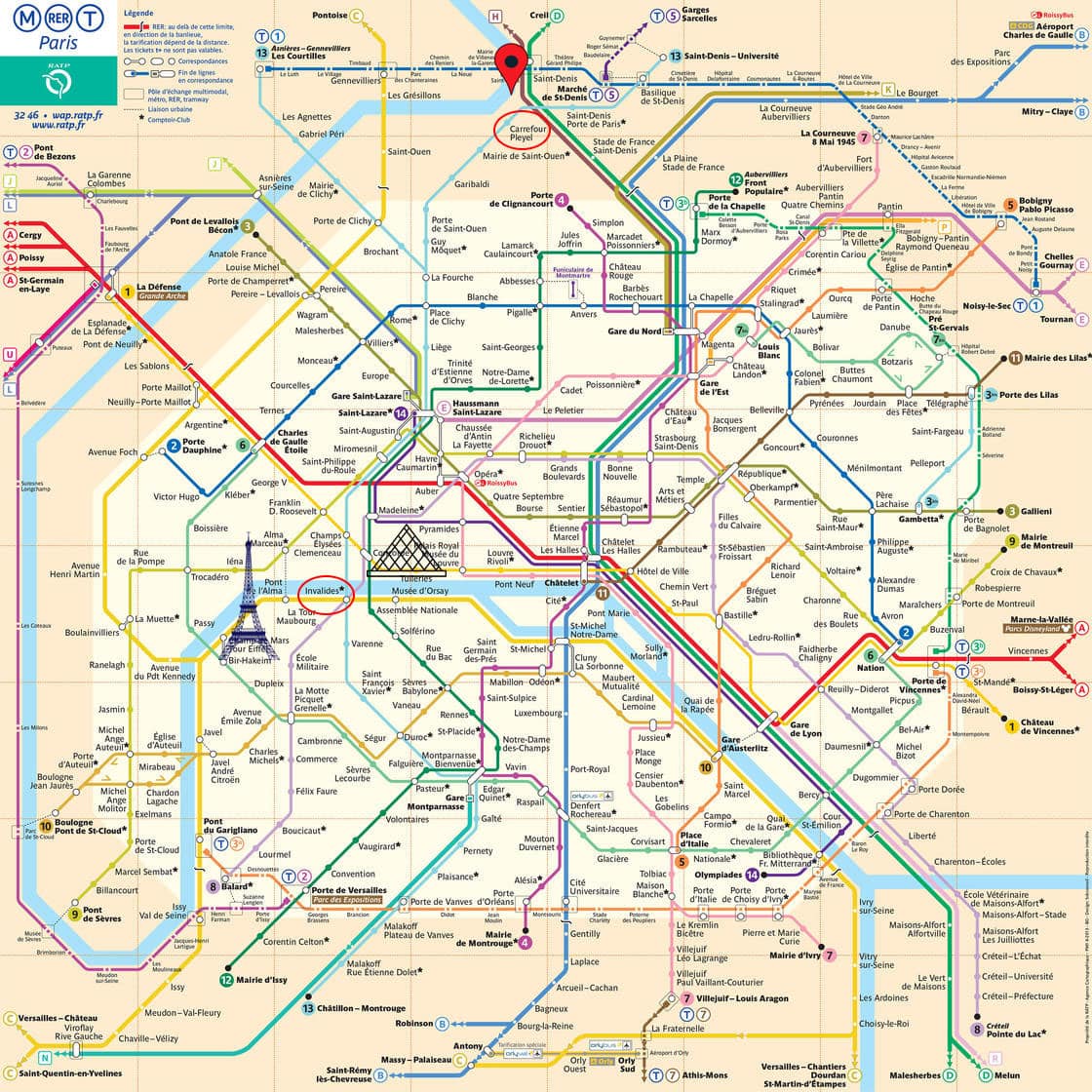 The route by metro from the mooring to the city centre

The Louvre is home to one of the largest and most famous art collections in the world and is one of the most visited museums in the worldwith around 9 million visitors per year. It is located in the former residence of the French kings, the Palais du Louvre. The Louvre’s collection includes about 380,000 works, of which about 35,000 exhibits are presented on an area of more than 60,000 m2. This makes the museum one of the largest museums in the world. The Louvre includes the famous painting “Mona Lisa” by Leonardo da Vinci. The painting was provided in 1804 by Napoleon, who had it hanging in his bedroom until that time. The Louvre also contains the statue “The Venus” of Milo and the sculpture “The Slave” by Michelangelo.

If you want to visit the museum, you should bring a lot of time. Unfortunately, we didn’t spend so much time, so we only had the opportunity to admire the building from the outside. But even this one is quite impressive with the large and some small glass pyramids in the courtyard of the palais. 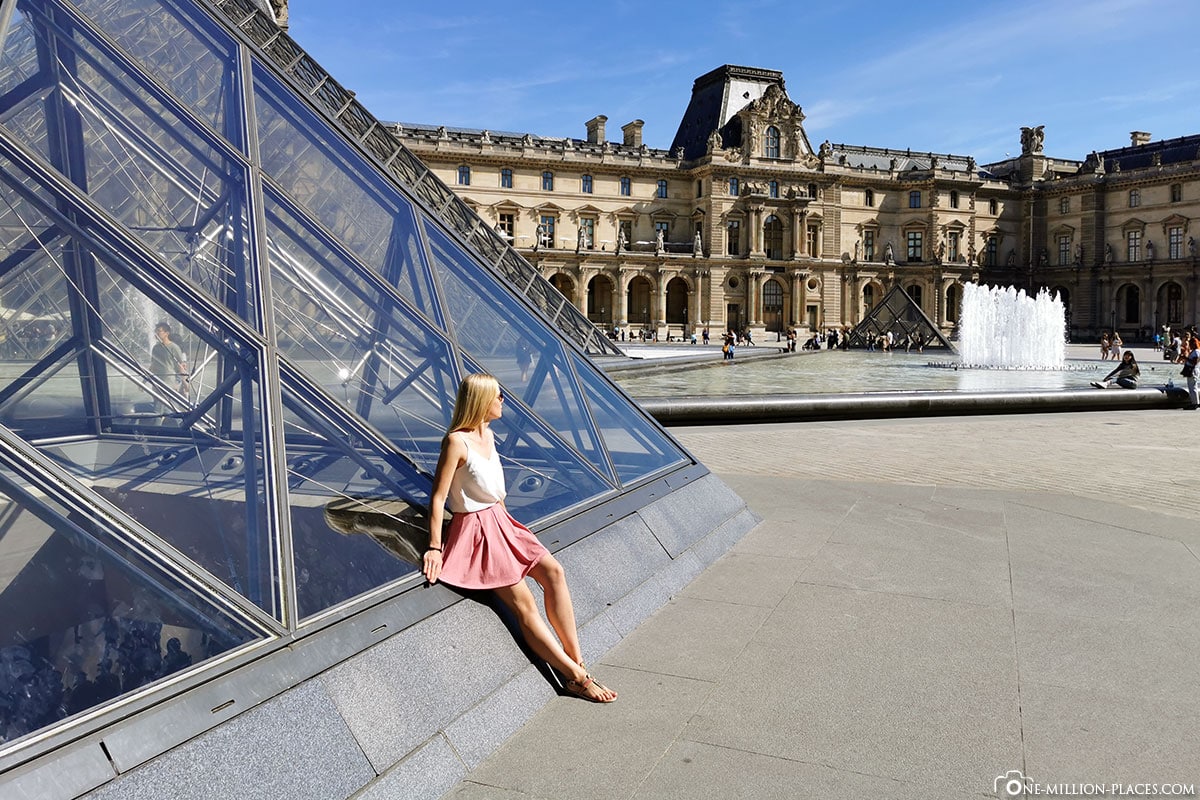 A great photo spot at the Louvre in Paris

The Eiffel Tower in Paris

Our second stop after the Louvre took us directly to THE landmark of Paris – the Eiffel Tower, one of the most famous sights in the world. The 324-metre-high landmark was designed by Gustave Eiffel as a monumental entrance portal and observation tower for the 1889 World’s Fair and in memory of the 100th century. anniversary of the French Revolution. As the tallest building in Paris, the Eiffel Tower still shapes the cityscape and is one of the most visited landmarks in the world with around seven million paying visitors per year. Since 1991, the banks of the Seine, with its buildings between the Pont de Sully and the Pont d’Iéna at the Eiffel Tower in Paris, have been a UNESCO World Heritage Site.

We have to admit that we have never been to the Eiffel Tower, as we always found it much more beautiful to look at it from close range but also from the distance. For example, when we were on the Tour Montparnasse in 2012, from which you have a great view of the city and especially the Eiffel Tower ❤

There are so many beautiful photo spotsto perfectly stage the Eiffel Tower. From Rue de l’Université, over the Pont d’Iéna road bridge, from the banks of the Seine to the stairs of the Jardins du Trocadéro. We couldn’t decide which place is the most beautiful – because of all you have a unique view of the Eiffel Tower.

We found it a bit of a pity that the area around the Eiffel Tower was now fenced on two sides with a glass wall about 3 meters high and 6.5 cm thick. These are intended to protect against shelling. Metal fences more than 3 metres high were installed on the other two sides. This enclosure is said to have cost a whopping EUR 35 million. When we were last here in 2012, the entire square around and under the Eiffeltum was still freely accessible.

But we made our favorite picture from the opposite bank of the Seine. There wasn’t as much going on here as it was right next to the Eiffel Tower. 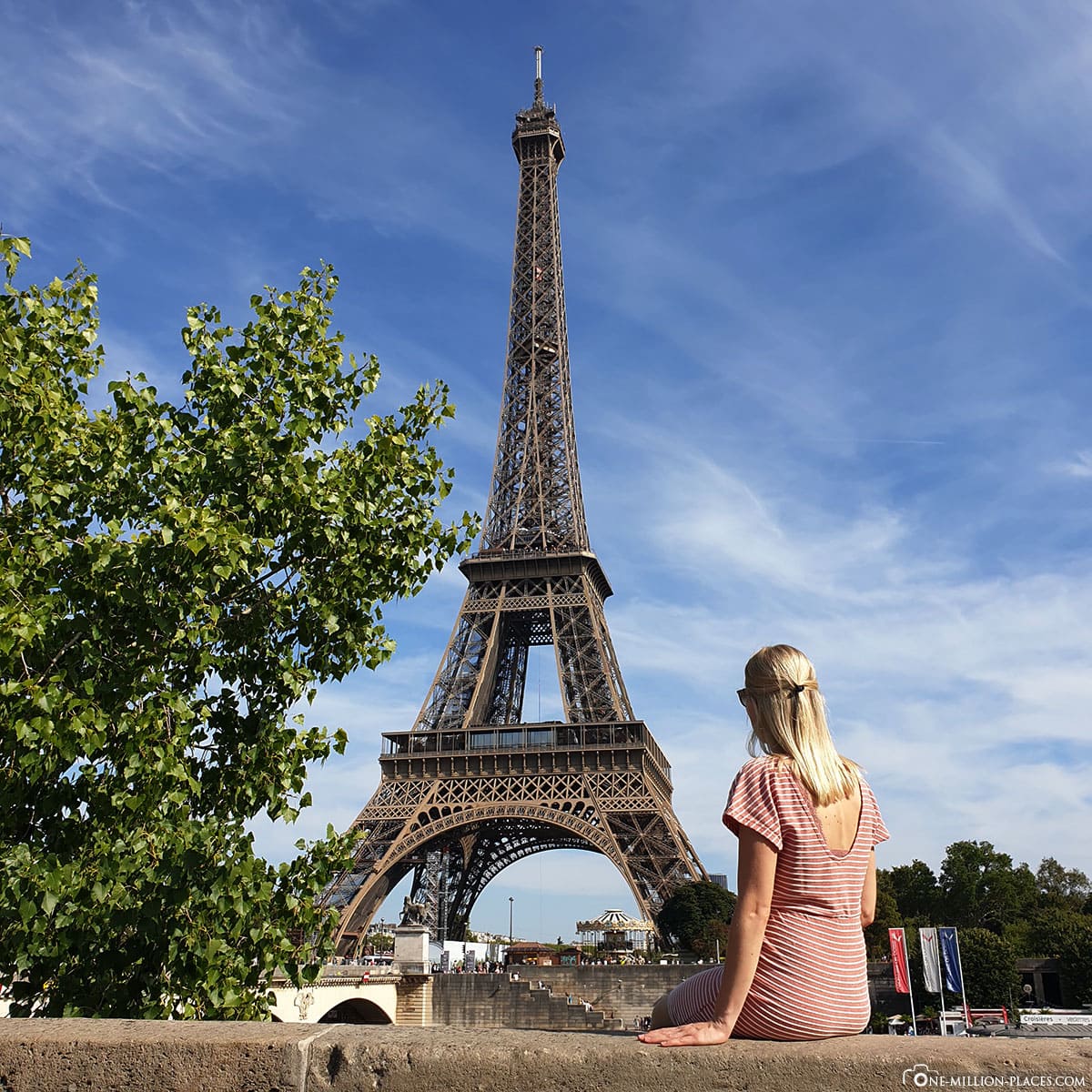 A great photo spot for the Eiffel Tower in Paris

After strolling through Paris for a few hours and being able to explore some of the top sights in the best weather, we took the metro back to the ship. Here we had a delicious dinner at around 8 p.m. As we slowly left Paris north at around 9pm, the officers of A-ROSA VIVA were introduced in the lounge for a welcome drink – what a great first day of our river cruise with A-ROSA 🙂

Paris, of course, has a lot of Starbucks stores and also has its own beautiful cup 🙂

The Starbucks City Cup of Paris