The 2nd day of our river cruise with A-ROSA on the Seine took us further upstream to the small town of Caudebec-en-Caux, which is also the westernmost pier of the A-ROSA on the Seine. From here to the mouth of the Atlantic, it is only about 50 kilometres. Caudebec-en-Caux is a relatively small town with about 2,300 inhabitants. As with many communities in Normandy, the name derives from the Old Scandinavian language: Caldebec means ‘cold bach’.

The A-ROSA harbour guide of Caudebec-en-Caux

You can also download the caudebec-en-Caux harbour guide here as a .pdf version. 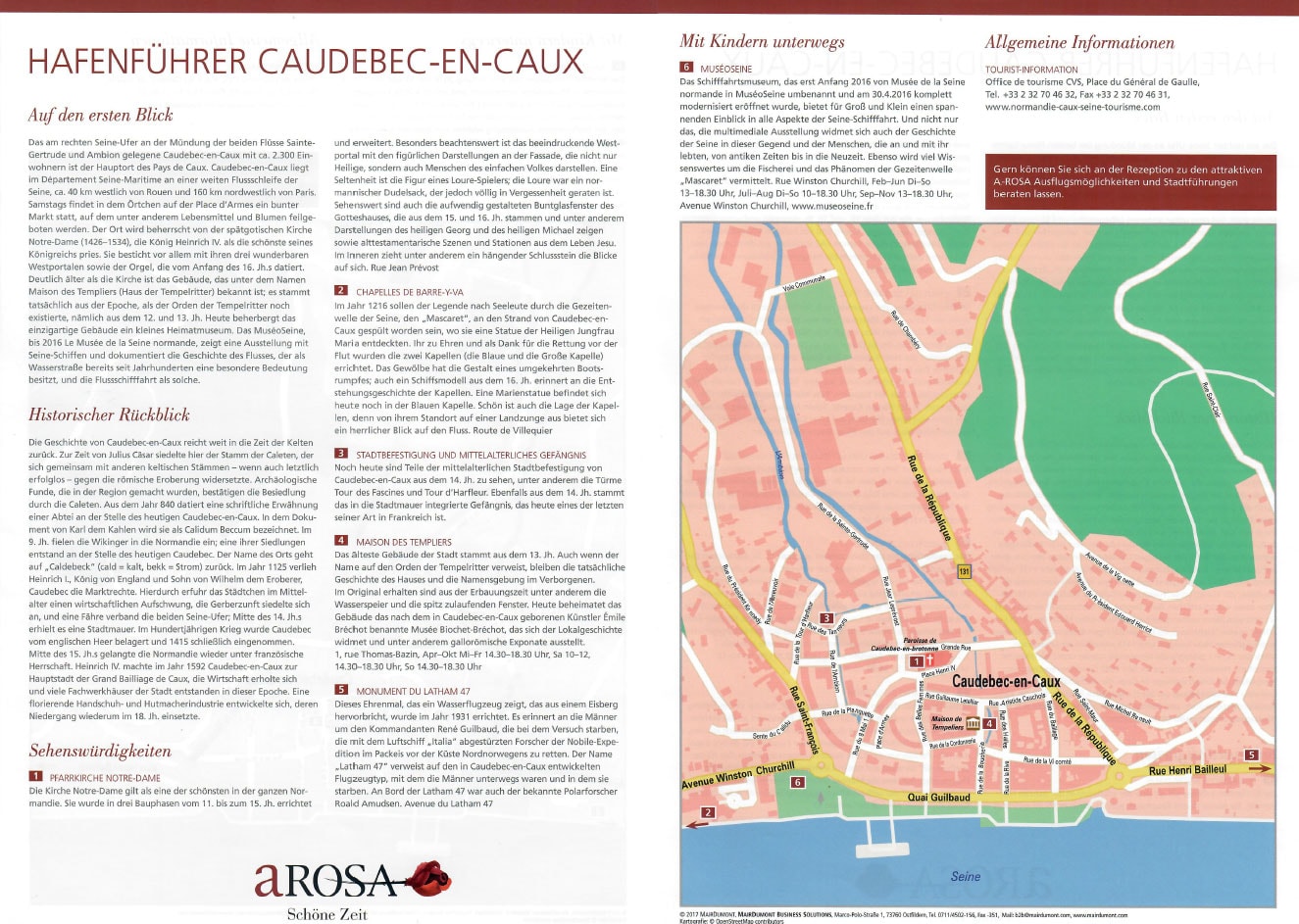 The A-ROSA harbour guide of Caudebec-en-Caux

The sights of Caudebec-en-Caux

After an extensive breakfast we wanted to start our walk through the town, but quickly realized that outside is really foggy weather. So we had breakfast a little longer and went out later – when the sky cleared up.

The sights of Caudebec-en-Caux can be explored on your own in a relatively short time. From the pier of the A-ROSA it takes only about 5 minutes to get to the city centre.

Our first port of call was the church of Notre-Dame from the 15th and early 16th century. On the one hand, the size of the church is impressive, but also the beautiful west portal, the stained glass malries and the decorations at the large spire. Inside the church is one of the largest hanging vaulted stones of the late Middle Ages.

Not far from the church is the oldest house in the city, which Maison des Templiers from the 12. and 13th century. Although the name refers to the Knights Templar Order, the history of the house and its naming remains secretly hidden. Today, the house houses a small museum with exhibits of local art history.

In some places in the city you can still see parts of the medieval city fortifications from the 14th century. For example, the towers Tour d’Harfleur and Tour des Fascines.

A little further from the city centre is the Monument du Latham 47aircraft monument. The 1.4 km long path(directions in Google) can be walked comfortably in about 20 minutes from the ship along the Seine.

The Flieger monument, erected in 1931, is reminiscent of a failed rescue operation with a seaplane. In 1928, one of these aircraft disappeared without a trace in the Arctic near Bear Island in the search for a missing airship. A famous polar explorer and all crew members also died. It is no coincidence that this monument stands in Caudebec-en-Caux: the Latham 47 was once developed by Jean Latham in Caudebec-en-Caux for the French navy, a total of 13 machines were manufactured.

From the banks of the Seine we could also see the Pont de Brotonne, one of the three Seine bridges built from 1960 downstream from Rouen.