You’ve certainly seen the pictures of the swimming pigs in the turquoise blue water, haven’t you? Don’t think we’re crazy now, but it’s these pigs that were one of the main reasons for us to fly to the Bahamas. Visiting the swimming pigs on Big Major Cay has been on our bucket list for so ooo long, so we just wanted to tackle it this year 🙂

Things to know about the swimming pigs in the Bahamas

Whether on Instagram, on Facebook or various travel pages – the pictures of the swimming pigs in the Bahamas are already unbelievably great 🙂

Why the pigs are in the Bahamas is not so clear. The island of Big Major Cay is uninhabited and the pigs are not native to the island. Some say they were abandoned here by a group of sailors who had planned to come back and cook them. Others say the pigs swam from a shipwreck nearby to the island.

The swimming pigs have become a huge tourist attraction in recent years. The demand for the excursions is now so great that one has simply “exposed” pigs on other islands of the Bahamas in order to profit from the flow of visitors and thus also to grab a piece of the cake. For example, the pigs can be found on Ship Channel Cay in the northern Exumas, on Rose Island (only 25 minutes from Nassau) or on the island of Long Island.

But if you want to see the “Original Pigs”, you have to go to Pig Beach on Big Major Cay! 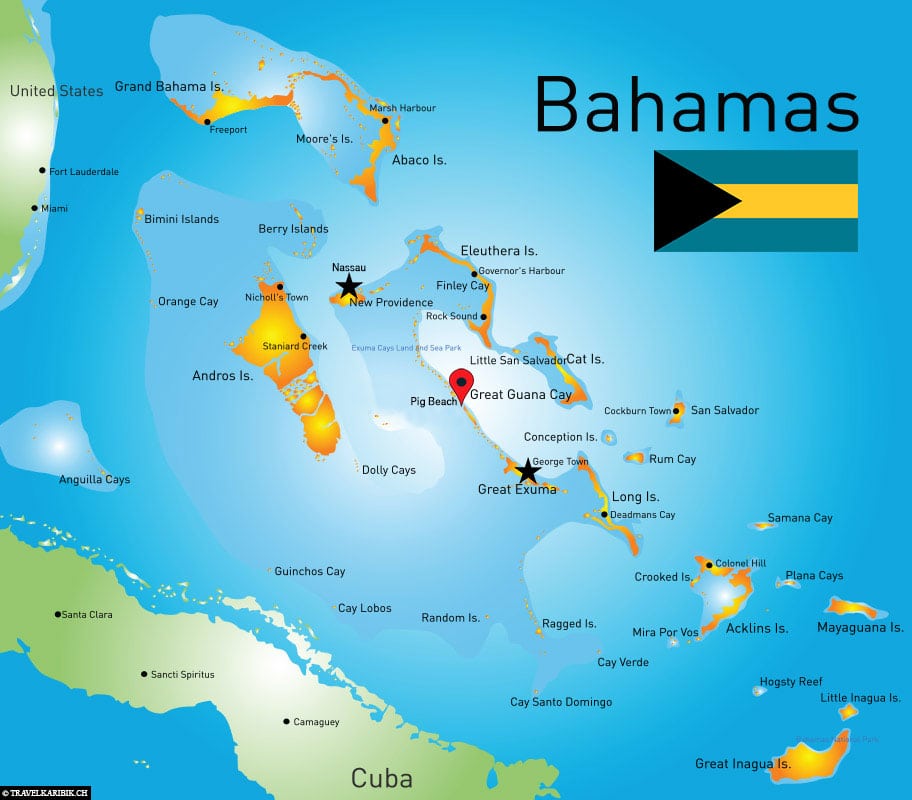 Where to find the swimming pigs of Big Major Cay in the Bahamas?

How to get to the swimming pigs?

There are several ways to get to the swimming pigs of Big Major Cay:

From Nassau: The furthest way to the swimming pigs is certainly from Nassau. But since here are also most tourists because of the cruises, there are various tour operators such as Hidden Beaches Bahamasthat offer day trips to Big Major Cay. The price of the tour is about 400 USD per person and you are about 8 to 9 hours on the way. It’s a little cheaper and faster if you want to go to the pigs on Ship Channel Cay. Powerboatadventures offers day trips from Nassau for USD 220 per person. Another option is to fly from Nassau to George Town or Staniel Cay, start a tour from there and fly back to Nassau in the evening. However, since there can always be delays in flight times, you should not have planned anything important at the end of the day!

From Staniel Cay: The fastest way to get to the swimming pigs is to plan a stay in Staniel Cay. This is the nearest island to the famous Pig Beach and it takes only about 10 minutes by boat. There are also some hotels and cottages

here, so you can also spend a few days here in a relaxed way. We would have liked to have done that, but the few accommodations on the small island were unfortunately already fully booked because of the Easter weekend.

From Great Exuma: We had our hotel in George Town on the island of Great Exuma. From here also several providers start daily with day tours to the swimming pigs and one – like us – is ideally picked up directly from your hotel.

Our tour with Coastline Adventures

We chose Coastline Adventures, which offers the “Swimming Pig Tour” daily. In the morning 7.15 a.m. we were first picked up from our hotel and an hour later we were at the boat dropper in the north of the island. On our tour there was a couple who unfortunately came in from Nassau, so we had to wait almost an hour for the two due to a flight delay. Around 9.30 a.m. it was finally possible to start. In front of us was an 8-hour tour together with about 30 other people. That was quite a lot. But we suspect that it is similarly crowded on other tours. For the tour we paid 215 USD per person. If you want, you can have lunch on the tour for 20 USD in a restaurant and if you want to see the nurse sharks in the Compass Cay, you have to pay a landing fee of 10 USD on site.

We have found a nice map, in which the main attractions that start most tours are drawn. The map can be viewed here.

Our first stop was the famous Thunderball Grotto. The grotto got its name from the 1965 James Bond film “Thunderball”, which was shot here. The grotto was also the setting for the later remake of “Thunderball” called “Never Say Never Again” (1983).

We stopped by boat a few meters from the cave entrance and jumped directly into the water with our snorkeling stuff. The cave is only entered by a small, almost hidden entrance, which is insanely narrow and lies under water. If you have made it through here, you swim straight into the grotto. And it’s pretty cool. Through the opening on the cave ceiling the light shines into the cave and the turquoise blue water glitters very nicely.

For a short toilet break we stopped by boat at the Staniel Cay Yacht Club. Unsuspectingly, we walked along the jetty towards the Yacht Club, when suddenly dark shadows appeared right and left under the jetty and swam past. On closer inspection, it was clear: these are nurse sharks. And not just one or two, but quite a lot. How cool. The nurse sharks lie here completely relaxed in the bay and enjoy their life 🙂

Since Staniel Cay even has a small airport that can be flown from Nassau, the island is a perfect starting point for tours to the pigs, nurse sharks and iguanas. Because all the highlights can only be reached by boat for a few minutes. 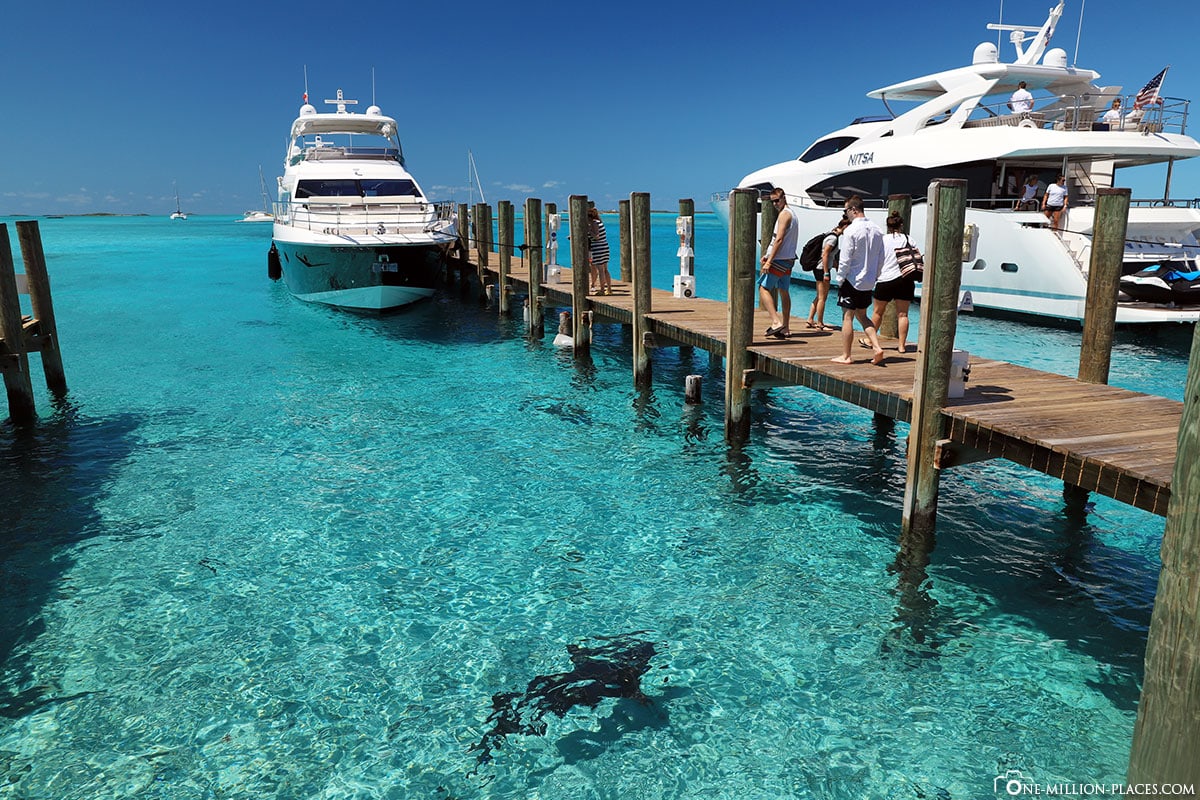 The pier in Staniel Cay and a nurse shark

After our stopover on Staniel Cay came finally the highlight of the tour, with which we were able to fulfill one of our absolute bucketlist goals: The swimming pigs of Big Major Cay!

Already when we approached the beach by boat, the pigs went into the water and swam towards us. How cute! We anchored a few meters from the beach and then – with a few slices of toast in our hand – swam to the beach. You really have to be very careful here, because the pigs are very smart and immediately smell who has food in their hand and come directly to you. If you don’t give them food right away, it can also get a bit uncomfortable, because here there are pigs that weigh more than 180 kg! Next to us there were some other boats on the beach, so it was already very crowded and totally touristy. Idyllic is definitely something else. But there were also some moments when we had a pig completely for ourselves and could take beautiful photos.

What you should definitely consider: What you throw in the mouth of the pigs in the front of the mouth, of course, will come out at the back at some point … and then swims around in the turquoise blue water 😉

Currently there are about 20 pigs and piglets at Pig Beach,which lead a relaxed life here. We stopped at Pig Beach for about 30 to 40 minutes. We would have liked more time here, as it was a very special experience.

The 2nd part of our tour to the nurse sharks, the white sandbanks in front of Pipe Cay and the iguanas on the beach of Bitter Guana Cay can be found here.