After seeing the most famous sights of Nassau last week, we wanted to see Paradise Island today. The small island, which belongs to the town of Nassau and is located about 440 meters off the north coast of the island of New Providence, is connected to Nassau by 2 large bridges. The island is best known for the Atlantis Hotel. We were also able to find another, somewhat unknown attraction on the island, which should not be missing from any sightseeing program.

The Hotel Atlantis on Paradise Island

Atlantis in Nassau is a hotel of superlatives! 141 hectares of grounds, 8,000 employees, 3,900 hotel rooms, 21 restaurants, 19 bars and lounges, the largest casino in the Caribbean, a marina with 63 yacht moorings, a water park with 11 pools, an aquarium, 14 lagoons, 3 children’s clubs. Wow! Sounds exciting, doesn’t it? And that’s why we really wanted to take a closer look at the hotel. 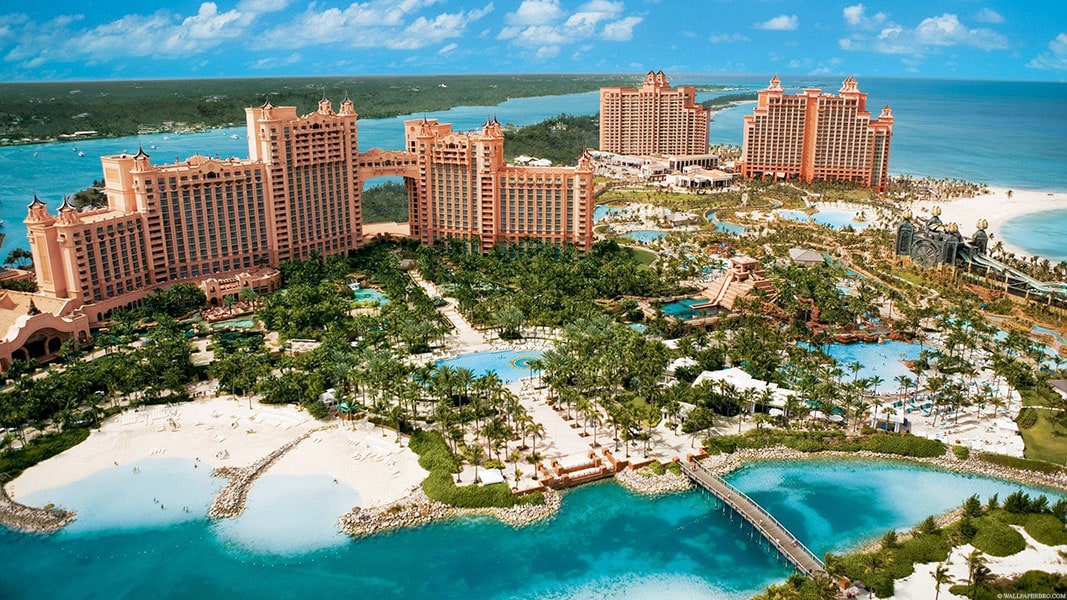 How to get from Nassau to Hotel Atlantis?

To get from downtown or from the cruise terminal in Nassau to the Hotel Atlantis on Paradise Island, there are several options:

(1) Taxi: A taxi ride is probably the most convenient way to get to Paradise Island – unfortunately also the most expensive. We haven’t tried it ourselves, but the trip costs about 15 USD. There are probably also special group taxis, where the trip per person is then only 5 USD.

(2) Water taxi: A water taxi runs between the port of Nassau and Paradise Island every half hour between 9 a.m. and 6 p.m. From the pier on Paradise Island it is about a 10 minute walk to the entrance of the Atlantis Hotel. A one-way trip currently costs USD 4.

(3) Public bus: From downtown Nassau, take the public bus (Jitney’s) for USD 1.50 per person to sir Sidney Poitier Bridge, get off here and walk across the bridge to Atlantis Hotel.

(4) By car: Of course you can also drive a rental car to Paradise Island. Road traffic is charged a fee of USD 2 when leaving the bridge. Since 1966, Paradise Island has been connected to the island of New Providence by a bridge, and a second bridge was built in the late 1990s. Hotel guests pay USD 20 per day for parking. Non-hotel guests must look for other parking spaces on Paradise Island.

(5) Walking distance: Of course, you can also walk the 3 kilometers from the Cruise Terminal to the Hotel Atlantis. Just walk along Bay Street and it takes about 30 to 45 minutes, depending on the speed. Pedestrianuse of the bridge is free of charge for pedestrians.

A walk across the Sir Sidney Poitier Bridge

We had decided from the city centre to take a public bus ride. Since they don’t cross the bridge to Paradise Island, we had to get off at the bridge and walk the rest. But that’s not a bad thing, because from the Sir Sidney Poitier Bridge you have a magnificent view of Paradise Island and the grounds of the Hotel Atlantis – in the foreground you can see the colourful rows of houses of the Harborside Resort and in the background the main building, the large Royal Tower. If you look back towards the port, you can also see the large cruise ships.

The marina is a marina associated with Atlantis, which is designed for the mooring of large yachts. On the east side of the marina is Marina Village, a small shopping centre with souvenir shops, boutiques and restaurants. We walked once across the Marina Village – past the big, impressive yachts until we arrived at the entrance of the Atlantis Hotel.

The property was originally part of the Paradise Island Hotel & Casino, which opened in 1968. In 1994, Paradise Island was bought by South African hotel magnate Sol Kerzner, who was impressed by the location of the property: a lush tropical island with a pristine white sandy beach. Kerzner wanted to build the world’s most impressive resort here – dreams were to come true and a lot of fun to experience. Within just 8 months, he managed to turn the entire island into a tropical paradise: his new resort, which included parts of the old hotel but also new buildings, was officially opened at the end of 1994.

In the years that followed, Kerzner pursued the theme of ‘Atlantis’ more and more: the aim was to bring to life the myth and legend of the lost city of Atlantis. More than USD 800 million was due to build the aquarium, new lagoons, waterfalls, the marina and a water slide park. In 1998, the Royal Towers were opened, which still characterize the image of the Atlantis Hotel with their architectural forms of arches, domes and towers. The ‘Bridge Suite’ which connects the towers of the Royal Towers is striking. A night in this suite will probably cost a whopping 25,000 USD. Well, if that’s not even a bargain 😉

From 2007, there were further extensions to the hotel: a luxurious resort, another hotel, a large dolphinarium, an extension to the water park, a nightclub, new conference rooms and a huge spa were built for USD 1 billion.

Of course, we didn’t want to miss a visit to the casino. Even if we didn’t play here, such a casino is always impressive: more than 700 slot machines and 85 gaming tables can be found here in Atlantis. And what we liked here again – just like in Las Vegas or Lake Tahoe – is that you don’t have to be particularly chic here to be allowed to enter the casino. Here everything runs according to the motto ‘Come as you are’.

Certain areas of the Atlantis Hotel were viewed without paying a fee. These include, for example, the Marina Village, the casino or some parts of the outdoor area.

However, many areas of hotel Atlantis are only accessible with a so-called Day Pass, which can be purchased either on site or in advance on the Atlantis Hotel website. A day ticket for access to the beaches (Atlantis Beach Day Pass) alone costs 66 USD and access to Aquaventure Water Park a proud 135 USD. Separate tickets are also required for the individual attractions. For example, you can go on a kayak ingession with dolphins, snorkel in the ruins of Atlantis (128 USD) or even play with sea lions (218 USD) for 77 USD.

The outdoor area of the hotel

The grounds of Atlantis Resort are really huge. We couldn’t look at everything the hotel has to offer in the short time – certainly because we didn’t have access to all areas. The Aquaventure, a large water park with various attractions, is worth mentioning. There is, for example, a slide tower modelled on a Mayan temple. From above, you slip through a 20-metre-high transparent tunnel nestled in a lagoon filled with sharks. 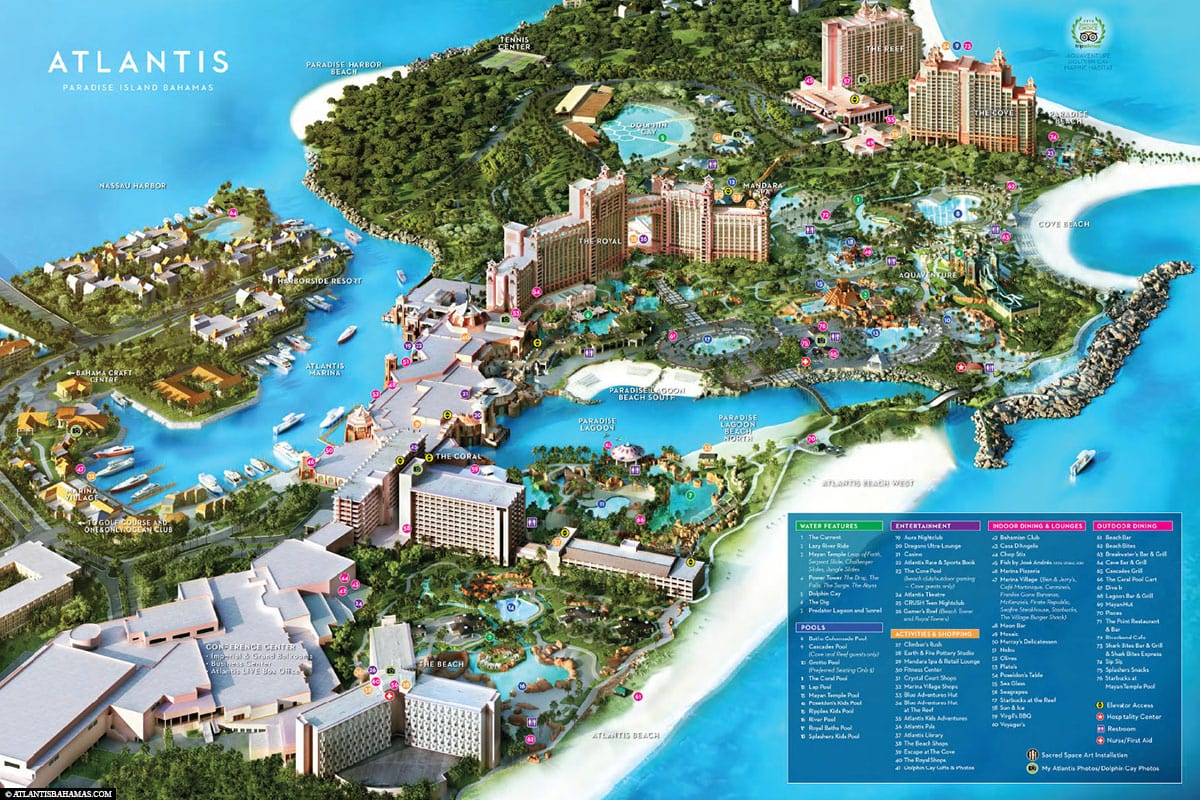 A map of Hotel Atlantis (Bahamas)

In addition, there are 14 lagoonson the site, including sea creatures such as sawfish, barracudas, stingrays and sharks, as well as an 18-hole golf course.

The aquarium of Hotel Atlantis

Since we are big fans of the underwater world, we really wanted to see the aquarium at atlantis Hotel. At a ticket office we bought tickets for the “Discover Atlantis Tour” for 44 USD per person.

With the ticket you have access to the Dig Aquarium, which is modelled on an archaeological site and brings the lost Atlantis to life. In addition, there are 14 different lagoons with over 30 million liters of seawater and more than 50,000 animals representing over 250 different species. Not only the hotel is a superlative, but definitely also this aquarium. We particularly liked the huge manta ray in the Dig Aquarium. We could have watched for hours here as he made his rounds in the pool. Simply fascinating animals. Outside there are also some pools with predatory fish (e.g. sharks, barracudas) but also with small, sweet eagle rays.

With our ticket we didn’t actually have access to the beaches of Atlantis as well as the swimming pools and water slides. But somehow nobody really controlled this with us and we were able to move a bit over the terrain and see some attractions.

Although atlantis Hotel is without question the main attraction on Paradise Island, there is another – rather unknown – attraction that should not be missed. About a 20-minute walk from Atlantis Resort, Versailles Gardens features a French cloister.

After the Atlantis was totally overcrowded with tourists, we had our peace here, because there was no other tourist here – how cool 🙂 The Versailles Gardens consist of a multi-level, overgrown garden, which is designed in a rectangular design. We particularly liked the French cloister, which dates back to a 14th-century Augustinian monastery. The publisher William Randolph Hearst dismantled this cloister and imported it from Europe to have it rebuilt in the UNITED States. Parts of this later came into the possession of Huntington Hartford, who brought them to Paradiese Island in 1968 and had them rebuilt there.

The Versailles Gardens are owned by the One & Only Ocean Club, but are still a public park and admission is free.

A map with all the sights of Nassau

In the following map on Google MyMaps we have drawn the most important sights of Nassau.

Our Starbucks Cup from the Bahamas

There are currently several Starbucks stores in the Bahamas, e.g. in Freeport on the Grand Bahamas or in Nassau on the island of New Providence. And this is the cup of the Global Icon series.