Whether on Instagram, on Facebook or various travel sites – the pictures of the swimming pigs in the Bahamas are already unbelievably great and it was always a great wish for us to see them live. After we had already visited the “original pigs” on Big Major Cay on the Exumas a few days ago, we did not want to miss the chance to experience such a spectacle again: here on Long Island 🙂

Things to know about the swimming pigs of the Bahamas

Why the pigs are in the Bahamas is not so clear. The swimming pigs of the Exumas island Big Major Cay are not native there. Some say they were abandoned here by a group of sailors who had planned to come back and cook them. Others say the pigs swam from a shipwreck nearby to the island.

The swimming pigs of Big Major Cay have become a huge tourist attraction in recent years. The demand for the excursions is now so great that one has simply “exposed” pigs on other islands of the Bahamas in order to profit from the flow of visitors and thus also to grab a piece of the cake. For example, the pigs can be found on Ship Channel Cay in the northern Exumas or here on the island of Long Island.

Where to find the pigs on Long Island?

There are two different places on Long Island where you can see the swimming pigs: on the one hand, you can find the piglets on the island of Dove Cay in the northwest of Long Island. You can book the tour via Bonafide Bonefishing or directly via the Stella Maris Resort. The other island is called Sandy Cay. It is located in the middle of Long Island on the western side. You can book a tour here via Big ‘V’ Adventures or directly via the Stella Maris Resort.

We visited the pigs on the island of Dove Cay. 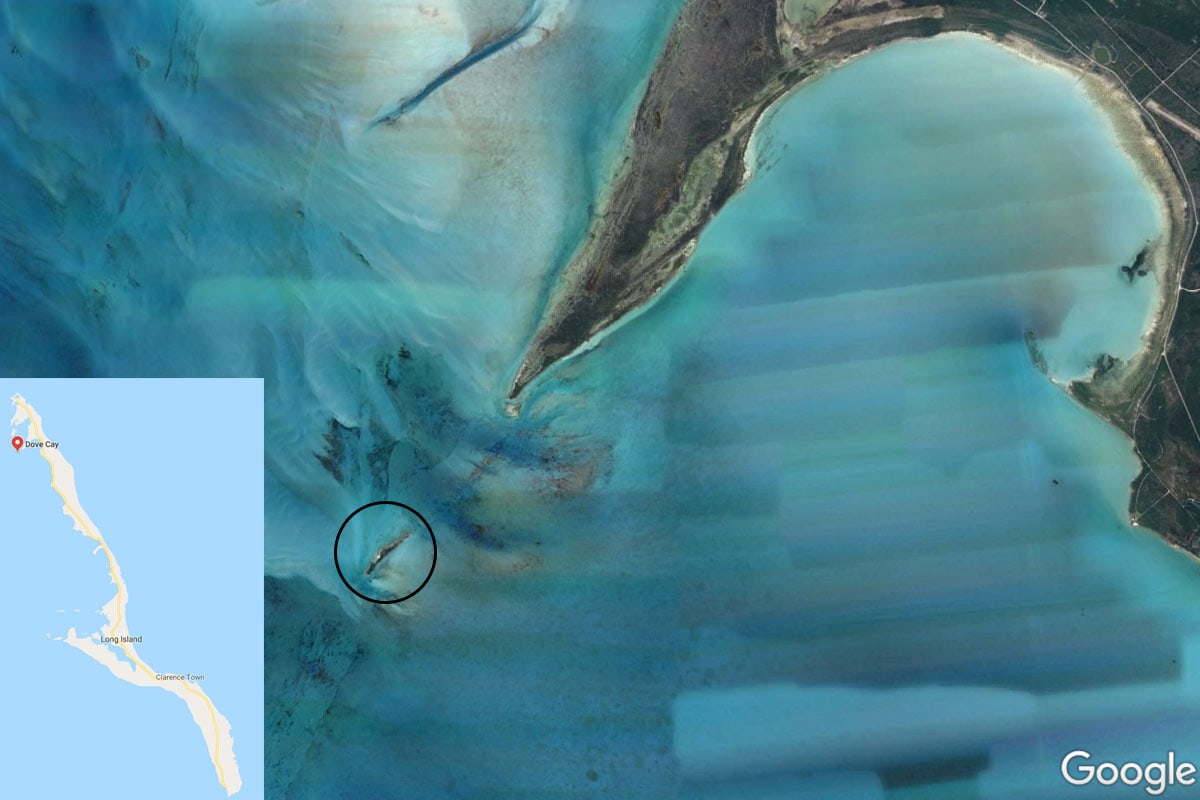 We booked our private tour through the Stella Maris Resort. The cost of the 4-hour boat trip is USD 350. We were taken by the hotel owner Jill by car to Stella Maris Marina, where our boat was already waiting for us. We were positively surprised, because the boat was really big and super comfortable 🙂 With enough provisions and water for the pigs we started after a short time and we drove out of the harbour by boat.

By boat to Dove Cay Island

From the marina we went a little along the coast, because our captain was looking for turtles here. A small turtle had shown itself for a short time, but then unfortunately was just as quickly gone again.

From here we went on to the island of Dove Cay, which was only a few minutes away. The island is about 400 meters long and maximum 50 meters wide and is located in the middle of the dreamlike turquoise ocean. The island is privately owned and can normally only be entered via a booked tour.

The swimming Pigs of Long Island

On our arrival we were already eagerly awaited and two larger pigs swam directly towards our boat. How cool 🙂 The two have directly dusted off a few carrots and moved through the water.

After anchoring a few meters from the island, we were able to leave the boat and go to the island. We quickly realized that there is actually a small zoo living here: not only pigs are here on the island, but also goats and chickens.

Even though visiting the swimming pigs of Long Island was a really nice experience, there were also some things that we didn’t like so much.

Very positive isthat compared to the swimming pigs of Big Major Cay you are completely alone here. If we shared the beach with 70 other tourists at Pig Beach on the Exumas, here on Dove Cay there were only a few goats and chickens 😉 Of course, this also has the huge advantage that no one can walk through the picture here. In addition, we had a lot of time to dedicate ourselves to the pigs, feed them and take hundreds of photos.

We felt it was negative that when booking the piggy tour from the Stella Maris Hotel, we were not informed that there are two different beaches of piggy on Long Island. The piggy beach on the other island sandy Cay is a real white, fine sandy beach – unfortunately there was no such thing here on Dove Cay. That was a bit of a pity. If we had known this before, we would have chosen the other tour, even if the pigs of Sandy Cay are probably not so “hand-tame”. We were a little disappointed that the pigs of Dove Cay only go into the water very briefly when the boat arrives (and if they have to do their business). Otherwise they only stay on the beach, i.e. swimming pigs can be seen less here. Our guide provided the pigs with a lot of food immediately after arrival. As a result, they were on their food troughs almost all the time, ate their food and then went under the trees in the shade and slept. Interacting with the pigs was really very difficult.