After our great experience with the floating pigs of Big Major Cay, our day tour with Coastline Adventures went even further. And it went for us again into the water, because it followed the experience with the famous nurse sharks of Compass Cay, with which you can swim here in the Bahamas.

The nurse sharks of Compass Cay

We already knew the nurse sharks of the Exumas on social media and had been happy to be animal-like in the run-up to the event. Entering the pier of Compass Cay you have to pay a so-called landing fee of 10 USD per person, as the island is privately owned. If you stay in the boat, you don’t pay this fee – but then you don’t have the opportunity to see the nurse sharks.

Just a few meters further on the jetty, you could already see the first nurse sharks. And 2 minutes later we were in the water – among the nurse sharks, which you can even touch. Totally cool! Nurse Sharks are close relatives of the carpet sharks and whale sharks and can reach a length of more than 4 meters. The nurse sharks of Compass Cay are fed by the fishermen, which is why they are present here in such large numbers. If they are fed up with the tourists, they cut off and lie down on the sandy ground to relax.

We stopped here for about 20 minutes before we went on to a beautiful sandbank.

The white sandbanks in front of Pipe Cay

A white pile of sand in the middle of the beautiful turquoise-blue lagoon in front of Pipe Cay. When we arrived at the lonely sandbank with our boat, we could hardly believe our eyes. It felt like we were in a Bacardi or Raffaello TV commercial: it’s not really more paradisiacal. And it was the perfect place to unpack our drone DJI Mavic 2 Pro and watch it from above. And that looked almost even nicer 🙂 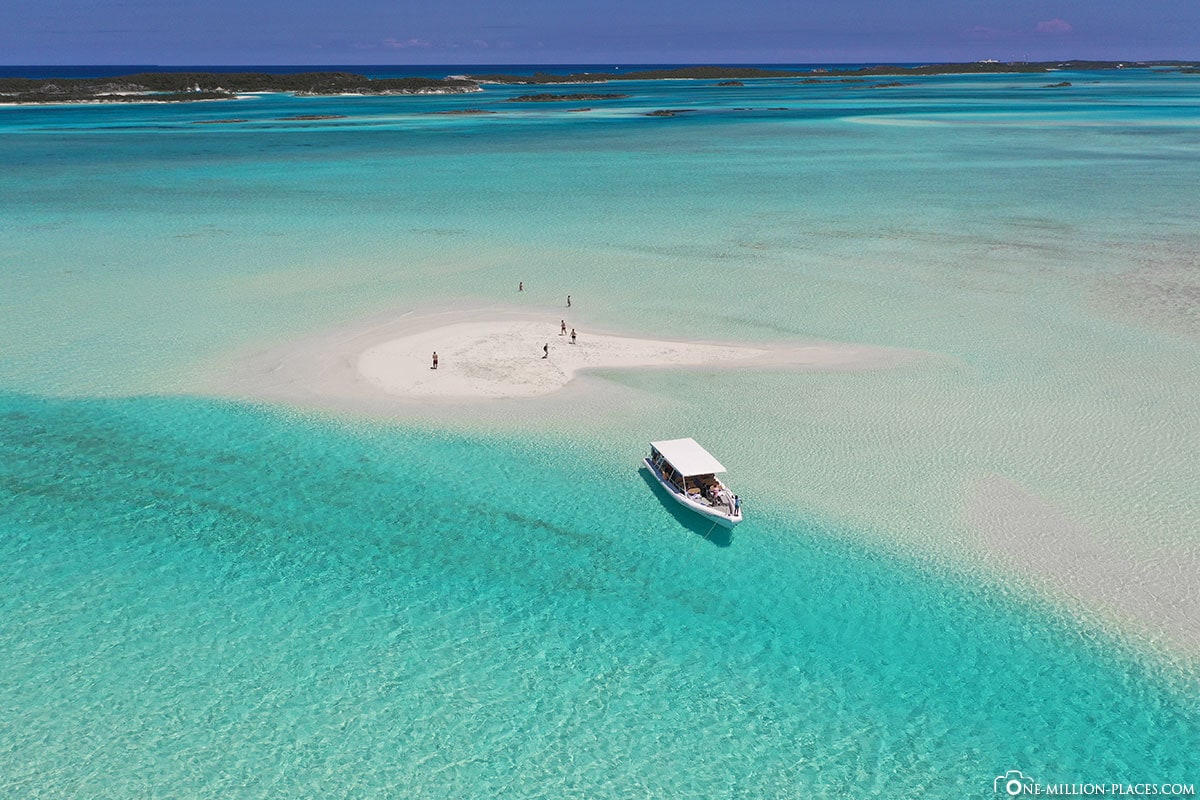 Drone footage from the sandbank

From here we went on to another island, where we had lunch at a local restaurant on Great Guana Cay. Here we could serve a local buffet for 20 USD per person and treat ourselves to a break.

The iguanas on the beach of Bitter Guana Cay

On the way to our last stop, we passed a whole series of private islands owned by stars and asterisks such as. David Copperfield or Faith Hill.

And then the beach of Bitter Guana Cay was already in sight: Welcome to the beach of the iguanas. The so-called “Bahamian Rock Iguanas” of the Exumas are an endangered species with a wild population of less than 1,300 animals. They like to stay here on the deserted beach of Bitter Guana Cay and are primarily herbivorous, i.e. leaves, flowers and fruits are part of their daily food. With a piece of salad in hand, we approached the little guys and were able to feed and caress them.

A great conclusion to a great day, on which one experience followed the other. Swimming with piglets and nurse sharks in one day – terrific! With unforgettable memories in our luggage, we went back to Great Exuma 🙂