After we had spent a very nice week in Mauritius in February, now our next holiday was coming up. We haven´t planed anything in advance – so we only booked our flights to Florida & the Bahamas only a week in advance 🙂

The period at the end of April/beginning of May is actually fixed for us every year as a holiday, because we both have birthdayhere here and we can also celebrate our wedding anniversary here since last year after our beach wedding in the Maldives.

This has always worked very well the last few years, because here the Easter holidays were already over and you could travel quite cheaply. This year, however, Easter was really late, which is why our desired dates fell exactly into the Easter holidays. We only realised this far too late. Our first desired destination was the Seychellesat first. So we had looked here for suitable last-minute offers. But since we started planning late this time, the flights were already almost all fully booked and accordingly expensive and also our possible cooperation hotels had no more free rooms at this time. So we had to think about something else. But fortunately, we do not lack new goals 🙂

The Bahamas have been on our bucket list for a very long time. Of course, mainly because of the famous floating pigs and the nurse sharks, with which you can climb into the water together. We have already seen a lot of pictures of this on the Internet and have always found this incredibly fascinating, so we would like to experience this. In addition, last year at the ITB in Berlin we had a great conversation with the destination Bahamas, where we learned a lot more about the different islands. For example, did you know that the Bahamas consists of over 700 islands? Many probably know the island of New Providence with the capital Nassau and the famous Atlantis Hotel from a cruise. But we weren’t so aware at first that the Bahamas have so much more to offer.

What is the best way to get to the Bahamas?

Unfortunately, there are currently no direct flights to the Bahamas from Germany. Unfortunately, you have to plan at least one stopover.

A direct flight to the Bahamas from Europe is currently only available with British Airways from London. Otherwise there are flights to Nassau (Lynden Pindling International Airport) with Air Canada from Toronto and many connections from the USA (e.g. New York, Atlanta, Houston, Boston, Dallas, Tampa, Ft. Lauderdale, Newark, Charlotte, Philadelphia, Orlando, Miami, Key West). Bahamasair also flies to several destinations in the Caribbean (Cuba, Barbados, Belize or Dominican Republic).

From Miami and Fort Lauderdale there are almost daily ferries to Bimini or Freeport, which can even be booked as a day cruise.

Our flight combination with the Bahamas & Florida

Since we found it quite charming to spend a little time in Florida after the Bahamas, we looked for multi-stop flights from Frankfurt to the Bahamas and then from Florida back to Frankfurt. Due to the Easter holidays we were amazed that we found a relatively cheap flight for the holiday season, with which we could combine the Bahamas and Florida. In the end, we decided on the following flight combination:

This flight combination cost United.com 688 EUR per person via the website. For example, if we had departed from Miami a day later, the price would have risen to over 1,000 euros. If we had had the opportunity to travel 2 days earlier, we could have saved another almost 150 € per person. So it’s always a mix of luck, a lot of trying out (airlines, date, cities) and possible compromises (stopovers) to get a cheap flight bargain.

The missing flights between the islands in the Bahamas and from Nassau to Florida we booked separately. The prices per flight here are about 100 €. Do you know why sometimes return flights are cheaper than a simple outbound flight?

We always create a very comprehensive Excel table for each of our holidays, in which we include all relevant information (routes, flights, times, hotels, car rental, activities). of the respective costs. So we always have a very good overview of what the trip costs in the end. Here’s a little excerpt from our two-week trip to the Bahamas and Florida:

Our stations in the Bahamas and Florida

Our flight from Frankfurt to Washington D.C.

Late friday afternoon we started on time from Frankfurt to the USA at 5.10 p.m. The flight with United Airlines lasted a total of 9 hours. Since the flight was not fully booked, we kindly got a free upgrade to Premium Economy Class at the check-in counter – what a surprise 🙂 The seat spacing was really good and there were also some movies that we could watch. So time actually passed relatively quickly. Just in time around 8 p.m. we landed at Dulles airport and then had to queue for about 1 hour at the immigration. Welcome to a night in the U 🙂

The stopover in Washington D.C. was actually quite ok, because after the flight and the time difference we could spend the night in the hotel relaxed before we flew on to Nassau the next morning. This has helped quite well to combat jet lag a bit. We had decided to spend a night at the Hampton Inn Washington-Dulles Int’l Airport South, which cost 73 EUR via Expedia.

The Hampton Inn is a typical American airport hotel. In front of the airport there is a transfer point at Stop 2H for all the hotel buses, which take you to the different accommodations at the airport. We had to wait about half an hour until the shuttle bus arrived and could take us with us. The check-in at the hotel was very fast, the staff very friendly. The rooms were very spacious and the beds cozy. Breakfast was included in the price. Since we had to go to the airport early in the morning, we could no longer have breakfast at the hotel, but we received two breakfast-to-go bags with a water bottle, an apple and two snacks. 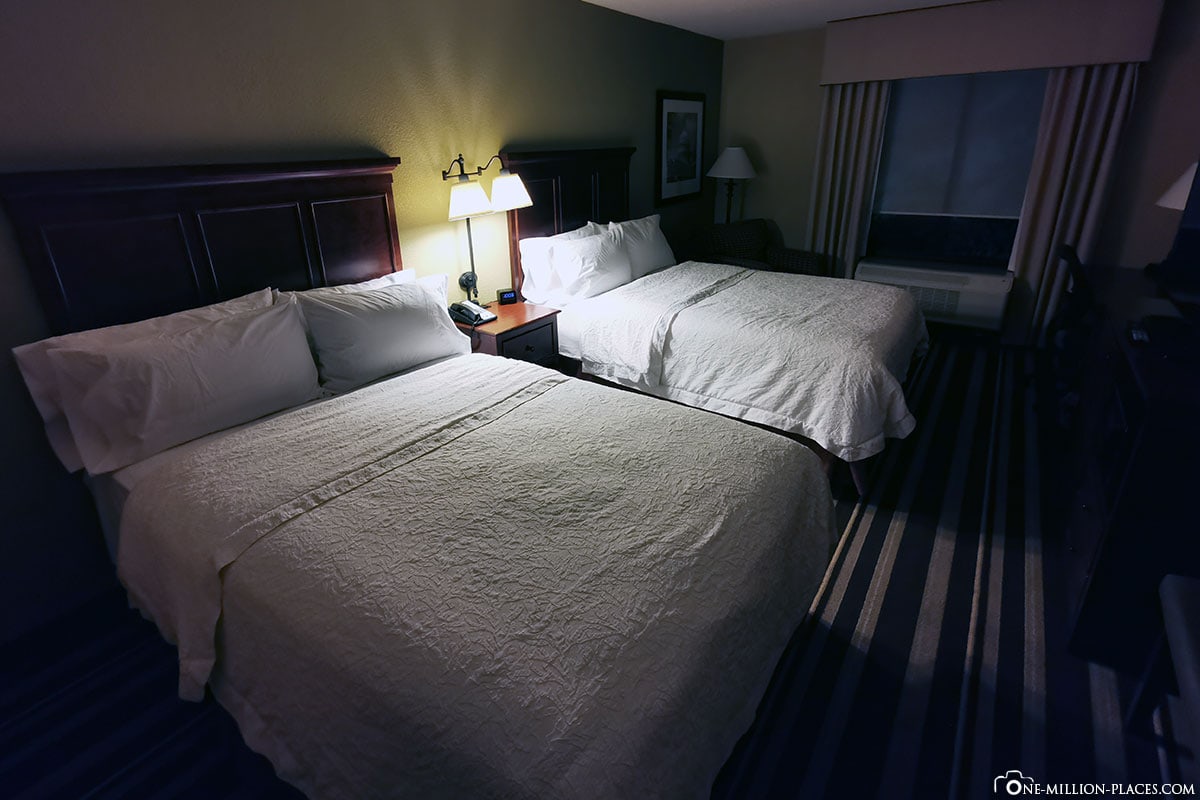 Our flight from Washington to Nassau

The next morning we went with United Airlines to Nassau. The flight departed on time at 8.16am at Washington-Dulles Int’l Airport and we landed at Lynden Pindling International Airport in Nassau 3 hours later. The weather was unfortunately not the best on arrival, but nevertheless we could already see the unbelievably great colors of the water in the Bahamas 🙂

Our hotel in Nassau

Unfortunately, we had not considered during the planning that our two stays in Nassau were on a Saturday. On weekends, the Bahamas are the hotspot for American guests and therefore expensive. This is similar to Las Vegas. Hotel rates of 300 EUR per night upwards are not uncommon. In addition, we added the Easter weekend, which is why most hotels were already fully booked.

In the end, we chose the Hotel Colony Club Inn & Suites, which is located just outside the centre, but has otherwise received very good reviews on various portals. The price for one night incl. Breakfast was 102 EUR.

We stayed twice for one night at the hotel (see itinerary). Once in a normal standard room, which was very loud and loud. Unfortunately in this room you couldn’t close the bathroom door and it wasn’t clean. A small fridge and microwave were provided in the room. The second time we stayed in a suite, which was a little quieter. There was also a small kitchenette in the suite, but with no cooking facilities – there is only a microwave and a very large fridge. A hairdryer is not available in the rooms as standard. You have to borrow it at the reception. WiFi is available quickly and free of charge. What’s cool here is that every evening there are free drinks with small snacks (chips, nuts) by the pool. Breakfast is available from 7 a.m. and was included in our price and surprised us really positively: there were bagels, toast, cheese, sausage, cream cheese, waffles, cereals and fresh fruit.

The location of the hotel is just outside, but we never felt insecure. From the hotel you can walk in about 10 minutes to the main street (W Bay Street), where there is a bus stop for the local buses. They drive every few minutes during the day and cost just USD 1.50 each way. This way you can get to the city centre of Nassau quickly and cheaply. The hotel is also a 15-minute walk from Ardastra Gardens, Zoo & Conservation Centre and Fort Charlotte.

We used our time in Nassau to explore the main attractions of the city. We’ll introduce you to them a little bit in the next post.