At noon we landed well with Aerolineas Argentinas in the capital Santiago de Chile on the west coast of South America. The entry went quickly and without problems and we say “Hello Chile” 🙂

With the local bus Centropuerto we went to the metro station “Los Heroes” and from there there were still three stops by metro to our hotel. In total, this cost us about 3 euros per person and is definitely a very convenient way to get from the airport “Aeropuerto Internacional Comodoro Arturo Merino Benitez” to the city center.

Bus from Santiago Airport to the city centre

Santiago de Chile, often referred to as Santiago, is the capital of Chile and has about 5 million inhabitants. It is located at the foot of the Andes and is an important transport hub and the most important economic and cultural centre of Chile with numerous universities, universities, museums and monuments. Santiago de Chile was founded in 1541 and is today considered one of the most modern metropolises in Latin America.

Our hotel in Santiago de Chile

Our accommodation Soho Santiago Apartments was within walking distance of the metro station and was located in a normal rental house in the middle of downtown. The apartment was just like in the pictures on the net and is absolutely recommended – and this at a spot price of only 35 € per night.

We chose the apartment because of the good location and the great price. The Soho Santiago Apartments are in a normal tenement house. From outside you can see no sign with the name, only the house number “455”. The gentleman at the reception then called the agency, who finally came – after 20 minutes of waiting – and showed us our apartment. Unfortunately, the lady did not speak a single word of English. We liked the apartment. It is divided into a living room (sofa, sofa table) with fully equipped kitchen as well as a bedroom (with TV and air conditioning) and is comfortably furnished. The free wifi worked very well. Just around the corner is a large supermarket. In 5 min you can reach the nearest metro station. The area is very safe. A great alternative to the hotel!

Since it was already late afternoon, we only shopped in a nearby supermarket, cooked together and updated our blog. We wanted to cancel the sightseeing for the next day.

Attractions in the city centre

Most of Santiago’s attractions were actually within 1 km of our accommodation, so exploring the city with its 6 million inhabitants was very easy. Santiago is the most important economic and cultural center of Chile with numerous universities, universities, museums and monuments. The “Plaza de Armas” – which is located right in the centre of the city and some of the most beautiful historical buildings from the 18th and 19th century houses, such as the Cathedral of Santiago, the old post office and the National Museum of History.

The next stop was the Chilean presidential palace “La Moneda”.

From the palace we walked to “Cerro Santa Lucia” and the Castillo Hidalgo – a 69m high hill and park. This is the place where Santiago was founded in 1541. The access is completely free and you get a great view of the whole city from here.

The funicular at Cerro San Cristobal

In the afternoon we walked to the mountain Cerro San Cristobal. This mountain is hard to miss, as it is located in the heart of the city and is an integral part of the Santiago skyline. The best way to get to the mountain is a cable car, whose valley station is located in the Bellavista district of Plaza Caupolicon. The impact on the funicular was relatively long, but it was still worth going up. Halfway up the mountain, the train makes a short stop at the zoo. Otherwise you can already enjoy the great view of Santiago from here.

The Statue of the Virgin Mary

The landmark of the mountain is the Virgen de la Inmaculada Concepcion, a 14 m high statue of the Virgin Mary. At the foot of the 8 m high base of the statue there is also a small chapel. It was always very sunny and hot – but unfortunately also a bit of a bit of a mess, so it was hard to see the Andes. The mountains around Santiago have a height of up to 5,000 meters and are hardly covered with snow at the moment.

Santiago, like other major cities, is stocked with a large number of churches and museums. But the attraction of the city is the Andean skyline around the city, which we could unfortunately only see to a limited extent due to the weather. We liked the Park Cerro Santa Lucia and the streets around the artistic district of Bellavista with its numerous cafés and restaurants. 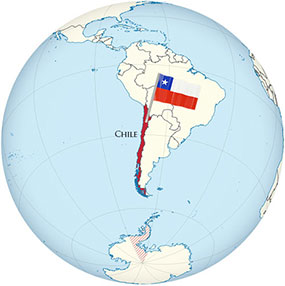